Wow, that’s some low miles, I’m surprised actually, It seems this will suit what you want to do with it, not driving it all the time but having fun on the weekends etc. Certainly don’t see many of these in the UK so Enjoy it!

My secret fascination with the Copen goes back even farther than that - it debuted in Gran Turismo Concept, a stand-alone expansion pack exclusively for the PAL version of Gran Turismo 3: A-Spec, and it has been a staple of the series ever since. If nothing else, it reminded me that Kei cars can be much more fun to drive than you think.

Indeed you’re right, weird game that but fail to see how anyone could not at least enjoy the Pod Race.

They didn’t get the specs quite right in Concept if I remember right, even though the car had been around as a concept since 1999 and did go on sale in 2002 - 4 was the first GT where it was “correct.”

I must admit though while I thought it was a funny car back then, I never really gave it much of a look in GT4. 5 and 6 were the ones where you could go daft with it and what did it for me.

The transporter is minutes away, and in a surprise turn of British weather™ it’s not raining and the sun has come back out. La grande excitation.

Sit rep - needs a couple of bits but it is properly, properly funny. This car is not trying to be anything other than enjoyable, honest to god it is brilliant to drive.

It’s not fast but by god does it feel it, I came back into my town off the motorway along the back roads and I felt like I was doing mental speeds and I was 5 under the limit.

And look at it man!

Yeah, it’s not perfect, there are odd bits of rust but it had the worst replaced before I got it and I can sand these and touch these bits in. It’s been laid up for a couple of years and had a couple of issues I knew about when I got it, the roof is a little temperamental at times and the alternator whines. Well, it did until after a bit of a warmup, I gave it its first excursion up round to 8000rpm and the alternator went completely quiet! I like problems that solve themselves, hopefully won’t come back if I keep using it but have a spare alternator already if needs be.

Seriously, people won’t want to listen to me go on about this car, and I’m aware it’s a cliché these days, but this is such a pleasant, refreshing car to drive. It is not fast, but it feels it, it makes happy turbo noises, the exhaust rasps like hell, it’s an occasion! It’s just fun, and it’s not trying to do anything else. It’s like the slightly mental but extremely eager younger cousin of the GT86.

One really pleasant discovery was the fact that it doesn’t really rattle or shake or feel overly bendy with the roof off, Daihatsu made an effort with extra chassis cross bracing to stop that and you can really tell, I’d go as far as to say this does just as good a job of keeping it to a minimum as a Mercedes SLK a friend had a couple of years ago, if not a better one.

I’m sure there will be stuff it needs, there always is with cars I buy it seems but I took that chance buying the cheapest one in the country unseen. I haven’t had a car since the GT86 where upon buying, all I did was check the oil, stick 15 quid of Shell’s finest in and just go and drive aimlessly for a couple of hours. It is just awesome and hopefully with a bit of servicing and use it’ll stay that way.

64hp has genuinely never been as funny.

i love the red seats and the absolute circle of that car.

This car has one of the most frustrating oil filter locations I have ever seen.

The JB engines were fitted to a few cars that all had one thing in common, a top mount intercooler - all except the Copen that is, which has a front mount. This means even with the grill removed, access to the oil filter is here:

I have fairly slim hands and could just about get my hand in here, scraping hell out of my arms on the side of the intercooler, and certainly feck all chance of getting tools in there. You can remove the air filter box/intercooler but that requires removal of the front end first, not a major issue but one I didn’t really want to have to do. Now, this is only usually needed if the wrong oil filter has been fitted previously and fortunately here I could just about make out that it had the proper one fitted, look how tiny and cute this is for an oil filter man.

Now you’re probably thinking, why are you being a dickhead, just go underneath?! Well, yes, that too works, except there’s a massive engine mount right under the filter. On the Copen Daihatsu have helpfully put a small hole in the mount, just big enough that you can get this tiny filter through - sideways - a 68mm filter wrench and the relevant ratchet/bar. Not really your hand though, not in any way you can contort it to be useful.

Unfortunately for me, the previous person who put this filter on did so with the strength of the Hulk or something, as it was well over tightened and had a dent in a couple of the outer flutes, meaning my wrench just slipped over it. I tried various combinations of tools and eventually won by jamming a small sheet of sandpaper into the filter wrench, then using a big extension through the front of the car in the gap above to eventually succeed. Have a picture of success, via said gap:

The previous oil filter was quite clean, as was the oil, but as it came with no history and appears to have a very shiny new turbo I didn’t want to take the risk of just running it as is. Even the Daihatsu manual makes it apparent how little room you have to move things around. 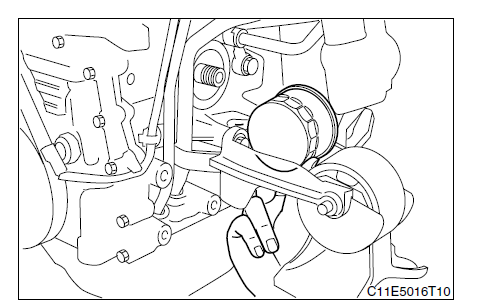 In other news away from evil oil filter locations, it seems to be OK. Still has that little bearing noise from what is still assumed to be alternator but it’s improved with use, and goes away entirely when warm. The roof seems a bit happier after a bit of use too (touch wood).

Some boring stuff coming up now like trying to sort a spare key and fob for the aftermarket immobiliser, getting the aircon looked at to see where it’s leaking etc. but then hopefully, I can start sorting out some things to do with it as car events start to appear again and I can see some overnight parts from Japan in it’s future for sure. This whole thing of doing nothing for the top third of the rev range doesn’t sit right with me just to restrict it to 64hp.

They’ve had to try so hard to do that - the air filter has the tiniest air feed, will take a photo at some point, the turbo exhaust ports are teeny tiny, and it still seems to drop boost and retard the timing once you hit 6000 so it stays at 64hp. Dyno plots are so weird, just goes totally flat and it just feels all wrong when you’re driving and you hit that point. Definitely a lot in it but then, there’s a hell of a scene for them over in Japan and I’m not surprised, it definitely has a lot more to give.

Oh, and I’m quite enjoying that my current stable is looking something like a bad start to a Gran Turismo playthrough.