It is nice knowing that more enthusiasts have ceased to senselessly bash front wheel drive without considering its potential benefits (not to say it should replace RWD as many claim I’ve said, but both have their places). So, after work on the fourth of April, I got home and swapped back to my gold wheels with the “Summer High Performance” tires, as my aim was to go out and have fun on the Angeles Crest Highway.

I lugged my APS-C camera, and three lenses: ULW, Standard, and Telephoto. I enjoyed the scenic drive with the car in ‘Sport’ mode (Traction control disabled). I came to a rest at my usual spot for catching people also out to have fun on the road, spent an hour practicing on those who drove by. The highlight had to of been the Subi owner who gave me the bird.

I pack my equipment up, secure it in the car and proceed to drive up to Newcombs Ranch (Elevation 5,400ft) get a bite to eat and start my way home. Now I normally limit myself to only 10 over the speed limit of the road, there is ample room left for emergency maneuvers with this vehicle at those speeds. However today was different, when I turned onto Upper Big Tejonga the motorcycle that had caught up to me followed. I sped up to my normal cruising speed and he in turn kept on me. After a few corners and noticing that he wasn’t losing any ground it was time to let him by, I know that when I canyon carved on my motorcycle it was always a welcome occurrence when a ‘cager’ would make room for a safe overtake.

This is where I story takes a turn, the rider did not overtake, he instead motioned for me to go faster, and in an error of judgement, I did. Now you see I am very firmilar with the ACH and its connected roads, so I had confidence, and a pent up desire for some speed. Speeds approached a figure which my attorney advises I do not repeat, and the rider was on me like white on rice (a ‘safe’ 2 car lengths) All was well, I was having a blast, and as the rider told me later, he was having a blast. But going round one of the corners on off throttle the rear of the ST decided to hang out, followed shortly by the front tires reaching their limits of adhesion. For the first time I was four-wheel drifting, it felt like an eternity, though I know it only lasted a moment. If I had to guess I slid for 40-50 feet before gentle application of counter steer and light throttle had me corrected and brought back to the realm of traction. I noted that figure, that feel, and dialed it back a few degrees for the rest of that jaunt. We talked for a short while at the next stop, and went our own ways. The rider had a go-pro, perhaps my foolishness may windup on YouTube, though I hope it does not.

Now, I to not condone what I did, it was foolish. One should never drive like that on public roads, no matter how empty they may be. This is the second time in all my years driving I have given into such lower impulses, and will continue to resist them in the future.

But holy shit is this car fun. Focus ST in its natural habitat it seems!

Have you tried the actual [smartass]drift[/smartass] mode?

That’s the ST not the RS. ST is FWD whereas the RS is AWD and can send all power to the rear.

good catch, I clearly missed that

Focus ST in its natural habitat it seems!

Have you tried the actual drift mode?

As Ram pointed out, the ST is the FWD 252bhp variant. An incredibly fun car, what always gets me is the visceral torque down low that this 2.0 has. I mean come on. More torque than HP I’m still stock but this thing makes 270 ft/lb @ 2500, and with just a tune, people are boosting that to ~330lb/ft @ 2500, but only gaining a little bit of HP on the top end (small turbo)

I’ve considered getting a tune, but I’m going to wait longer, the damn thing is fast enough.

Dyno of what the avg tune does to the ST, for fun.

Time to be vain! From the latest evidence, I reckon that a remap for your Focus ST would be worth it - it should add a bit more straight-line pace without overwhelming the chassis.

From the latest evidence, I reckon that a remap for your Focus ST would be worth it - it should add a bit more straight-line pace without overwhelming the chassis.

Do you even torque steer?

i like the rims they contrast with the white nicely. is it steer and throttle by wire? if so my friend has a new focus or fiesta it made me nervous when i found out at 80 mph.

By law, there has to be a mechanical steering component. You lose your gas pedal, you can slow down and stop. If you’re steering by wire and the system fails while you’re headed for a cliff, you’re screwed.

This was a month ago, but I got it very dirty going to El Mirage 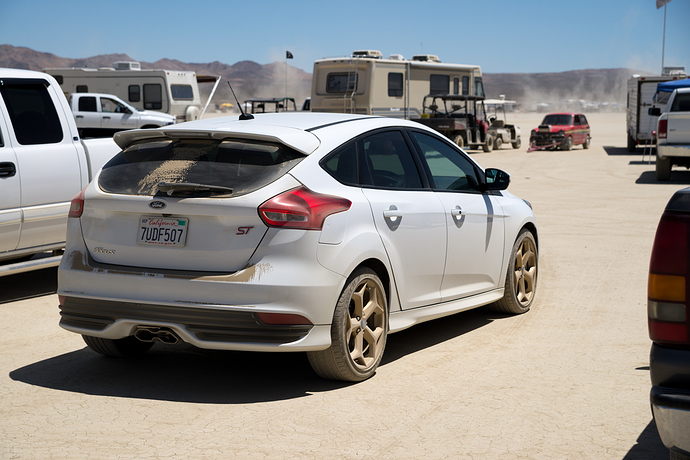 Here is my baby. Isn’t she a beauty? 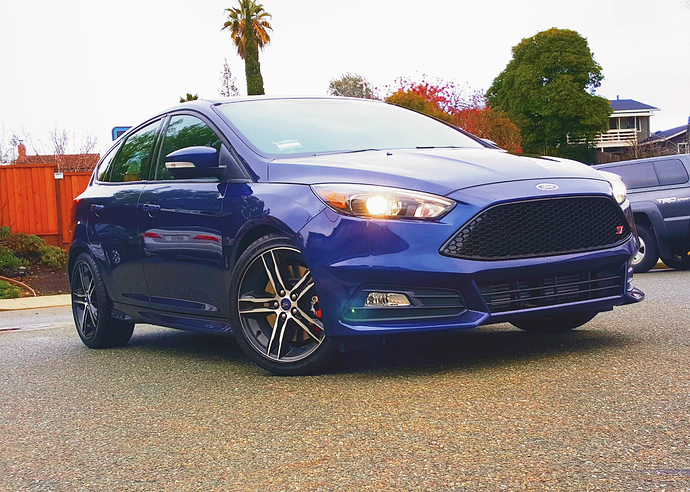 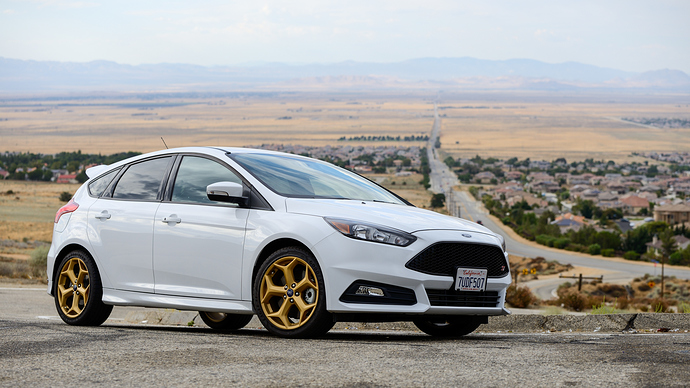