$52k is quite something indeed. How they achieved that is another question.

The base Ginmei is $52k haha. The high performance 38RS is at a different level of pricing!

…hang on, I can’t really review my own car now can I?

The Erin Tauga SB is the best car ever made, ev…ok that’s enough

9 am, sunrise over Lake Geneva and debut of the newest Zenshi Grandea GT-R.

@Grandea As usual, Gavin cocks up

AL Autos Annoucement! (Updated 4:36pm [3 hrs after post made] due to modified list of cars and formatting issues)

Hello one and all! AL Autos would like to announce that we will be bringing a total of 12 models to our booth in the 2017 Geneva International Motor Show!

and 3 other mystery vehicles that we will keep to ourselves until the auto show opens up to the public!

Hope to see ya’ll soon when the doors open to the public!

#Iuraro Atelier
is proud to present the latest incarnation of the Teodora. 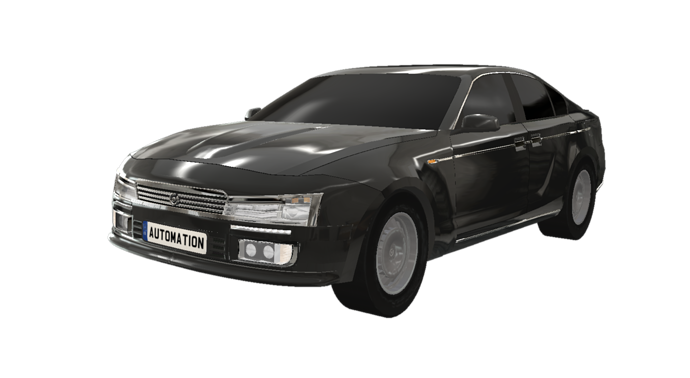 Iurlaro Teodora - 6.0E Diamond Personal-3.png1623x891 457 KB
With this model year 2017 and this exclusive Diamond trim, we, as Iurlaro Atelier, have reached a peak of comfort that was unthinkable until today thanks to the effort to optimize and fine tune every single aspect of the car.
The quality you enojy it is even more of the one you can percieve. A lot of this constant improvements will be unvailed to the customer only after constantly be the most important part of the car itself: the passenger. 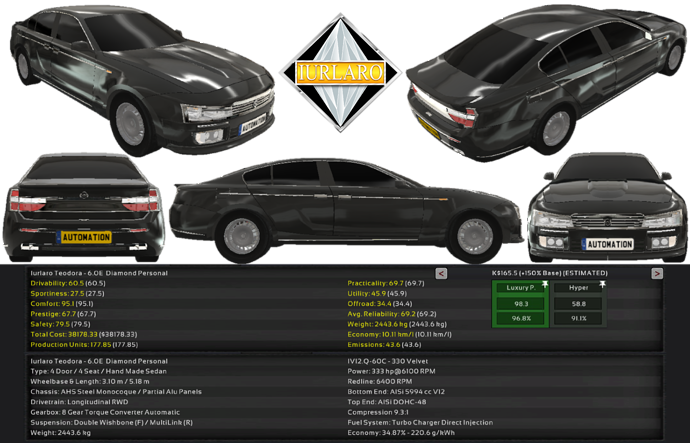 Iurlaro Teodora (MY2017).png1494x960 879 KB
Here depicted the 6.0 V12 biturbo trim with the hand crafted interior, focused on the driving pleasure. More variants will be available in the brochure, starting from the 3.8 liter inline 6 to the 7.2 liter V12 with more than 600 horsepower, from the special lightweight full aluminium body to the armoured personal luxury long wheelbase version.
#Enjoy the personal unique luxury of Iurlaro.
Dorifto_Dorito 2017-03-07 22:25:46 UTC #117

After a great start at NAIAS, EADC expect that Geneva will just be as good!

Be sure to look out for some new and old EADC cars around in the upcoming days.

Just in case you forgot about us, were still here and we’ve got lots more cars to show you.

Remember the Chevalier II and the Traveller II? Using the feedback gained at NAIAS, our engineers have improved them and fixed many issues found and are now ready for sale in the US and most importantly in Europe too.

In addition, since OAM’s Heavy Vehicles Department didnt get much coverage at NAIAS, were relaunching our pickup trucks new and old at Geneva.

Also watch out for the new Phoenix III being launched too. All that to look forward to in the next couple of days!

Ok, it is press only day here at Geneva, So we at Galt decided to give some more information. Some of you may have been wondering why the 2016 Riviera was still being sold this far into 2017. Well here is your Answer, the rumors are false that the Riviera is cancelled, instead, we were working hard on a whole new platform for 2017. It is Sleek, Fast, and aerodynamic, and the numbers prove it, all while remaining Rear wheel drive. I managed to convince the higher-ups to reveal a production base model to you guys today. 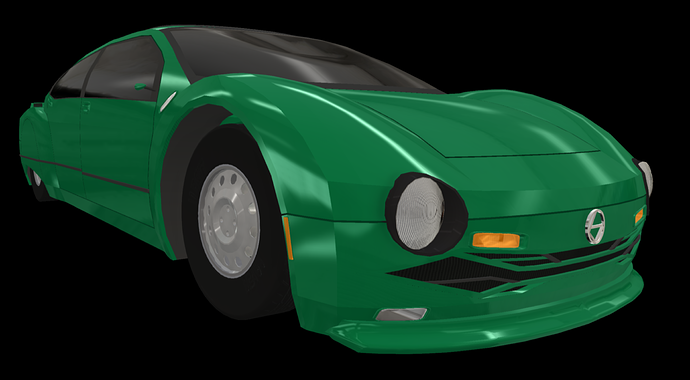 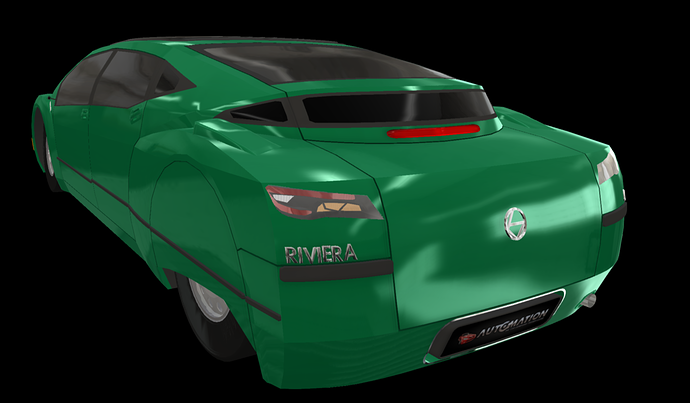 Car -12.png1991x1165 661 KB
As you can see, this definitely is the base model. I wasn’t allowed to disclose the Engine yet, However i am allowed to open it up and reveal the starting price. As can be seen, even the interior screams base model, a lot of generic cloth and Fabric, a manual Transmission, yadda yadda yadda. However this does result in a low starting MSRP of only $14,520. Now in closing of this announcement, There are two things I can say. 1: Those cars you have been seeing being transported or sitting behind Galt dealerships with all those Tarps over them are indeed these new Riviera’s, they Will be ready to be sold as soon as we do the official reveal for the Lineup. I cannot say in which order it will be revealed though. The 2nd thing i have to say is yes, this is the Platform the Fiend is on, It’s official name is the Riviera Fiend
stickmaster62 2017-03-07 23:21:55 UTC #120

With the introduction of the MS Argonaught, Emperor Emerald, and Emperor K series, MAC gives you the MS R55 LMP concept. It comes equipped with a 5.5L naturally aspirated DOHC crossplane V8 sourced from the MAC 56L8 V8 that produces 816 HP, propelling it to 60 MPH in 2.5 seconds. Equipped with a carbon fibre chassis and body, and pushrod suspension in both front and rear makes the R55 a fierce competitor. 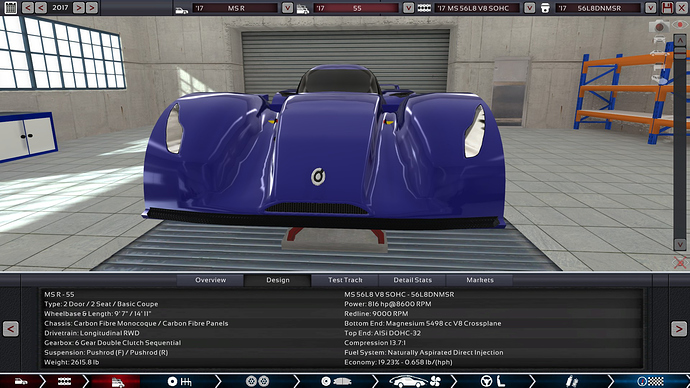 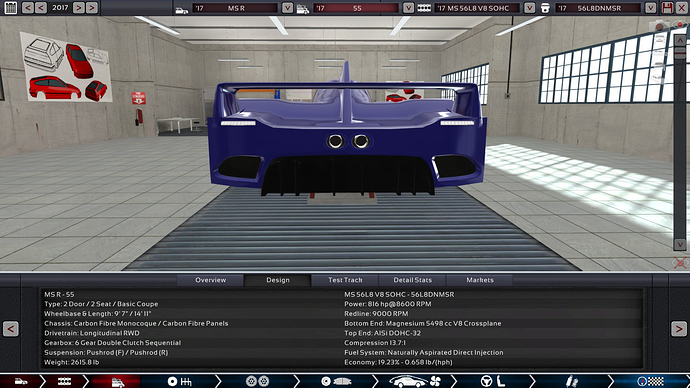 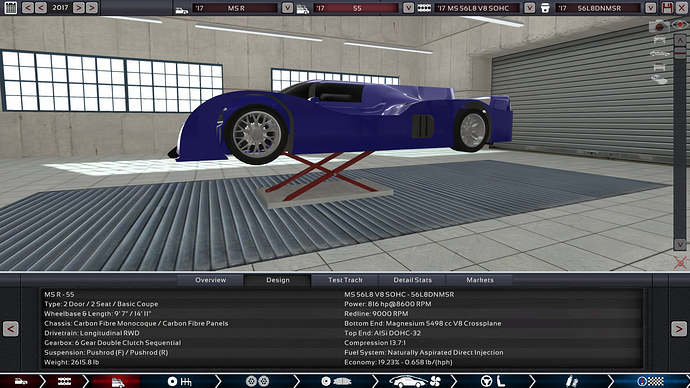 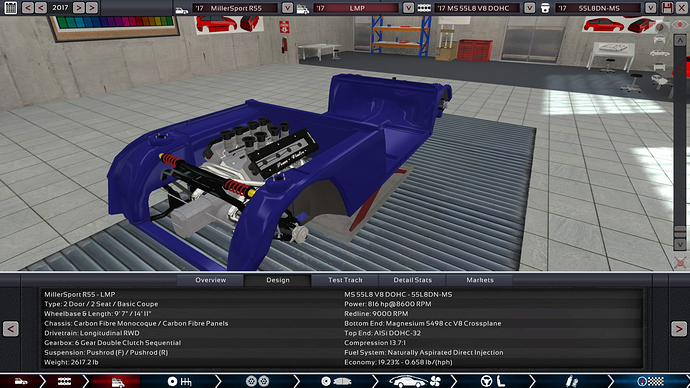 As of right now, there is no decision of whether or not MAC will compete in any WEC races.

A mid-engined chassis, with a small, 220hp Inline 3 engine at the heart.

We took our liberties, pushing the boundaries away from the current ideals, and went back to what made these cars enjoyable.

Lightweight, affordable fun for anyone involved.

Pushrods front and back, and full aluminium within, this puts the weight at slightly over 930kg. With a 220hp Inline 3 at the core, she is a fun and maneuverable weapon. More indepth information soon, along with some more angles.

An advantage by technology?

Audi is that you?

you’ve posted a DOHC, not a SOHC, you donut.

A txt from DSDR Ceo Noble Romeo to Gavin.

Gday Gavin mate hows the Alpine weather?
Just a quick question. We have a couple of our French customers heading to Geneva this year and are huge fans of yours, they have asked DSDR if there is anyway that we could perhaps setup a meet and great? They just want to have lunch with you and maybe have you drive thier cars? One owns a DSDR Maesima 384, and the other owns a modified historical Erin that was purchased feom DS5.

The other question I had for you mate was, before everyone packs up DSD would like a photoshoot with all of the sub 100k sports coupes in the same categorie as the 'Toga and a photo of all the super mini/city cars?

May EADC join in? We’ve got our classic rally cars hanging around, with not much to do…apart from having some fun around the Alps. Think of it as a joint fan meet up for two companies so enthusiasts can share experiences and drive around in each others cars.

We’ve even brought along our main driver for WRC, so he could take fans for a spin in some of our cars. Under the bonnet, expect a development of the current model’s 2.0-liter i-VIC TURBO with a redline of 7000RPM delivering up to 310HP/410Nm via a six-speed manual transmission, which should see it lower its 0-100km/h time to 5.4 seconds and raise its top speed to as much as 275km/h.

The new Type-R also claims to lose as much as 50kg and a more rigid chassis to handle it hardcore performance , only available in FWD.

To U.S buyers , Saminda has confirmed that it has no intention in selling the Type-R in the States as the C3 Spec-V is already competitive over there and is uniquely only for the U.S market.

Thank you for your requests on these ideas, you’ll be glad to hear I’m interested. I’m tagging in the editor of S.A.M. and the general email for the auto show crew to keep them updated.

So what are we thinking here? Schedule an afternoon to go and do stuff basically? Start off with some lunch and then head out for some driving perhaps, the DSDR fans and EADC crew can all meet up with the cars and then we’ll take it from there.

I already have a day of driving some EADC rally cars booked for next week, so this will be a chance to drive some more of them and even give the fans a chance too. Either way, I’d be very interesting in doing some writing for this.

Regarding the photoshoots; I’m assuming you mean the ‘Tauga’ when you say ‘Toga’? While I’m keen to get a go in that, I don’t think its quite in the same league as the sports coupes we’ve seen released at the show so far, though I am very interested in doing a photoshoot with them if Miller, Grandea and Garou are too.

With the supermini’s and city cars, would that just involve the ones released at this years show or the ones currently availible on the market in general?

I look forward to all of this!

Correct me if im wrong, but I think @Darkshine5’s talking about the Saratoga