Yeah, I really liked the Espada Veloce, I am certainly thinking of buying one myself, but for the review’s sake, it’s just a shame that the car was just really expensive. I would certainly put it on my list of top cars revealed at Geneva this year!

With the New York Auto Show not starting until September, perhaps anyone who missed Geneva would be interested in showing new models at the Shanghai Auto Show?

Brilliant review! Sorry I’ve been so slow to reply, I’ve had a busy 24 hours

Definitley seems to me that the Espada is way more performance focused, it’d be interesting to see how a performance-tuned version of the Berlose would do up against it. That’s for another day though

But, in that respect, it’s a fantastic car @szafirowy01 and I was certainly impressed at the higher stats than the Berlose and the styling.

Thank you for the reviews @Dorifto_Dorito!

@abg7 Ah! Good point, forgot about that show. That’s definitely something to plan ahead for.

@Deskyx I’m think of Paris. Thanks for clearing that up!

Geneva at the moment has gone back to normal. But Gavin is still here, for one last test at this year’s show.

“My oh my. It’s quite something to behold, isn’t it?” I think to myself. I still can’t believe that I’m actually looking at thisw thing. It’s been teased, speculated, almost revealed and revised, but this actually is the real Saminda C2000R.

Almost. Saminda still haven’t quite given me the full car. Instead, we have the special version that set the Nurburgring record for a hot-hatch last year. Just your usual roadtest then.

Of course it isn’t. Most of the automotive world has been waited for this car, and I am one of those people. Meaning that when I settle into the bucket seats and put my hand on the steering wheel, I simply cannot contain my excitement. The man beside me in the passenger seat is an anonymous driver for Saminda. He’s been tasked with getting this car to Chambéry Airport for its flight back to Japan. The security around this car is so tight that they aren’t using Geneva International, which is actually next to the Palexpo and is far more convenient.

I’m not complaining though. He’s letting me drive this thing for a short part of this drive, and that’s all that matters. I don’t even mind that it’s 2:33 am and absolutely freezing. I start her up - wow - and the noise is just electrifying. Weird, because it’s a standard hot-hatch power unit in the form of a 2.0l i4. But there’s something about this one that is a little more exciting. I taxi the car slowly out of the parking spot and we head straight for the French border.

Something about the danger of this just makes it a little more exciting. Yet the car itself also feel dangerous; you have to be ready when the turbo’s kick in, it’s like being hit in the chest with a bowling ball. They spool up at 3500 rpm, surprisingly low given the 368 hp this engine delivers overall. Needless to say, you really can feel it. Combined with the RWD system, the C2KR is good for 0-60 in 4.0s and a top speed of over 180 mph.

This is, it should be stressed, is not the final production version, but if the final version is anything like this car, I’ll be satisfied. We blitz through France towards Bellegarde-sur-Valserine, before turning off onto the D991, a twisty route that follows a river valley down to Chambéry. Excellent.

The C2KR is, in short, sharp. Very sharp. Razor sharp. It feels more akin to a race car, responding absolutely immediatley to any input you give it. But it also feels alive; there’s a lot of electric gear on this car, most of which I “can’t know about just yet” according to my accomplice, yet it doesn’t feel like a laptop. Rather, you get the impression that the whole car is working to stop you from crashing, which you are constantly aware that it is very capable of.

Dab the breaks - you do not need to work them very hard - drop a gear and flick the wheel, and you can very easily get this thing to slide. It’s not always keen to do that, thankfully, and can be tamed with enough skill. On the occasional switchback corners of this road, you’re able to fully appreciate how lively this car is, and thus just how much potential it has.

It’s also absolutle solid through the corners. The suspension is hard, to say the least. Not rough, it’s been tuned well and adjusts itself almost constantly thanks to its electronic parts. But that rock-solid feel allows it to corner almost flat every time. The grip too is astounding, but not without its limits, and the sooner you learn that the better.

The impression I really got with this car was a need for skill. Taming it isn’t too hard, it’s using it that really challenges you. But that challenge will be exactly what makes this car a success - at least we think - when it goes on sale.

We arrive at Chambéry Airport, and my first time with the C2KR is over. The car is quickly whisked onto the apron and into a cargo plane, almost looking more like a military operation than just car transport. And that’s it, the car is gone and I won’t see it for some time now.

But if you are wondering, and I’ve a fair bet you do, yes, the C2KR is just about everything you’d expect it to be. Lightning fast, slightly terrifying and masterfully well made. I’ve no doubt that it’s going to set the automotive world alight when it arrives, whenever that is.

@Deskyx I’m think of Paris. Thanks for clearing that up! Geneva at the moment has gone back to normal. But Gavin is still here, for one last test at this year’s show. [image]

#Final Round of Voting
Well! They always say you never can tell and this is just such a case. There are no less than 6 cars that are tied with one another in the top spots, and we can’t really just pick one winner from each group now can we? So, the final vote will be between all of these cars.

Same rules once more etc etc, you have until Saturday 25th March 2017, 18:00 GMT to get your votes in. And at last, we’ll be able to announce this year’s best in show.

Win or lose, I’m happy about my car being featured in the top 6

And I wonder who is the one that voted for Espada, since surprisingly that wasn’t me

But ain’t nobody got time for that, I’ve got too many ideas with too little time.

Edit: too bad one of the car I voted for isn’t in the top 6 (Monolith M161), and the other (Erin Tauga SB) doesn’t seem to have a chance for the win too. Good that the third car I’d vote does much better

@doncornaldie Yeah, you really ought to be proud of that. It’s such a mad car, fully deserving of that top 6 position.

@szafirowy01 Can’t say it was me either, though I haven’t voted in any of these polls anyway. Nice to see that you have three potential cars to vote for though, I like to see broad appeals for automation creations!

Ladies and Gentlemen, it gives me great pleasure to announce that the winner of Best in Show at the 2017 Automation Geneva International Motor Show is… 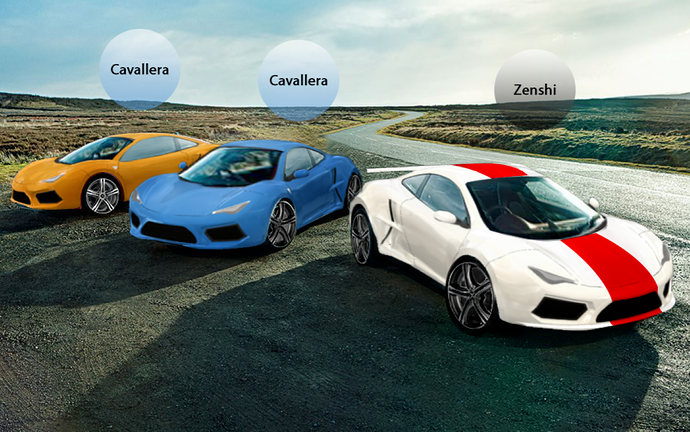 Who’d have though it then. The last car to be revealled at the show, after a particularly strong showing this year across the board, is crowned Best In Show. A joint venture between two like minded companies to create a Japanese honed mid-engined masterpiece. The Seiryu is a car that evokes a level of passion that is truly admirable and is shown in every aspect of the car. At once, it is both cutting edge and soulful, modern yet familiar, traditional yet also someting new.

Within its tidy styling and light-weight construction is a car that we’re expecting is going to reshape the mid-range sports car market. Following a wave of new releases in this sector from multiple companies, the Seiryu has shown itself to be the public’s choice (for now at least) and could well be said to be the best in this class at the moment. We’ll only truly get an answer to that when we can get a roadtest in it.

For now though, the Seiryu deserves to be celebrated for its achievements and should be allowed to bask in its appreciation. Geneva 2017 has shown that the essence of the sports car is still very much alive and kicking, and more than anything else, the Seiryu is parading that essence with pride.

Congratulations @ramthecowy and @Grandea, can we expect a full stats release for the Seiryu in the near future?

Thank you also to everyone for making Geneva 2017 a great success. Commendations to @titleguy1 for starting this thread, I’d like to thank you personally for giving me the honor of covering the show. And I can only hope that you’ve enjoyed Gavin’s writing and his escapades as much as I have.