That’s why I suggested race safety, though I think that everyone saying it would be broken has a good point.

I can imagine that it would be tough to get safe racing. The LM056 I made isn’t entirely easy to handle in BeamNG(though the handling in that game feels really weird at times, atleast compared to games like Forza where cars behave much more realistically) and I can easily see a bunch of crashes.

84 Years since the founding of Hades Automobile, and 70 years from the first production Hades.
2018 Marks a special year for us.
For this, we have something to show. That, however will come later.

For now, we have 3 influential models from the Past of Hades out on display.

Entered by Étienne Laporte’s Son, Hugo Laporte into many Touring events from 1951 to 1956. The most famous of these was the 1952 Corso di Fruinia event.

The Car was a slightly modified V16, with much of the lavish interior removed, and a non-standard paint scheme applied.

It was less than a competitive racing machine, as it faltered to the same issues as the road car. However, it resides in the Hades Collection

The Lethe was a spectacular vehicle for its time. This vehicle put Hades into the more public light, with an automobile going much faster than any before it. Reaching an astounding speed of 433km/h just weeks after being shown at Geneva that same year.

The Lethe is not the most beautifully designed automobile, however it is functional. The Airbrakes on the rear assisting in slowing the vehicle down once it passes 250km/h.

This example is Lethe Number 1, the vehicle that set the famous speed record back in 1986.

Our Third presentation vehicle will be shown soon, a commemoration of the first Hades model produced, and a sneak preview at the next Hades model. Stay tuned.

In 2015 Mosport introduced an even crazier version of the Poseidon, one powered by a 9.7L twin-turbo V16 to replace the “modest” V12. With the engine producing 1156 hp and 1172 lb-ft of torque, the Poseidon V16 will sprint to 100 km/h in 2.2 seconds then go up to a top speed of 364 km/h. While it’s no top speed record holder, the Poseidon V16 will shine on the track. Its current track time on the Nürburgring is 6:52.68, putting it in the prestigious sub-7 minute club. This also makes it the fastest Mosport ever built.

Construction wise, the Poseidon V16 has not changed. The chassis and body are all carbon fibre and it has pushrod suspension on both axles. The aerodynamics have been improved, with a large wing and splitter being the obvious changes, while the interior has been stripped down some to reduce weight.

This example of the Mosport Poseidon V16 is currently up for auction at a bargain price. This is your chance to own a piece of Mosport history today.

This entry to the 2018 Pebble Beach Concours d’Elegance is really just a taster for a new company I will be rolling out soon, so if you like it be sure to be on the lookout for a new company starting up. I’ve been building a lot of cars for it, but I need to get some actual lore and writing set up before I start rolling cars off the assembly line. Anyway, on with the show!

This was my first real attempt to get creative with the fixtures while maintaining an elegant design. Aside from the NSX taillights and wheels by I502K1s all the fixtures are stock. I think I did a decent job, but I’d be happy to get feedback, whether on this thread or in a PM.

Nice car, not a fan of the headlights though.

Thanks, I agree about the headlights. After doing the rear end the front looked kinda stock, but I don’t know what I would have done. Like I said, I tried sticking with stock assets, so it made it more of a challenge. I would have liked to create some sort of recessed square lights, but I don’t know of a good way to accomplish that without mods.

A classic 1964 Rennen Bellezza Futura Concept will be showcased at the 2018 Pebble Beach Concours. 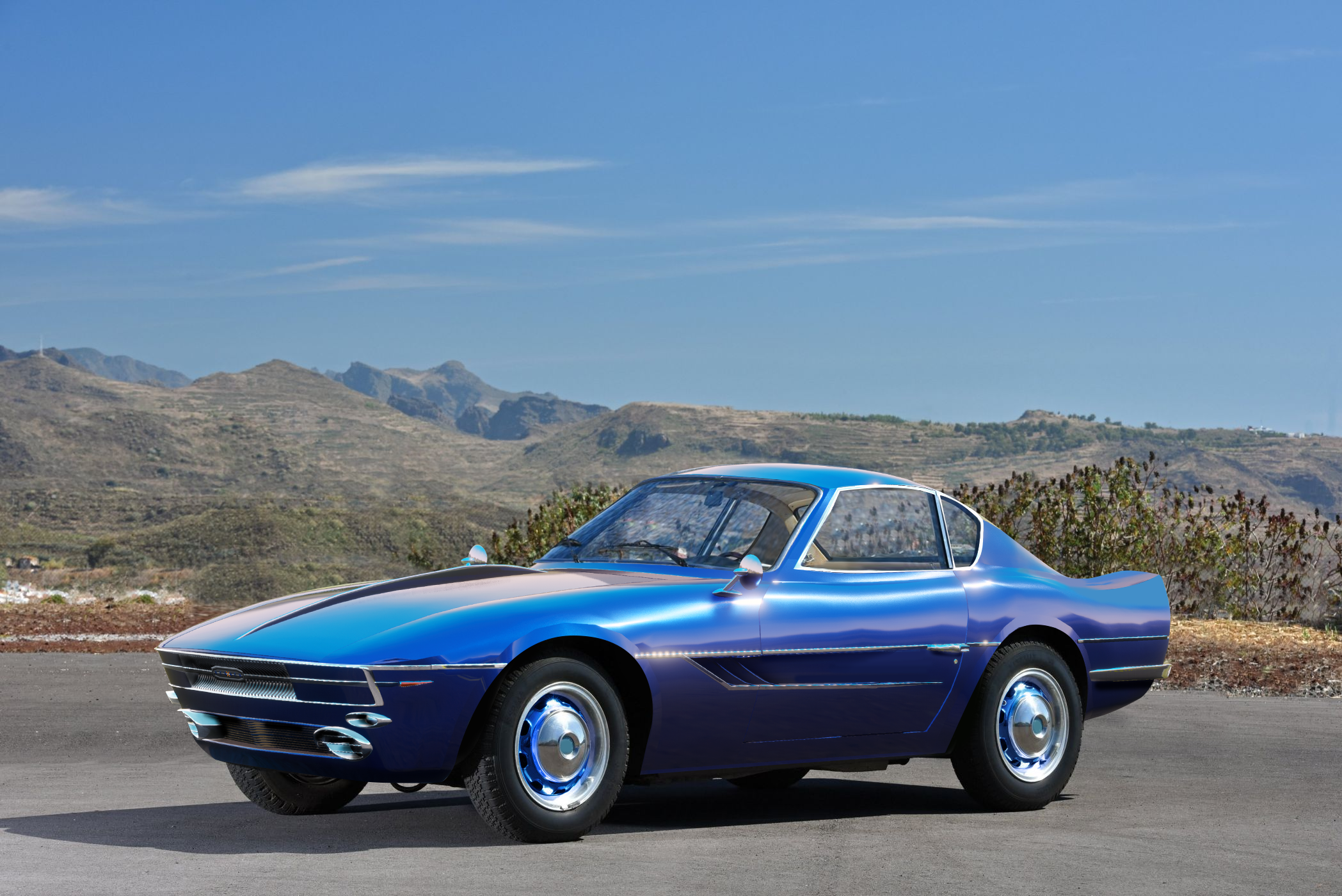 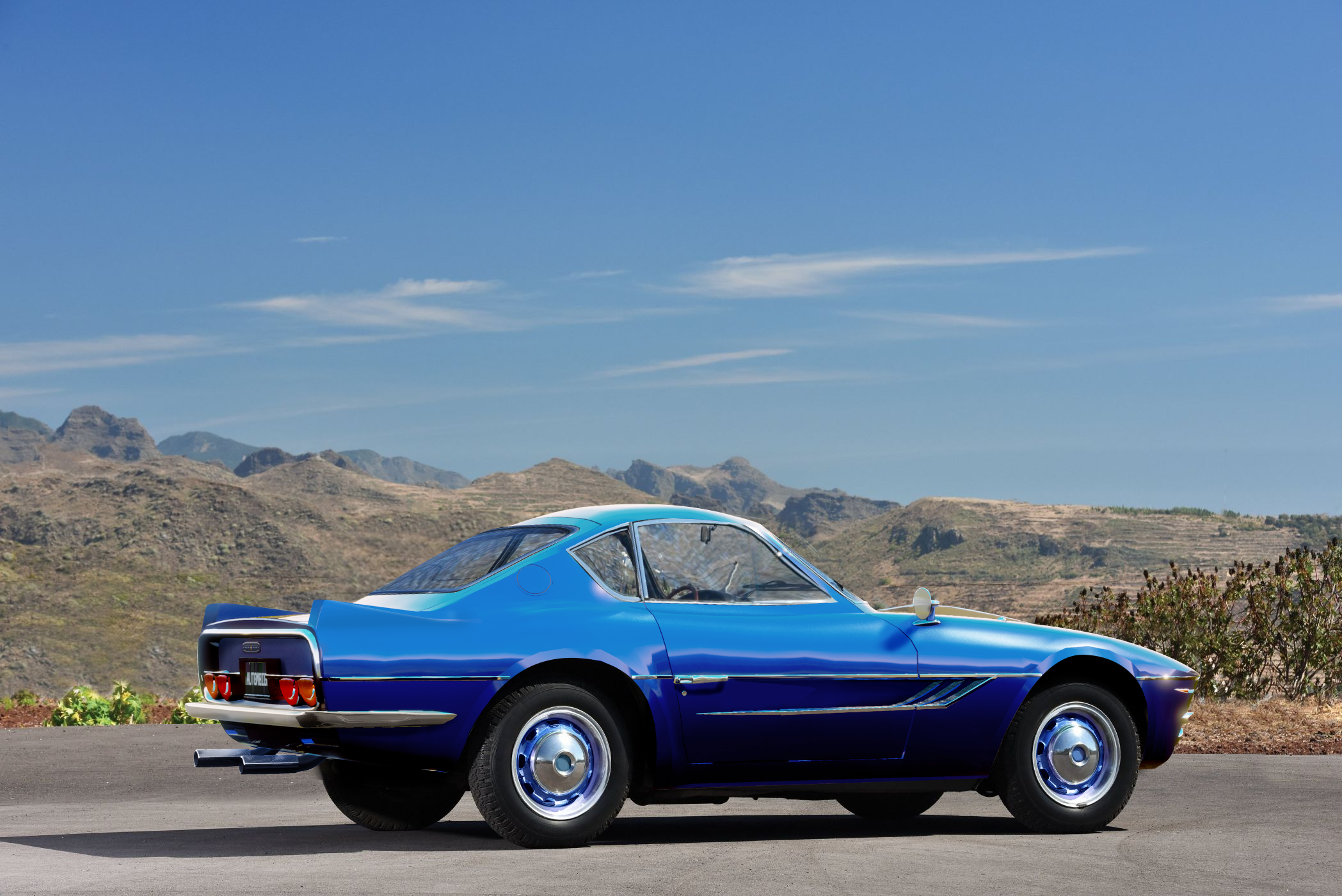 More information on the vehicle can be seen in the Rennen Historical Collection.

Brief showcase of what can be found at Raymond Automotive’s stand. 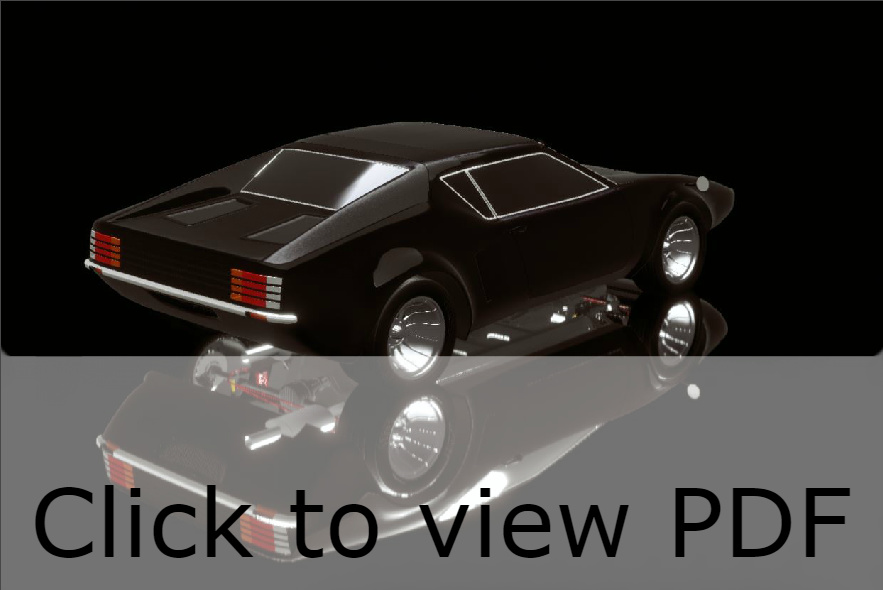 Vexata Motorwerke
To mark the 60th anniversary of Vexata, the company is bringing two cars to Pebble Beach.

Find us in the concept car section to see the Nordwand in person. 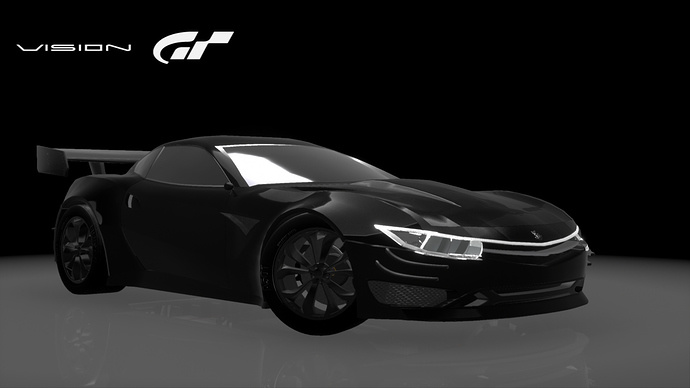 An all electric race car with 1300 Horsepower, Shromet sources say the dragon VGT has been “A great source of inspiration for the 2019MY Dragon.” Though how much they drew inspiration, and whether or not the production dragon will be an EV is unspecified. Click the Image for more details.

snippetrear.jpg1701x777 164 KB
Turbina’s first proper sports car, the 1955 Torpedo.
Pushing 427 ponies and 462 torques all to the rear wheels from a 6666 cc V12 made from two bolted-together inline sixes, it sold surprisingly well and Turbina’s factory couldn’t keep up. Only 93 examples were completed until it stopped production in 1957. The Torpedo wasn’t revived until 1966.

Chassis 000 will be appearing at this year’s Concours d’Elegance.

A day prior to the main event at the Pebble Beach Concours d’Elegance, Rennen unveils the Bellezza Futura Tribute Concept. 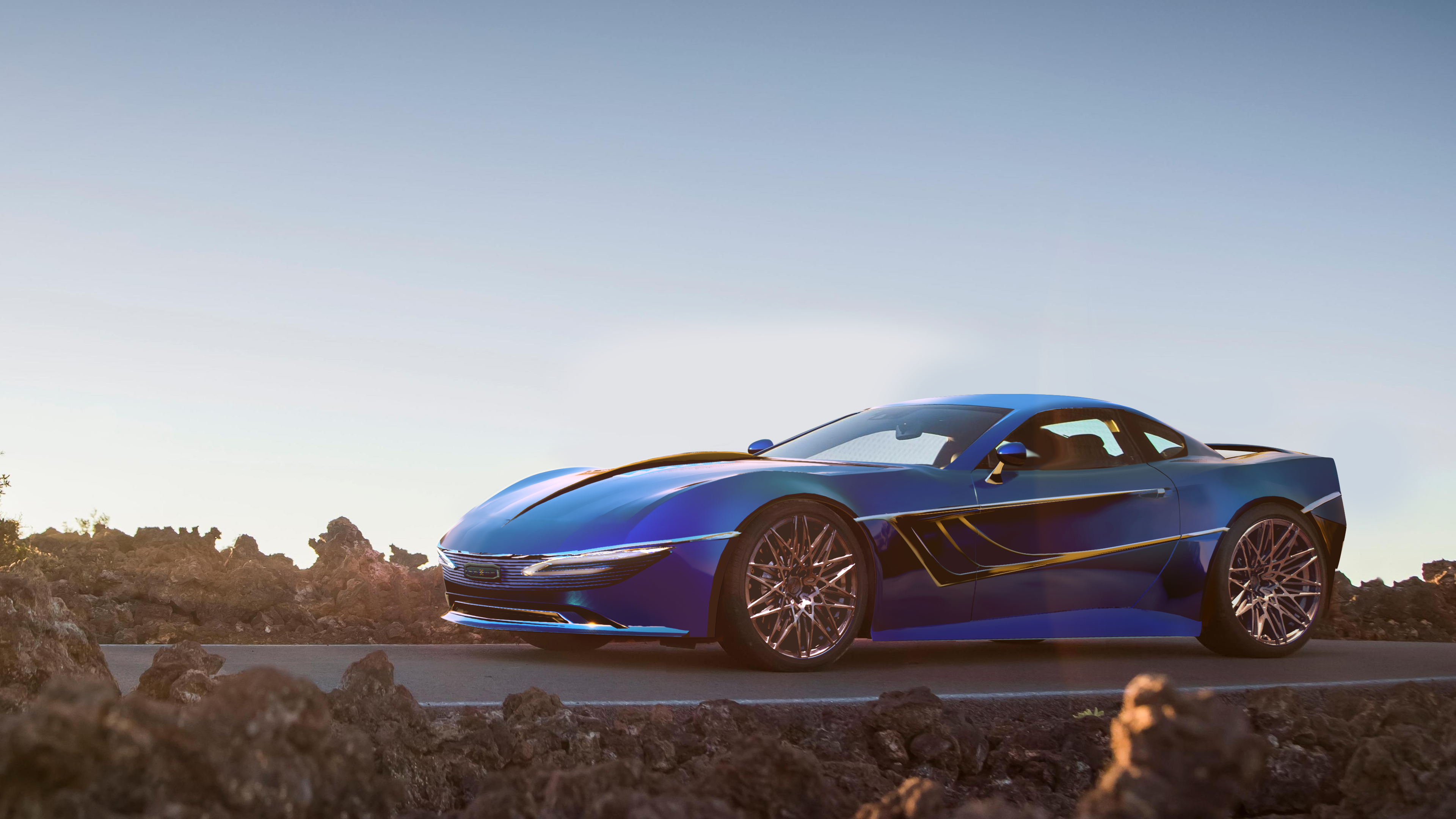 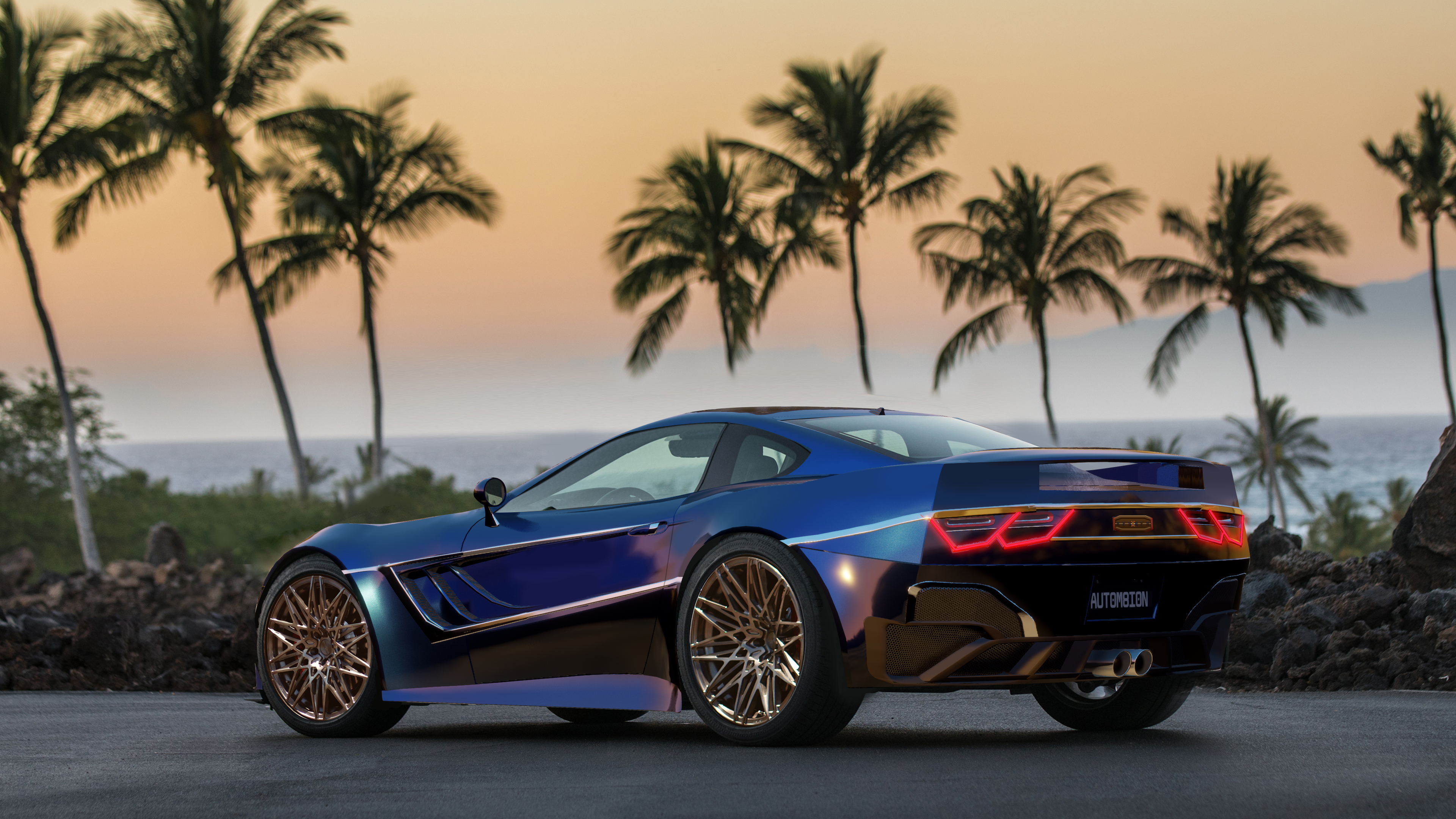 More information on the vehicle can be seen in the Rennen Automotive Thread.

This is the latest generarion of the TSR Kansai.

The TSR Kansai is now on it’s 5th generation. The latest Kansai is now using a lightweight carbon fibre unibody to reduce weight. It also uses a new low drag and aerodynamic body to decrease fuel consumption and to make it faster. It is also more beautiful to look at. The GT is also equipped with the Matrix design wheels, they will be in future passenger vehicles , that will surely attract people. With a newly designed 4.0 litre turbocharged Inline-6 producing 517HP in the GT (and can do 26.5 mpg) and the new top-of-the-line V8 found only in the NR5 models (naturally aspirated 5.3 litres for the Enthusiast Edition, turbocharged 5.0 litre for the Spec B and turbocharged 5.5 litre for the Spec A).

HighresScreenshot00342.jpg2071x1079 657 KB
It is basically the GTS with all wheel drive and a more powerful engine producing 648HP. It is also the heaviest. But still, it is faster than the GTS.

HighresScreenshot00343.jpg2071x1079 622 KB
This is the top of the line Inline 6 version of the Kansai. It produces 683HP. It also only have 2 seats in the front instead of the normal 2+2 seating arrangement.

HighresScreenshot00380.jpg2071x1079 738 KB
This is the mid-level Kansai. Although it’s less powerful than the Spec B, it has a naturally aspirated 5.3 litre V8 producing 701HP. This is as far as the engine can go naturally aspirated. It is also equipped with a 7 speed manual gearbox.

HighresScreenshot00381.jpg2071x1079 669 KB
This is the top of the line and the most track-focused Kansai ever made. It is equipped with all wheel drive and has a turbocharged 5.5 litre V8 producing 815HP.

Designed to celebrate 70 years of Hades Production models, the Elysium is the peak of Hades design and research. With Aerodynamic advances and technology taken from Prototype and Formula Racing, the Elysium is designed to be striking in every fashion.

The Elysium in it’s current form features a 4L Twin Turbocharged V16, sending all 742hp to the rear wheels. This allows an aero limited top speed of 332km/h, and a run to 100km/h in 3.1s

The Elysium is the expected base for the next production Hades to come next year.

We would like to present three cars out of its private collection for public viewing at the 2018 Pebble Beach Concourse d’Elegance. In chronological order:

1967 Epoch Artemus 3000
Unveiled at the British International Motor Show at Earls Court, London, the Artemus 3000 was like no other Epoch ever released before, and was always intended to be something truly special. Effectively a birthday present to Epoch itself, the Epoch Artemus 3000 was released in a limited production run of only 200 examples. With a mid-mounted 2996cc (183cui) 60-degree OHC V8 (a tweaked version of the M20 V8), fed by a single 4-barrel carb and featuring a tubular exhaust manifold, the focus of the car was unquestionable. This car was both Epoch’s first recorded use of a monocoque chassis on a production car and first recorded use of double-wishbone suspension front and rear. All of this gave the Artemus 3000 a 0-100 time of just under 7.3 seconds and a top speed of 200km/h (124mi/h). The interior of the Artemus was also trimmed in quality materials and contained features and comforts that would not be out of place in a premium sedan, as well as offering a radio as standard.

1971 Epoch M30 Regalis Rex
Recently restored, this is one of the very few surviving examples of Epoch’s only ever muscle car. Featuring our first engine designed and built in the USA, the M30 Regalis Rex epitomises everything that made this automotive era special. The production engine came in at a monstrous 8619cc (526cui), with performance figures of 270kW (362HP) at 4500rpm, and 634.5Nm (468ft lbs) at 2400rpm, all whilst being unleaded-fuel compatible. Featuring a smooth and tough 3-speed automatic gearbox, the M30 Regalis Rex could reach a theoretical top speed of 233 km/h (145 mi/h), dispatch the 0-100km/h sprint in 7.1 seconds, and represented a time that could never be repeated.

Brand new hypercar with a whooping 1260Hp and still as comfortable as a GT.A thristy beast which drinks all the oil instantly.

Kyoki Siren is powered by a MASSIVE 9-Litre turbocharged V12.Producing a whooping 1260Hp and 1580Nm maximum.

The extensive use of aerodynamic parts and fine tuned suspension to Siren stable at high speed.And the Handmade high quality interior can give you a comfort driving experience you never have before.On top of that is the overwhelming performance.This is not a yacht(shots fired to bugatti),this,is a hypercar.

Cuz I don’t make classic cars so that’s it.

2019 Arrowhead AVR GTE also possible for Arrowhead motorsport to acquire title sponser to become Petronas-Arrowhead Motorsport competing in V8 Supercars, WEC, IMSA and The Blancpain series [HighresScreenshot00024] The car is meant to replace the light and nimble Arrowhead Vyil, however the AVR is a whole 100mm wider and 430mm longer complimenting the wheelbase with an inrcease of 300mm. This helped to increase the stability of the car which ia essential in the GTE category. The GTE versio…

One of world’s first hypercars, With a pre-war 6.2L 250HP OHC V12 engine, It reaches a top speed of over 230km/h, And it’s very fast on straight line. Well, fast… as long as it’s a very long straight line.

HighresScreenshot00000.jpg3841x2160 1.01 MB
With only 10 units built just before the manufacturer went to bankrupt, it is very rare to even find one at car shows like this.

7 months later… a racing workshop received 1 of the 10 units of the T40. Due to it’s tuning potential, and superb handling, they turned it into a Proper racing machine. Well, Proper… except for the brakes… they cannot take the huge weight of the car…

The colors man, just wow it all looks so good. Easily the best you’ve made yet.