Kong, in partnership with Mikon and the Hays Auto museum, brings you the 1982 KONG Derula, in KONG Mikon race team spec. 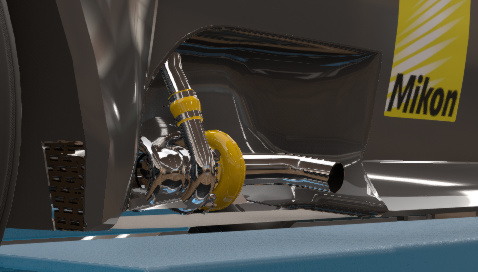 (sorry for the bad photos, i couldnt get the photo scene to open without crashing)

This event covers road racing, and within that context, Group B road racing only ever had 2 cars built to it’s spec, the Porsche 961 and Ferrari 288, so I felt it wasn’t worth including a class that had very little actual competitive use, and what donutsnail also mentioned is true.

In 1995, Squadra Scagliati, the re-formed factory racing team of Scagliati Motori SpA, was given the task of returning to the 24 Hours of Le Mans with the company’s brand new hypercar, the Novedecinni. Built to celebrate what would have been the 90th birthday of the company’s founder, Amadeo Scagliati, the Novedecinni was a technological tour-de-force with its all-carbon fibre construction, twin-turbocharged V12 engine and sophisticated all-wheel drive system, and it set the precedent for Scagliati returning to the heights they enjoyed back in the 1960s and 70s.

Starting with the road car, Squadra Scagliati found very little that needed to be done to convert the road car to a race car. The M-Cinque V12 engine - the ultimate derivative of Scagliati’s famed Mirano V12 - produced 670 horsepower from four litres of displacement, driving the rear wheels only through a conventional manual gearbox. Aerodynamic and cooling improvements reduced drag and improved reliability, and the car underwent an extensive weight loss program, losing nearly 300 kilograms over the road car.

Squadra Scagliati entered the 1995 24 Hours of Le Mans with four cars with the #61 car, driven by Bruno Trevisani, Mikko Heikkinen and Greg Hand, finishing the highest of the four.

Hi, got some question that might be overlooked
What about Driver assist? As the later of the year, there are more of Driver assist.

What should be allowed or banned in driver assist, or it is “Free to all”?

As I was unable to find rules regarding the driver assists, I will allow them to be used, just due to the oversights.

Powered by a screaming V8, this italian supercar ran from the 1970 season to the 1974 season. Although it had oversteering problems, this car still finished consistently in the podiums of the competitions it entered.

Make sure you’ve selected the correct units from the green-coloured drop-downs in the spreadsheet. The above example is what happens when you enter in a specific fuel consumption in grams per kilowatt-hour with pounds per horsepower-hour selected.

In your spreadsheet, the g/kwh is actually the lb/hph value!

The calculator appears to be working fine; please make sure you’re following the directions, or alternatively re-download a copy of the calculator if it isn’t working properly.

An entry from LLA’s racing Headquarters collection is an '81 Spec factory car with the Number 65. This number was raced by LLA’s top drivers for years as a tradition rather than the drivers picking their own number (Until the FIA mandated change). The car itself is developed from the LLA 870 chassis built from 1973 until 1985, renknown for its 4.2L V8 and being the first LLA production sports car with a Mid-Engine layout. The production model is kown for being capable of 200 MPH+ with the more modern varients and cinsists of fibreglass construction.

LLA also offered Homologated race spec cars to other teams who showed interest in their vehicle, they had full control over engine tuneup and suspension geometry once the vehicle had beejn purchased. (If @Vri404 is willing to allow I have a blank ecxported car file for those who just want to experiment with livery creation, as in these series there would be multiple teams running the same car under different sponsers and liveries)

what mods are people using for the racing numbers and the decals?

The main ones that I would look for if you want to keep your mod count low and your sanity high, are:

RB Insanity - Useful because the individual pieces can be recolored. Includes rounded pieces. Each piece has a metallic sheen. Doesn’t work well in BeamNG.

Keudn’s Basic Colors - Useful because they don’t have a metallic sheen. There are more colors in different packs by the same author, but the shading of some photoscenes causes some differences in the colors. Works well in BeamNG.

Patchwork - Big one. Can be used in combination with other mods to drastically alter the entire shape of a vehicle. Useful because it includes recolorable pieces that sit below the body as patches, allowing for decals to be placed on top. Works best on a body that has multiple color slots. Results vary in BeamNG.

Endurance Decals - A collection of endurance themed decals and sponsors for race cars. Includes two fonts of numbers and a number plate. Works in BeamNG.

DLM’s Sponsor Pack - A wide variety of different sponsors and variations of their logos. Contains more decals than the previous mod. Works in BeamNG. A mid-trim model 1988 Hakaru Presage 1.5i S, the original to the race version.

Scagliati made an all-out assault on the Mille Miglia in 1956, with the company entering three purpose-built 250 MM roadsters into the race. Essentially being a re-powered version of the company’s Le Mans entry - the famous 325 “La Tempesta” - the 250 MM featured several improvements over the 325, and also served as a testbed for several new technologies for Scagliati’s upcoming new generation of road cars, which debuted the following year.

As the regulations dictated smaller engines at the Mille Miglia, Scagliati relied on several new technologies to produce the power that was needed; the 250 MM’s Scalzano V12 was the first Scagliati engine to use all-forged internals, which allowed the engine to produce 280 horsepower and rev to 7500 RPM, making this the most extreme Scagliati engine to date. Additionally, a more streamlined cockpit area and the large, centrally-mounted rear view mirror improved the aerodynamics of the 250 MM, allowing the car to reach a measured top speed of 284 kilometres per hour, a remarkable achievement for the time.

The #44 car was driven by the famed team of Ettore Mazzanti and Pietro Zoccarato, who placed the car well in what would be their final race together for Scagliati; Mazzanti retired from racing after sustaining serious injuries in a motorcycle accident a day after running the Monaco Grand Prix the same year.

The 1956 Bresko Type 6C was many things. It was bold. It was a risktaker. For sure, it was a dangerous venture from a company that had little knowledge of motorsports and racing. 5 endurance models were made during its lifespan, with an additional 2 models made specifically for qualifying, of which only 1 remains. The one brought to this year’s Donington Historics is Production Model No.1, #54, which was driven by none other than Mateo Bresko, one of the two founding brothers of Bresko Motors. Unfortunately, it never won a race, though it had several podium finishes.