@07CobaltGirl I am using the one included in the big pack. Is is broken in some way? It works fine for me and the times are relatively within reason of real trans am times.

The important thing is that I am consistent with all entries running on the same tracks.

…we are reconsidering using the S spec engine.

Dude! I’d totally forgotten about the track pack when I went looking. There’s a working link at the top of that thread and it’s got sebring, virginia, Sonoma, and mid ohio.

I shared a link to the old track pack here, which has a working version of the sebring track.

I don’t know that your car will make a lap of Virginia, maybe not even all gasmean. I’m curious to see how you got fuel economy THAT bad… in the interest of clearing up pit lane for everyone feel free to pm me for help

That -60s muscle car body seems to have the aero drag a genuine brick would be embarrassed about.
I used it in one of the BRC challenges, and got very low topspeed, even with high power, but massive fuel consumption.

Eh, If you tune the engine and gears for it the body is not so bad, did a few tweaks after the practice run and gained half a point of engine efficiency, half a mile per gallon, and half a gallon less in acceleration consumption, and gained half a second a lap,. Hoping those gains will let me skip one of those gas only pit stops. She’s just chonky, still around 3150lbs, just not sure if she’s up for running with these featherweights, and their mid 140 sec lap times.

Will we be allowed to tune our cars for different tracks?

Nope, this is the only tuning session, and as stated above the place your car has timewise on this track is echoed in all the other tracks (ie: if you landed in the top 10 (laptime) on seabring, your car will be in the top 10 on other tracks with little variance)

Yes (stated in top of practice post.)
I will run the regular lap on all the other tracks (as only sebring has a flying lap).

I’m at a loss here. I’m probably the heaviest of the featherweights, and I’m still off the pace for about 5 seconds. Either I can’t tune the suspension for shit or everyone just crammed 302ci V8s onto their golf karts. Well, I’m not gonna complain since I wanted to do a lore related build.

How can i download those tracks? I mean, where do i have to put them?

I’m opting to not test my cars on anything but the Automation track, because else I could just min-max engineer the best car, rather than something that’d suit my brand.

Well yeah, but these are racing cars based on production cars, the suspension should not be tuned the same way as a basic showroom model, nor should the gearing. Most real life examples of these had just the bare minimum of homogenated examples built and sold to the “public”. You can be lore friendly and still make a race tuned car.

@v4guy from the sound of it you’re just lacking front end cornering grip, you should probably have at least 1.0G of grip at both circle test speeds, give yourself some more camber as you’re already making stops for fuel so you’ve got room to add more tire wear and increase your cornering without wasting much more time in the pits.

“Hey Rob, we were both the subjects of a practical joke”
“How so?”
“The marketing department covered your car in a quick use camouflage paint that is being used on our military vehicles. Yours is called beach sand or something like that. I have been driving that car I gave you around for a month without knowing.”
“I am not sure what this all means…”
“Wipe your cars down with vinegar.”
“?”
“Someone will appreciate the surprise. The trim painted is in our new enamels, so that part is fine. I am impressed by their color scheme, and had no idea it was preplanned. My special vehicle design team also brought me a pamphlet showing the Fantasia Honeybadger 73 being a limited production run of 1,000 cars. I will send a courier over with the picture. They tuned the engine to 86 unleaded for intercontinental compatibility but it is still a formidable car for the streets. Good luck with stripping the interior, the new car tuned engine, and the meatier tires.”

1964 Allendale Motors "Barrier GT"
Allendale Motors is known nowdays as the horrificly Malaise car company that threw a seemingly last gasp with a turbo sedan in the 80’s called the Barrier Skylighter that somehow saved the company from ruin.

Before their post 1969 slide into big, beefy American sludge, were a range of sporting coupes and muscle cars that led to the anti-climactic 1968 Barrier with a wheezy 265ci V8 and 3 speed manual.

So one must ask, what drove the company downhill? It was, of course, an unsuccessful ASCAR program that saw the company lose focus on the cars that really sold, like the original Barrier and to a degree, the 1966 Barrier GT.

Built with the good 265ci V8, it was intended to batter the Barracuda on the race track and the showrooms, and then Ford came along with their Mustang, and the Barrier was quickly re-jigged as a luxury sport coupe that never cost enough for Allendale to make their money back…

Allendale had been making money on the side by selling V8 motors to Bamford in England, culminating in a 360ci race engine for a sports sedan project in 1975.

When Trans-Am first came along, Allendale approached Bamford for technical assistance in making their under-performing coupe a real weapon in this new category.

Sent along from Australia were two Ex-BRM mechanics who had returned home, Ken Rogers and Barry Phillips.

Ken and Barry would later campaign a range of unique trans-am and sports cars, Holden Monaros from Australia, Ford Falcon Sprints and a Shelby Cobra that saw the duo end up in a GT40 at Lemans in 1969.

So now you know their story, have a look at the baby they built:

The Barrier Trans-Am spec got a new diff, gearbox, bore-out of the 265ci to 304ci, fat tyres on some clean British made mag wheels, new shockers and leafs and a whole range of little tricks, like a suspicious vynil roof, brake scoops, and side-exit exhausts.

And it drove like garbage, admitting they knew little about chassis design at this point in their careers, the head of Bamford’s race team, Albert Brooks came over and helped the duo, but of course, this is years before any of the three become noted touring car mechanics, can three open wheeler boys actually make a splash in the world of Trans-Am?

Probably not, but we’ll have some fun watching the fires burn anyway!

-What? An endurance race? Anyone told me about this, but i can fix the car with some time…
Those were the last words of our former chief engineer.
Meanwhile, the DVM Crusader got a de-rated and more fuel efficient engine, along with a minor weight reduction and a new gearbox, which we hope will avoid those 50 pit stops at the next run.
Some say those pesky italians can’t win in the Americas, but we won’t surrender this time 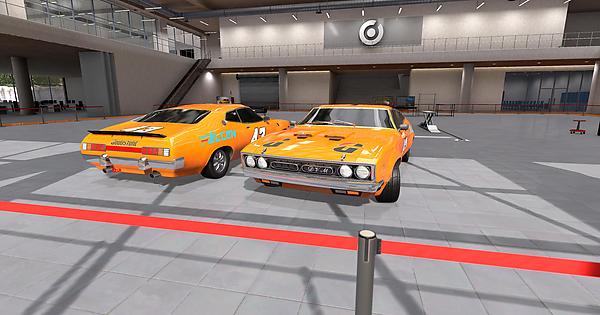 As driver Denny Hill pulled the #02 Armor Valencia Stock car into the garage, Armor Motors’ Head engineer waited for him.

Denny: “Had to give it more taiyer in the front! Took out some dead weight by pulling some safety crap out of it, too!”

Denny: “Piss on that, Earl. This is racing… I need to go faster!”

Ed: “It’s Ed, and if speed is what you need we can try an even wilder cam.”

Denny: "Actually, no. Take some out of the cam. Damn car’s a brick anyways, HA HA HAAAA!!! I’m already hitting the limit of what the car will gimme. Now I need laps… more laps until I fuel.

Ed: “I’ll have a new cam ground for you immediately, Mr. Hill.”

All these replies made me want to do one of these, myself:

As the cars pull in, and the engineering crew is overseeing the results, a heated debate sparks up all the way in locker 311. Numbered so at request of the Kampfer’s staff, after their Mille-Miglia contender in 1931.

S. Fischer - “It is vat?! Of course it is too slow, we barely had funding to do up ze engine. Vat did zey expect from an upper-tier roadster engine?”
A. Wolff - “Well, zey want more, more power? Vat will we do to get it? Will we retire?”
S. Fischer - “Retire? Ah, have you lost your marbles? if Moscow wants another gold trophy zey will need to work with us a little… get ze spanner, and go get some of zat good oil without twigs in it.”
M. Bobrov - “It is your heads, I am defecting while we are here, I don’t want to come home empty-handed!”
S. Fischer - “Oh, mein gott. Drama abound.”

The engineers feverishly set to work, modifying the engine until they realize the 3.0 liter block doesn’t really cut it. After some back-and-forth speedy discourse (but not Discord) the Kampfer crew is given access to the industrial RET 5.0 V8 from the RET Zhirafa executive limousine. Plans are made to make a limousine of their own to make the other side of the wall jealous, after shoveling it into the S20 and tuning the car to deal with the much-meatier engine over the course of the next few days.

A. Wolff - “Zat is zat, at least we may stand a chance now, even though the engine bay is very full now… how do you find-”

Dr. Adelbert Wolff finds himself alone in the workshop now, with one comrade defected, and one apprehended for very safe keeping until the results are out.