Nice to hear you like my designs! ADM is still a small mass-production company and only sells cars within its own country. In a few years will jump into the globalization’s fauces and will start selling cars in the rest of america, and eventually the world

But, in the meantime: 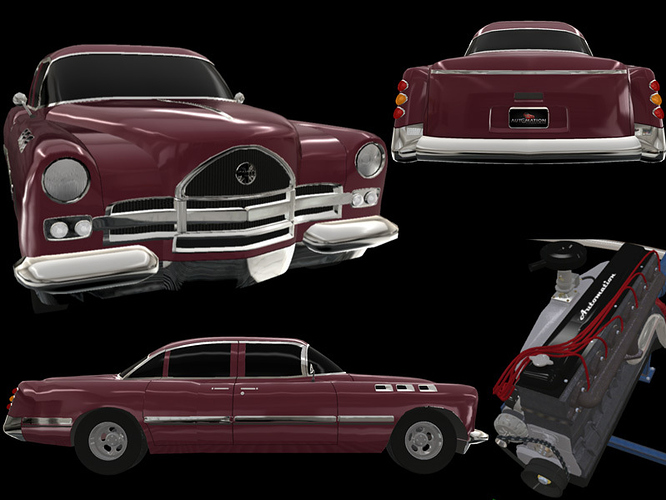 After the success of the first generation of the Rivera, ADM renewed the design for a more modern look. It was also bigger and the coupé version was ditched out (the Madero was set to fill that gap). Powered by the same Ventury 6 engine and a new 4 speed gearbox designed for crusing, the Rivera was the car in its time (and its country). It was immortalized in different movies, and due to its popularity it was well selled in different markets.
It could seat up to 4 adults in a comfortabable interior (pretty much the same materials, seats and dashboard was borrowed from the Volcán) while still reaching 100 km/h in 15.5 seconds, even weighting almost ton and a half.

Some lovely work here. I’m digging the front of the Madero.

Madero is just my cup of tea. Love it

Time to revive this thread

The mid 50s was a boring period in ADM life, not much models were introduced. In 1954, 2 models were modified to follow the new regulations regading indicators, those were the Madero and the Volcán. ADM also presented 2 new trims, the Madero Convertible and the brand new Volcán 4x4. 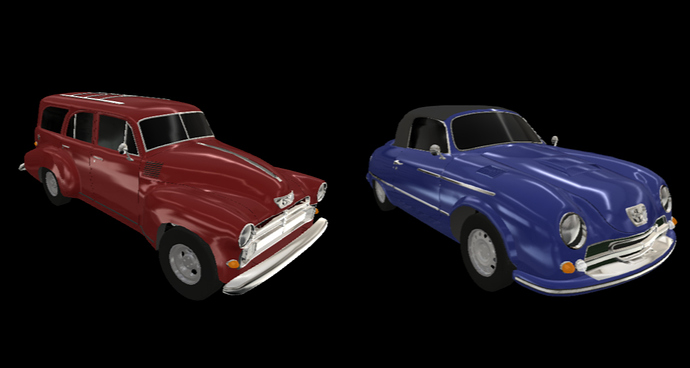 The Signore went into a minor facelift in 1955, and a new trim was introduced, again, using the Venturi 400 engine.

4XkNXEU.jpg1244x460 134 KB
This new engine was a 4 liters OHV V8, with a wide powerband, special care was taken regarding the fuel economy curve to match it with crusing speeds.

In 1956 ADM presented the Villa, an small nimble car that replaced the previous city car Gómez, replacing the old looks with a modern box design. 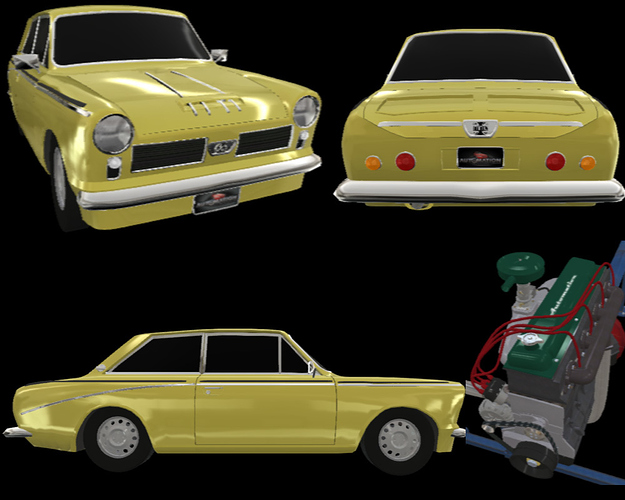 u8uHyEN.jpg1000x800 143 KB
This time, the looks was inspired in japanese cars, so the car had no resemble to the other cars in the line-up. It used the Venturi 200 unit, which was a 2 liters OHV inline 4 engine paired to a 4 speed transmission.
The sales of the car were pretty good, even better than expected, and was the first ADM car actually been sold outside Mexico. 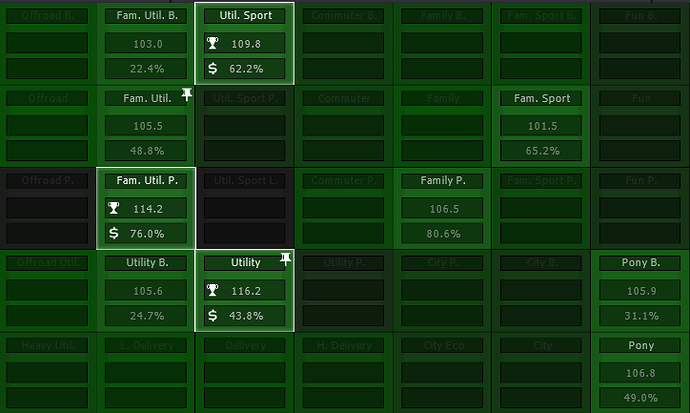 Really nice the Madero, Volcán 4x4 and Rivera II.
Madero like a car name would be somewhat funny in Spain, it means a piece of wood or, in a despective way, policeman.

@DeusExMackia thanks! I spend quite a time with the design of the car, looking for simple and natural designs.

In 1958, ADM was ready to sell their cars in all America, so they decided that all their line-up required a new refresh look, so all their models recived new engines and new looks by 1960. starting with the Villa. 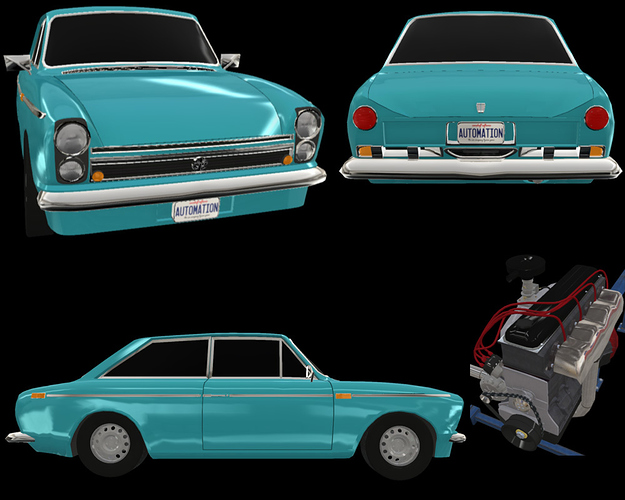 BzLcRzl.jpg1000x800 147 KB
The new generation of the villa was actually based in the same platform and used the same chassis as the previous generation. So the basic layout was preserved, ladder chassis, RWD, with an L4 engine and 2 doors, mcpherson strut front and solid axle with leaf springs in the back. The engine was brand new one as well, it was called SiCa2L, from a new family reffered simply as modular 4.

UQLy1s1.jpg933x267 51.1 KB
It retained basically the same power output as previous engines, but the fuel economy and the reliability was improved. Being an entry level car, it was offered only with a basic interior and 5 seats with just enough safety to survive in case of a crash. 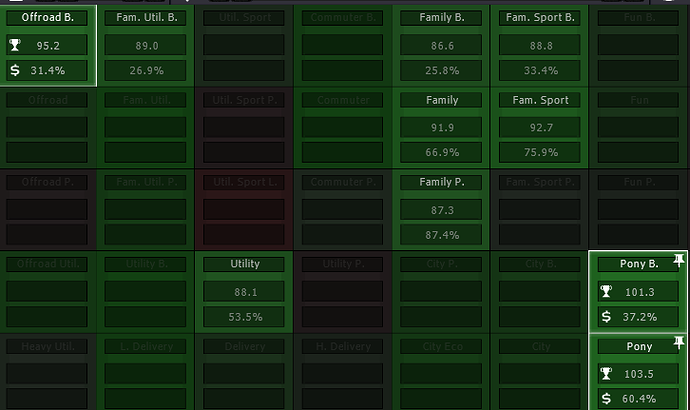 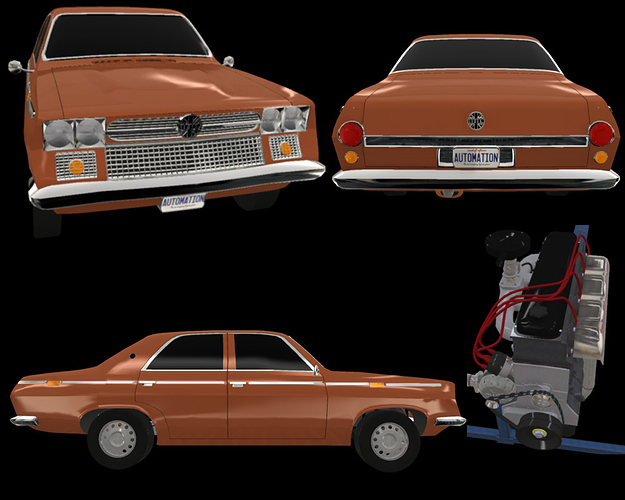 A new model was introduced, since the Madero was going to be a sports car, there was a spot left between the cheap Villa and the luxurious Rivera, so ADM created the Quijote. Using the same basic construction as the other models (RWD, ladder chassis, mcpherson strut front, solid axle leaf rear) the Quijote had 4 doors, and it was presented in 2 trims, the base and the premium. Both powered by the SiCa22L, a 2.2L variant of the Modular 4.

nWjkQjW.jpg933x267 60 KB
The base version came with 4 speed manual transmission and a 5 seat standard interior, with advanced safety and power steering. Saleswise it was pretty good received.

The Premium trim included a 3 speed automatic gearbox, an updated suspension system, and a std radio, while the interior was pretty much the same as the base version, this one has fake wood details to give it more “class”

I genuinely like the designs you present here. They seem very authentic to me, given that they’re mainly targeted at a Middle-American market. Moar?

Thanks! This is actually my side company but as it turns out, I have spend more time with this than my main company

It’s quite fun to do cars for the middle market, they don’t have to be over-the-top cars, and it allows to experiment different designs (as my main company Meliora Automotive is/or will be focused in premium and light sport cars, like BMW; while this company is more like Chevrolet-chrysler type of thing. 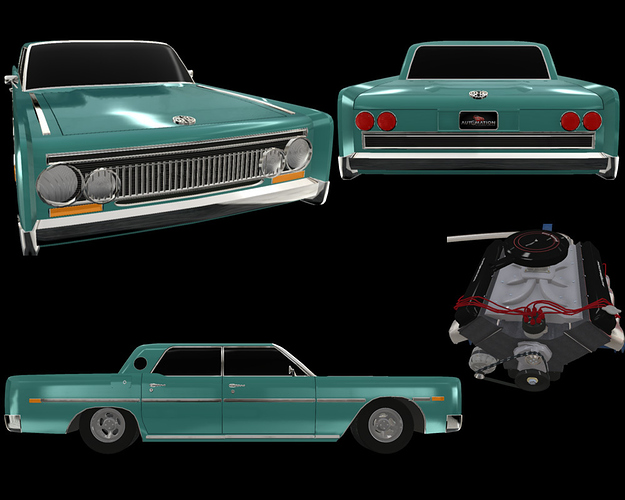 With every generation the Rivera was growing in size. The 1960 model received a new chassis (but the same old arrangement, ladder chassis with double wishbones front and solid axle with leafs in the back) and a new engine. There was only a trim available at the time, and it came with the Mastiff V8 engine, a powerful 4.9L OHV V8 matched to an automatic Hydramatic 3 speed transmission.

FlmL5eJ.jpg875x266 52.4 KB
As the gear leaver was in the steering wheel, the Rivera could fit 6 adults inside, featuring a premium interior and a premium AM radio.
Despise its weight (1.5 tons) the engine could move easily the car, and the suspension was comfortable, resulting in a nice and comfortable ride.

oh, I’ll have to see how my company’s car stacks up to this one, as I use the same body, a V8, and is sold in the same market and categories. (the car is finished, but the story is waiting for 2 earlier stories to be written first)

@findRED19 I’m pretty sure it will do much better, I’m terrible at optimizing my cars. But, in the narrative of this car company, the engineers are most likely still hitting rocks together

After the introduction of the Quijote and the Villa, the madero was upgraded to the sport model of ADM. After seeing what its fellow contry-company Meliora was doing, the guys running ADM decided that they wanted something of that as well, and the new generation of the Madero was presented. 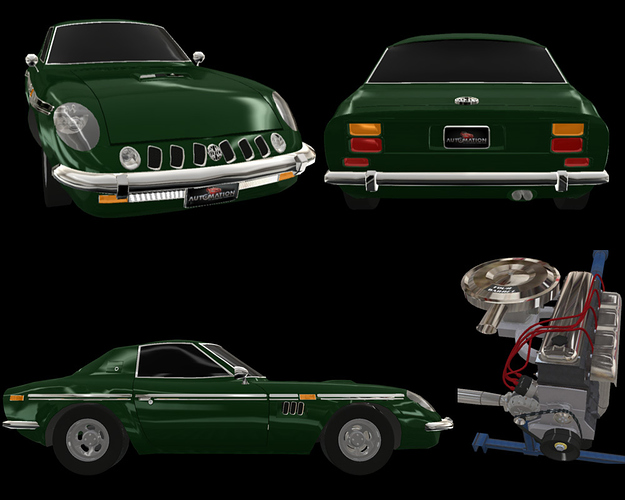 1I1nclF.jpg1000x800 126 KB
It came in 2 trims, the regular or base and the super which is the one in the picture.
The design was controversial, as it was completely different (and ugly) compared to the anterior design. Instead of the classic ladder chassis, or a modern monocoque, it was build on a spaceframe chassis instead (tooling for a monocoque car was expensive, especially for a car that was a gamble).
The base version was powered by the same SiCa22L as the Quijote, with a similar 4 speed manual transmission.

3wsfZqT.jpg803x267 54.4 KB
Due to the fact that the ensamble of the car took longer than any other model in the line-up, very few were made every year, and it was a coveted model.

What do you use to calculate the cars price at the time of production?

I call it the gold method

I read somewhere in the forum that the automation money units were roughly based in 2010 US dollar.
And according to this page http://www.macrotrends.net/1333/historical-gold-prices-100-year-chart the price of gold in January 2010 was $1179.88 per ounce. I just convert the value of the car to ounces of gold for that year, and then back to currency for january of the year that the model was launched. The idea came from this post --> Prices, production untis and Economy questions

Thanks, I’ll have to remember to bookmark that page on my home computer later, since Im currently at school.

Following the tradition of trucks and Suv’s, ADM put to rest the old ADM-35/volcan and launched their new trucks line-up 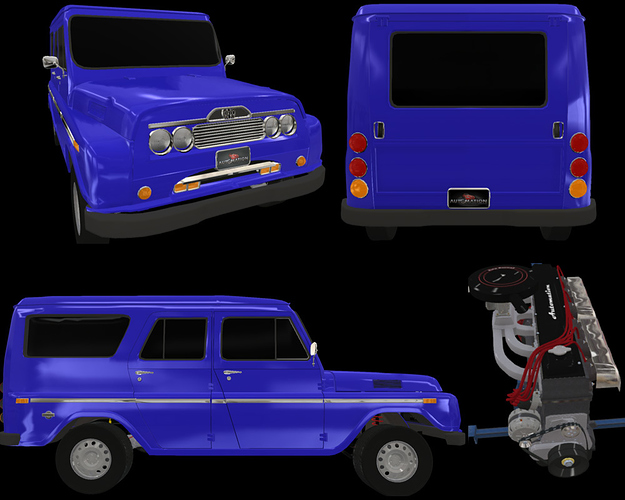 The brand new Mastin Familiar was a basic SUV (ladder chassis, mcpherson strut front, solid leaf back) with rear wheel drive, powered by the replacement of the old Venturi 6 (1946-1959) the brand new Mastiff L6 unit. It had 3.6L of displacement with OHV configuration and a 2 barrel carb, with enough power to move the not-so-heavy suv (1275kg).

SoOxJOX.jpg840x267 49.6 KB
It came with 5 doors, 5 seats and std interior, with an automatic 3 speed transmission. It had no radio, but for extra money you could get one. 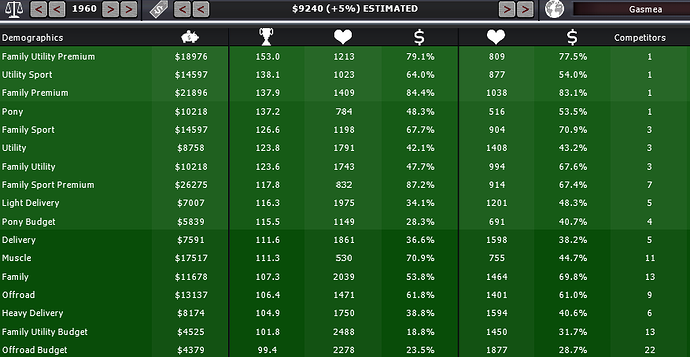 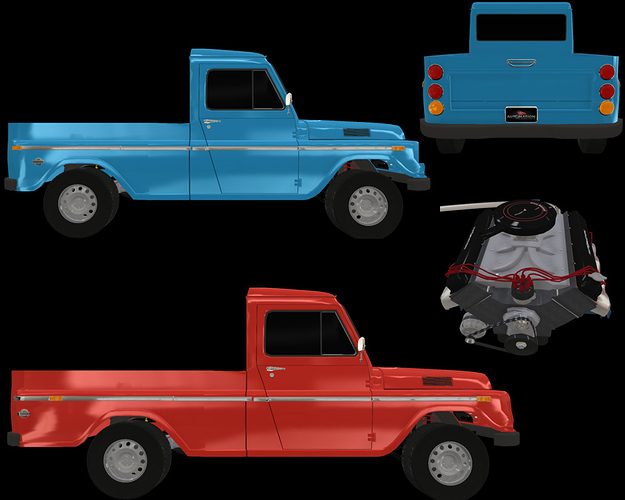 2 trims were offered as well, a single cab powered by the same L6 engine with a manual 4 speed transmission w/overdrive, with RWD, and a longer 4x4 version, with the same v8 as the Rivera, but with an 3 speed automatic transmission, both with manual locker diff. 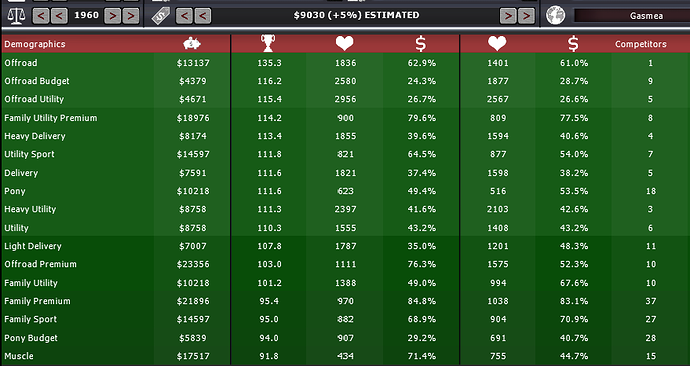 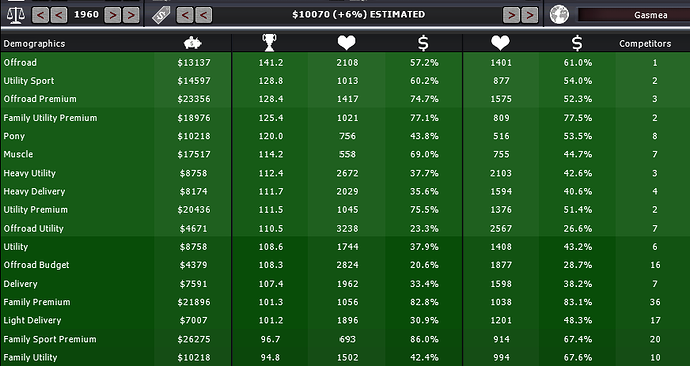 Still at 1960, ADM was partially founded and owned by the Mexican government, meaning that most of their prices were low to allow the national market to take off. But in 1961 the government decided that too much money was invested into ADM and the company was warned that they would stop receiving support by 1965.

Preparing for that, ADM managers put a lot of effort into a more aggressive international campaign, and they offer all the line-up across the whole continent. All the models were redesign (face-lift and a more intensive engineering) to compete with other makers.
Also all their new models came out with a higher price, to cover the new costs per vehicle and the lack of support by the government.

One of the first models to receive a face lift and a complete re-worked engineering was the big sedan Rivera. Only the chassis and the engine (4.9L OHV V8) along with 90% panels remained the same, but everything else was reworked.

It had 5 seats (a seat was removed to place a phonograph) with the a nice premium interior (a lot of leather and woodgrain) and the most advance safety. The brakes were solid disc front and drum brake a the rear with wider tires (in comparison to the older model).
Since it weighted a lot and had an anemic engine with a 3 speed automatic, the car was pretty slow. It did 0-100 km/h in 13.9s and it could reach a top speed of 181.7 km/h.

The Rivera was pretty good received, and the only complain was the lack of power, but must owners just re-tuned the engine and added more carbs to it.