I never specified my controller. I’m on an Xbox 360 gamepad.

how long till race?

Race should be in 3 hours. I think everyone has their stuff downloaded, but if you don’t, go ahead and do that.

I won’t be competing, but since it was an interesting design challenge, I gave it a go. Anyone wanting to compete, but without a car, feel free to use this one. It’s a ‘75 MCA MCFI, the manufacturer’s first endeavor into fuel injection systems. Still mechanical, though. This car was compliant with the first set of rules, I just made it a little better to use the new rules’ resources. Its powered by a 4.5l OHV V8, making 145 hp, though a 4 speed manual to the rear wheels.

It’s beyond last minute, but if we get a driver I’ll allow it.

Also change of plans: Instead of hosting my own server, I’ve got a room on Nev’s server for us to use. This link should work, I think. So, that’s where the voice chat will be. There’s an ALR text channel and a voice channel for the race.

when will the server be up?

Race is over! Look forward to a video soon.

These types of event take Beam + Automation to a different level

The results video is in!

While the recording didn’t break completely this time, unfortunately it didn’t record voice chat during the race. At least we have something to watch this time.

Stay tuned for the next event. I’m not sure what the schedule will be with the holiday season. What’s your opinion?

Very nice video, pretty cool to see the race again from a TV perspective with commentator.

Also, considering discourse is saying only two ppl clicked on the link and 8 ppl voted on the poll, I don’t think most realized you can click on the red ‘The results video is in!’ title.

Looks like it embeds if I just put the URL in. Handy!

This was an absolute blast! If we don’t do another one before Christmas I may not be able to join in (though if you announce it and I can build a car then maybe I’ll submit it in hopes of finding a driver), but if you ever record a replay right in BeamNG and want to play around with having a camera that can see all the action I’d be happy to play with the file and make something out of that rather than just having you freecam the whole thing. The video was still great with the commentary though.

I do like the idea of recording a replay in beam. I could even drive myself if I wanted to.

But, I’ll have to test that out. I have no idea how well that feature works in the multiplayer mod, over the course of more than ten minutes, recording a bunch of people driving.

I’ve noticed a lot of stuff I need to brush up on. I want to get voicemeeter set up properly so I can, hopefully, record all my audio sources on separate tracks for editing purposes. I also had some issues recording with OBS. When I ran the game in a window, OBS generated a video with black space around it and I had to awkwardly scale the video in OpenShot, which still didn’t work very well. I should also probably hide the UI during videos, haha!

It looks like there’s some demand for an event this weekend- I’ll see if I can whip something up.

People seem split between wanting an event before christmas, and waiting until after for more time to do a proper event, so here’s what we’re doing: 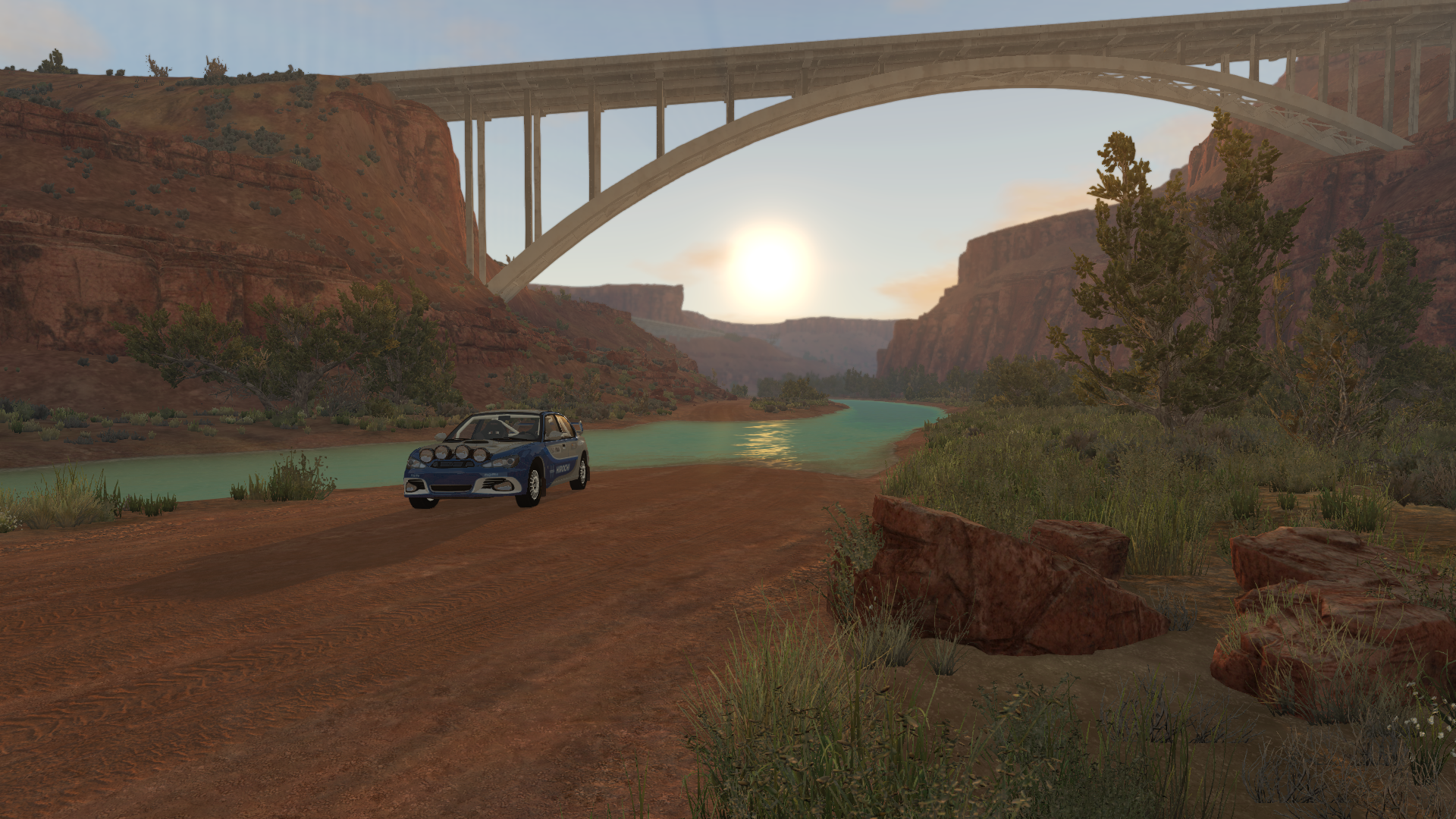 
Welcome to the the place for live multiplayer racing in BeamNG! This will be a competition to determine the best combination of car and driver.

To play, you will need BeamNG, The BeamMP Multiplayer Mod as well as Automation. It is also recommended to download the vehicle mods ahead of time, which will be posted before the race.

Track: Utah River: We’ll be following the river from one end to the other- and back! It’s probably best to stay on the dirt road. The course bounds are the lowest layer of the valley- if you get above any of the rocky ridges, you’re off course.
Heats: Let’s just see how many people we can pack in at once and stress test this sucker.
Qualifying: First come first serve or something.
Schedule: Race is tentatively scheduled for 3PM US-CST on Sunday, December 20th.

Teams: One driver per team, and one or more car designers. You may be a one-person team. No driver or designer may participate in multiple teams. When submitting your car, include your Driver’s discord name (as this is what BeamMP uses) and control type (EG Steering Wheel, Gamepad, Keyboard).
Naming: Name your Model and Engine Family “ALRB-Username” and submit it to me on the forums (not discord). If you’re on open beta, add the tag “ALRB” as well.

Schedule: Submissions are due by midnight on Saturday, December 19th. US-CST time. Once again, the race takes 3pm the following Sunday.
Pre-Download: The morning before the race, I will make a download of all the BeamNG mod cars available. It is strongly recommended that you download them ahead of time instead of when trying to join the server. Mods go in your BeamMP\Resources folder. This will save a ton of time when joining the server, which could otherwise take up to 30 minutes!

It is 1985, and rally racing is basically a free-for-all or something. I dunno I’m not a history guy.

Year: Model and trim 1985 or earlier
Total Cost: $25,000 or less
Minimum Quality: -4 on any part
1 wing fixture allowed, must be fully outside the body
Advanced 80’s Safety

Year: Family and Variant 1985 or Earlier
Max Displacement: 2.0L
NO Turbo
Minimum Quality: -4 on any part

AWD and offroad tires are a wise choice. It’s a dirt road so don’t make the car too low or the suspension too firm.
These will essentially be race cars, so no need to weight them down with entertainment or extra seats.
You may want to cross the river multiple times. A tall ride height will be crucial to avoid flooding the engine.
There’s a lot of room to minmax but don’t take it too seriously. These rules are loose so you can make a car in a hurry, since we’re on a very short schedule for this event.
If you want to make a lazy car with no fixtures, that’s fine.

WARNING This is a silly idea that might crash the server. Consider it a technical test as well as a casual race.

oi I might already have a proper car, assuming I can do some slight modifications

It might be handy to have to a clear definition of the track checkpoints(start, end of river, etc…).

Silly ideas are the best ideas!