Another Design Challenge [ROUND 1 - Judging Published]

AND IT IS ALSO AVAILABLE IN TWO-TONE!!!
( .car file: https://drive.google.com/open?id=1aLhvw163wS0vTkwQ-B8jy58sY5seD5xo )
Edit: oops i forgot the windshield wipers

WELL, SUBMISSIONS CLOSED
i would love to say that the results would come tomorrow, but i really cant, i returned to university this week, and even being the first week its driving me crazy, and i still need to finish my FM3 entry, that well, i started only some days ago since i was on a creative block, but, expect the results to be there in the weekend, saturday at max, since i have a free friday, sorry for making you all wait for the results

Sorry for taking too much time, for real, the professors just decided to launch a bunch of things to do since we're at home because of coronavirus, so i had to to everything before judging it. I had not take any photos too, so it would not take more time to be ready.

note here: I should not even judge it, the guy dont had sent me the car

Ok, there is parts on this one that is ok, there is some that is not. The rear is pretty ok, it lacks some things like lettering at all and a reverse light, aside from that, it would be a good rear, some things like how the exhaust were put are pretty, it would have chance But when you come to the front… The car seems that he wants to sleep, even it being low on fixtures, they were used in a good way that make it ok, but some things just dont go well together, like that square(and big) foglight, some lines dont flow nicely too, like the big vents exceeding the headlight line. The sides seems ok, but the bumper should be colored on the car color.

The first thing to say about that car is the color: Even being the extreme extreme version of a car, i cant see a brand letting a car go out with a “thanos purple”(it was actually called poison purple) color. So ok, that was point 1. Point 2? Is pretty incredible how much different lines are there, and its not a good thing. Ok it go pretty okay-ish on the front, the headlights needed by far to be more horizontal to it doesnt look as a european cheap car as it looks, and that foglight is big af. The lines part i was saying: The car is pretty blobbish, then you have things like a totally square mirror, and the sides pretty bland, there is just a blinker and a door handle, nothing more, and well, that “tyre” thing is big af, its too much rice-y to be “0km”. Now the rear, actually it go good, apart from the fixture used for the space between the lights(it could be just a light painted as plastic or a bumper bar) and the plate being the wrong one, the correct dont fit, and then again: opposing line flows: while the car is blobby, the exhaust is square??? But, well, it could do good with only like 2 or 3 modifications.

This has everything in place, the plates are ok, the bumper colored on the car is ok, but the problem here is: The headlight is too small, and that blinker kills the “square” flow, but wtf, a square flow in 90’? there is where the problem is: Its too much square for a 90’ car, could do well in a 80’ car, but you’re in the wrong decade. And its still pretty bland, like, its just a ok design for a 80’car(and the exhaust is too small too). The vents on the front could be the size of the foglights and the fuel cap is on the wrong side(its meant to be on the driver side), the mirror is too small too., if you had used the new mod popups, it would definitively work better.

This looks like a escort, that is the problem with the front, it doesnt look as a japanese sport cart, it should get a vertically smaller headlight, and well, a smaller foglight too. Indeed it looks like a riced family car, but not a problem. I love that intercooler detail, even it killing my pc. The bumpers should be car colored too and that rear looks to much 80’s. Its perfect… for a european car. I love the car color too btw, its a good car.

When seeing the car the first thing i though: wtf that headlight is aligned to the body, it need to be aligned to the horizontal if you dont want it to lighten the skyes. It is a mix of the Oktopus and the civic. That turbo badge is big af and so is the foglight too, wtf. Again a wrong side fuel cap. The color and the wheels are right, the sides are pretty ok too. The rear is hmmmmmmm, if it was not because of that grille on the bumper, it would be pretty nice, but it just make it looks meh, sadly. I made some test with a proper exhaust and lower bumper and it was rad. Oh, the taillight was aligned to the body again.

That car has the most small file size, so, as expected, is bland af. But ok, it can work well in some cases and foremost its not a problem. The front looks pretty ok, more blobby than it should be and yeah it needed a scoop, so its just a family car and looks like a silvia. Its sides are pretty bland, yeah, a colored bumper would be appreciated. The rear looks exactly like bug bunny, and its not a good thing. That taillight make every position of it looks like the bug bunny. If was not by that light, it would work too. 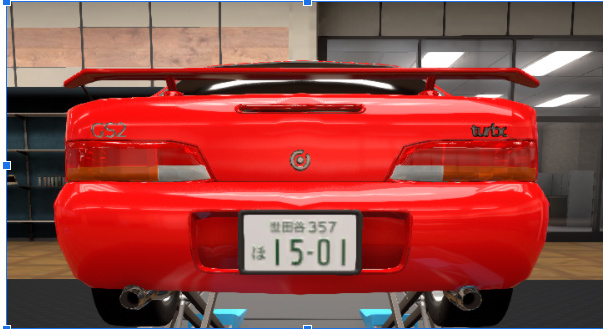 Thats no way to dont remember a silvia on that body, but that car makes it in a good way, even ressembling in some ways like the front, but it is pretty different and good. The headlight could be smaller vertically too, like this, so it looks much more sport-y(you can see in the pic)

well, in that pic there is another problem: the blinker is on a pretty wtf position: where the foglight should be, the blinker actually should be at the same level as the middle “grille”. A colored bumper bar here would look even more rad, and a scoop too. The sides looks too bland, there is only a door handle and a blinker, sadly and the mirror is too big. The rear dont have any major problem, actually i love the way you get rid of the “silvia” thing, i love it. The color could be more livid too.

that front is rad af, more rad that what it should be, but yeah, it still looks good af. But it has the same problems as the back: a big protuberance, and wow, that makes the car goes from a rad to a meh, for real. Ok the front still save itself, but when you go the rear. No, it looks like a fiat coupe actually and not in a good way. For real, if was not because of that big booty, it would be a contender for the win, and i love booties.

its like a corvette and a miata had a son. The front looks exactly like a corvette, but the rest of the car is japanese enough, sporty enough too. The only thing strange here is the piece of “light?” between the two taillights, that material make it looks strange af. The livid color is rad af, how it should be in the 90’ jdm sport cars.

That one is the one i dont have any design complain, for real, its PARFECT. But well, i cant give this a place, but why? Cuz well, its not a 90’ design. I can see you tried to make it look curvier as possible, but well, it would not age well, sadly, if it was a 80’ jdm sport challenge, you would win and thats pretty sad :(

The only thing that is wrong here is that there is not a side blinker. Everything is ok apart from that. The problem is: Its just a Silvia. Like, not any change, its just a Silvia, i cant give a wing for a car that is almost a replica, even it being well made. The color could be different and the fuel cap is on the wrong side too.

note here: I should not even judge it, the guy dont had sent me the car

It just look as a boring car, not as a sporty one. The front and the rear remembers as much the civic, but well, in a more boring way. Even the color is boring. There is some problems in the rear, apart from the bad construction in the light, that i will not consider, but that spoiler dont work, its too big and pretty wtf. Its a ok car, just a ok car, and could be considered, but its not sporty.
TheTechnoVampire 2020-03-18 19:56:31 UTC #32

Did I just win a challenge!?

I can definitely see about hosting the next round, will just need to think up a theme.

Cheers for hosting @Arvok1. As soon as I saw the theme I just knew I had the perfect car already built for it.

What I don’t get is, he said I didn’t send him my car. But if he bothered to look, there was a download link for the .car file

Well done to everyone. The winner was a really good entry, looked exactly the part.

Also I should really be kicking myself, I knew it looked too 80’s even when I was making it lol

So my car wasn’t counted?

actually i didnt received your entry, and it was not posted here, so i couldnt judge it

With all that’s going on right now with the coronavirus I may have forgotten about it, but a little reminder would have been appreciated.

Sadly i was pretty ocuppied and forgot to do reminders or whatever, sorry about that, i can judge your car on your private

It’s okay. I’ll see what happens in the next round if there is one.

Just a word for all, I’m still figuring out what exact theme the next round will be.

I expect to have everything sorted by Sunday at the latest.