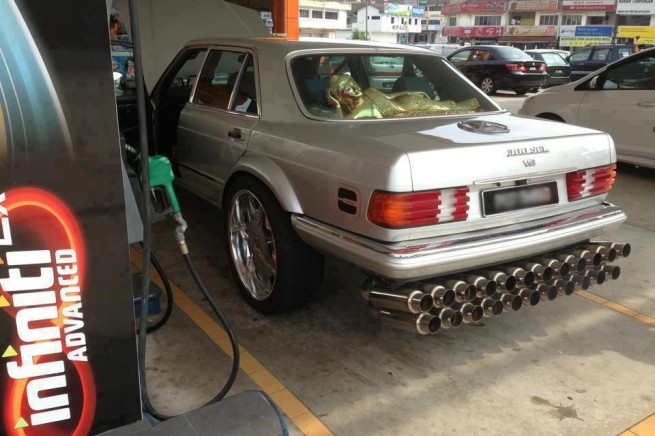 The one who did this to that poor W126 should be closed into prison.

Wow, they just added a second rear bumber to that Merc!

The Arion Mythos Cosmos got an upgraded variant in '81 aimed more towards being a sporty hypercar sedan. The interior had the luxury rear seats taken out for smaller lighter ones, as well as reviving an aero package featuring a new bulged bonnet, front bumper & lip, full body-painted trim, and a rear boot lip The engine had also been boosted up to 373hp.

The Arion Pylades II '81 was created to conqueror the super/hypercar market. Featuring a grand, improved all aluminium 5.0L V16 from the original Pylades now with twin turbos. The lightweight aluminium body from the original shells of Pylades I were used over in the Pylades II but completely re-designed in a much more futuristic and dynamic way.

From the whaletail to the interesting front aero wing build into the facia of the Pylades, you can tell it’s uniqueness and style sets it apart from all other hypercars of the era. The Pylades II even featured an unconventional hydropneumatic suspension to cater to comfort. But it didn’t stop with the good lucks and luxury with no performance to back it up…

The Pylades II has a mighty 600+ horsepower to back it’s heavy weight of 1728kg, most was at the rear from the engine’s pure mass and size, which aided performance too. It could achieve an outstanding 0-62mph in 3.7 seconds and 50mph-74mph in 1.9 seconds with a 1/4 mile time of 11.7 seconds. Around the Airfield Test Track it shot down a 1.18.01 lap time, blowing away the competition. The engineers claimed it could reach speeds of well over 190mph (196mph in game) despite there being no real location to test this properly.

With the 50th Anniversary of Arion in 1980, the Aruna decided to celebrate with their next model, forming the Pylades II “51” in 1981 to mark fifty-one years of Arion Automotive & Racing Co. The Pylades II “51” featured a much more higher quality interior, and had the whole internals and body perfected with higher quality. The exterior featured a new original ‘Hellfire’ colour, and a revised ‘Sterling Silver III’ colour as the options as well as the colours shared with the standard model, “51” badges and a chrome trim to the rear above the taillights trailing towards the front of the car.

With the old first generation “Alpha” Heron being a gran success, the Heron “Beta” was released in 1981 with the intention of hitting the family/muscle/entry level gt premium market. Sticking with the original design language, the Alpha was revised upon to form the Beta’s newer body alongside new Arion design language to join the lineup.

The Heron B gained around 200kg more weight over the first, which surprisingly didn’t affect but rather helped performance especially with the newly developed AWD drivetrain in use. The horsepower stayed around the same, but thankfully the more aerodynamic body helped give it an edge compared to the Heron A.

The Heron B has quite a wedge shaped style to it, and the popup lights are larger than they would be on most cars, yet only shifted half-open for better aero in low-light conditions. (I cannot show my idea due to limitations in pop-ups in the game however) The rear has very similar sharp lines akin to the Pylades II, but has only a small lip spoiler on the boot. Heron B also featured rather large sporty exhausts, due to the large mufflers it used for better emissions.

The Heron B was quite well received in the market for sporty family muscle cars and GTs, and hit around 150mph (147mph in game) top speed and 7.39s 0-62mph time with the standard version’s advanced automatic gearbox. Again this model featured hydropneumatic suspension for luxury and comfort reasons, further gaining an edge over competitors there. Although the suspension was more suited to driving pleasure and ease over comfort.

Along with the standard model, buyers could get an upgrade package to the Heron Sport B. This variant was much more focused on drivers with a manual 5 speed and larger brakes for the added comfort inside with higher quality seating and interior trim featuring a variety of colours over the standard’s black or beige.

Even with the slightly heavier weight, the car made a great time of 1:26.12 around the Airfield Track thanks to the better geared 5 speed manual. This also improved top speed as Arion test drivers achieved a maximum speed of 153mph on a closed section of the motorway, with a 0-62mph of 5.82s too. For the quarter mile time, it got 14.23s.

I would love to see those popups in action!

The new Shoebill was quite different to it’s original, having a dramatic style change. It no longer looked as muscular as a muscle car it is in that way. But the body added to it’s sleeper look, as it has an overwhelming 485hp. The styling was similar to the Heron B as it was part of the muscle car trio Arion lineup.

For the Shoebill to set it’s self apart from the smaller and less powerful Heron, it had to have more luxury and sportiness to pack into it. The large horsepower helped, but the newer luxury interior and hydropneumatic suspension and advanced automatic gearbox catered to the GTP market very well too. All combined into a mid-side package, the Shoebill fit very firmly above the Heron B in terms of quality, prestige and luxury.

The standard Shoebill was not quite as tame as it looked, as it could reach from 0-62mph in 5.47s and 50-74mph in 2.53s. As well as hitting a solid 13.51 seconds 1/4 mile time. The Shoebill could also hit an apparent top speed of over 180mph (183mph) too! When taken to the Bruntingthorpe Proving Ground, the Shoebill was able to hit 178mph before having to brake. Around the Airfield Track, it achieved a 1:22.61 time.

The Shoebill S (Sport) was a 4 speed manual version of the standard, also including a firmer lower suspension setup for more of a racing focus as well as the much cleaner body coloured trim.

Thanks to the lighter 4 speed manual, the Shoebill S could do 0-62mph in 5.34s and 50-74mph in 2.37s. When tested against the standard model at Bruntingthorpe Proving Ground it managed to hit 180mph, but engineers predicted it could hit 186mph with a bit more runway. In the 1/4 testing it achieved an improved time of 13.27 seconds.

Upon testing on the Airfield Track, the S model got a time of 1:21.74, only slightly better than the standard automatic model. But the Shoebill Sport delivered a much more driver oriented feeling over the less feeling the Standard had.

Besides the body-coloured trim and “S” badging, the sport version was not too different from the standard, other than it being a bit more rugged and not as comfortable.

The Shoebill SL (Sports Luxury) was a tier up from the standard and sport models, being a limited production with a plush hand-made interior with a larger focus to the front, being a 2/2* seater. Along with this it gained a more stylish chrome trim on the front and rear to show off it’s grade.

By the time it was the early 80’s, the Taygeta was in need of a minor facelift and upgrade to compete in the GTP market again, having updated styling on front to rear and a bit of a performance tweak, the Taygeta facelift was prepared for market in 1982.

This time around however, a hatchback variant was also added to the lineup, being a more family friendly kind, and slightly more easier to drive and park. If you can call a 3.7L V12 family friendly that is…

Smart use of that badge as a tow hook on the Mythos!

To compete in the higher class Group B series from 1982 onwards, the Taygeta Group B was created. A completely mental 480hp+ hatchback with AWD and lightness on it’s side over other heavyweights.

The road version or homologation model was tweaked and made more cozy by Arion’s Cosmos design department, featuring their badges and wine-red/purple hue colour. The road version even retained the same engine exactly as the Group B spec car, which also retained it’s low reliability, yet kept it’s highly desirable point to collectors and fans all around.

Come 1983, Arion wanted to produce a more affordable sports supercar for the market coming up with a nifty rear engined lightweight named the Starling. With futuristic, sci-fi looks, the car gathered quite the attention, it even has a 300hp V8 powering it, giving it stand out high end performance.

The design of the Starling is standard speedy wedge shape, with boxy trim and a unique side window as well as removable targa glass roof top. Keeping up with the Arion prestige was not short as the interior had luxury comforts like plush leather seating and high end cassette player.

Thank you very much! It was quite interesting to make the exhausts how they are, quite a bit of layering went into play. :3

With the first generation Pelican put to rest in 1978, the second came to be in 1983 with a vast redesign. Alongside the others in the muscle based trio, the Pelican was the final to get a second version in the 80’s. Being the larger and more executive car of the lot, it was much more expensive and luxurious both in production and price.

Akin to the first generation Pelican, the second features an all new V12 with over 300hp to boot, giving it’s 1731kg weight a much easier pull. The newer space age styling certainly made the Pelican II look up to date, with it getting a reputation for being stand out in a crowd of other luxury cars from the year.

The interesting styling wasn’t just all for show, thanks to the aerodynamics of the Pelican having a full flat floor, wheel spat/cover, and hidden fuel cap on the c-pillar behind the badge it helped the car be able to reach over 160mph (165mph), and have a much improved MPG of 19.6.