“It’s not any car, it’s an Atom”. That phrase echoed all throughout the 50’s, 60’s, and 70’s. The man behind it, Adam Trent, would go on to become one of the wealthiest business men in America and it was all thanks to his company, Atom Motors.

The History of Atom Motors
Adam Trent was born in 1910 to an overworked father and an alcoholic mother as well as 8 other siblings. From his birth to his teenage years he lived in a small run-down farm house in Mississippi. He only went to school until 5th grade when he was needed on the family farm. In the little free time that Adam had he would read books about cars which he had bought with the little cash that he had.

Fast forward to 1935 and Adam is working as a door-to-door salesman. His current car is a Ford Model A that he bought from an elderly neighbor. One day as he was driving back to his new apartment the engine in Adam’s car seized up, stranding him in traffic. After almost getting hit twice and the loss of his car Adam knew that he could do better. In 1940 Atom Motors was founded by Adam and his friends, Dave and Ronald. They started small, producing only a few cars a month but soon they were making thousands and the rest, well that was automotive history

GIVE ME SUGGESTIONS FOR WHAT TO RENAME MY CARS

Here’s the 1962 Quanta
A new generation of cars for a new and young America. Introducing the all new Atom Quark for 1962. Rebuilt from the ground up with more power, better performance, and a more attractive styling. It’s not just any car. It’s an Atom. 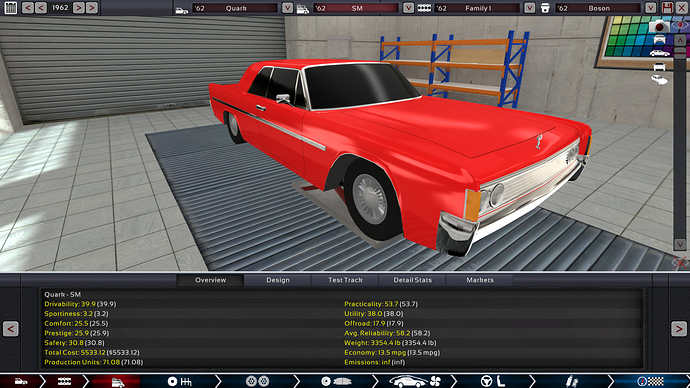 The rear end (I’m quite proud of it 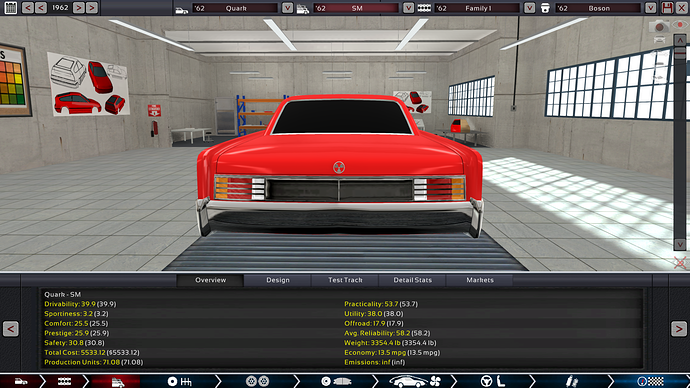 Also, please give feedback so I can make improvements if needed.

It also seems to be built well for the era

Yep, it’s a solid start. I can’t say much on how good the car is because I don’t know what you’re trying to make. Tell us more. What is the point of the car? Why did you make it? Why does it look the way it does? Why did you make the choices you did while building the car?

One other thing: the names you’ve chosen to use.

Quark - has been used by the very well known Baltazar Automoveis so good luck winning the rights on that, you’d best change it.
Neutrino is taken by Centauri again, not a small company.
Rodeo - it’s fine

Some engine specs would be excellent, just to work out how you’re designing those. Other than that, it’s a solid looking machine.

Isuzu Rodeo, if we’re going that far.
I don’t know to what extent name overlap matters, as Suburban has been used by both GMC and Chevy (albeit these two both being GM), Continental is used by Lincoln and Bentley, GTO was used by Pontiac and Mitsubishi, Fiat 500 + Ford Five Hundred, etc

With all respect to Baltazar, I actually hope you don’t change the Quark name, because the irony of calling an American land yacht a Quark is just too fantastic.

That is one handsome land yacht - rename it to avoid confusion with the Baltazar of the same name, give the engine family a proper name, and you’ll have a winner on your hands. At any rate, I would like to see its mechanical specifications, and especially the engine.

I don’t really mind much about using Gamma, since it’s a a company’s name while yours is a car’s name, but I suggest you search at the forum before naming your cars, just to avoid headaches.

About your car I really liked the looks, it’s a rare thing to see a newcomer to be actually good at designing.

Also, please give feedback so I can make improvements if needed.

Something I would do instead of using automation’s default colour is experiment with various other colours from the time period the car is in.

I based the car off of a Buick from the era, mostly the 64 Skylark. The car was created to model a typical full-sized sedan from the era.

Does anyone have any name suggestions? I came up with more names but they were all taken. 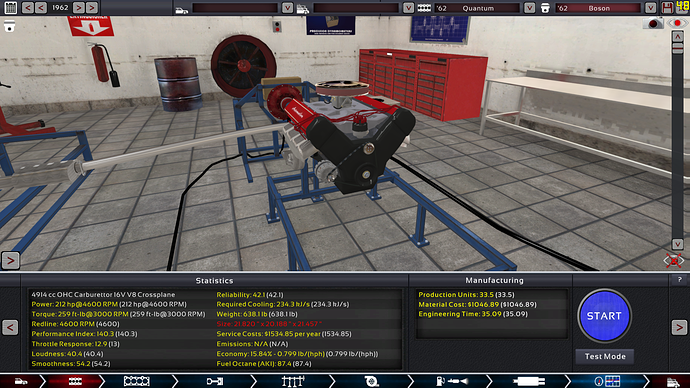 Does anyone have any name suggestions? I came up with more names but they were all taken.

Naming is a hard work here, I had problems with name myself, my most know model, a MR sports car, was named Surge, while the same name was used by another player for a hybrid. What I suggest you is using words in other languages, there are a bunch of people that use latin words (usually italian or spanish), or you can use a random name generator (what I usually do), or develop a alphanumerical naming system, like BMW, Mercedes, Peugeot, Mazda, and so on (what I want to do, but didn’t figured out how yet).

Usually go with your own names, usually with specific meaning, but also don’t go copy-paste

If name occurence will happen, I guess most people won’t bitch about it (look how in real life there are many Ranger-named cars), but dont copy over all the names.