yay I aint ded yet. 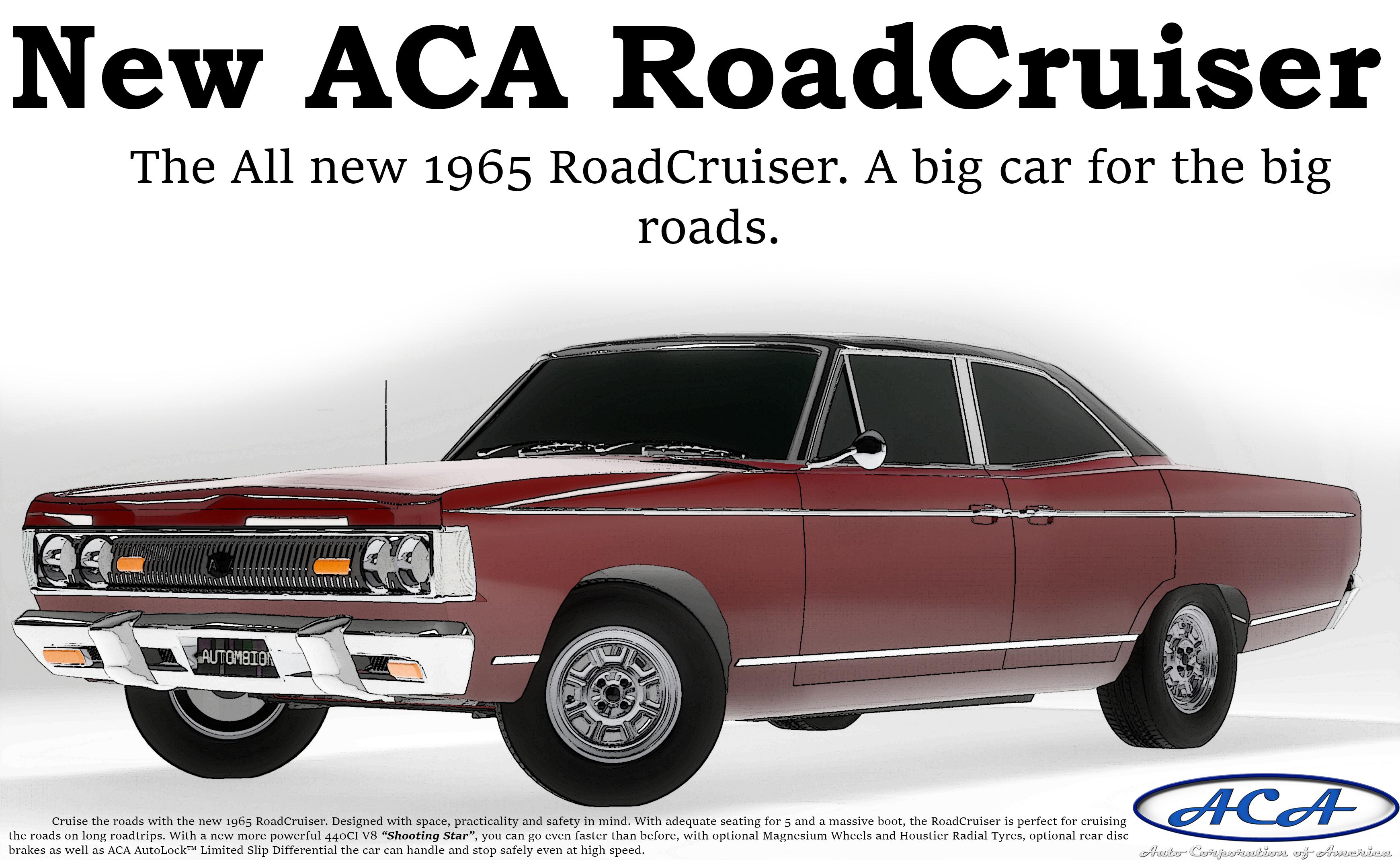 ^An advert for the 1965 ACA RoadCruiser

In 1962, ACA began designing the replacement for the Model 60 Corona.Though a 1963 facelift was on the way, ACA designers knew that the Model 60, based on the Model 51 Corona, needed replacing eventually. Initially, the project was called the Corona II, however once the final draft was made, then ACA CEO Kingston Conway infamously noted that “[its] the size of a battlecruiser” and as such, the name stuck with the car being called the RoadCruiser. 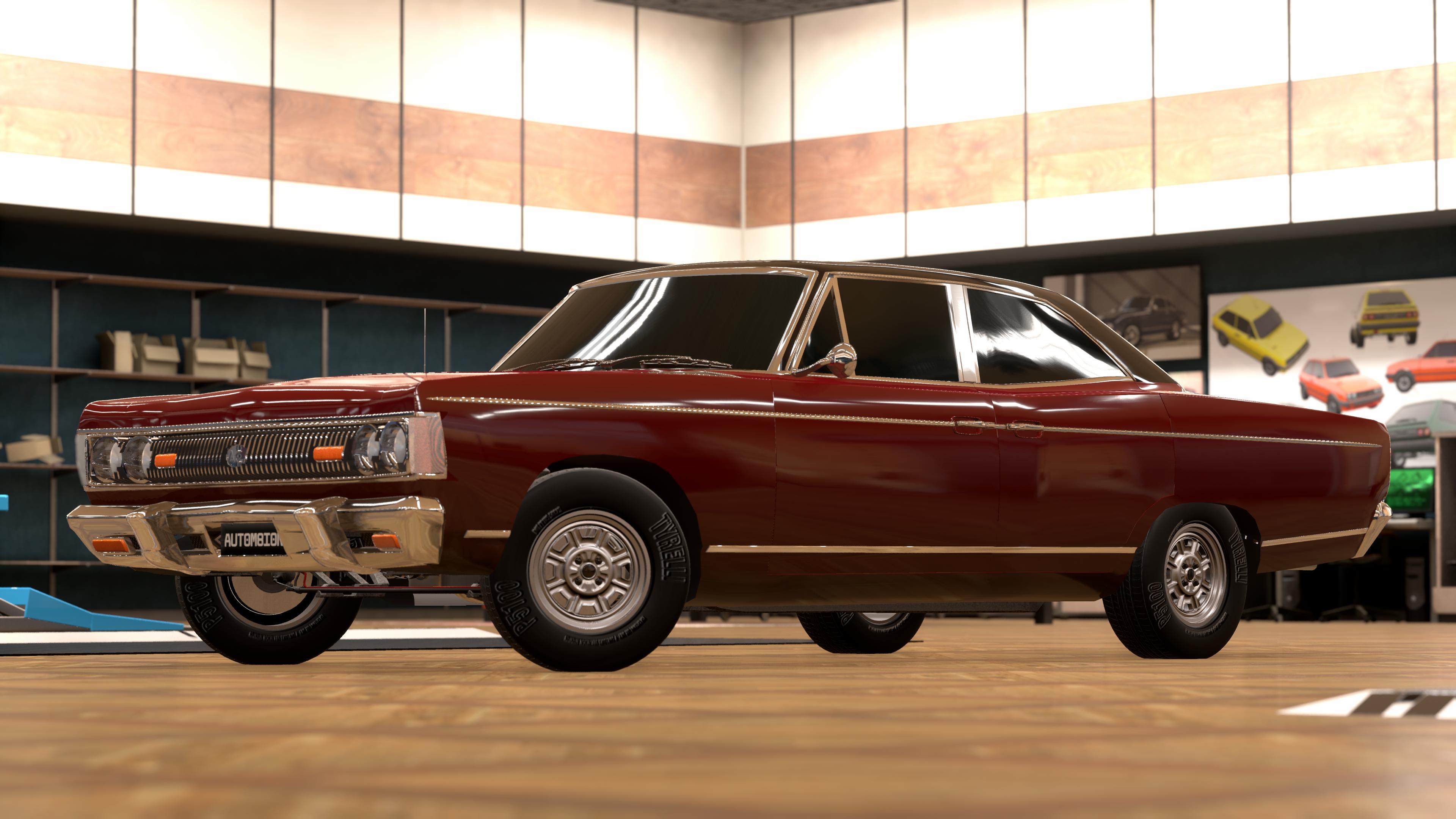 Knowing the RoadCruiser was going to be a behemoth, ACA engineers realised they needed a new engine to drive the car along at a reasonable speed. As such, designed along side the RoadCruiser was one of ACA’s most famous engines, the 440 “Shooting Star” Large Block V8. The large lumbering 7.2L cast block made a respectable 297hp, which mated with the RoadCruiser’s "Power-Shift" 3 speed automatic transmission would send the car to top speed of 141mph and would let the car reach 0-62 in under 9 seconds 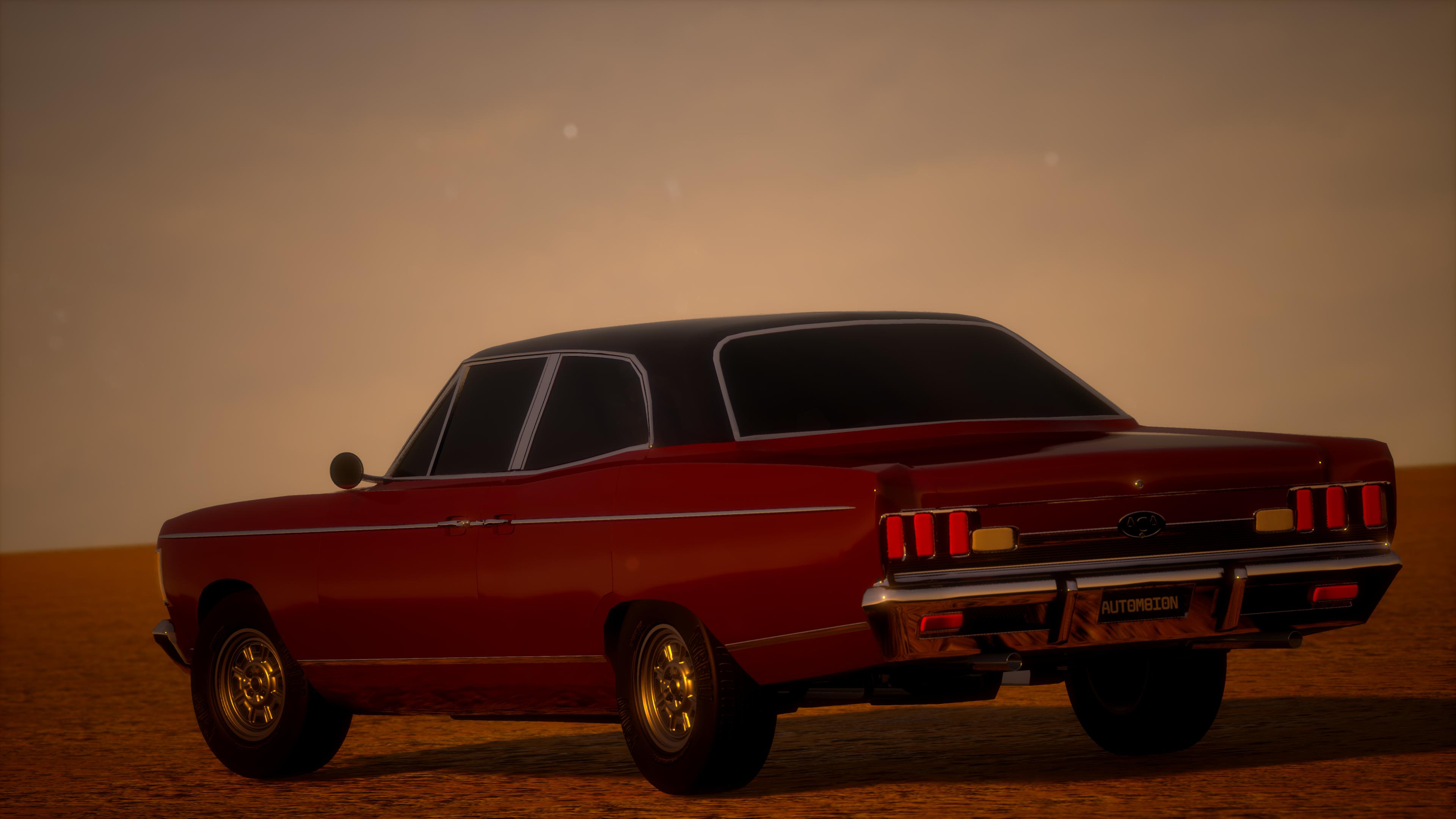 The chassis was an all new ladder frame that was more rigid than the old frame found on the Model 60 Corona. While the new RoadCruiser also used a double wishbone front, leaf sprung live axle rear, the suspension was adjusted to be softer and smoother, allowing the car to feel more comfortable than its predecessor. The interior was nothing special for the day, though the higher end trims featured premium vinyl seats matching the colour of the exterior, a premium dash and two spoke wheel and a premium radio.

A popular choice for many, the RoadCrusier would be made up until 1981 with two major facelifts in 1969 and 1975 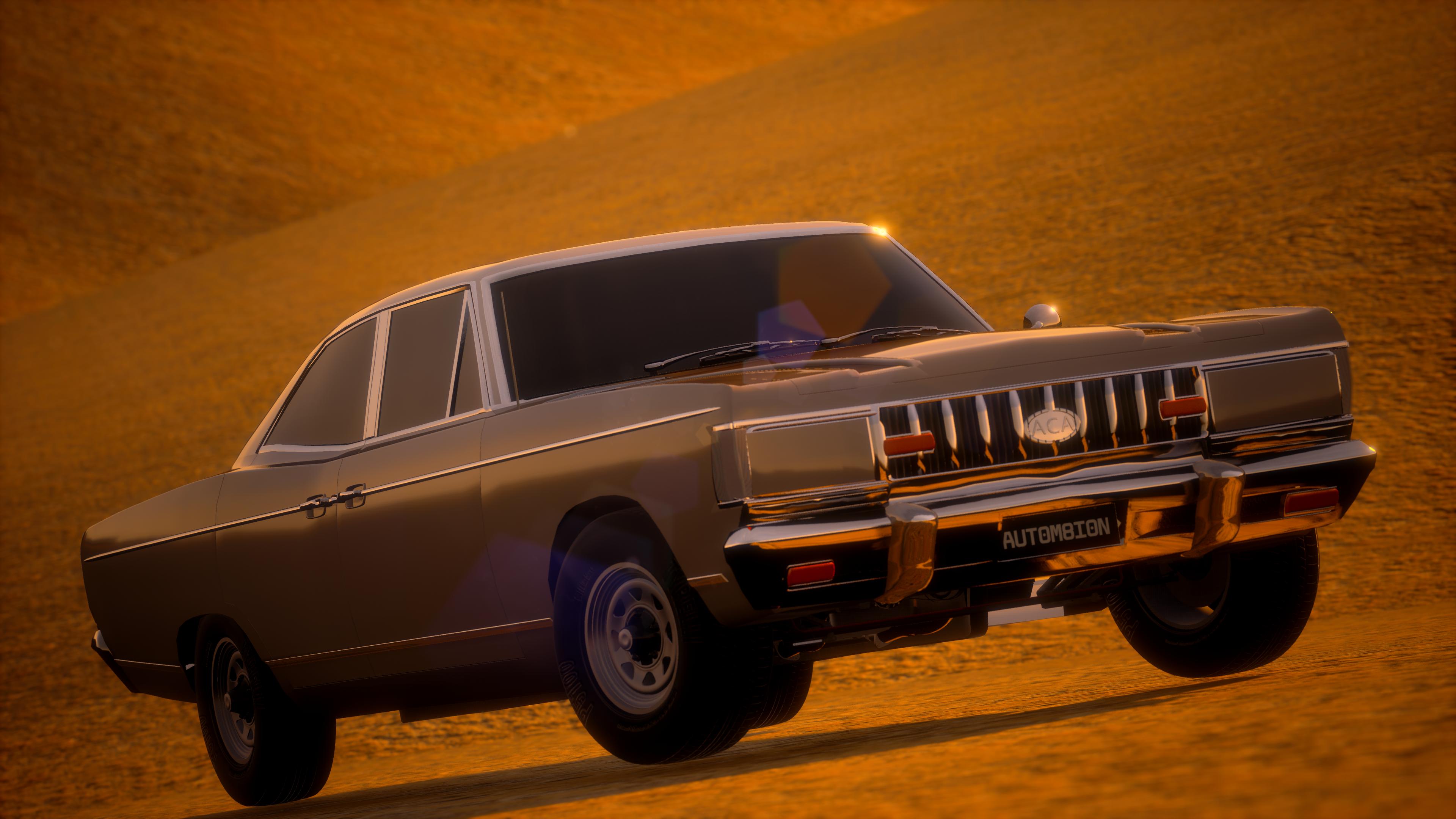 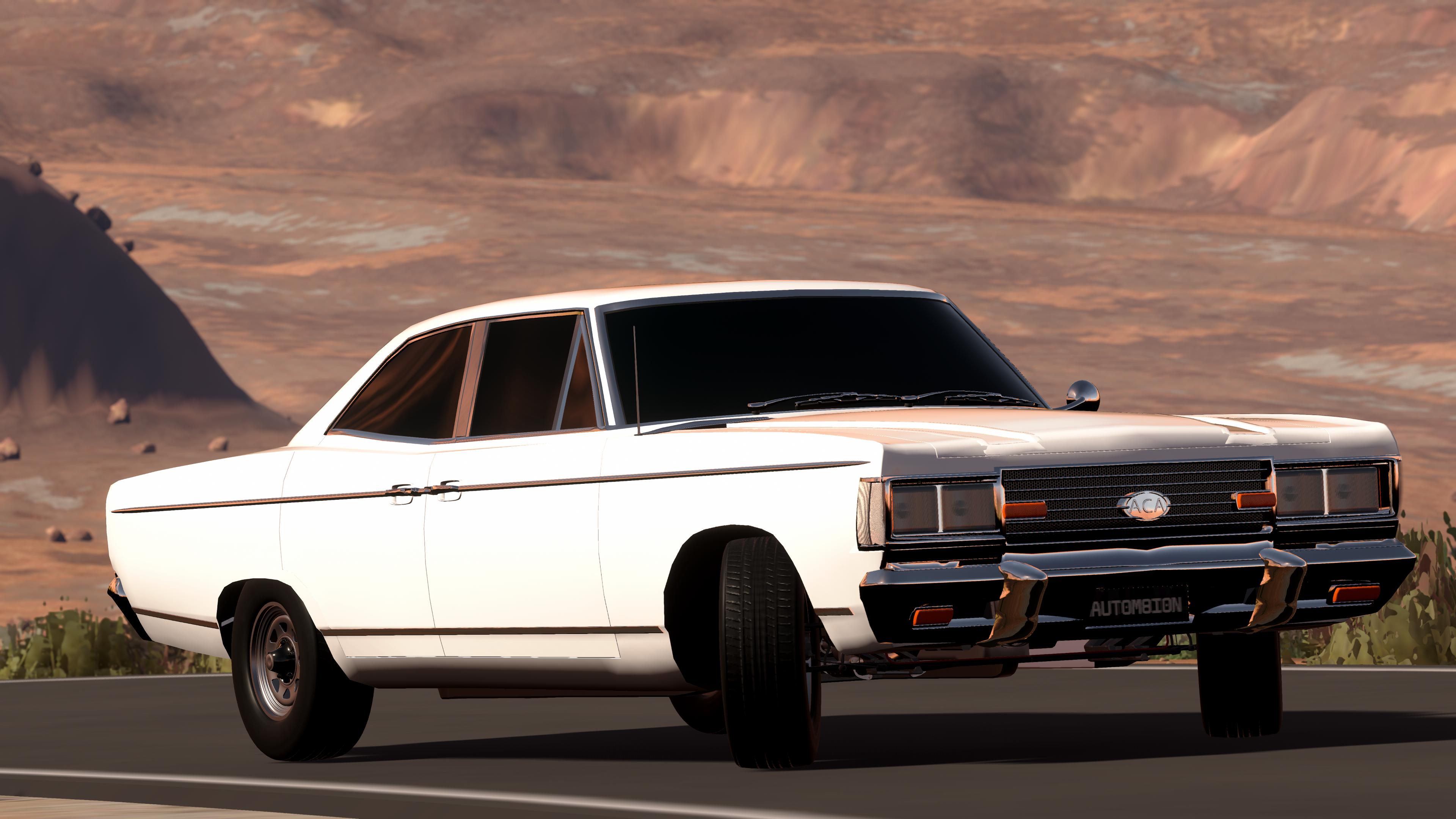 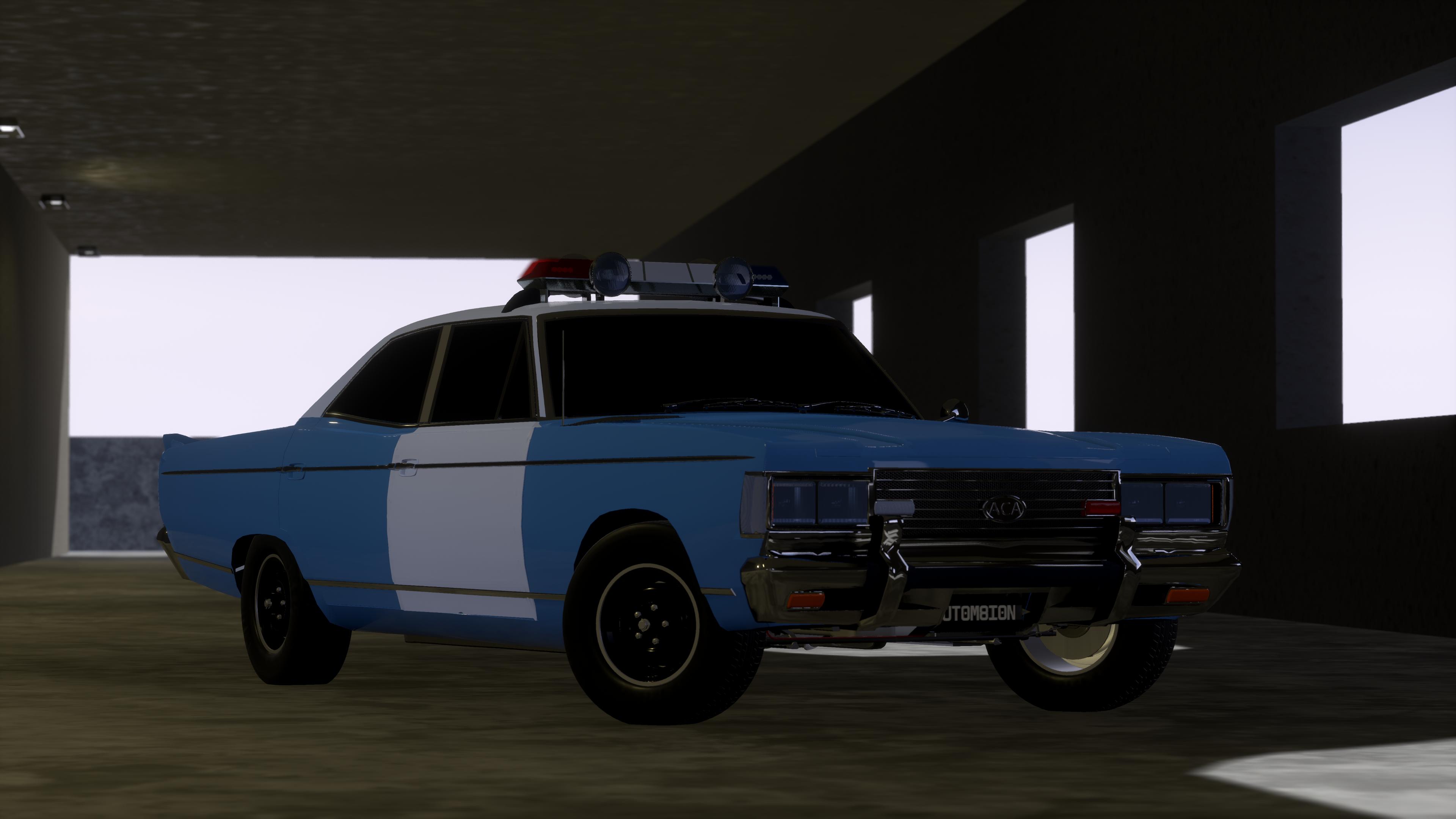 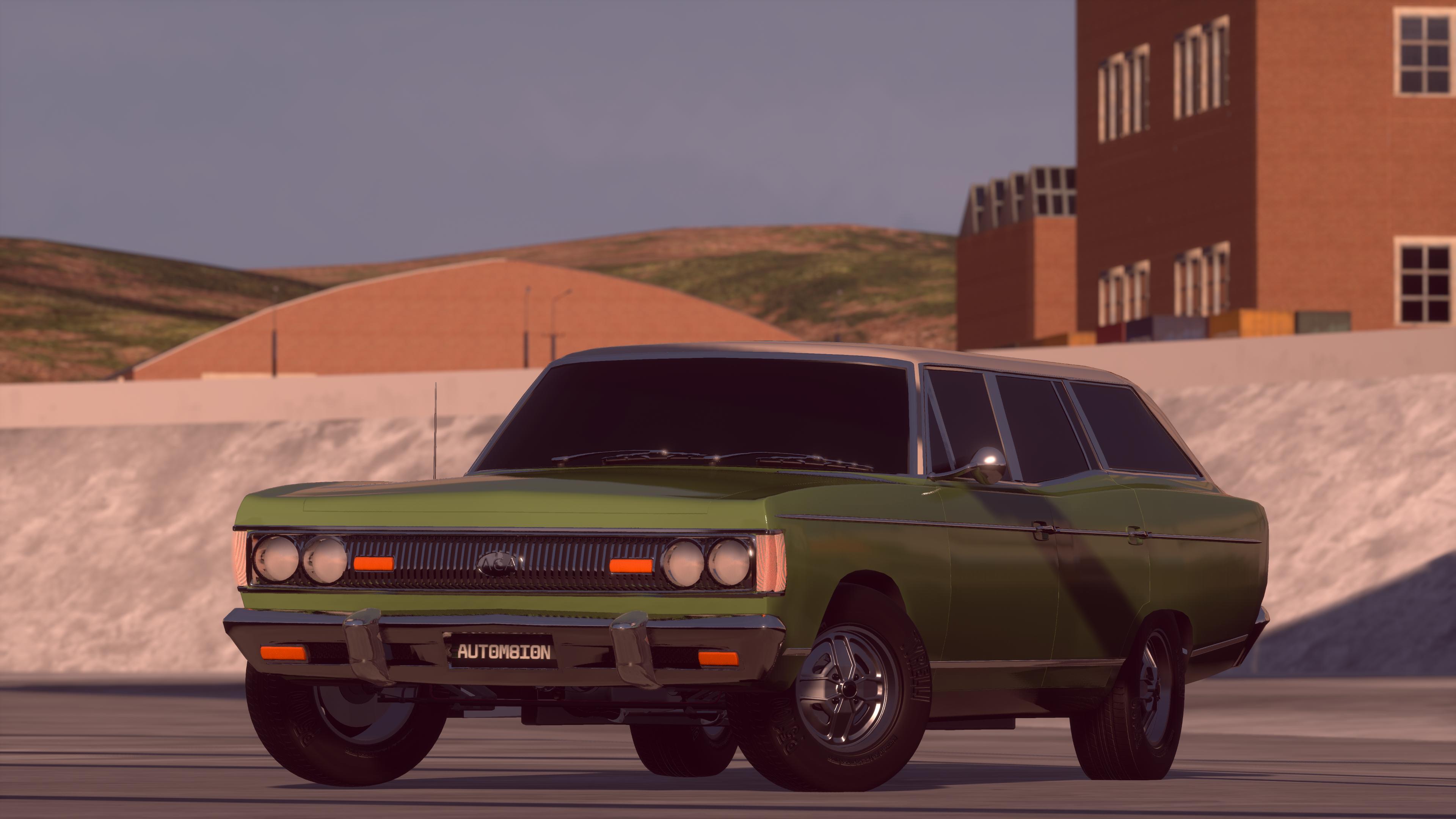 Much like the Model 60 Corona before, the RoadCruiser was also sold as a station wagon called the "Rio Grande. It featured the same engine, same suspension and same interior as the standard RoadCruiser, however the Rio Grande had a large rear door to access the back and could be purchased with an extra rear bench. Highly popular with large families, the Rio Grande would see much profit and would be featured in some high profile comedy films, becoming ubiquitous for cross country roadtrips. 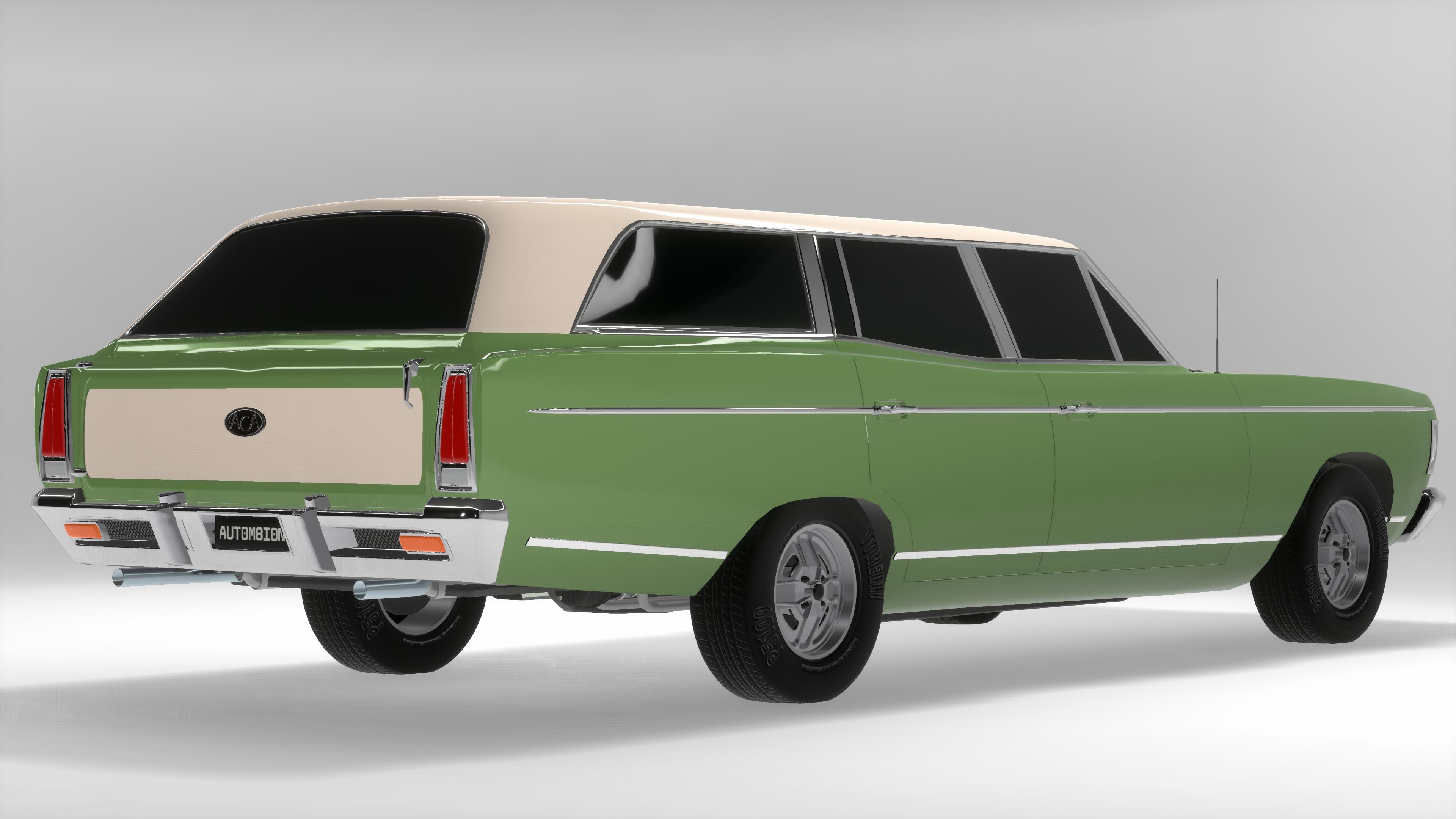 As with the RoadCruiser, the Rio Grande received multiple facelifts throughout its run, though it did last for much longer, being manufactured from 1965 until 1983, though this was mainly due to the ACA executives believing that a large station wagon was an important segment. The Rio Grande would not receive a replacement after 1983 due to the rise in popularity of the SUV. The name would later be revived for ACA’s large SUV in the 90s. 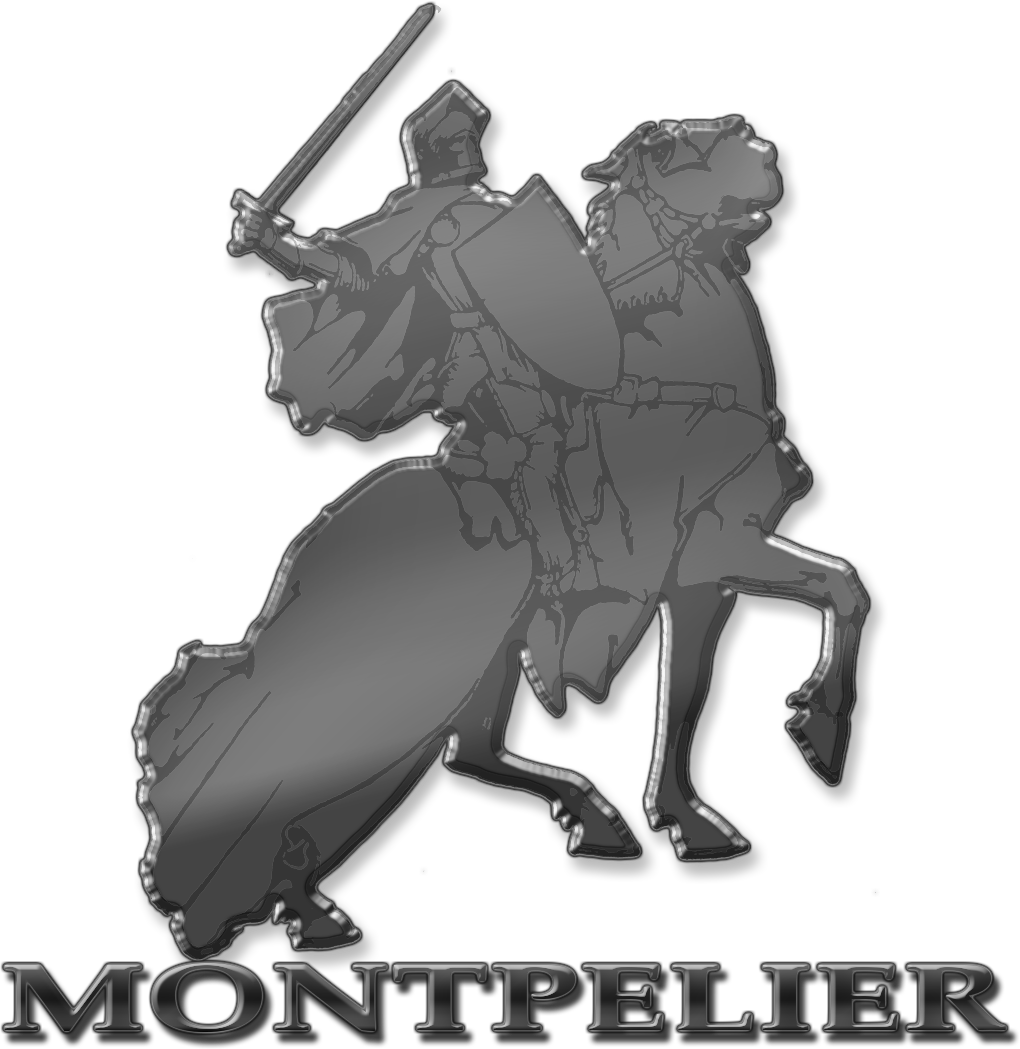 In 1965, Montpelier split their full-size luxury car line into two branches; the regular full-size cars and limousines. With the Crown Cavalry marque being used in the new limousine, Montpelier needed a new name for their latest full-size sedan. As such, the new car would be called the Cavalry. 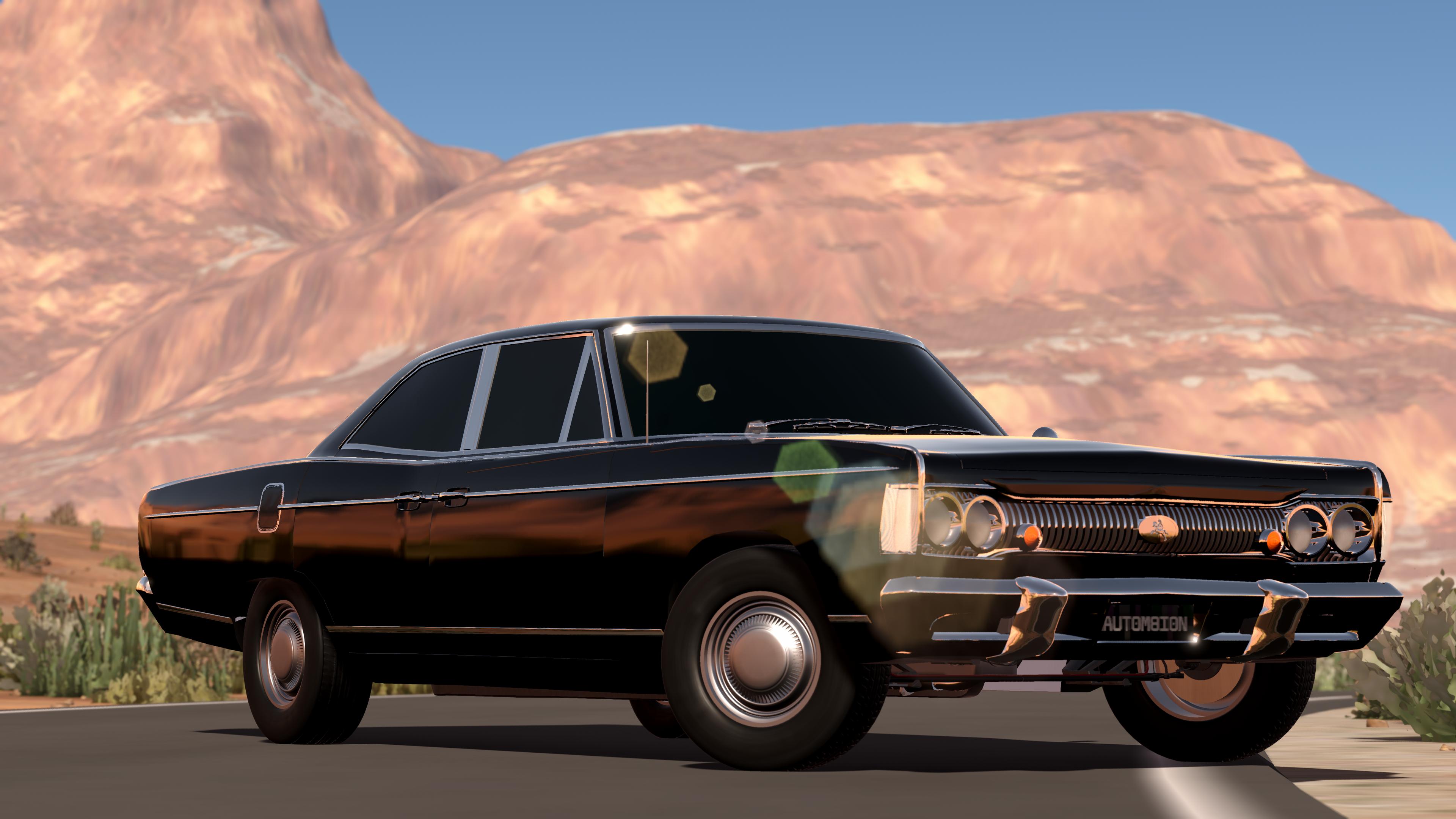 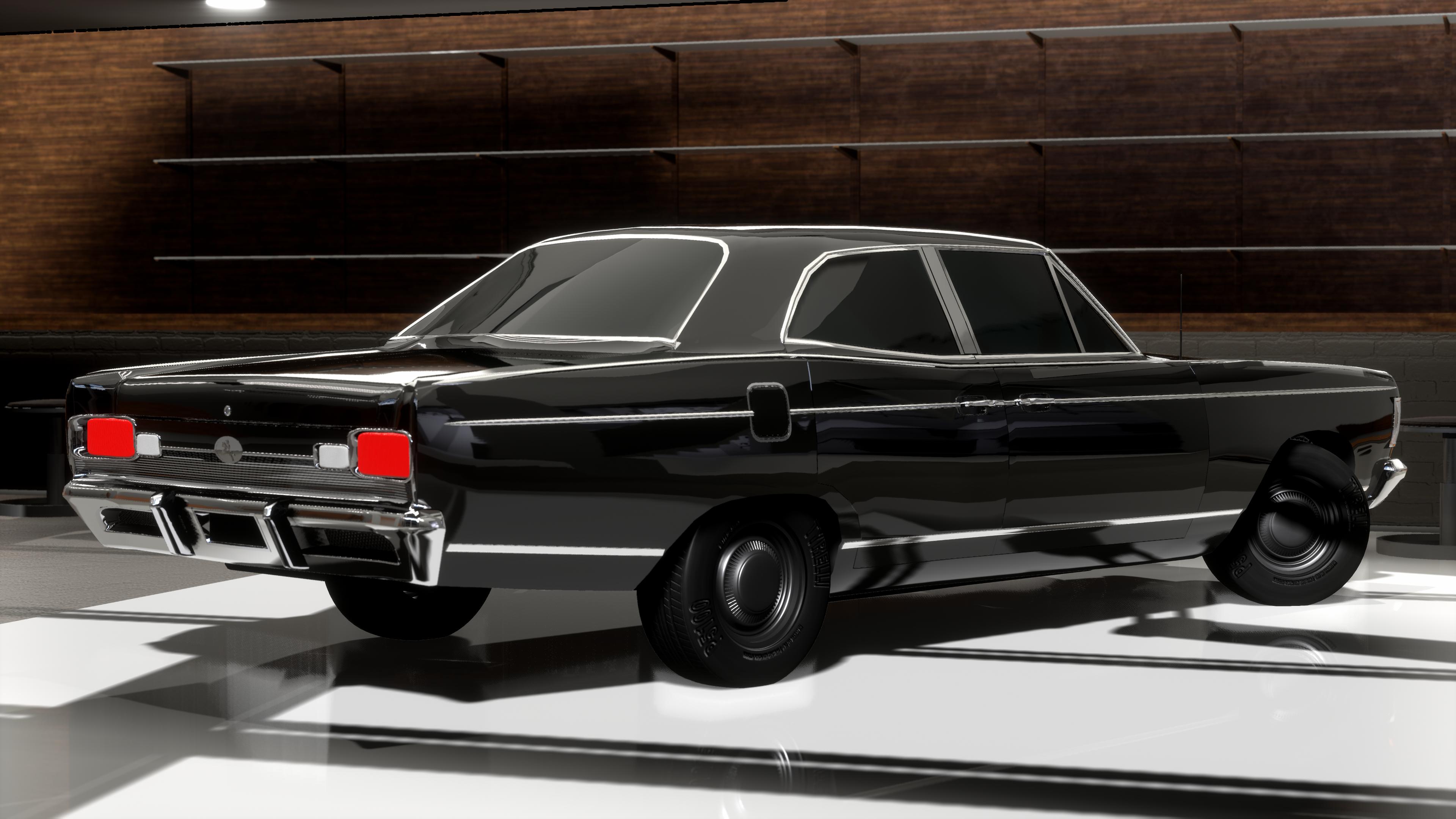 Inside, the Cavalry was nothing like the RoadCruiser. Unlike the premium vinyl seating in the RoadCruiser, the Cavalry had plush luxury cloth and leather seats, AC and heater and a luxury radio set. Suspension was also significantly softened to allow for a much smoother ride. This made the Cavalry one of the most luxurious cars of the time. And since it was practically the same as the RoadCruiser underneath, it also received the 440 “Shooting Star” and could reach 0-62 in under 9 seconds with a top speed of 140mph. 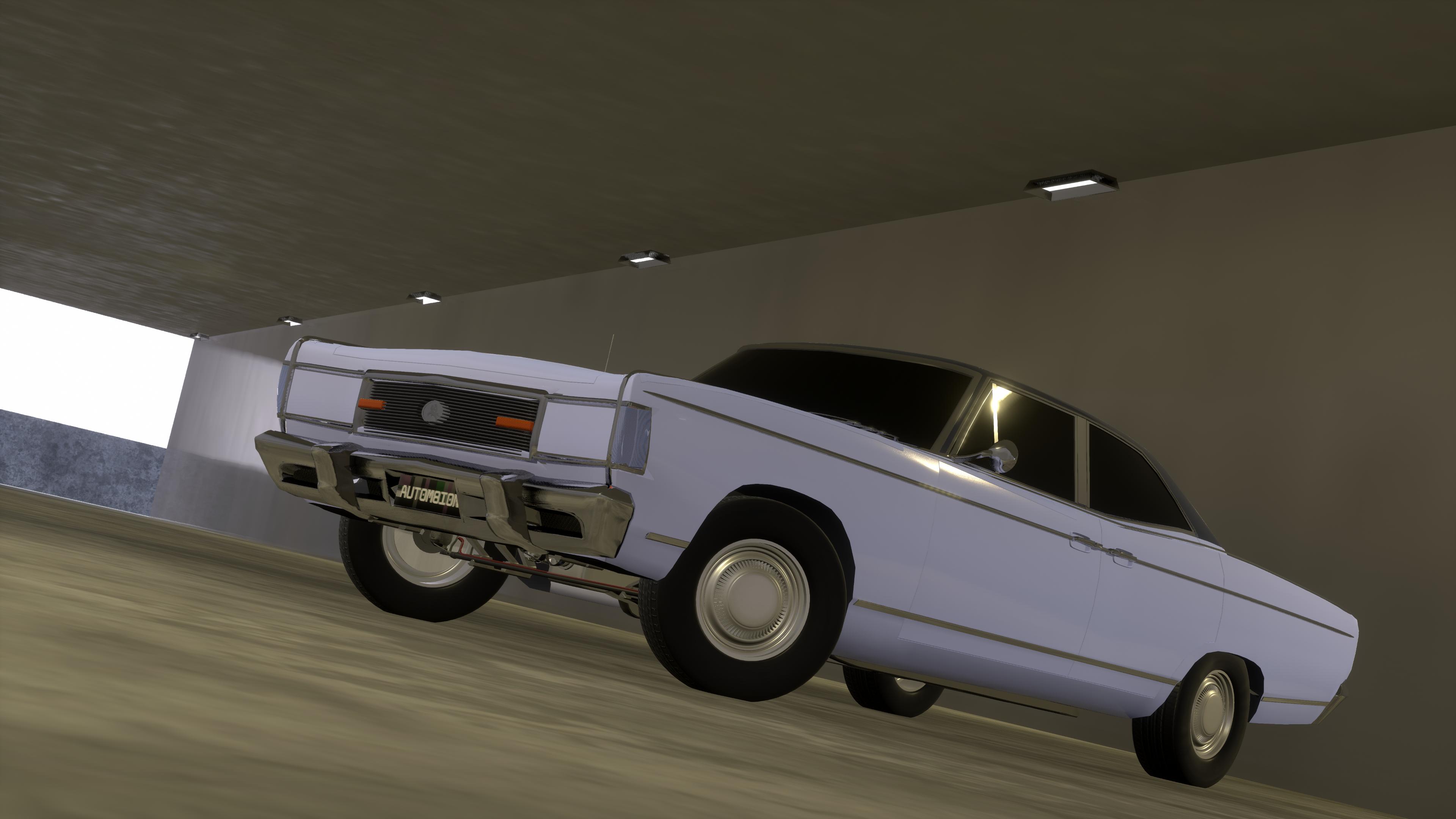 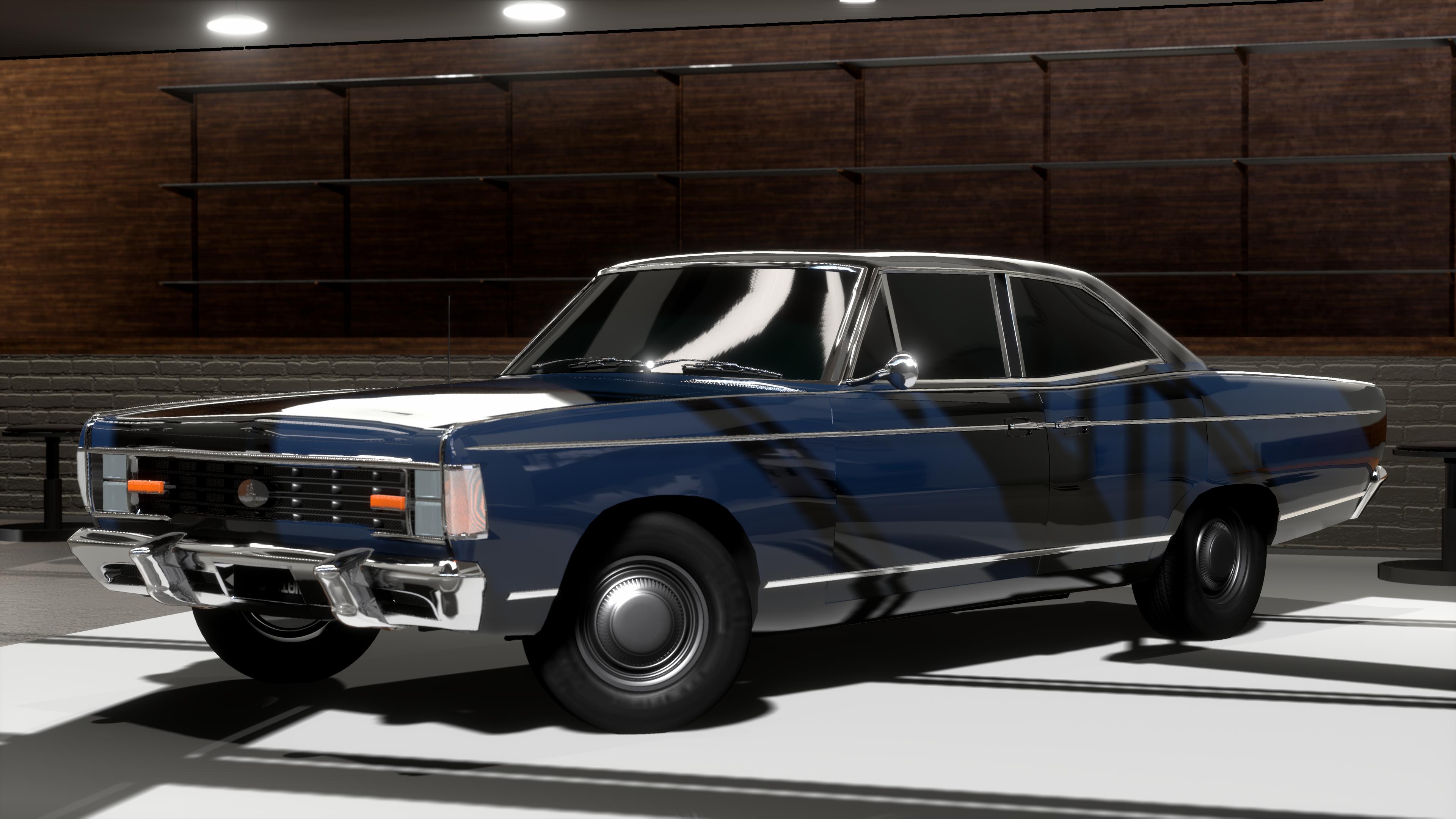 Those cars are very realistic and appealing.

It’s a new year, and well what do you know, a lore refresh. Man this happens every 5 months or so. ACA might as well stand for Always Changing AAAAAAAAAAAAAAAAAAAAAA…well either way happy new year or whatever and lets restart the lore all over again…third time’s a charm right…right?
EDIT: I just realised it was actually a year go that I made my second take on this car’s lore…what a coincidence. 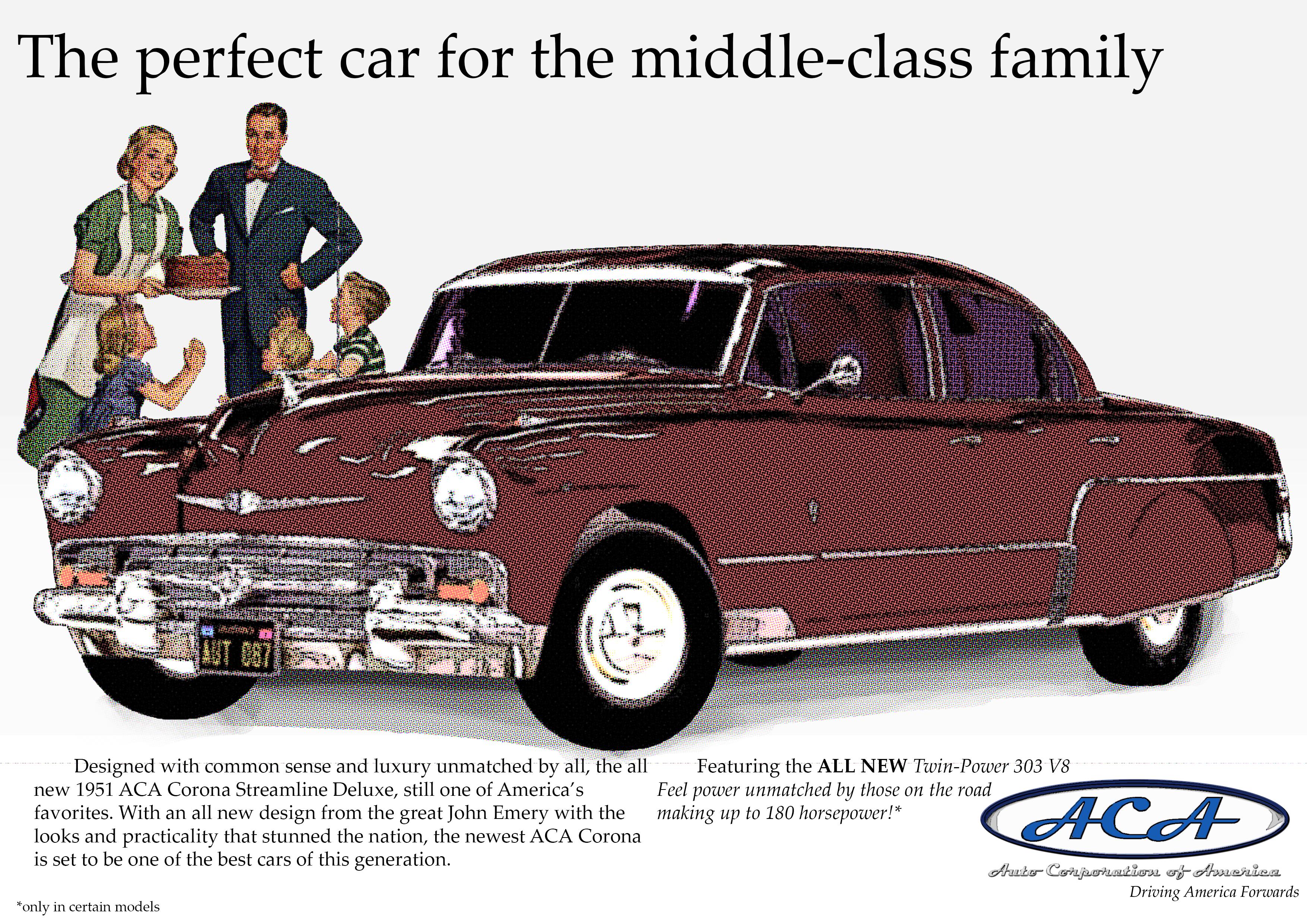 An old 1950s magazine advert for the Corona Streamline Deluxe 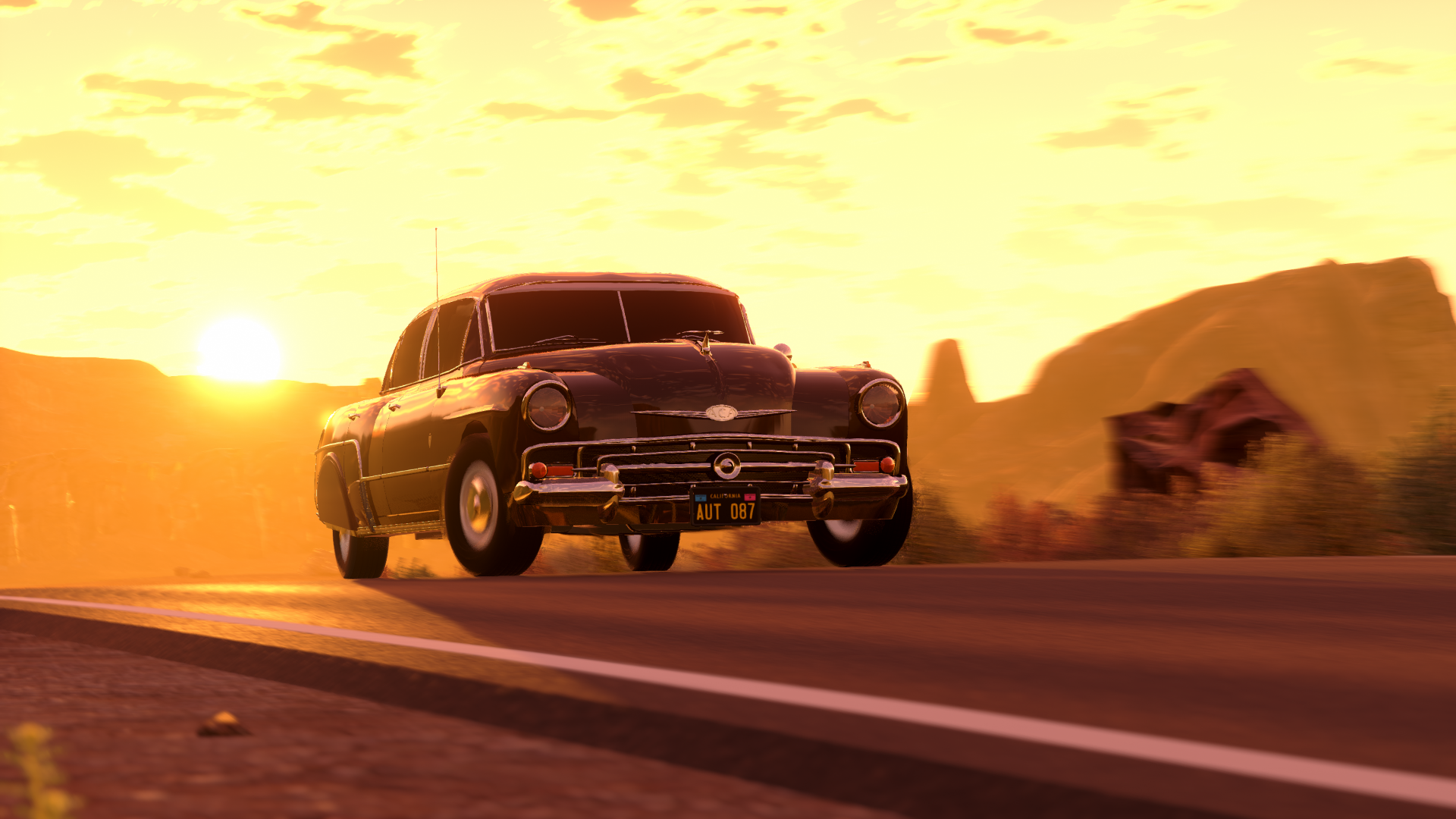 Compared to its predecessor, the new '51 Corona was a lot larger and more spacious. Critics lauded it for its ride quality and comfort. This would be attributed to the new chassis, which was a lot more rigid and stable. However, with the new reinforced chassis and larger size, came more weight. A lot more weight. The old ACA inline 6s and V8s were deemed too underpowered to move this behemoth of a car, as such, two new engines had to be developed: A 226CI inline 6 and a 303CI V8. 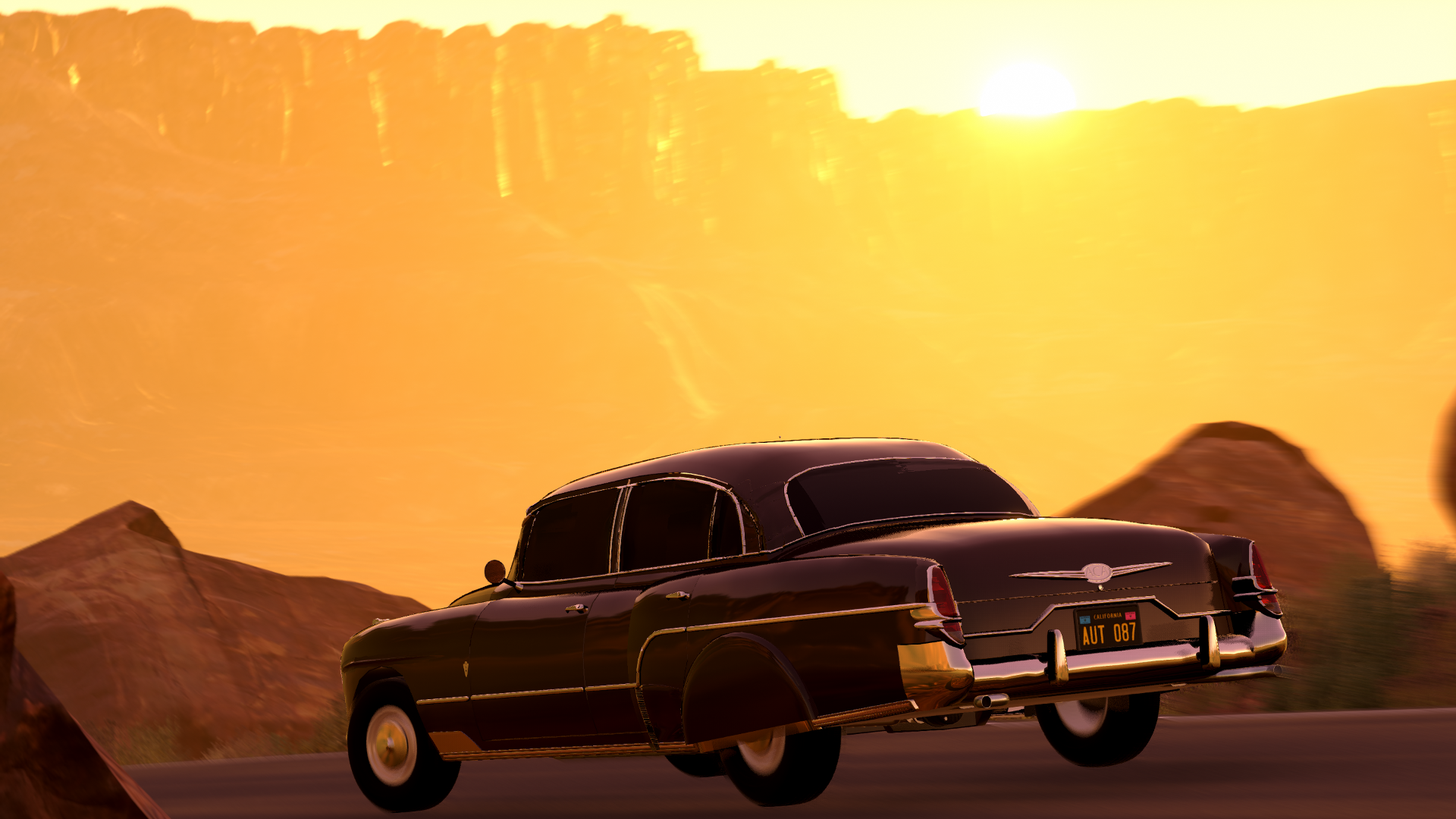 The Corona would come in multiple trims, with the lowest trim level being, the Corona Fleetline and the highest being the Corona Streamline Deluxe, as well as multiple body styles, including a two-door sedan, a coupe and a cabriolet. A wagon based on the '51 Corona would also be made and renamed the ACA Rio Grande. Throughout 1951-1956, the Corona would receive minor revisions and facelifts. 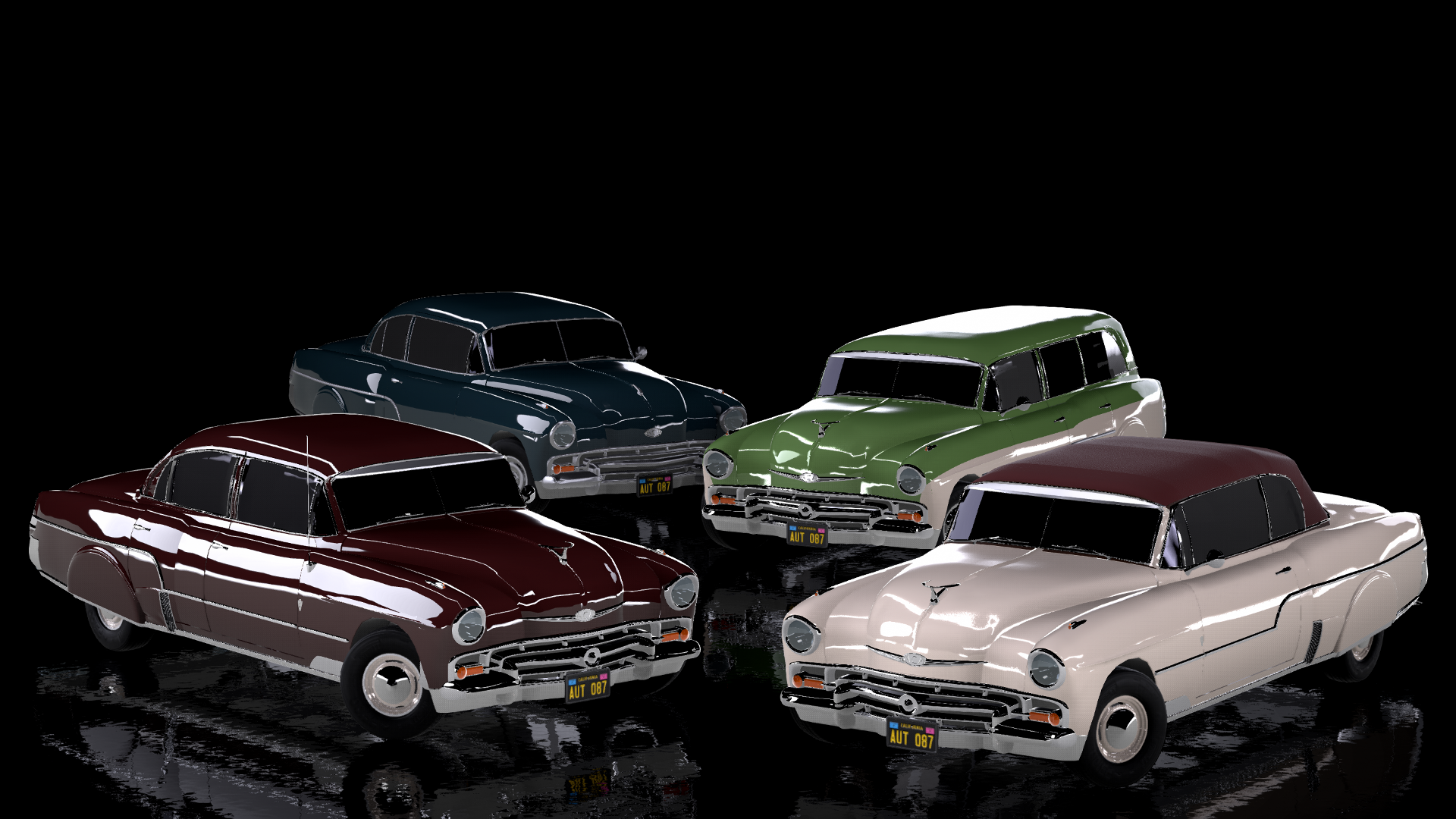 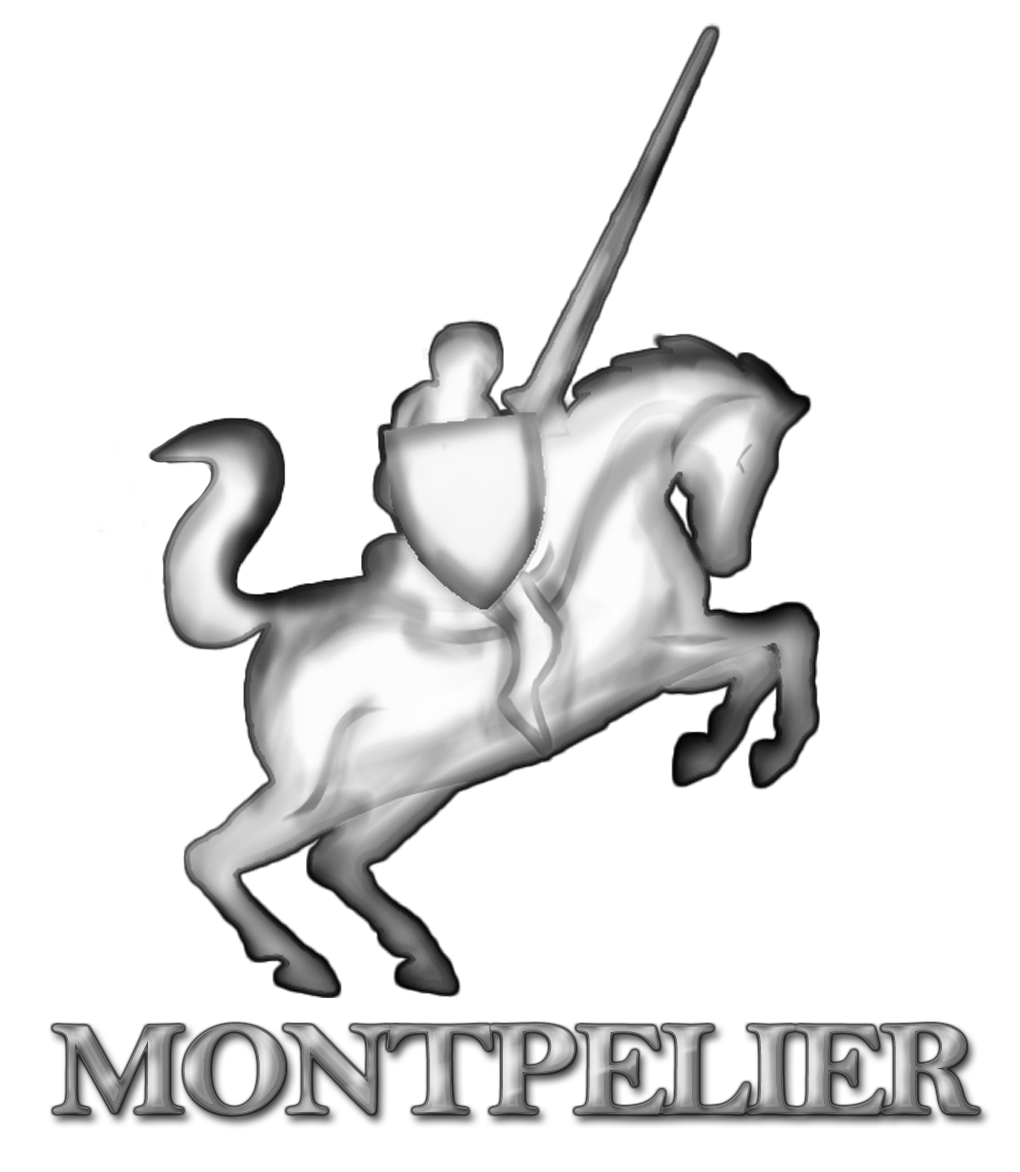 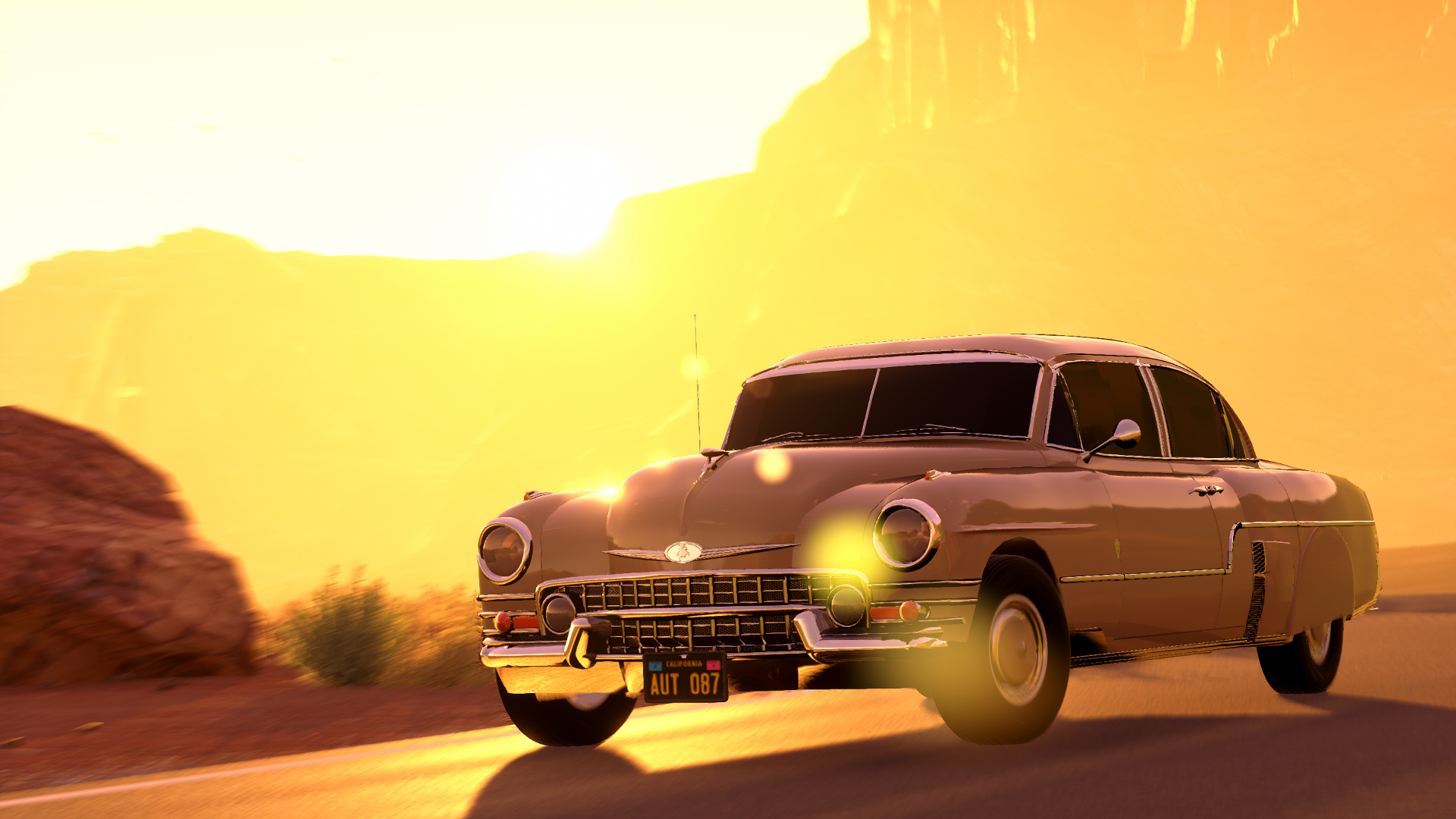 As with its predecessor, the '51 Corona would be badge engineered by Montpelier to become the more luxurious Crown Cavalry. Introduced as the ultimate American luxury sedan, the '51 Crown Cavalry wowed the public with an unparalleled level of luxury. The already smooth and comfortable ride of the Corona was further enhanced by Montpelier engineers who tweaked and modified almost every component from the Corona to make the Crown Cavalry as luxurious as it could be. 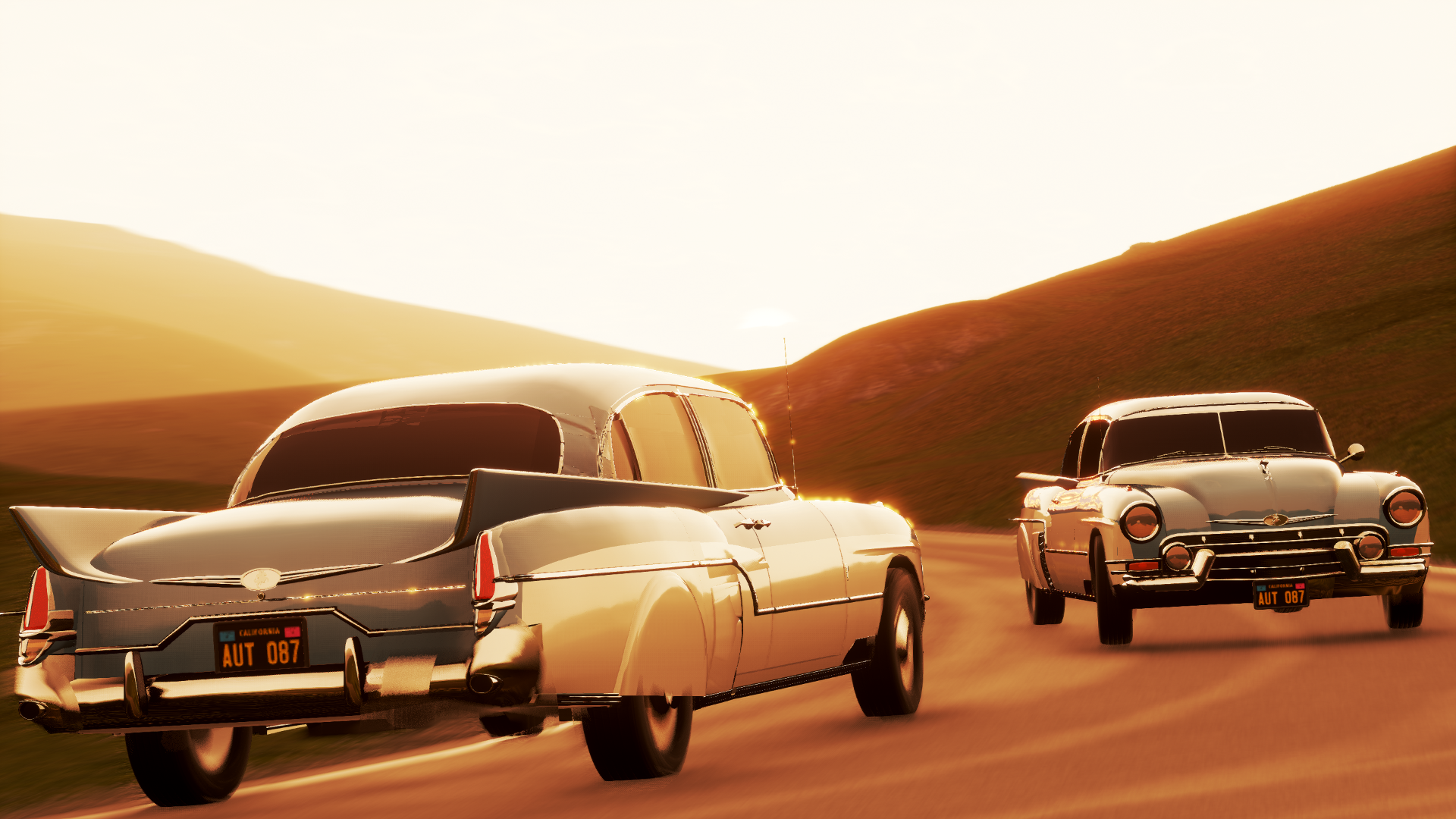 The Crown Cavalry came in many body styles including a sedan, a coupe, a limo and a cabriolet. Unlike its ACA counterpart, the Crown Cavalry would receive a major face lift in 1953 which updated the styling as well as the interior. 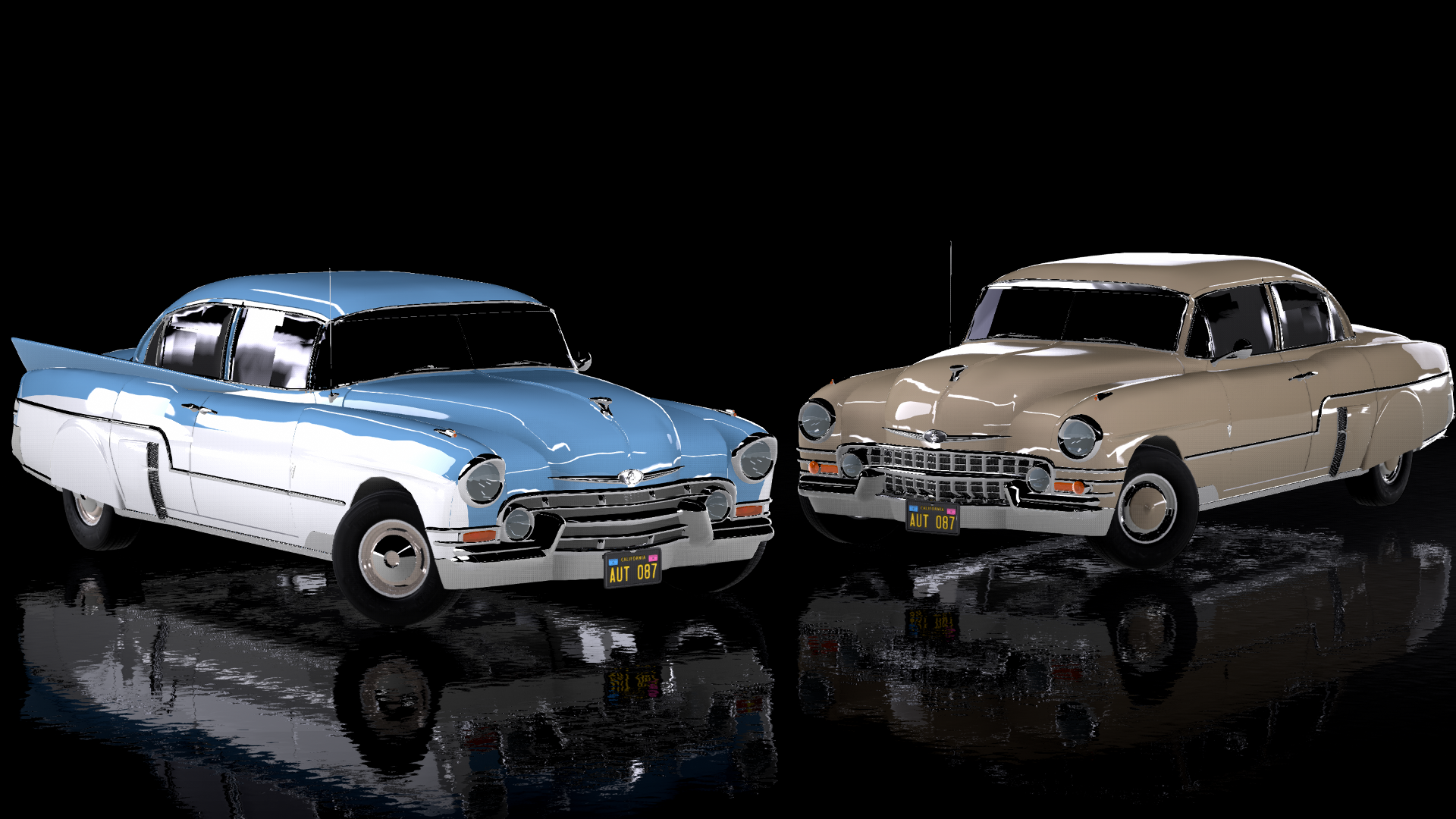 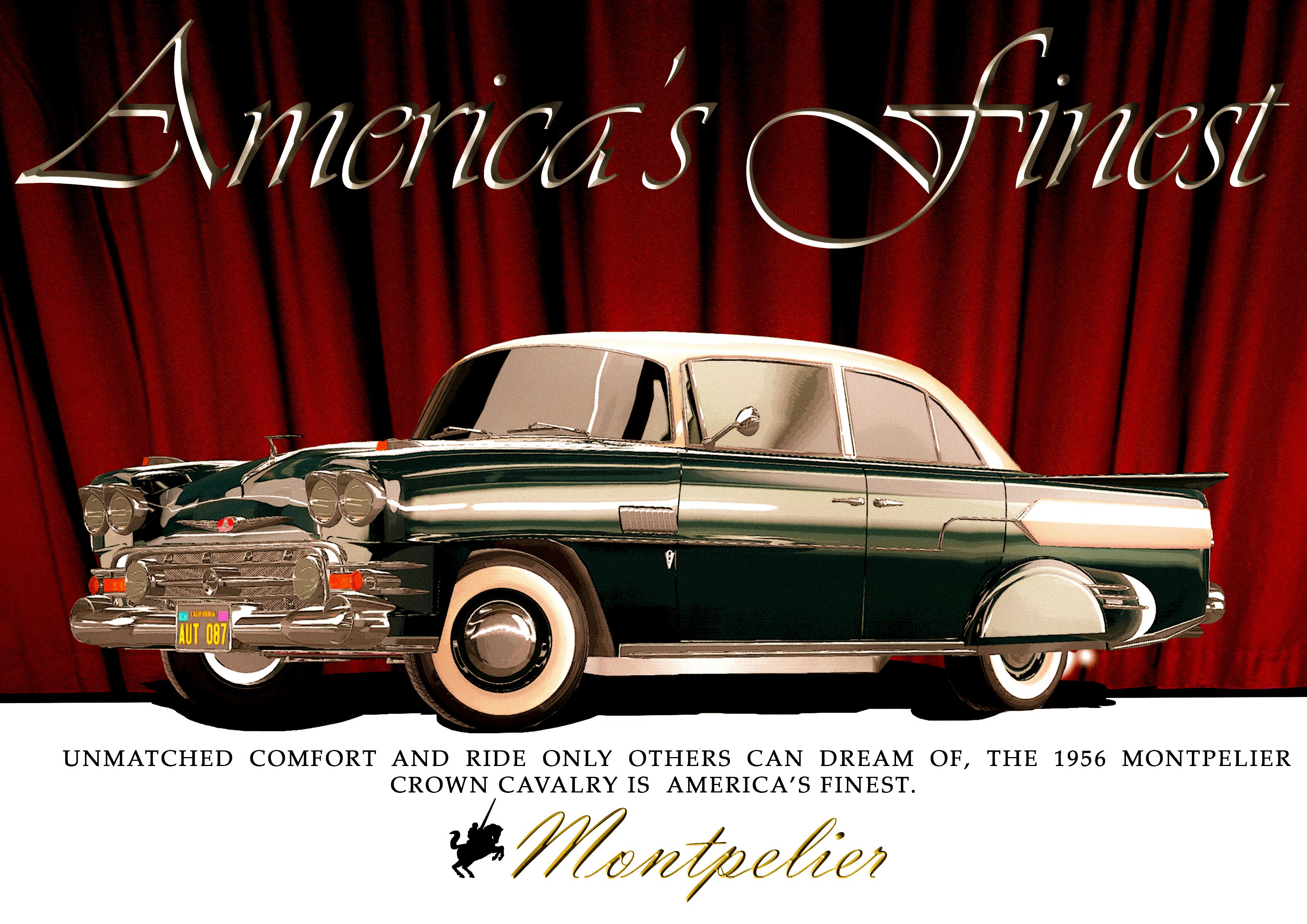 An old 1956 magazine advert for the Montpelier Crown Cavalry

Restyled as part of an overall 1950s refresh in 1955, the “new '56” ACA Corona was little more than a facelift of the older '51 model. While the chassis remained mostly the same, some changes were made to improve it. The rigidity was improved with the help of reinforcing beams places along the frame and the front and rear suspension mounts were modified for to use the newer improved suspension units developed for the ACA Starfire. 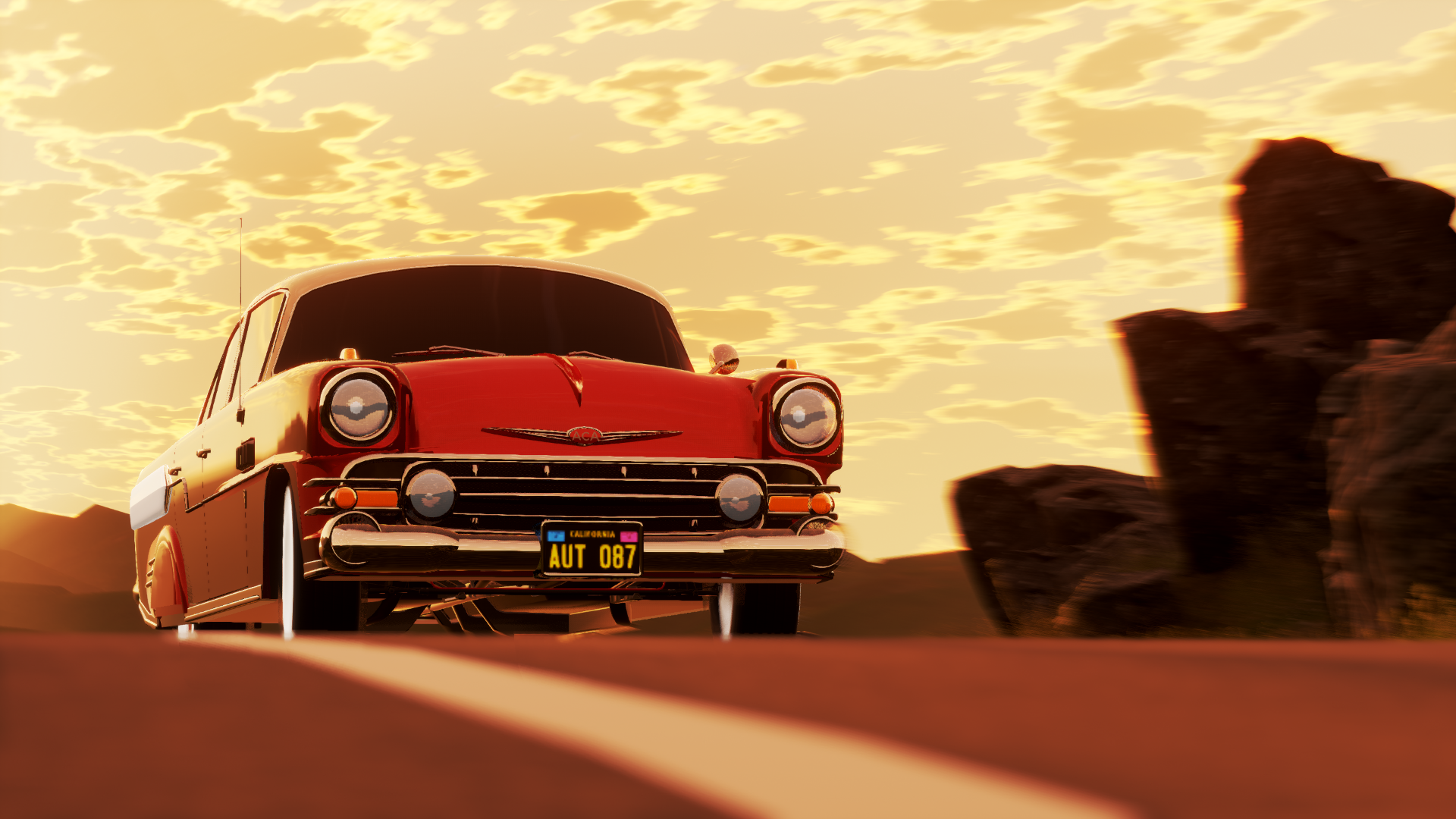 Under the hood, the 303 V8 received an overhaul with an updated version of ACA’s patent “Twin-Power” carburettor which drastically improved reliability with some increases in performance and fuel economy. The 226 straight 6 was also updated, though the Twin-Power option for it was removed and replaced with a much cheaper and economical design. The '56 would also be the first ACA to be fitted with an automatic gearbox 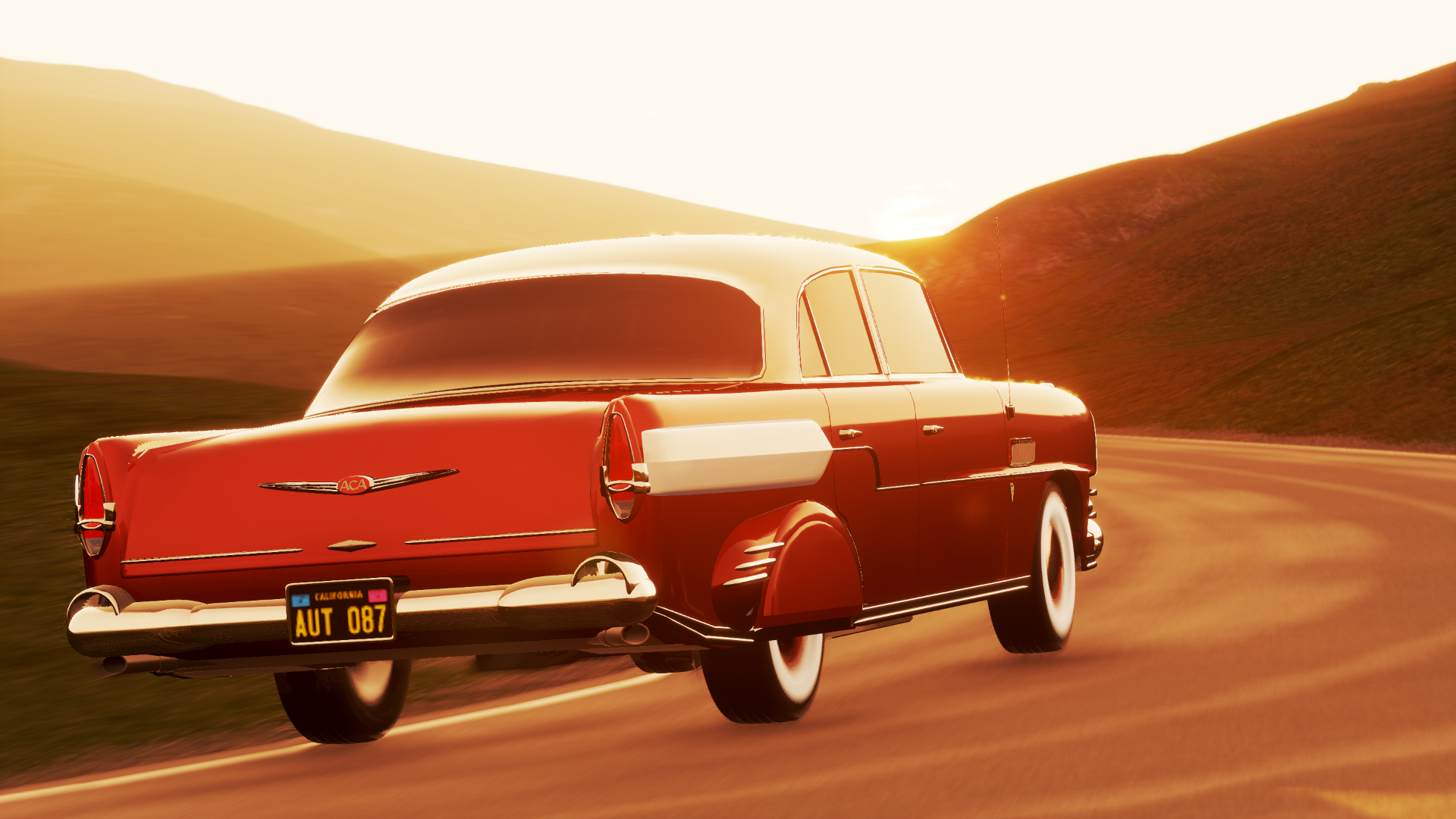 The biggest change from the '51 model was the styling. John Emery, ACA’s lead designer had passed away in 1950 due to health complications. Emery’s replacement was the young designer, Aleichem Ackermann. Many were skeptical of Ackermann’s skills, however the critics quickly warmed up to the young designer when the concept design for the '56 Corona was unveiled in the New York Auto Show in 1955. 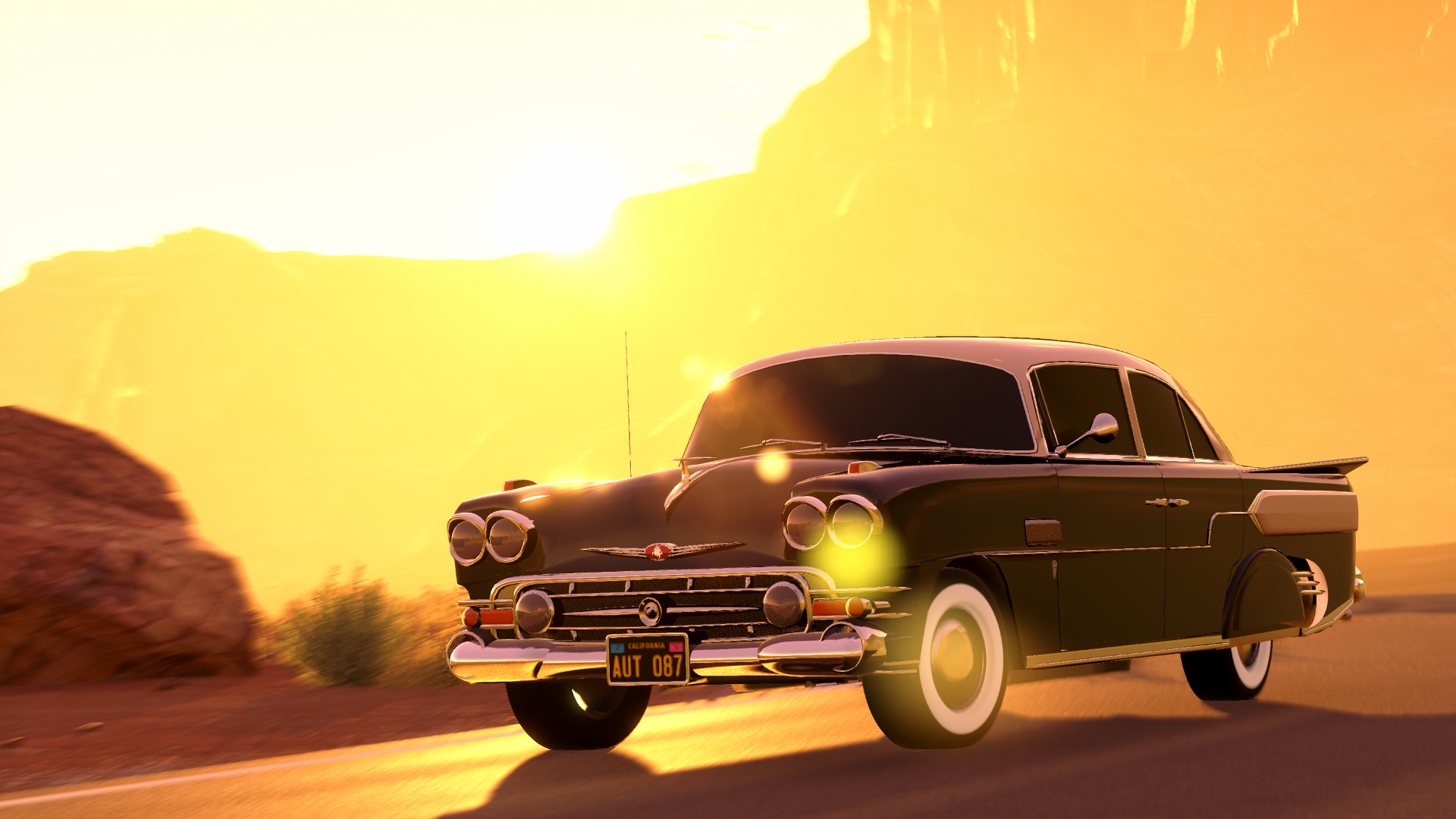 The changes made to the ACA Corona would also be implemented on the ACA Rio Grande as well as the Montpelier Crown Cavalry, the design of which would also be drafted up by Ackermann.

Overall, the '56 Model Corona and Crown Cavalry would be best sellers for ACA and Montpelier. While competition from other US manufacturers did impact sales, especially for Montpelier, the '56 Corona would be lauded as one of ACA’s best cars for many years to pass. 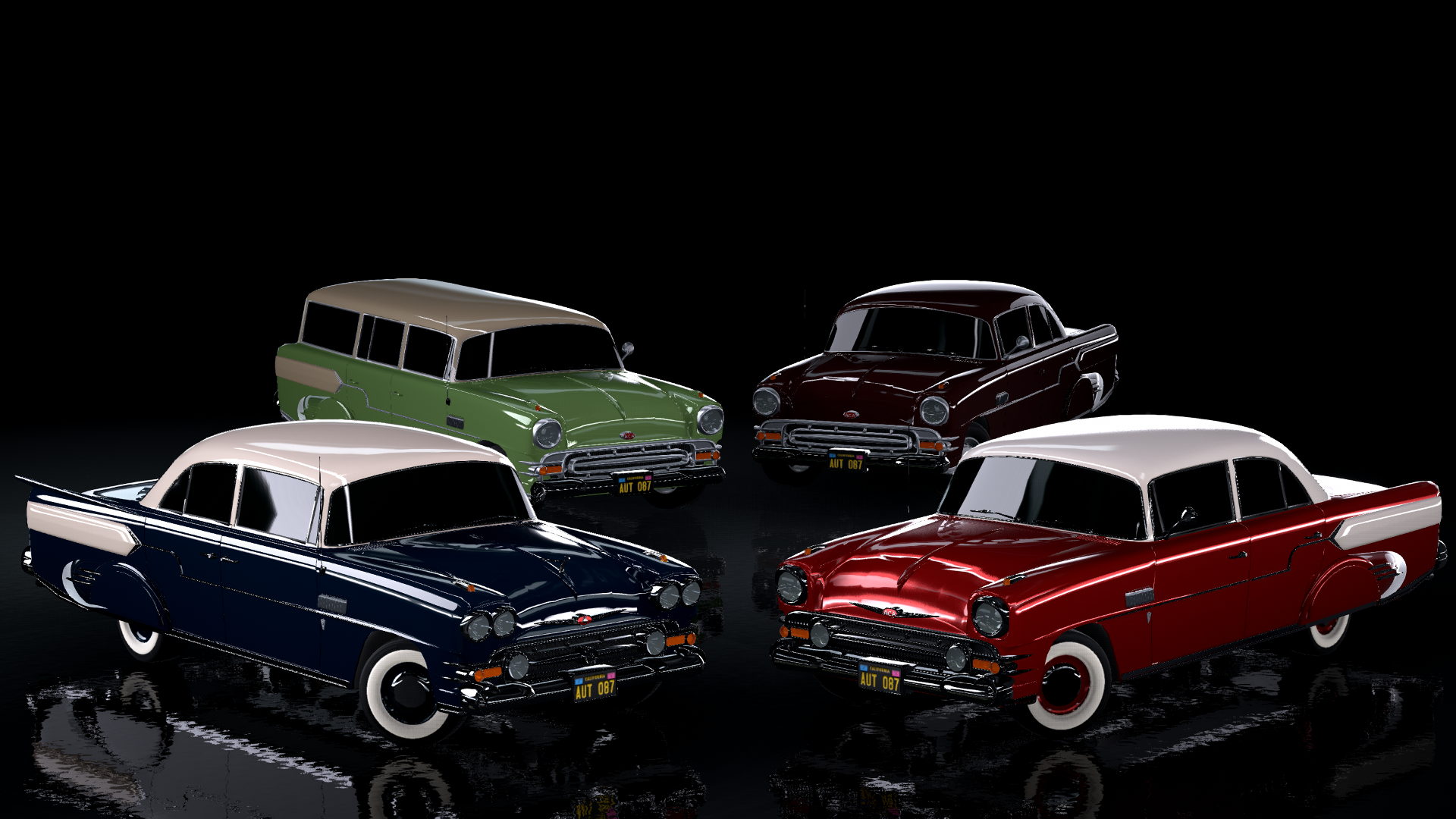