Jeez its already been another too long. WTF is wrong with me?

(Actually no don’t ask. The answer is too long)

Even more raw and to the point. I’ve been hesitant to take this approach for… personal and um… quite frankly stupid reasons – part of that way too long answer – but I think that is sort of where this should have started anyways?

I wouldn’t mind, as long as I can watch the streams after they’ve gone live. Sometimes I don’t necessarily notice a stream right away, and sometimes I just don’t have time to watch it live.

I’m all for it. Just an important note: test your stuff beforehand and test after any major mods / updates / changes.

I recently had problems with my own beam/automation stream and found it was due to a visual mod I had installed on beam.

I would like to see that happen, would be more authentic in terms of actual first impressions. as findRED19 said, test stuff before the actual streaming for bugs.

can someone tell me how to PM so I can submit my car.

can someone tell me how to PM so I can submit my car.

Click the Icon of the person you want to PM and a new window will open, select message.

Really like the reviews, reminds me of Topgear with less challenges, and more (dream) car reviews.

I present for your review the PMC Goleuni (“Lightning” in Welsh).

If you don’t want to go down the entire history, PMC fell out of the consumer market in the early 50s because BTAG (Big Three Automotive Group) make shiny new cars faster. PMC then focused on commercial vehicles until the mid to late 80s when the company entered rally and road racing. Several street cars have resulted from the racing image.

The car sent is their all new GT circuit car. There is a road legal version, but for you I have sent the absolutely not road legal racing version sporting a 1500HP 6.0L V12. The road legal version makes 1000HP in “GT” trim, or a mere 640HP in the RWD “base” version. 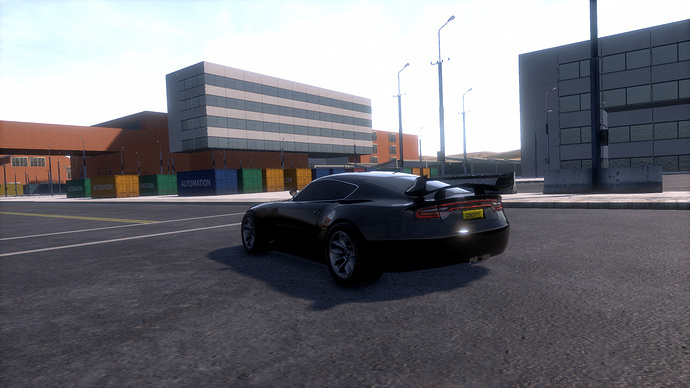 As a request in your review, I would like to see you drive the car one loop around the highway in “American Road.” The road basically follows the divided highway along the straight, across a mountain road (still highway), through a tunnel, and back to the straight. Best of luck to you. A fair warning, the car is capable of flight.

For the rest of the review this is a purpose built racing car and as such was never intended for normal driving, or indeed even to be sold to the general public (in this spec).

I have PMd a link to the ZIP file (can’t upload 22MB). The latest automation update kinda broke the car, and I havn’t fixed it yet.

Due to the positive responses and complete absence of any negative feedback so far, I am going to start transitioning this into a streamed series with edited versions coming out on a lag for those who miss the broadcast. Reasons:

Also, I have an idea; coordinate with authors so they can see their car live and this will result in ACTUAL SCHEDULED PREMIERE DATES! Yeah how does that sounds

As people have rightly recommended, I will be conducting tests of my setup tonight and tomorrow morning:

Will you still be recording/posting the reviews to view outside the stream?

and complete absence of any negative feedback so far

NEGATIVE FEEDBACK! I hate the idea. It’s all bad. terrible proposition… wait, what am I objecting to?

Yeah this is finally happening!

and on that front I just got some great news today! But more on that later.

So this coming Saturday I will be streaming the review Retro Age Motors Saint Vasia as a sort of personal celebration. Unfortunately the author @loflyh has informed me their schedule is non-cooperative.

That all being said for future refence on scheduling and such, I would like to know where my primary viewership will be coming from.

Simple question: What time zone are you in?

Also I am assuming most people have relatively normal schedules i.e. at work, school, etc somewhere in the 7:00 to 19:00 range. But I could be wrong?

Trying to get back into contributing stuff after I had a “Retreat From Life” episode for a minute or two. I’ll have to see what I’ve got to tweak and send in for review.

In regards to schedule:

I see a few more people have chimed in on the survey and those results will be added. But basics so far are that most people are in UTC -4 or UTC +2 / + 3 which makes a lot of sense. That correlates to east coasts of US and Canada and central Europe

. And between 2/3 and 3/4 of you are on relatively typical schedules.

As we can see from this graphic I put together, scheduling for between 0:00 and 2:00 UTC 0 (so between 20:00 and 22:00 for me) puts most people viewing during golden hours and a few of you perhaps a little past bedtime. Sorry to the Australia New Zealand folk though. Ironically, at the time this was compiled your were somewhat of a minority. Optimal time for everyone else means your work / school day is just getting started

Will update as appropriate but this was what was driving my decision for this week.

Working on the edited version of last week’s stream. Hope to have that up by Friday, this week.

Also because streamed, format is a bit different. We’ll see how this plays out.

One quick little pointer: I believe all (or almost all) automation engines get race intakes visually when exported to Beam. Just something I’ve noticed in your vids.

You are correct sir! Good catch. My apologies to anyone who may have suffered that criticism, in particular @loflyh

As we can see a performance intake actually gets rendered as a race intake in beam.

They’re rendered as their correct model in Automation, I’ve had quite a few poke out of engine bays before

As a way of saying thank you for the review and more importantly …to commend you for persisting with your project(s) despite or because of the hardships in your personal life.

I present to you Sir kmBlaine, the 2018 Vasia - kmBlaine Edition.
This vehicle is redone according to some of your suggestion and some of your (hardly disguised …hahaha!) disapprovals.

You Sir kmBlaine shall be the only person, other then myself to have this vehicle, please enjoy.

Saint - A division of Retro Age Motors
Enjoy the Experience