Automobiles Mont Royal was initially founded in Montreal in 1918 as a low-volume producer of luxury automobiles. The crash of 1929 and the subsequent Great Depression led to the company’s demise in 1932.

Following the Second World War, one of the company’s initial investors (and owner of two of their original cars) bought the remaining name and branding rights to relaunch the company in 1948. With initial success, Mont Royal’s finances dwindled with the push for more fuel efficient cars following the 1973 oil crisis until it was merged into the new Royal Canadian Motors in 1977. This would mark the second time the name died.

In 1997, with the increasing success of Japanese luxury marques, RCM relaunches the Mont Royal brand to increase the prestige of its luxury models by differentiating them from their mass market counterparts. This move was a success and Mont Royal once again became a prominent name in the luxury car market.

In 2017, Mont Royal replaced the CVU compact crossover with the RB-5 to follow its new naming scheme. Following current market trends, the RV-5 Sport is powered by RCM’s I4-M engine in a Mont Royal tuned 2.0L turbocharged configuration to produce a healthy 213 hp and 219 lb-ft of torque. This power is sent to all four wheels through a 7-speed automatic transmission.
The interior features seating for five with all the premium comfort and safety features the buyers in the segment have come to expect.
The RV-5 Sport retails for $40,725.

As an extensive facelift of the 2015 RS-1, the 2018 model also includes an updated range of engines. The 5.0L turbocharged V8 now produces 492 hp and 548 lb-ft of torque. The new RS-1 can reach 100 km/h in 5.3 seconds and an electronically limited top speed of 280 km/h.
The sumptuous luxury interior now features a heads up display with a design updated to better reflect the brand’s new styling direction heading into the 2020s.
Unchanged are the hydropneumatic suspension and 9-speed automatic transmission, both focused on absolute comfort. 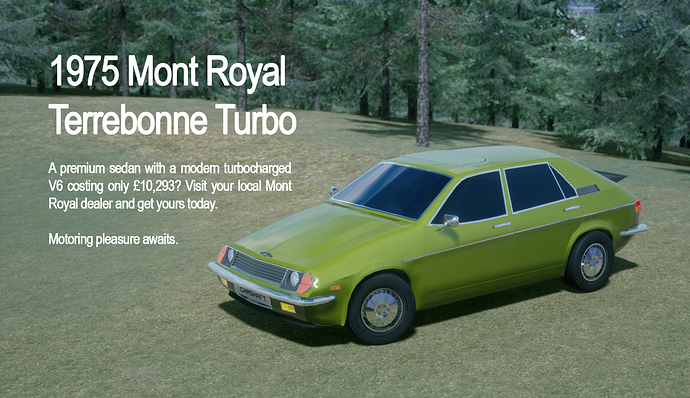 With its second generation introduced in 1974, for 1975 Mont Royal decided to push boundaries of the Terrebonne with the introduction of a turbocharged sport model. Starting with the same 2.9L V6 found in the other Terrebonne models, a twin-turbo configuration pushed the output to 180 hp and 216 lb-ft of torque. With the 4-speed manual,100 km/h could be reached in 7.1 seconds. Fuel economy suffered, dropping to 17 MPG. Even with the sporty engine, the FWD setup and hydropneumatic suspension meant the car was quick but certainly not sporty and so it never gained the popularity Mont Royal hoped it would.

Unfortunately for Mont Royal, the end was near and the poor sales of the Terrebonne Turbo meant it was cut in the 1977 RCM merger, while the Terrebonne model line was entirely replaced by a more conventional model in 1980. This was one of the last Mont Royal models introduced until the brand’s 1997 revival.

With the 1997 revival of Mont Royal as RCM’s luxury marque, new models were still being introduced as RCM’s premium models came up for replacement. 1999 saw the popular Regal replaced by the MV. WIth shifting market preferences, the new car was slightly downsized but packed full of technology like its predecessors.
The EP trim level was the upscale choice, powered by a 3.4L DOHC V6 producing 209 hp and 216 lb-ft of torque. While the power figures were not spectacular, the engine promised smooth power delivery, especially with the 5-speed electronically controlled automatic transmission. 0-100 took 8.5 seconds and top speed was electronically limited to 240 km/h.
What made the MV unique was its longitudinal FWD layout with hydropneumatic suspension, truly going back to its roots before the merger into RCM. The MV proved to be a good seller and helped bring the Mont Royal revival to success.

No wonder I’m starting to feel that it’s reminiscent of classic Citroens, and it definitely looks classy and period-accurate - it may have been introduced at the tail end of the 90s, but would not have been out of place in the 00s at all.

The 1999 Mont Royal MV EP the best design made of that 3D basic model. Very harmonic and elegant look, I wouldn’t change a thing on it.

Unveiled at the 1976 Salon de l’Automobile in Paris, the Mont Royal Future Luxury Concept was a hopeful look into the future of the brand amidst the economic issues it was facing due to the fuel crisis earlier in the decade and the increasing emissions regulations in the United States, one of the company’s main markets.

The Future Luxury Concept was powered by the 2.9L turbocharged V6 found in the Terrebonne, but placed in the transverse position. This was justified in order to maximise cabin space while also a look into the possible smaller turbocharged engines of the future for large cars.

In terms of passenger space, the transverse engine and liftback body shape provided more space than a typical full size sedan in something more akin to a midsize. With sliding rear doors and twin sunroofs, it was clear that this concept was not bound for production. The cabin was luxuriously appointed for four occupants, with sumptuous leather seats not unlike those in a high end living room, as well as the most advanced technology of the time. The dashboard featured a revolutionary digital display that was almost unheard of at the time.

While interest in the concept was quite high, Mont Royal declared bankruptcy before it could be developed further. There are rumous and a few grainy photographs of clay models that seems to suggest the company was working on pushing it to production for 1979, but any of the models are feared to have been destroyed.

The second generation of the CV compact luxury car was released for the 2004 model year and its angular styling based on the “Cutting Edge” philosophy stood out in the market. As that design philosophy also extended to the engineer side of things, the car made use of the newest technologies of the time. Mont Royal engineers employed a new aluminium semi-spaceframe chassis with aluminium panels to keep weight down while still being able to fill the cabin with the latest luxury features for the comfort of the occupants.

Bucking the trend, the performance-oriented MTD models were released at the same time as the rest of the CV range. The Mosport Technical Division, shortened to MTD, was the branch of Mosport that worked exclusively on Mont Royal cars to offer Mosport’s racing pedigree without losing the comfort and luxury that Mont Royal was known for.

The CV MTD made use of an alloy 5.4L DOHC V8 that produced 385 hp and 383 lb-ft of torque, not the least because of a high-tech direct injection system. Power was sent to the rear wheels through a 6-speed manual or 5-speed automatic transmission. The manual transmission allowed it to reach 100 km/h in 5.1 seconds and up to an electronically limited 270 km/h.

Holy wow, was NOT expecting that LMAO. I’ve seen this floating around and it looks great, I figured it was more of a CTS 3.2L than a CTS-V with the 6.0L nuke.

Not many real-life cars had this tech 15 years ago; the MkV Golf GTI was one of them.

Without the limiter it would be around 290 km/h, if not more.

Anyway, the best way to describe the CV MTD would be as a muscle car in an executive sedan suit.

The first generation Mont Royal RV-3 is due to be replaced in 2020 so to send off the popular midsize luxury crossover (as well as make it more competitive with newer models), Mont Royal packed the highest trim model with more features. These included a heads up display for the driver, replacing the middle rear seat with a console for the rear passengers designed to collapse and allow the seat to fold flat as usual, and some minor tweaks to the 3.5L V6 to now produce 290 hp and 262 lb-ft or torque.

The third generation Mont Royal Montcalm was introduced in 1958 and took Mont Royal luxury to the next level. The design was cutting-edge at the time, with fins and large intakes that took their inspiration from the burgeoning jet age. This Grand Luxe Phaéton example was the range-topping four-door convertible model. It is outfitted with the most luxurious hand-made interior of the range as well as the latest technological features of the year, such as power windows and seats, push-button transmission, and a 7" slot-fed record player under the dash.

Powering this behemoth of the road is an 8.5L V16, the first one bearing the Mont Royal name since the original company folded in 1932. This engine produced 366 net horsepower and 501 lb-ft of torque. This assured that the Montcalm Grand Luxe Phaéton could reach highway speeds faster than most cars of the era and reach speeds in excess of 130 mph.