Auxuras Motor Co - The most powerful Auxuras sedan, yet. Introducing the 2020 ETL Spec-V 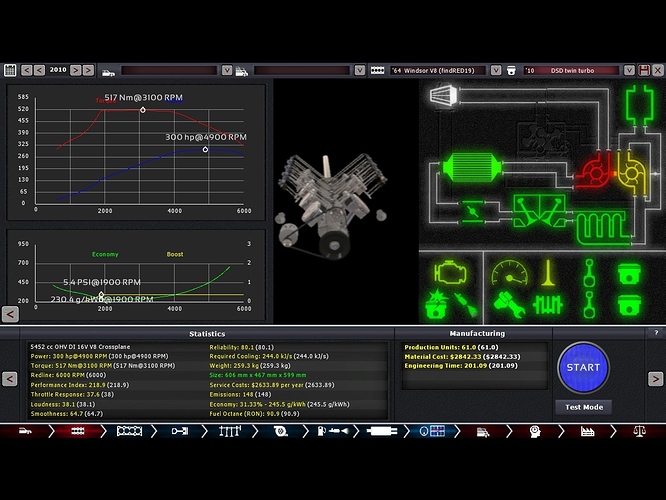 What kind of intergalactic electrospacewizard juice was your car running on?

how exactly do you manage to get such good mileage? Using turbo lag to your advantage, I’m guessing?

Fuel economy is also affected by gearing and aero efficiency, not only by the engine. Once I build a NA OHV V12 with +26% efficiency but the car ended up with something like 24-25 mpg because the gearing (it was an auto), weight (it was a luxury car) and I guess the body wasn’t aaerodynamic.

Turbolag is awful to fuel economy. Generally you want to match the more efficient point of the engine in the Rev band with the average rpm cruise in the fuel economy calculations tab, so isn’t that hard… However doing that while still maintaining high levels of performance is ssomething.

I have heard (and please do correct me if I am wrong) that turbochargers that are laggy are a benefit to fuel economy. When the engine is below peak boost and on low load, the flow of air is not great and accordingly the fuel-air ratio means that the fuel isn’t being consumed like mad. If the car is laggy and the peak boost is generated at higher RPMs, up there the air is really coming in because a lot of exhaust gas is being made and then to keep the fuel-ratio safe (I realize the fuel ratio changes between on and off boost) the fuel quantity being taken in must increase.

Not exactly. Since turbochargers are technically still active at low load they’re just there as power drainers. Hence why modern economy units are quick responsive ones.