Alrighty. The engineering has had it’s full update and some design tweaks.

I like this design! Although I think the front would look better with the lights angled like this: 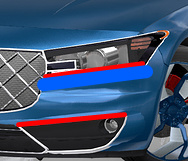 Thank you for the critique! I’ll try to see what I can do! I was though planning on redoing the lights anyways since the little “cut off” in the middle didn’t really fit to me.

We come to the thirteenth generation of the long running flagship sedan. With all new features and a completely refreshed design. The bold and sleek design of the LaFette makes for a perfect granny car. Sharing the same chassis as the Peregrine Helena the LaFette retains some sporty features while keeping a classy and economic feel. The large LED headlights leave for a bright path in the night and the large grills cool the engine as it runs. The LaFette comes with the all new state of the art Auto Parking System (MXP & MXST) and Blind Spot Warning System (with cameras showing your blind spot when Digital Gauges are applied).

The LaFette isn’t any slow car. With the newly updated MXST featuring a 5.0L Twin-Turbo V8 producing 670+ hurspurs and a 0-60 of 3.7 seconds. Granny will REALLY like the refreshed Launch Control system which helps get the LaFette get to it’s 3.6 second 0-60 time. The MXST will be limited production to 2500 models and will be available to private buyers August 2020.

Which company shall I cut out of the AAUC?

Traditional luxury is somewhat of a dying breed nowadays. Luxury car buyers are a younger generation nowadays, not looking for a vehicle to be chaffeured around in or the broughams of the 70s. Instead they want a somewhat sporty car that gives a good driving experience and performance while still being comfortable. That’s part of the success for brands like BMW.

Gremlin could redefine their brand, a bit like Cadillac did some years ago, to be a more youthful and sporty brand while still offering luxury and comfort. That would render the Peregrine brand a bit unnecessary, and maybe the entry level models could be replaced by offering “Peregrine” as a performance oriented trim level above the “S” models for the Blaire brand.

This is a very good idea. Although I was hoping to have Gremlin go for a more Lincoln approach. Seeing your approach has started to shape my mind, and seeing the death of the companies that inspired Peregrine (Pontiac & Corsica) and how that market is sort of dying out. Having Gremlin stay as a Cadillac copy would be a better option. Unless the poles say otherwise this will be on my mind for now.

Hello everyone, today the AAUC has announced that they will be discontinuing the Gremlin and AAM brands. Peregrine and Blaire will go on to be their only separate brands (threads), and Peregrine will be rewritten. This isn’t a long post. Just a simple change of events which I’ve been through a lot as I’m still deciding which direction to go through. Thank you all and have a good day.

The Guntra first started out as a standard compact family sedan & liftback from 1988-1992 and was a complete sales flop considering there was an oil glut + the early 90s recession. Blaire saw it as their entrance into more higher-end markets, but instead of using their flagships such as the Cahvack, LaFette, or Lynn as starters. They made an entirely new lineup consisting of the Guntra, Walaby, & Albatross SE. This would ultimately fail because their marketability to get a slightly more well-built compact sedan to a younger market failed completely on top with its modest fuel economy and later with the recession that came in the early 90s and cause Blaire to stop production of many models until the late 90s - early/mid-00s. The Guntra came standard with leather seats w/ a standard cassette player and seat belts. Later in 1989, 134 Guntra models were fitted with a driver’s side airbag which was a brand new feature at the time. The downside was that the cable to activate the airbag would typically delay causing the driver to slam into the steering wheel before the airbag expanded and broke a recorded 12 necks. Later in November 89, Blaire recalled the remaining driver’s side airbag Guntra’s and destroyed them as the lawsuits for the deaths and injuries of people caused by this problem were beginning to take a toll on the company. In 1989 a Group A rally version of the Guntra EFI was made and won only one race in its lifetime it came with a 1.7L Turbocharged I4 producing 175hp & 141lb-ft pushing it to a 0-60 time of 6.91s at a weight of 2368lbs.

The sixth-generation Rodman was a better re-badged version of the Guntra, but with 2-doors and a V6. It was shown at the 1989 New York Autoshow alongside the Guntra. Its sales did slightly better than the Guntra, but was still the least sold generation of the Rodman apart from 1999-2004. The sixth-generation Rodman was also marketed alongside the Guntra to younger generations, but by that point, the design and performance did not catch the eyes of young families or rich college kids, but in fact, caught the eyes of retired Americans looking to live in Southwestern Florida. When the Rodman came out in 1989 it too came with the driver’s side airbag, but the damage was much worse as they sold more Rodmans with airbags, in turn, causing a total of 24 combined injuries & deaths. A total of 24,598 Rodmans were recalled in 1991, and the Rodman was refitted with improved airbags that actually worked (but got a Poor rating in the IIHS moderate overlap test). The Rodman soon later got it’s seventh generation.

The third-gen Leo was unveiled at the 2005 Las Angeles Motor Show and was sold as the “American Taimania”, as it was a rebadged Keizai. It was also popular among first-time drivers and college kids looking for an affordable new car as it was advertised. It was sold in about 5 Southern American countries, Central America, Canada, & the United States. South America was the most popular market. In 2008 the Leo was offered a temporary prototype infotainment system. It was plagued with lag and collected dust, so only 25 2008 models were sold with the proto infotainment system.

The Leo shared the same exact internals as the Keizai with the 1.6L I4 and the 2.0L I5. The third-gen Leo ended up being the least sold generation of Leo (in terms of the North American market) and was later updated in 2010 with a complate restyle with a more functional infotainment system. Check the Taimania Motors website for more details.