Let me know if this sort of thing isn’t allowed, I’m not aware of anyone else who’s done a challenge of this sort, and I haven’t posted a challenge before in any case. 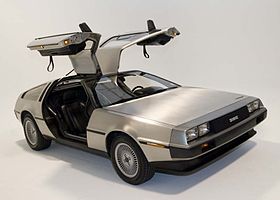 This is a campaign challenge. We’re here to see who can get the highest score with specific starting circumstances- if you can avoid going bankrupt at all. All you need to do is post a high score and attach your save file for proof. Campaign is changing fast, so include your version number too. It’s currently LC4.0, and later versions are valid, but I’ll keep track of high scores separately.

The Rules:
You must follow these starting difficulty settings:
Starting Year: 1975
Company Headquarters: Gasmea
Starting Money: $200M
Dealerships: None
Land & Factories: None
Starting Tech: Up to 12 points total, no more than 3 in each category

After you’ve started, you’re free to do basically anything except modify the save file externally. With your starting budget, it would make the most sense to target GT cars, like the real DMC, but you’re not required to. It SHOULD be impossible to afford steel presses, but if you can wizard your way into a Medium factory without going bankrupt, show me how. You can build your factory in any country. The biggest challenge will be not going bankrupt. If you sell any cars before going bankrupt, though, you’ll get a score that’s valid for submitting.

I’m not 100% sure it’s actually possible to do this, but I think it might be. I tried this (without the tech though) and went bankrupt right on schedule in '82. It seems history is hard to change. Can you do better?

Sorry dear chap(chappess??) but you are a heathen. My eyes light up whenever I see a DeLorean on the road, never mind a showroom and that’s not just the light shining off my cataracts!!

It’s up there with some of the best…not quite Mk1 RS2000…or a proper Land Rover Defender (not this monstrous imposter parading around with the Defender name on it)…or a DB5 but it is a thing of beauty.

I’d love to enter but my old brain hasn’t quite got there with the campaign yet. I was OK(ish) with V1 of the campaign but it’s got a bit complicated for me…a bit like playing Fortnite…I can shoot people but when it comes to building things I’m like a very big fish in a very small barrel… 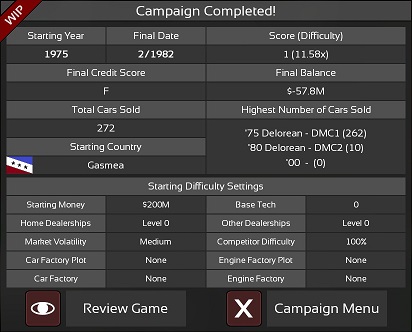 I think that quote was from John DeLorean himself, talking about the blandness of GM’s cars at the time. I’m a fan of DeLorean… both the car and the man. He also created the Pontiac GTO (which started the muscle car era). Very interesting challenge but I fear I’m in the same boat with Jaimz.

Oh yes, that quote is from the man himself. It’s probably fair to say that he DID make a car that lights up the eyes of those who see it. When I say he “failed” though, of course I mean he failed in doing that without going bankrupt, at least when he was running his own company. The automotive business is, after all, a business. Many people can make a wonderful car, but much less of them can make a wonderful car profitable.

The real dream to make a new specialty auto manufacturer is very difficult, hence the theme of this challenge. Even Ferrari, Lamborghini, and Lotus eventually ended up owned by other, larger auto companies. Certainly, even DeLorean failed at that, but his story is appealing because he got close, and I cant think of anybody who attained lasting success. It’s not like I can go to a dealership and find a new Vector or DeTomaso.

In real life, the DeLorean DMC-12 was infamous for being underpowered, so it might make sense that we could earn bonus point if the cars we sell somehow outperform the DeLorean in a straight line - the more performance the better.

gave it a spin, with F results

I’ve done slightly better. This time I made a Small 1 factory and kept engines on contract the whole time. My actual sales numbers stayed in line with a tiny factory though. Most frustratingly, my cars were never selling above the minimum margin I set, which was fine, but even when I priced them into the upper range of GT customers (58-60k) I never sold a single car to the GT segment or went above minimum awareness there. That was odd to me because I had tons of unsold cars and I seemingly had good competitiveness in that market segment. I only made a profit overall for a few short spurts and spent most of the time losing money either quickly or slowly.
Version: 4.0
Score: 54
Bankrupt: Yes, 1986

Car was a turbo V8, biggest change during its lifespan was switching to an advanced auto.

no sales at all with a turbo V8 and no familiarity could mean that your reputation was in the ground from reliability, just going on a hunch here.

managed to get to the end of a run, because despite the last fixes boxer 6 are still made of magic

I limited myself to the GT market, would have been easier to push one of these into premium, so the score is readily beatable. Went as far as getting a Medium plot in Arhana, but never had the cash to go into a medium factory, so every model has an Aluminum Space Frame chassis, which kind of kills sportiness late game but hey, nothing a fat turbo can’t fix.

Still better than going bankrupt though

How do I build a car without steel presses? Fiberglass is just as bad, and aluminum is worse.

So, not to try and deter anyone from taking the hard road, but I remember the devs saying that dollar amounts in the game weren’t subject to inflation, and were all figured in 2012 money. Also, I totally didn’t try it with $200M and end up with a score of 0. Honest [cough]. Anyway, when you plug $200M into an inflation calculator, it comes out to about $850M in 2012 money. So while $850M may be more accurate, it also seems a bit too easy. Maybe try it with $650M instead? Or maybe $600M?

went to wiki, yeah 200 automation millions are too much, I’ll see with 50, these are still generous (inflate to 230) but there’s no middle ground in the UI

also random trivia from the wiki page: the PRV v6 engine the delorean used that everyone critique, is the same engine base that alfa used in DTM to soundly beat the Audi&Mercedes ten year later.

Gave it a try with a tiny factory and sold about 20 cars before going out of business, got a score of 0, and the majority of the time even GT premium couldn’t afford my car at all. Not sure what I’d need to change to bring up the affordability enough without ruining competitiveness(even with it only at about 60 percent).

Unofficial Entry
I was running some controlled tests, to see if I could do this. I noticed some… loopholes … in the rule set. In taking advantage of said loopholes, I felt guilty. So, rather than officially entering, I’ll just show my results. Although it shows 2000’s Model 3 facelift as my best selling vehicle, it was really 1983’s Model 2 that saved the game. 2006’s Model 4 almost killed me though. I was not able to replace it, and decided to simply ride it out and hope it didn’t crash

How are Boxer 6 magic? I tried to make one, but not only does it not make my car any more desirable, it takes almost a full year longer to engineer.