(Car Design Competition) The light sports-car with style and performance (FINAL RESULTS ARE IN!)

Time is up so here are our participants:

The Plotka T by @ImKaeR. Comes with a rear mounted turbocharged Boxer 6 with exactly 2000cc’s, and 238hp. This entry took a close look at the company’s most direct competitor and decided it could do better.

The Raider Turbo by @NandR. Also with a rear mounted turbocharged engine with exactly 2000cc’s, only this one is an inline 5 capable of 233hp. Interestingly, the market analysis showed that the lights sports segment likes this car just as much as the track segment likes the Plotka T.

The Zephorus Kigore V6 by @Riley. As the name implies, this incredibly detailed car comes with a V6 engine, mid mounted transversely also with the max 2000cc’s allowed but only with an output of 152hp due to using a maybe dated 4 barrel instead of the more modern fuel injection systems. Early reports suggest that less power does not seem to make the market segments any happier, but maybe it will compensate with performance.

The BATS SPC2000 by @Jaimz decided to go on a different direction than the other contestants and choose a path more mixing the famous Winthorpe Pony’s and the Batmobile. It comes with a front mounted Inline 6 turbocharged engine with 1997cc’s producing 147hp. Early test driver feedback suggest this car to be really fun for drifting.

The Typhoon 140 by @DrPepper2002 is the odd one out of the challenge. It made some singular decisions, namely, it was the only one to use less than the allowed capacity for the challenge, use a Inline 4 engine and use mechanical fuel injection. The mid mounted inline 4 produces, as the name implies, 140hp.

Instead of assigning one grade to each entry separately, you have to order the whole list according to your judgment.

Market scores results
these account for 33% of the final score.

Congrats to @ImKaeR for winning the markets part of this challenge.

The experience gained from career mode finally pays off

The clear favourite and unanimously voted the best looking car of the challenge: Kigore V6!

the normalized scores table for aesthetics:

Our designated test driver @Count_Quackula and our own Mr.Winthorpe took all the cars to the track for appreciation and both arrived at similar conclusions. The Plotka T dominated the competition with style, drawing compliments from both drivers. At some distance came the Raider Turbo and then the Kigore V6 and BATS with similar performances. In last, but not by much came the 1400cc Typhoon.

Mr Winthorpe, with his limited driving skills, took the cars to the short circuit of the Automation Test Track while our test driver went to Hirochi(long). This portion of the challenge accounted for 41% of the final score.

Congrats to @ImKaeR for also winning the performance test drive part of the challenge!

Up until the aesthetics section, both the Plotka T and the Raider were close but the amazing performance of the turbocharged Boxer 6 made clear who would be the chosen design for the upcoming light sports car from Winthorpe motors. The amazing looks of the Kigore V6 were let down both by his market attractiveness and performance on the track, still a fun(though difficult) car to drive.

Congrats again to @ImKaeR for winning the challenge with Plotka T!
Congratulations also to @NandR for the 2nd placed Raider Turbo and to @Riley for the 3rd place Kigore V6.

Winthorpe Motors wishes to thank as well @DrPepper2002 and @Jaimz for the Typhoon and the BATS.

Here is the upcoming model from Winthorpe Motors:
THE WINTHORPE PLOTKA T 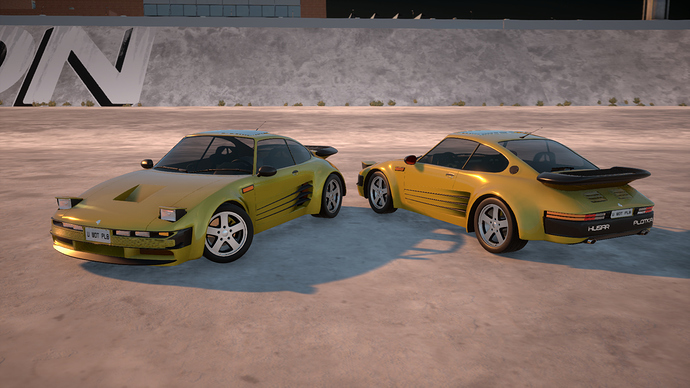 Damn, that was a nice competition. Thanks @pcmoreno for hosting this and I’m waiting for more rounds to praticipate.

donutsnail 2021-01-20 05:32:40 UTC #27
I had originally planned on entering this, but things came up and I was unable to complete it in time. Decided yesterday I wanted to finish it afterall. Like Riley's, this was origianlly conceived as a 1982 model, but changed to 1980 for the sake of the competition.

So, this is the 1980 Turból Cutela 2.0i SAV Turbo. Based on the basic 2.0i and tuned by performance engineering company SAV, the 2 liter, SOHC 10 valve inline 5 received a non-intercooled turbo among other modifications, bringing power to a very healthy 206 hp, sent through the 4 speed manual to the rear wheels. (Disregard the EFI sticker, forgot to take that off.)