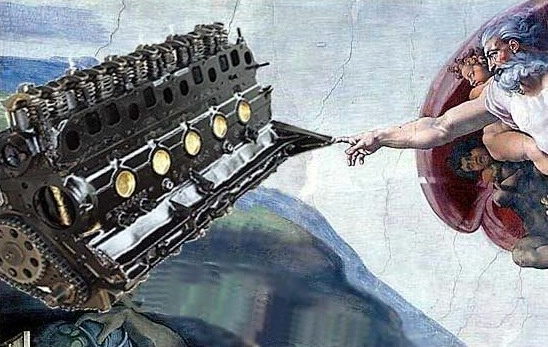 I’ve said it before, but the Jeep 4.0L engine is the toughest, least maintenance-demanding engine I have ever had personal experience with. Folks on the internet know that the Jeep 4.0L is durable, but they know little of its history.

The original Jeep 4.0L inline-six was hewn from a solid block of granite by lightning bolts. Its cylinders were bored by the Imperial Winds and its rotating assembly was balanced by the Scales of Justice. The Ancient Egyptians used Jeep 4.0L engines to move the blocks which built the Pyramids, only switching to slave labor when it was found to be cheaper than the olive oil used to fuel the engines. Scientists have ranked the Jeep 4.0L engine as one of the strongest forces of nature, racking right up there with tectonic plate shifts for its low-end torque, and being surpassed by hurricanes only for its comparatively low redline. Mechanics have found imprints of fossilized dinosaur bones in block castings, and serial numbers in Roman numerals are a common sight. The design of the 4.0L’s fuel injection system has been traced to the archives of Leonardo DaVinci, and early manuscripts of Shakespeare plays have been used as head gaskets for this engine (which, incidentally, explains the gaps in Shakespeare’s collected works as well as the 4.0L’s tendancy [sic] to leak oil). The engine’s ancient roots also explain its ability to run on some very non-conventional fuels (original translations of the Rosetta Stone include evidence of Jeep 4.0L engines running on ox blood) as well as lubrications (during the Middle Ages, Jeep 4.0L crankcases were often filled with barley, with no detrimental effect on power output). Historians maintain that the fall of the Roman Empire hinged on their inability to design a superior engine, and had the Titanic been powered by a 4.0L Jeep engine, 1912 might have been a much happier year. Yes, had early-20th-century naval engineers had a touch more foresight, the Jeep 4.0L may have saved mankind from ever having to endure Leonardo DiCaprio and Celene [sic] Dion in the same sitting.

The only weakness in this otherwise unstoppable force of nature? Emissions. Yes, the engine’s design may have come from the hand of Zeus, and its exhaust note at full throttle may have reverberated along the rock formations of Arizona to forge the Grand Canyon, but by the year 2007 its crude emissions control (originally consisting of papyrus strips soaked in the tears of the young Tutankhaman [sic]) had become outmoded, and the legendary, nay Biblical force of the Jeep 4.0L was put to rest.

Sorry for the gap in post, this was saved to my home computer.

The Joop was a straight six however… Probably not well suited for FWD.

I love it! It’s comfy, I think it looks great in and out, it’s powerful, practical as hell, great in most weather and it’s built like crap! I will happily admit that. Great car to pick up cheap and fix small mechanical things like brakes and suspension to drive until it dies. We’ve put less than $5,000 into our 87,000 mile example and have owned it for two years. Starts every time. It was also way ahead of its time, and I’m on a Tyrade again. Sorry.

OT So I don’t get in trouble: Kinda sad I didn’t enter this round, so many great entries. Excited to see how they stack up.

It was an evolution of the ancient AMC straight 6 in use since the 60s, hence pushrod and reverse-flow… reliable and well liked engine though.

So, you’ve never heard of the Aussie Ford XD-E-F?

Nope. Don’t hear that much of Australian cars.

Is that also reverse flow?

IMO , reverse flow heads are good if you want a compact head and engine but other than that
CrossFlow is Far Superior… and pushrods… ooof

After yet another beer, Dan sits down for his last section of the Slipstream magazine.

This thing… just looks… so… bored. I mean, look it’! Did the designers only have rulers on hand? On top of that, the twin grilles are makin’ this thin’ look like a pig. So not only is it bored, it’s a pig. A bored pig. Not for me.

Dan throws the Armor’s brochure out.

Hooooly sheet. I can see the wheels on this thin’ from Kansas! And they’re all orange n’ shit too! This thin’s large and in charge, just like my nickname in high school. I really wish the wheels weren’t so obnoxious, but everythin else ‘bout ‘er is grabbin’ my attention, Large black luxury coupe, good amount of power. I’ll ‘have to see if I can get a less obnoxious set of wheels at a dealer.

Fairly’ vanilla lookin’ thing. The taillight is interestin’ but nothin standin’ out too much. I dunno why it’s slower than similarly powered cars. 130 horses seems plenty but 0-60 in 10 seconds is peanuts compared to its competition. Throw in the fact that it’s got cab forward FWD when many of the similar coupes I’ve seen are RWD for cheaper, and I just ain’t seein this one.

Dan throws the Storm’s brochure out.

This car looks like the nerdy kid from high school. The one who always insisted Darwin was onto sometin… god, what an idiot. Anyways, what we’ve got here would certainly make anybody question their beliefs. It’s a 3.3L V8? The hell? And it’s mounted sideways like it’s a 4 banger, but it’s got a Limited slip diff’ like it’s serious about performance. Yeah, alright. Maybe this thin’ should sort out its identity crisis before I look at it again.

Dan throws the Garrote’s brochure out.

I’m likin the looks of this one. It’s big, got luxury, surprisingly quick, and stylish. Diggin those cheese grader wheels. Rubbin right up against my price cap, but it seems to be worth it.

This car is the AAAAAAAHHHHHHH! Dynasty Superior. Seriously, why’s it gotta have so many As? It’s a big luxury car like plenty here, but it’s got a 4.3L V8 that makes… just as much power as most of the 6s here. That’s what I mean when I say they don’t make em like they used to… Either way, for being 26,600 this car can’t match the power of its high tech competition. So it’s regulated to the past.

Dan throws the Dynasty’s brochure out.

Gaaad Fukkkiiiin daaaamit, another wagon! Wagons are fer old folks! And this one’s in cheddar cheese yellow! Like a taxi! Turbo too? Must be one of them europoland folks thinkin they know what Americans want! Not today, commies!

Dan throws the Dione’s brochure out.

Another cheese colored coupe. Not a lot of style with just the popup lights makin it look like a plain slice of cheddar, and what’s the point of a coupe if it ain’t appealin’ to me stylewise? I can’t see much.

Dan throws the Kobe’s brochure out.

This interesting lookin sedan thing has a 2.6L 6 cyllinder powerin the front wheels. It looks like one of them Sedans the Europeans make into racin’ cars… tourering cars I think they call em. Expensive but interestin. I’ll give it a shot.

Alright now this is just cool. Yeaaah. All the ladies gonna be wantin to ride in this one. I’ma need to regrow my mullet if I’m thinkin about getting this one. All style.

This thing looks pretty strange I ain’t gonna lie. It’s yellow, and got black painted bits like a bumblebee or sometin. It’s also a pretty damn huge car with an engine that doesn’t have the guts to back it up. A little 4 banger is fine on a small car, not a big ol’ thing like this.

Dan throws out the Osprey’s brochure.

I’m findin’ this car’s worst angle to be the front. The rest looks pretty dang neat but the front… it’s like my mom always said to me. “Dan, you’ve got a face for the closet.” There’s just… way too much goin on mechanically with this thin too. AWD, turbo, 5 cyllinder? What, did somebody forget the 6th one? Just too much tech for me that I can’t be handlin.

Dan throws the Kadett’s brochure out.

Talk ‘bouta trip to snoozeville after all those experimental sporty coupey things. It’s BROWN. It ain’t got a cassette player… I assume because nobody who buys this car could understand one… I Just gettin’ the feelin’ this car wants to sit me down and talk ‘bout the war for way too long. Way too borin for me.

Dan throws the Zimmer’s brochure out.

Alright now this thin’ is straight outa the jetsons. Look at it! When do I engage the flight button? Sadly I’m thinkin all the budget for this car went to the design. The 2.2L Turbo V6 makes the same amount of power as a fair few 4 bangers here. So it’s needless techy. Plus it cuts off power at redline, meaning there’s literally no way to access that power anyways. Shame, it’s a really neat lookin thin’, but got so many issues. Like my ex wife.

Dan throws out the Satsumi’s brochure.

Alright, how in the flying fuck am I supposed to pronounce that gaddam name? Se… she… sesh… Fuck it, I ain’t even gonna bother. This is a car my mom would buy. It’s brown, and boring. It ain’t even got a cassette player, and it’s got no power. I ain’t buyin for my mom.

Dan throws out the Shitshedo’s brochure.

This thin’ looks like one of them star wars soldier things! Yeah… Just like a muscle car brought into the future. I’m likin it. Got good power, all the modern goodies, It’s a little expensive compared to the competition, but I’d like to see how it stacks up.

Binned for over ET on engine

Binned for late submission. (Even if it is by just a few minutes, sorry. Rules are rules.)

If I missed your entry. PM Me immediately. Otherwise we move on to the finals and Dan visits some dealers.

@DoctorNarfy Not sure if it’d still be accepted if it didn’t happen, but it looks like my body morphs reset.

Sadly I’m thinkin all the budget for this car went to the design.

Gonna have to collab with an engineer on the next comp

I’ll ‘have to see if I can get a less obnoxious set of wheels at a dealer.

They’re inspired by the wheels on the Group C Prototype race car, which are, yes, very obnoxious and shiny orange haha
Dan could opt to have the standard wheels if he wished. The one in the add just needed to be top of the line

Happend to me too so i guess its fine

Can be deleted as it’s better via pm

The 130 hp = 10 seconds to 60 is due to gearing, I doubt the other coupes on that body got 22mpg. It’s more realistic, since even most muscle cars struggled to do 9 seconds to sixty, but it’s an understandable priority on his part.

I guess my car ended up being too modern for gramps. I was trying to make something sleeper-like, like a Taurus SHO, but it ended up just looking boring design wise.