1.5L V6? I know the aim was something quirky… but that’s a bit too quirky!

When the IP Boulevard Star was introduced in 1983, it was a quite interesting concept. The boxy little MPV rode on a wheelbase of only 250 cm and it was only a little over 430 cm long. Yet, the upright shape made it surprisingly roomy for its size, the very flexible interior where seats cold be folded and removed in many different combinations was practical, and the rear sliding door combined with the lack of a B-pillar made the side opening enormous with the doors wide open. A while later an AWD version joined the lineup. With open differentials and an AWD system biased very much towards the front, this really wasn’t a vehicle to go off roading in, rather one built for safe trips even on bad roads.

And one like this is what you’re looking at here. MY 1988, one of the last Mk1 Boulevard stars produced. Actually, the last one sold to a private customer in the US. There was numerous special editions of the Boulevard star, but at the end of the model run, IP of America imported a special batch of 50 2wd and 50 AWD models. All of them wore a numbered plaque on the dashboard, and this is AWD #49 out of 50, with #50 kept by IP of America themselves. The AWD model of the final edition featured goodies like 2-tone metallic paint, whitespoke wheels, power steering, ABS, premium sound, electric mirrors, electric windows, a plush velour upholstery, an interior with four swiveling captains chairs, air conditioning with a small fridge between the rear seats, tinted glass, rear mounted spare tyre and a raised roof, all of them normally very costly options.

It was babied by its first owner the first 25 years of its life, only used for fishing trips a couple of times every year in the summer. Second owner had it until recently, a collector of anything strange 80s and 90s automobile related. I got this one as part of the trade for a Silver-York Accolade Zacspeed convertible, but since I have no use for it, I want it to come to a good home rather than just rotting in my backyard, too nice and rare example for that. Most Mk1 Boulevard Stars are gone now, being too utilitarian for their own best, they often had to suffer a hard life.

Pretty sure I came last, the last time I did a challenge like this… but I’m here, so here is my entry.

In a world where appealing to the widest demographic is slowly consuming originality, it is refreshing to see a truly strange thing amongst the beige. However, the Antares proves that “strange” isn’t strong enough of a word to describe things that have… an unhealthy reliance on gimmicks to mask its shortcomings.

… is a turn of phrase one would reasonably be expected to retort with when being asked why they are attempting to cook rice in a kettle, in a poor attempt to mask your stupidity with curiosity. Overuse of said phrase means it starts to lose its bite; likely after maybe two quips in the space of an hour. To keep it brief (and on topic), an overview of the Antares gives you plenty of time to make “Why not?” lose its meaning.

The pop-up headlights can be locked up or down individually with a key, and in any orientation. “Why not?”

The car can be unlocked from either side with the same key. “Why not?”

You can open the engine bay by either opening it with a key or by entering “O P E N” in Morse, with dots being played on the left rear faux-vent and dashes on the right- Actually, that’s pretty friggin’ cool.

I (David) bought this car as new in 1998. To describe my purchase of this… thing, the two words “nouveau riche” should explain everything to you clearly. Although my sudden acquisition of wealth did mean that I had a fairly sizable pool of vehicles to choose from, I must admit that buying this car… in 1998… for $34,800… Let’s just say that it was quite a bit to pay for a car that doesn’t really do any one thing perfectly. It’s not particularly pretty, practical or peppy, but strangely it stands out (to me at least) amongst theoretically “flashier” modes of transport. Perhaps being drunk with new money (and being drunk in general) is what the people I bought it from expect buyers to be like.

Name a price, and odds are on that you’ll drive away in this thing. I have no idea why yo- I mean I would buy something like this, but owning this Antares kind of felt like I wasn’t the same species as my fellow road-dwellers.

yo, what happened to the tailights why is it empty?

1.5L V6? I know the aim was something quirky… but that’s a bit too quirky!

In answer to your question…almost…it’s a turbocharged 1.5L V6.

It’s an engine designed for a specific purpose, which is, to power that car. Nothing to do with quirky.

The car has been in my game for months because it was created for Beam, where it excels when you get to sequential transmission (because I can’t drive manuals in games…too old and no feel or feedback on an Xbox controller!!).

I can’t imagine an engineering reason to go for such a design. And I’m someone who searched a lot for advantages of various V6s in the game.

1.8 V6s existed under MAZDA bonnet for a small MX-3 coupé!

Who knew you wanted an off road capable, turbocharged, luxury convertible, until now?

Mazda is not the best reference point for reasonable engineering

(I know that car and I want it, exactly for that nonsense engine)

Why bother owning those boring luxury convertibles when you can own this fun, small and lightweight kei car, Atera Molecule CXi.

Powered by turbocharged 660cc inline 4, producing up to 55hp and 79nm of torque and powering the front wheels only. The engine is incredibly quiet and has smooth powerband that is perfect for city driving as it’s intended.

Climbing inside featuring a snuzzy and comfortable (by small car standard) interior. The front row can seat 2 fully adults and the rear row can seats 3 gnomes. Thanks to [insert generic radio manufacturer here], it got that standard casette player, no need to have those fancy luxury CD stuff.

It maybe slow for other cars or in lucky case, tailgating you at around 30mph, whenever you look at the rear view mirror, you will see this happy face that will melt your heart.

If I broke the rules by not saying much about this car, please accept my sincerest apologies.

Hey my name’s Jake Barrington, Due to reasons of the parental nature, I am having to sell my baby (No not the one in my wifes belly, the car). It’s a '96 LLA Mynx, more specifically the TS or TrackSport. Mine is a stock example with 50,000 miles on the clock and the 2.2L inline 5. The TrackSport models like mine came with a bigger Turbo, 18" alloys, sports seats and steering wheel, better cooling including brake cooling vents and the water to air intercooling system (I know not in the UE4 version of the game, a feature that if was available the car would actually have). I’ve left mine stock although it’s quite common to see people put the larger 2.5L i5 offered from 2000 in the gen 2 Mynx.

The story behind the Mynx is actually quite a good one. You see in the late 80’s and the early 90’s the British sports car industry was slowly being taken over by more practical hot hatches or more reliable Japanese sports cars, ex the MX5’s and MR2’s of the era. Therefore LLA, one of the few British brands not owned by Leyland or Ford decided they’d put their sports division to work, to create a more fun competitor to the MR2. They started by hiring a few Ex-Audi engineers to develop a light, yet powerful 2.2L inline 5. These were turbocharged from the get go to reduce the need for a larger engine. The base models were limited to 200 Bhp to make a tame car, whilst the TrackSport came with 250 Bhp, although larger rear tyres meant the car didn’t lose itself like the MR2 Turbo’s did, the first major benefit of the Mynx. LLA also opted for a larger engine bay to make the mid-shift engine have plenty of space to work on. Finally LLA wanted to use their best gearbox, the Bampton RR 5 speed, although from '96 onwards these were upgraded to 6 speeds, although all Mynx’s came with LSD’s stock.

All in all the Mynx is an amazing sports car with a unique soundtrack, amazing handling and for something made in Britain, actually decent reliability. Mine could do with a good tune-up and the dampners are on their way out, but the engine is still strong. I did have to replace the turbo since the previous owner ran the car with no filter and the compressor was destroyed.

Something came up on the world’s most trusted and reputable sales website, gregslist.com…

A 1985 CZA Polje? Must be some obscure communist car of some kind 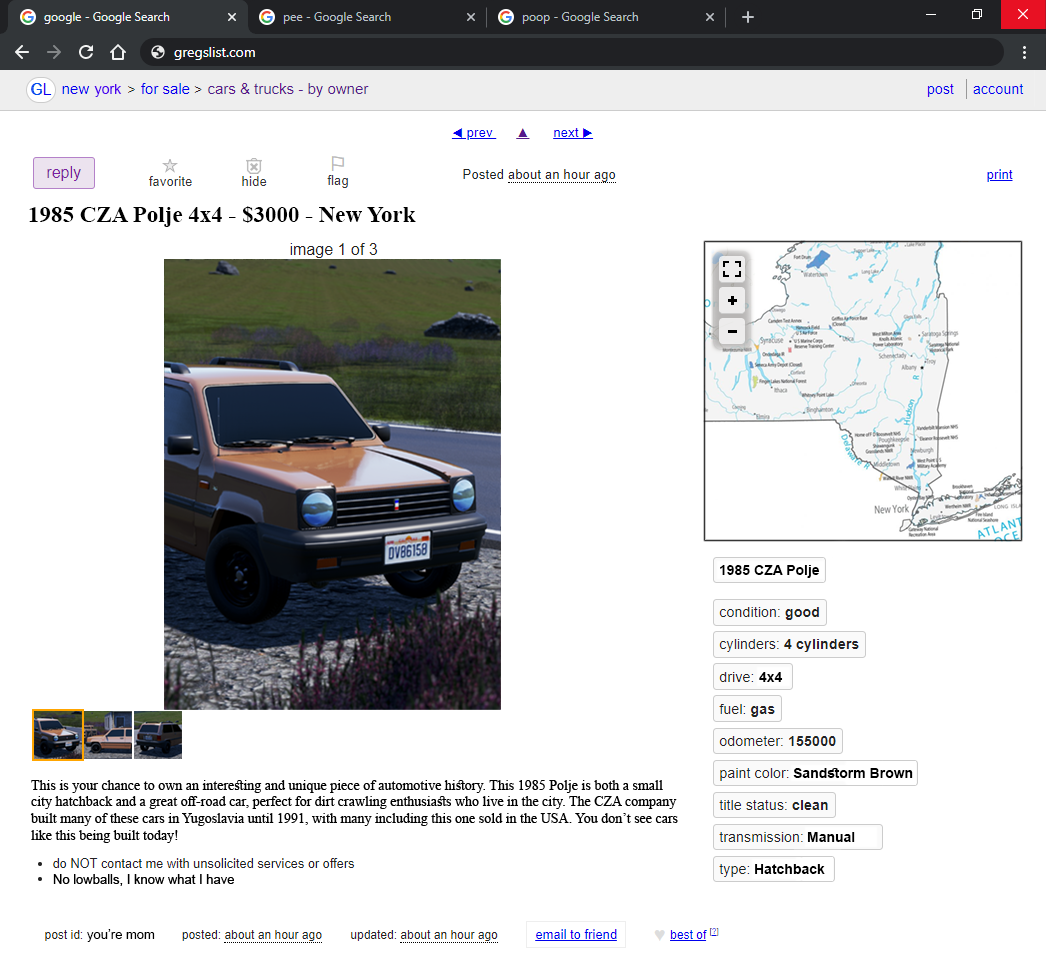 Apparently these things came out of Yugoslavia, and were essentially small hatchbacks that were lifted and given a 4x4 drivetrain… This one in particular seems to be a 2-seater, and a well optioned one (well at least in communist standards) with a decent 8-track system, sunroof and roof racks. It also appears to be well equipped for off roading, judging by its 5-speed manual transmission with a very low crawler gear and its locking front and rear differentials! Might be worth taking a look?