I tried to make something akin to the example cars, but I am seeing a lot of V12 wall paper cars. Probably getting binned for not costing 100K 1980s dollars, but screw it this feels accurate to the scenario.

Technical question. Since China (and I am assuming your car is Chinese) banned all imports in 1985 to bolster domestic car production (by force), is the Heilong 427 co-engineered with VW, Citroen, Hyundai, Daimler-Chrysler, or Peugeot? I’m getting a Mercedes vibe from the design, so Daimler?

I only ask primarily out of academic curiosity, but is the car is a joint venture a hyphenated name would add excessive length to the title as you asked.

YOTATAADFAZER.jpg1920x1080 520 KB
If you decide to come inside, you wont be disappointing by our luxury interior, and the second you put your foot down on the accelerator and hear the 4.3l Twin Turbo V8 roar, you won’t be satisfyed by anything else.

Introducing the 3rd generation Washington Canyon. Now available with a 3.8L V6 engine and a 5.7 Liter V8 engine (V8 model shown in the picture.)
The car is equipped with modern accessories such as a Multiport injection system, an advanced catalytic converter, Cassette player and 4- Speed Automatic gearbox or 5 Speed manual transmission (Automatic model shown in the Picture.)

(btw this is made with the stable release)

As the brand is very Hongqi-inspired, it would be assumed to be co-engineered with Chrysler if historical accuracy was adhered to. If not, it kind of just exists in some alternate Chinese Automation realm.

It almost looks like a Chrysler Laser, except a four door model. Unfortunately that distinction makes it look a lot like a K-car. The Laser shipped with a 93HP L4 (standard), and the K-car was a K-car (the car that saved Chrysler, and made Red Greens incidentally).

Amalgamating the name (and using the “Chinese mystery pistols” series from “Forgotten Weapons” [excellent series BTW]) you could expand the engrish name out to something god awful like:
1989 Honghu of the Peoples Chrysler type 88888888 Heilong Peoples model K 427 type 4476.

I find early Chinese communism interesting, I see a lot of “borrowing” ideas from other cultures after the “Great leap forward” and the late 80’s are especially interesting since the USSR fell in 1991, and the lead up made China the last bastion of Communism, and they had to sort it out in a hurry.

Or like you said, we are on a totally different timeline, and none of that happened.

Meet the Kingbird, the latest in our long line of personal luxury coupes. Built to take on the best that the rest of the world can offer today, it is equally suited to cruising down Sunset Boulevard and tackling the Stelvio Pass.

What are you waiting for? At just $20,000, take the Kingbird for a test drive today and feel the difference! 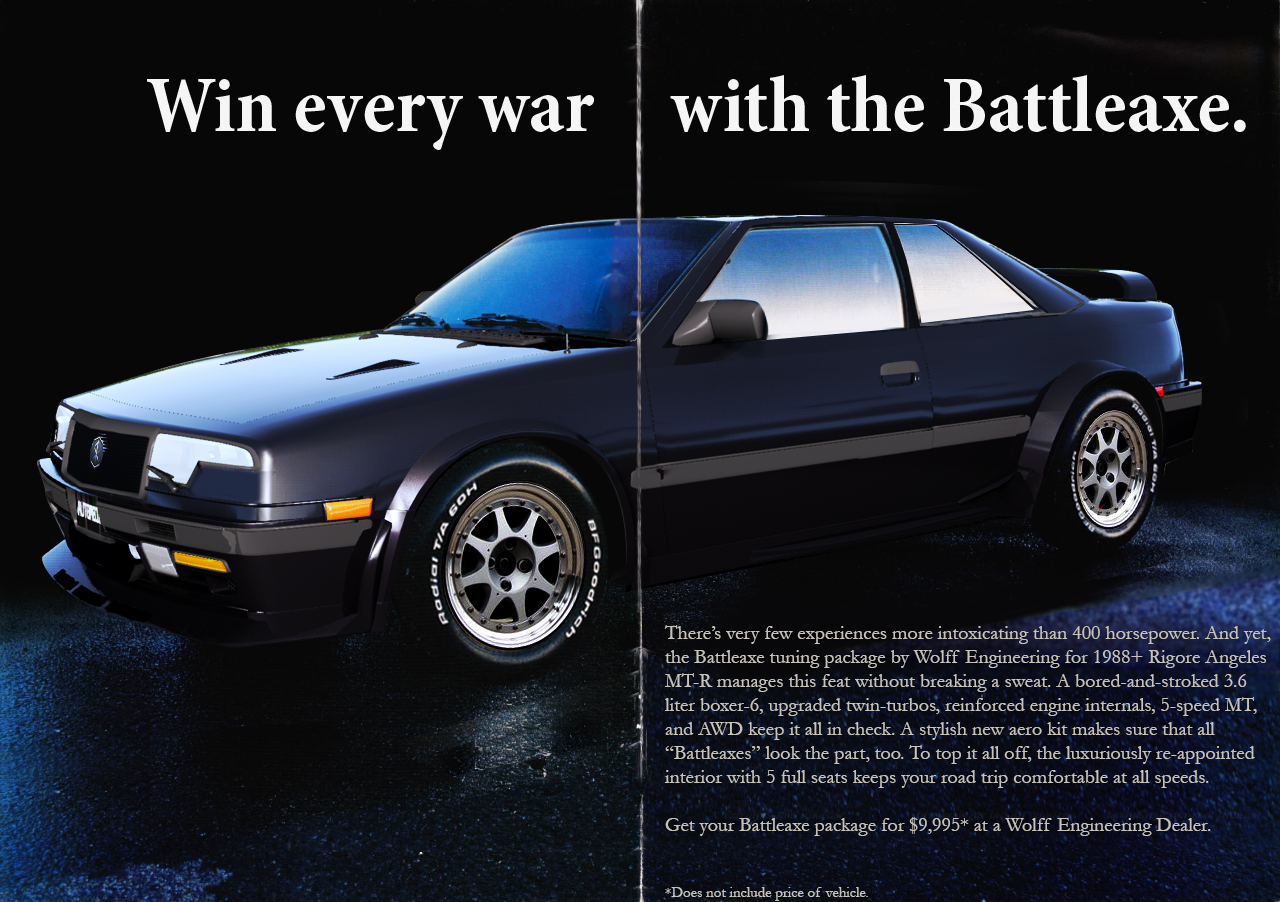 I changed my car to AWD and manual (and I am a traitor to the P71 Crown Vics that I had in mind for the CMT L-Class) as most competitors are going to be really fast…
It has now been submitted.

Finally someone has the balls to submit an SUV. Considering that such cars are technically allowed, I’m surprised it took us this long for one to appear on the entry list.

As for my entry, I thought about adding AWD, a turbo kit, or both, but I couldn’t stomach the reliability and drivability penalty from the latter, or the former’s extra weight, so I stuck with NA and RWD. I also stuck with a manual gearbox because his previous car had one, and besides, shifting gears manually during a car chase just feels cooler in my opinion, while also providing some extra reliability. But I will most definitely not regret making an ad which references six different contemporary racing games (four for arcades, plus two for home computers) - because I felt like doing so!

One thing that irked me at first was that the engine ET limit of 110 rendered an alloy block (and heads) virtually off-limits - but I quickly realized that I could just accept the weight penalty of an iron block and heads. Besides, even if the ET limit were generous enough to allow for all-alloy engines, an all-iron one with the same layout would still be more reliable, all other things being equal.

I do very much like the Efijy, so I’m glad to hear that.

Have to admit the car was actually inspired more by the 1989 Rolls Corniche or something similarly classical looking. I did consider the more modern, rectangular Rolls body, but the engine and tires I considered appropriate for the brief (read: wanted) didn’t fit in it.