I think this is a very stable car. This is generally a suitable body for a car, and it always has good weight distribution and braking, and this is the key to success. Congrat!

Also I have a question.
Isn’t trim year the first year a specified trim is first produced, not the year it is produced? This is just like model year.
So every time you change trim year, you make a new trim, thus the car is different. This would mean 1 new trim every year, which is unrealistic.
Thus, I believe the competition should change from requiring a 2012 trim year to simply having a model and trim year(s) that allow it to be sold new at 2012.
Because 2012 doesn’t seem to mean produced in 2012. It seems to mean first engineered and produced in 2012 (which means it can cover cars produced in 2012 and later). Thus irl, a 2012 car is produced in 2012, but cars like it were first produced, in let’s say 2009.
Which leads me to believe that automation should take production year that is separate from introduction year into account. Thus, it can be changed without changing specs.

i remake the old one because why not

With the help of Atera Automotives, they helped tuning the suspension and the ride quality of the car to make sure the passengers and the drivers are being comfortable yet smooth ride.

Safe ride quality ensures you in this car but the car also feature advanced safety and ESC to ensure that you and your family confidently feeling safe in this car.

With "small’ price of $61,200 with free service at any local Steurmann dealership for 2 years, go buy the car now! i dunno what to say anymore.

Because this is a good way to bring back an old company from 2019. (Do plan on bringing Donut’s Design Dump back soon)

The 2012 ESB Stinger Gran Coup is a premium sport sedan sitting on the same platform as the Stronghold. Featuring a Turbocharged Inline 6 pushing 308hp. The Stinger features a comfortable yet sporty ride.

edit: this was just a teaser

Okay since people are submitting anyways, here’s the deal.

You must submit on open beta. Good luck! :))

The 390 Horsepower Shromet Levine Sport. With Room for 7, and 0-60 in 6.3 Seconds. It’s the ultimate family adventure vehicle.

I guess someone is pretty good at predicting the future.

It’s a Luxurious one. It’s also kind of practical, Maybe you could even call it “Efficient”
It isn’t really sporty, Hell, It’s even kind of slow. Ranked about a 22 in sportiness by the Camshaft magazine. that’s bad.
It’s got a 4 liter V8 under the hood, Like one that you’d see on a ferrari! Except it only makes about 300 horsepower. Or was it 330? I forgot to bring the performance chart.
I do have this notebook here-

Alright, According to this, The car makes a nice… 27 mpg?? That’s not great. Like you’d have to have Grand tourer levels of performance for that efficience to be expected.
It does look nice, Doesn’t it? It’s about 54300 dollars to buy. You can go buy much nicer cars at around the same price. Please don’t waste your paychecks on this.
If you do buy it though… Cool. You’ve bought a soon to be a rare car (Because nobody is gonna buy them) 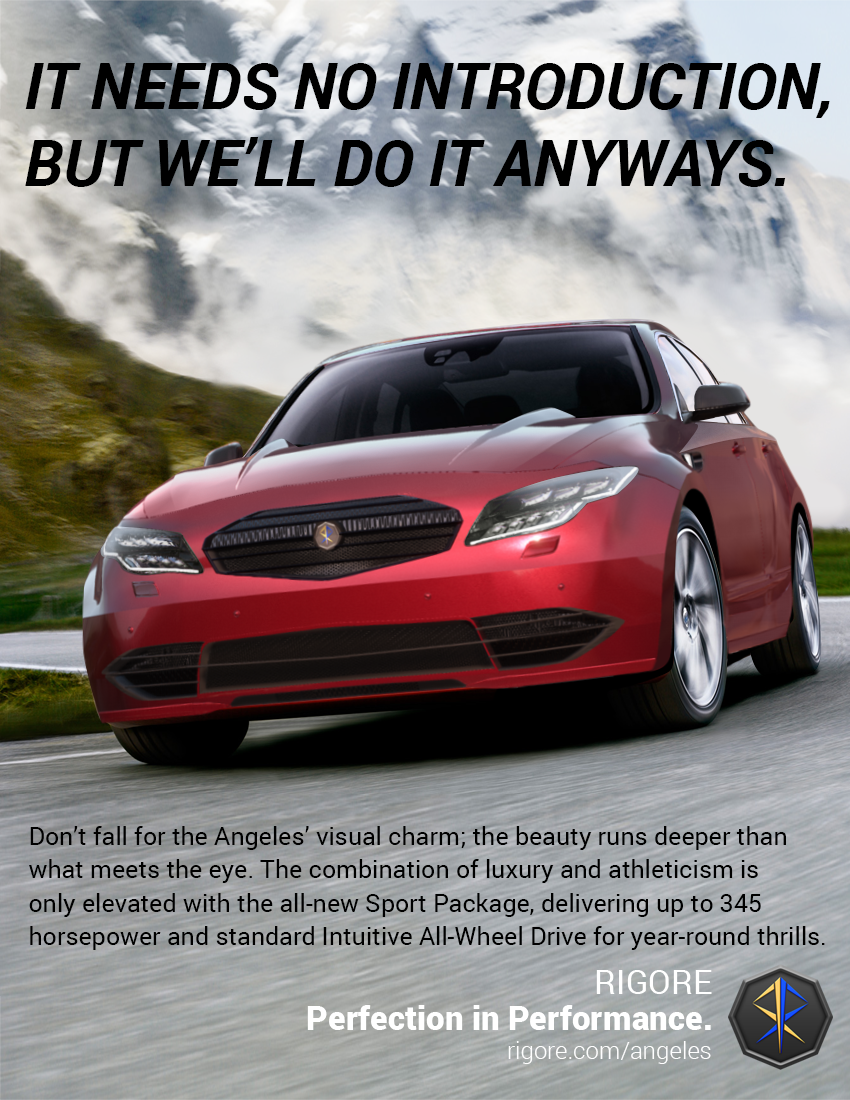 Rigore unveiled the 7th-generation Angeles in 2009 at the Los Angeles Auto Show. A facelifted model was revealed for the 2012 model year, and with it a new Sports Package with extensive updates; a more powerful 345 horsepower engine, sportier suspension, and exclusive bodywork filled the gap between the regular Angeles and the high-brow MT-R variant. 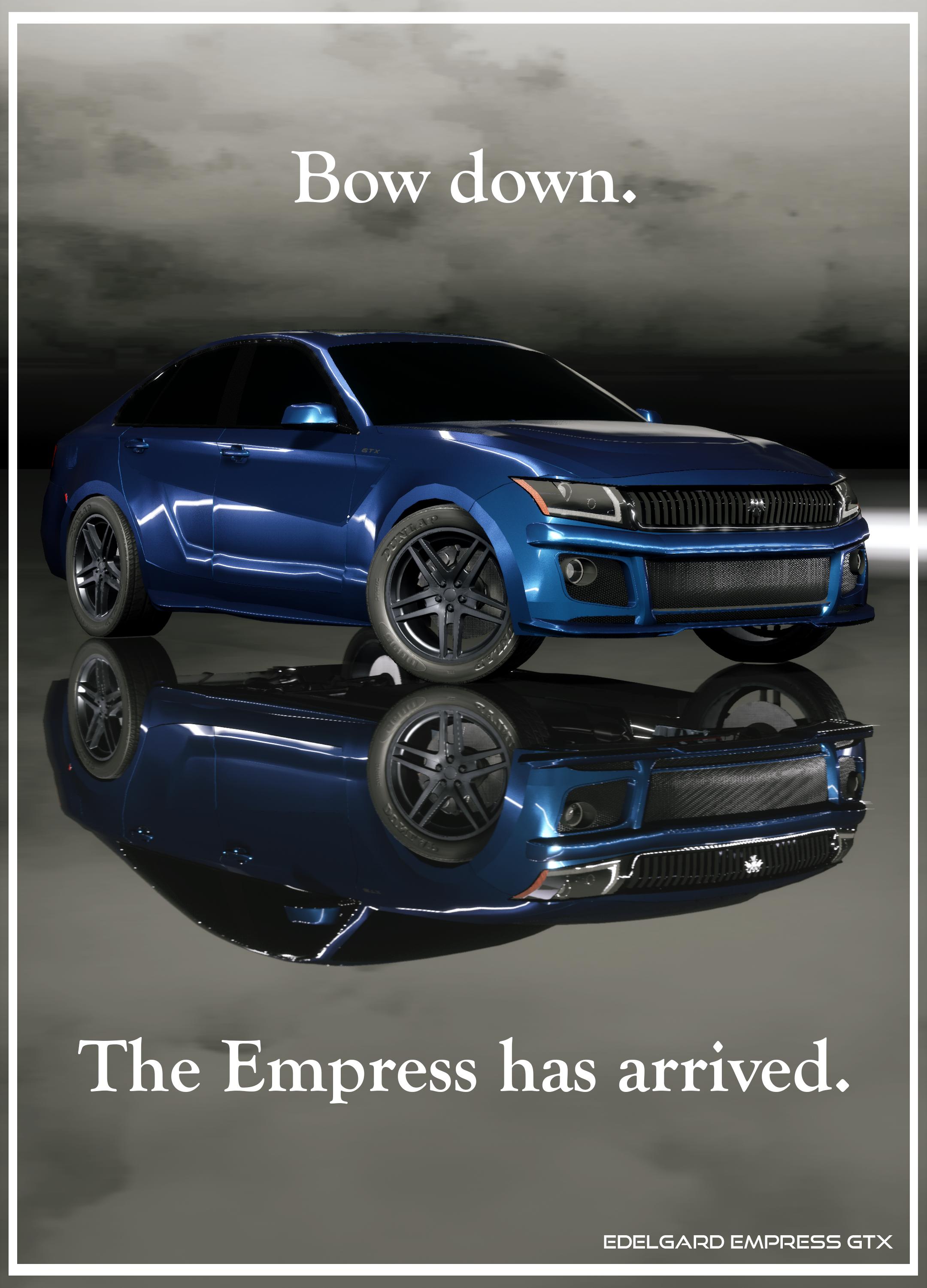 this deserves to win this CSR, it’s so polite

Not going to lie, there are some excellent ads here. They would make my english project envious…
Anyways a new entry will come very soon…

Kaizen Corp. also hosted an online competition that challenged fans to create an all new bodykit that would be made optional on all SC series sedans. The winner, whose design is shown here, is CB Gizmo, known online as v.424, which is why we have named this bodykit option v.424. Compared to the standard styling, the bodykit comes with a new extended from bumper with new vents, reflectors, and foglights, a revised grill, body sculpting on the side, and redesigned rear lights.

HiResPhoto55.jpg3840x2160 1.44 MB
(This is an ad for a version without the bodykit, irl it was actually made for an english project on rhetoric. The car itself is actually a modified version of the english project car, as styling is also rhetoric.)

Finally got an ad in

Enjoy! I think it turned out really well. Oh, btw…it’s supposed to look like a knuckle/fist flying through the air, it basically punches the air around it in a show of raw power, effortless speed, and sheer performance. Basically, it’s made to beat up other cars…