Recently I tried to post a lore post for one of the challenges, which looked just like I wanted it in the preview. And after posting the reply somehow I had two issues:

I tried a few things, like changing markdown commands to HTML commands and vice versa. On all occasions the preview worked fine, and the post turned out to have those issues. To get an idea of what I wanted to post, here is the complete post with HTML commands (press run to see the visual post, similar to the post preview here): https://www.w3schools.com/code/tryit.asp?filename=GKTIR0BMED6J

Does anyone know what goes wrong/what I did wrong? And how I can change that so it does work? Thanks in advance!

I believe you can just do

To start the detail you need to do without the . obviously
.[details=“Detail Name”]
Text inside that detail
.[/details]

This ends the detailing section, taking you out of it. Divs do similar things but I don’t think thats how this forum wants to work. im not an expert I’ve just looked at it and kinda shown the way the forum works 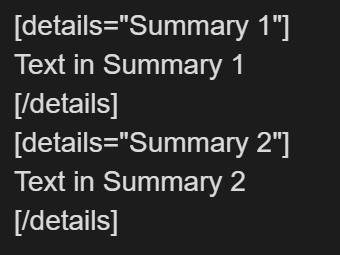 Thanks for the reply. Unfortunately that doesn’t seem to be the issue as I do use it like that. Either in markdown like that or in HTML like this:

The issue is that I want this:

which shows exactly like that in the preview. But once I sent the reply, it looks like this: 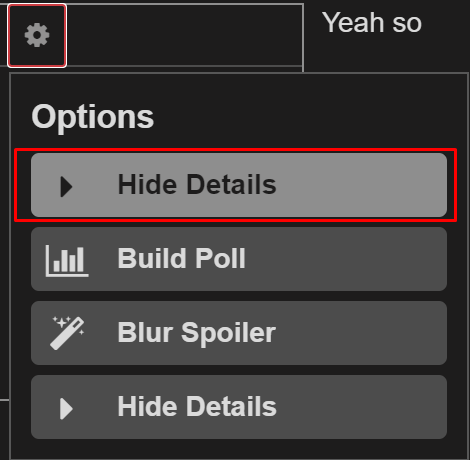 Not sure if doing it that way would help. And images need to be uploaded to the forum, so its just drag and drop into this edit area and it should be ! [image|SizexSize](upload://bunchofrubbish.filetype end curved bracket
Looking at this bit of your code I don’t think it recognises it as an uploaded file.
<img src="https://i.imgur.com/antXJwL.jpg; width=“auto”>

Everything else looks like it should work, the divs and the details, breaks etc.
Again, i could be wrong, just pointing out what i see

Ah thanks, I’ll see if uploading them to the forum instead of using a hosting platform works.

Well, it worked in the test I did in a personal message, but when I posted it, the pictures were gone again. And reuploading them (even with a different name) gives them the same link they had, but still gives the issue that the images can’t be seen. So I guess the issue with the images is that once they are uploaded they do work on the original post only.

Edit: the images still don’t work in the hide-details part of the post. So still no solution