Bogliq USA had gone through a period of massive growth; partnerships with Latin American design firms, Garcian automotive company's and Bogliq USA's first non-US factory. This growth had overtaxed the capabilities of Bogliq USA which resulted in unfocussed product that failed to interest US buyers. Therefore, Bogliq USA proceeded to consolidate their model line-up. Some models were re-purposed, others dumped and Mexican imports filling some gaps....

Bosun 215B.png982x645 574 KB
The Bosun is the result of a partnership between Bogliq USA and Garcian Motors Incorporated

The Bogliq Bosun is a Mexican built, GMI engineered, small car that Bogliq USA decided to license produce. This was undertaken in orer to relieve the engineering burden on the USA development team. The Bosun has unique details that separate it from the GMI ZX64/128, the front and rear styling is different as is some parts of the interior trim, but the overall style and interior presentation is essentially GMI’s work. The Bosun was sold throughout the America’s as a Premium hatch, but in the USA it’s a base model, with unique to the USA trims and engines ensuring US buyers will find plenty to love about the new Bosun!

Beagle 532AE.jpg1208x738 278 KB
Bogliq USA wanted the Beagle to be seen in a sporty, yet premium, light. Bogliq engineers also wanted to ensure the Beagle would be “Exotically American” and the AE variant definitely nailed that brief. A 3.2L, narrow vee, 8 cylinder is pretty much certain to do that!

Bogliq USA was going mainstream; The Buttress, Bosun and Bastion were now FWD and the old supercars were being put out to pasture. But Bogliq USA wanted to maintain a link to the past as well as build a small premium platform to keep the upwardly mobile in-house. The result was the E5 Beagle. Avante Garde styling and sophisticated engineering was combined with American traditions like RWD, V8’s and performance to create a unique driving experience that no other manufacturer could match. The AE variant dialled that up to 10 by debuting Camlift, a variable valve lift tech, to the existing Camshift, which resulted in extra power and improved fuel economy as well!

The most obvious symbol of the changes within Bogliq USA was the transformation of the Premium sedan, Baller, into a Premium SUV. This nameplate was considered the simplest to change, since it’d carry over the cachet of quality, and buyers were looking to Baller for classy style, not rigid tradition. The Baller would continue to maintain an “Affordable Premium” position in the Bogliq line-up and buyers would still have access to smooth, high efficiency, V8’s. Bogliq USA, based on focus group feedback, felt that the new Baller was going to take the SUV market and run with it; The Baller would save Bogliq’s bacon!

Bogliq USA had let down their bread and butter clients. Bogliq’s family cars had fallen behind their competition since the mid 70’s and hadn’t regained their mojo ever since. The A5 Buttress was the model to address that decline; easy to drive, fuel efficient and affordable. The car wasn’t as sporty as before, but the car drove well, felt safe and was comfortable. The Buttress was now finally living up to it’s potential!

Damn… that beagle is so fast… probably faster than my own entry., a V8 Sport compact entry… Havent seen that one, but i dont think i can say anything as i used the Midsize entry for a performance car designed to compete

Hakumai Automobiles 1996.
We didn’t have the best of times, but this year we brought something to the table. 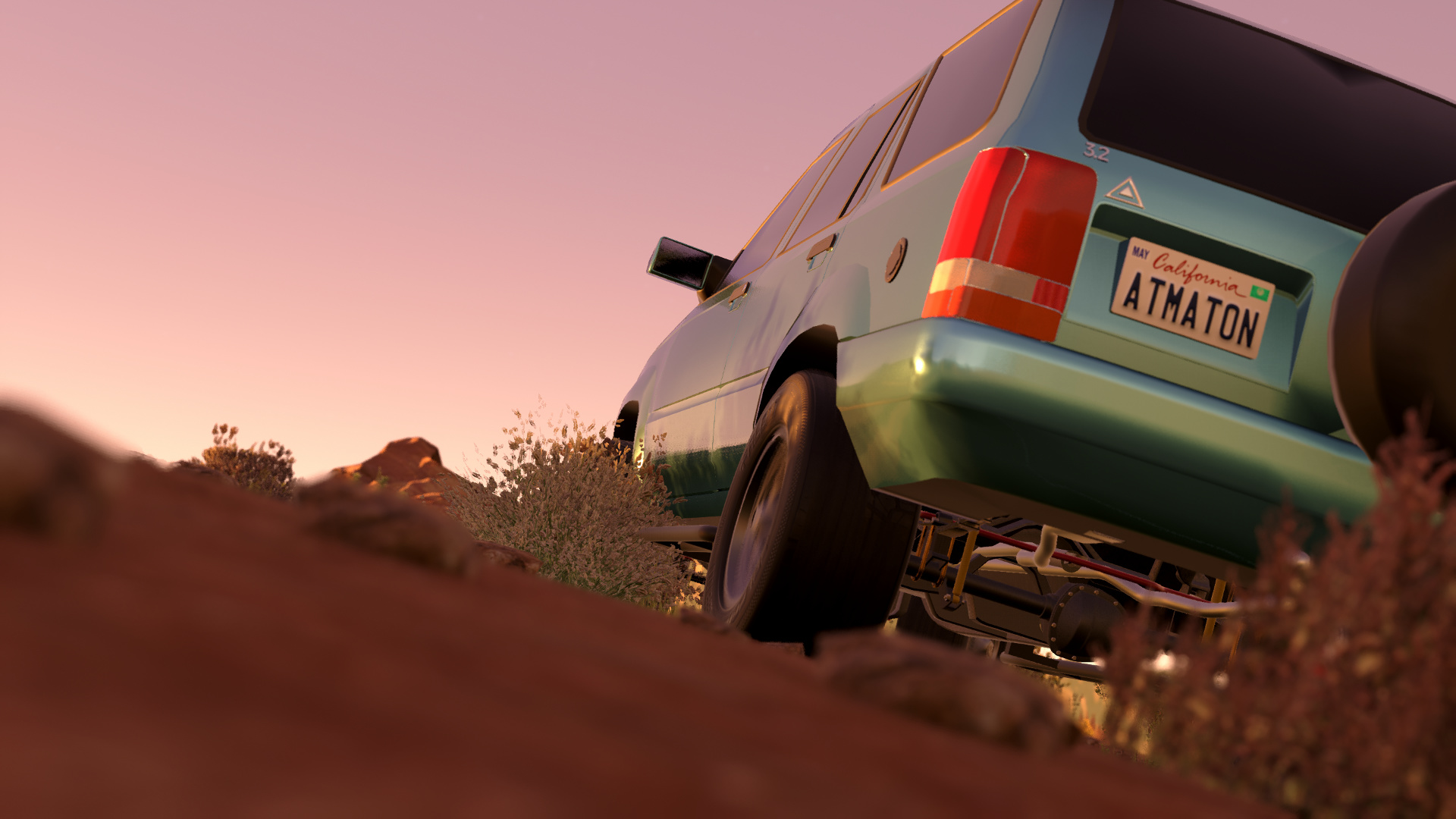 This is our first SUV.
Basic mechanicals yet comfortable, we’ve needed something to fill up the line. So here it is. a V6 From the Raider with some upgrades to make it suit off-roading. (God damn it i forgot the CHMSL For this car.) 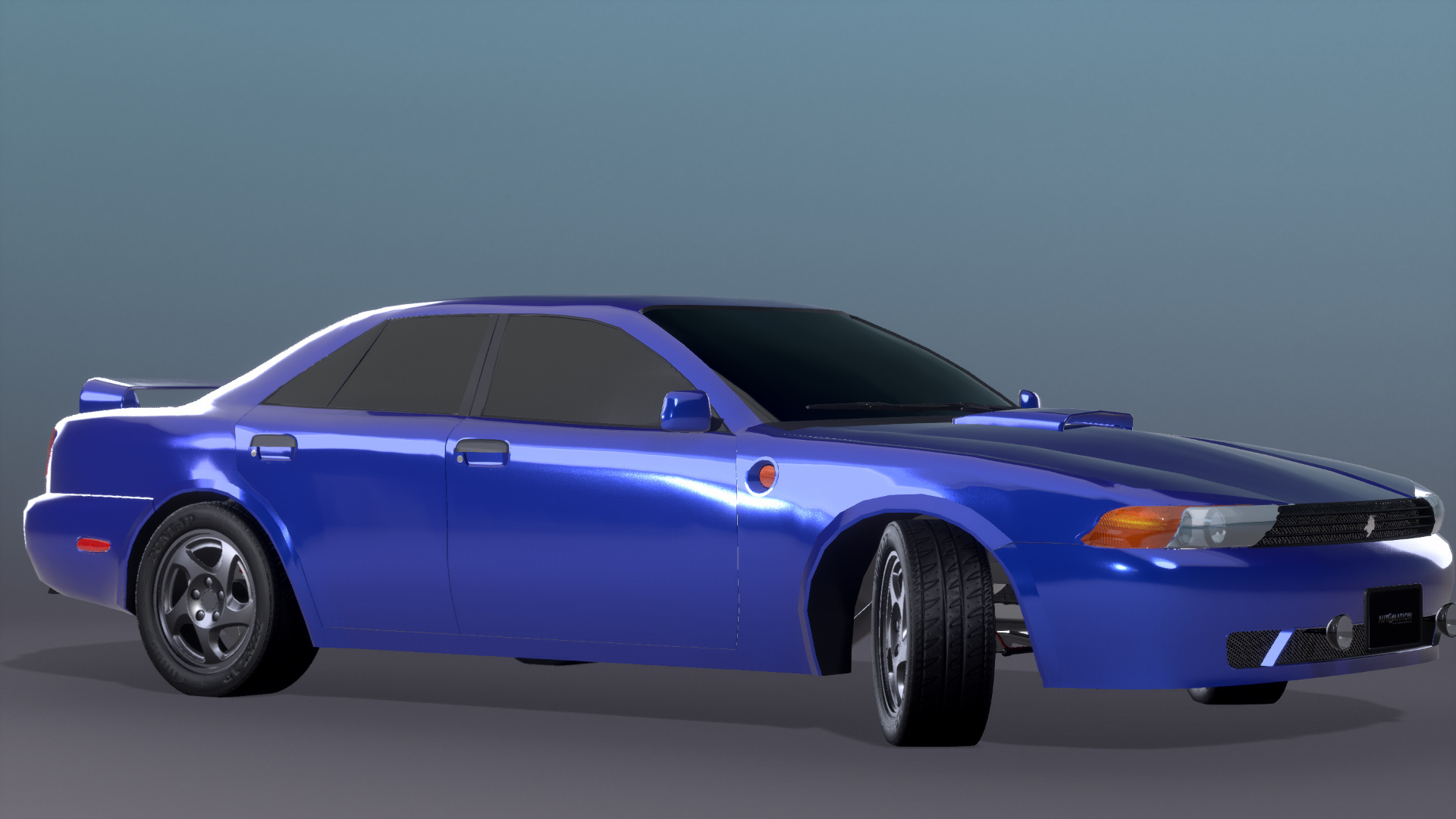 It has performance. It has the style, but it certainly has the ability to go fast. So fast in fact you’ll probably be wanting to do a street race. 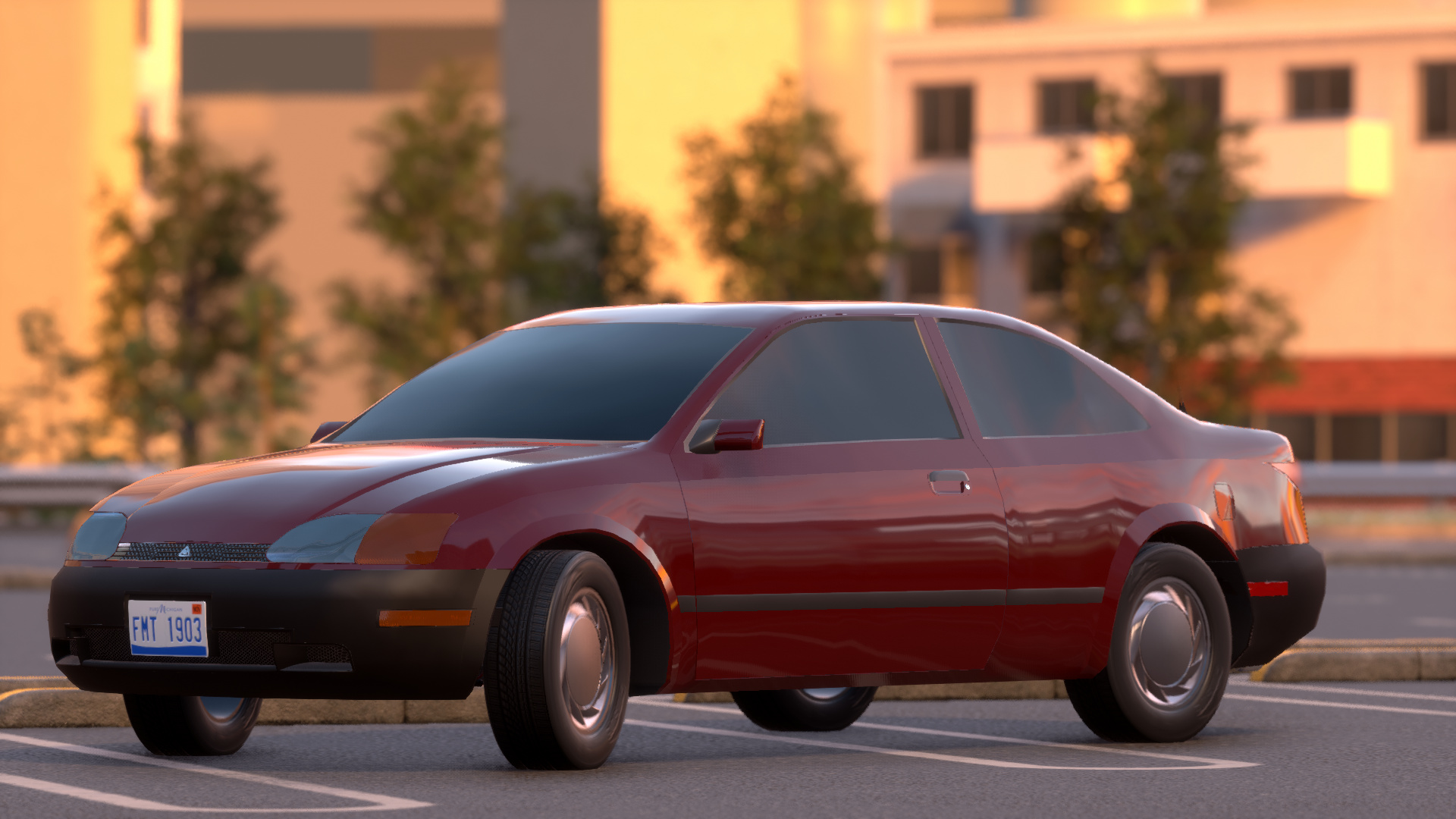 It drives, it has wheels, it has seats. That’s about it 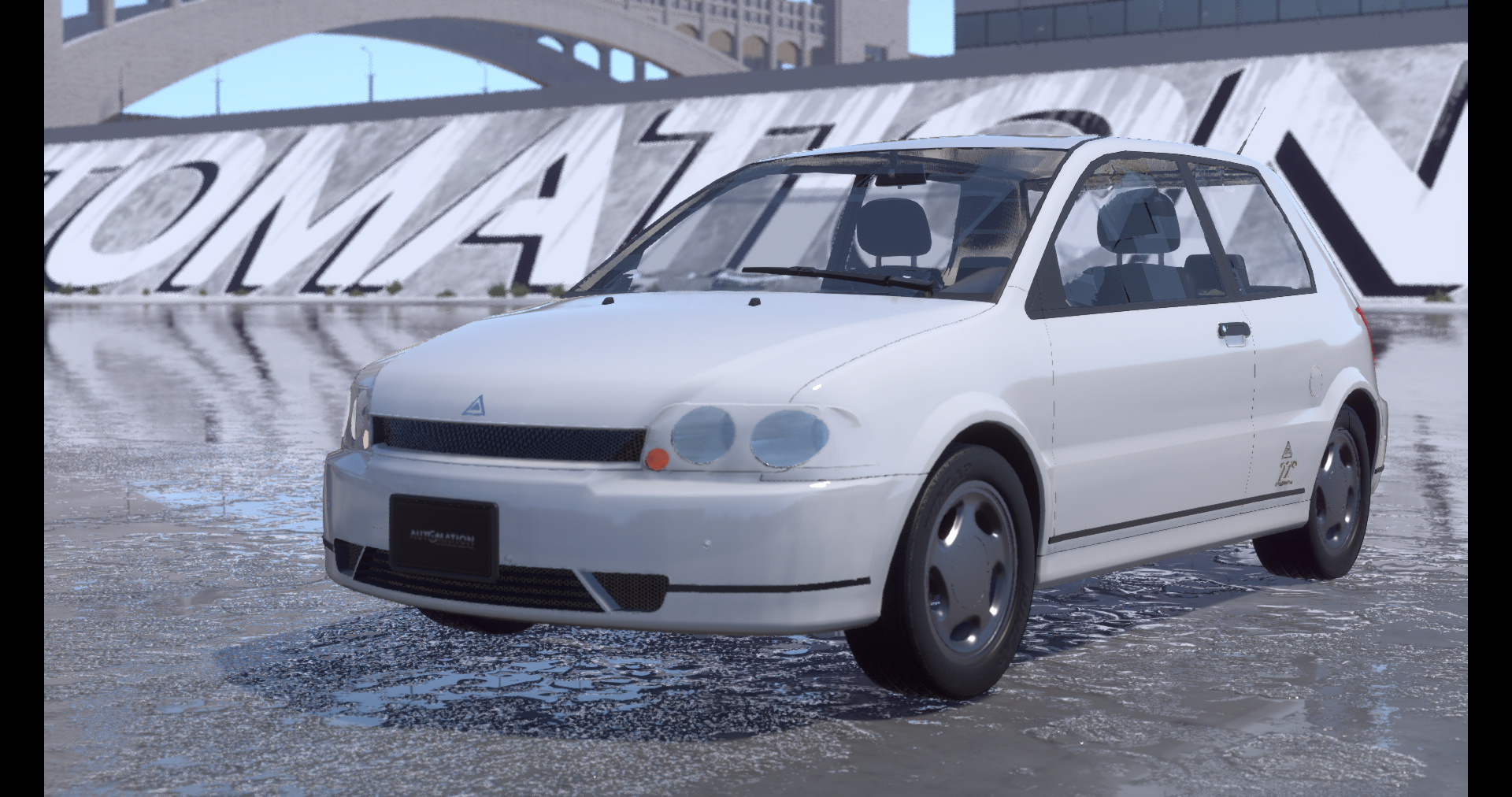 The compact successor to the 250XR of the past, It may be slow. but don’t let the looks fool you.

Something Something Deer And Hunt Ad slogan

Bambi subbrand is dead, but the name and idea isnt: The all the Deer And Hunt Bambi

Damn… that beagle is so fast… probably faster than my own entry., a V8 Sport compact entry

I think it fits the “Murica” perception of compact anyway, hahaha!!!

Murica Compact… you mean slightly smaller than the USS Missouri?

Attention: Bogliq line-up has been modified!!!

The E5 Beagle has been deleted from the official Bogliq lore and isn’t competing in Round 9… Here’s the car that will be taking part and flying the Bogliq flag in the Sports Compact segment.

It was no secret that Bogliq engineers didn’t like FWD; the A4 Buttress was meant to debut with FWD but the backlash was so severe the idea was dropped. But, with the competition trampling Bogliq in just about every market, the A5 was designed from the outset with FWD.

But the Bogliq die-hards refused to lie down and die. They started a drinking game one evening; you had to take a shot of Garcian spiced rum every time an engineer complained about FWD. Late in the evening, heavily inebriated, the lead engineer decided to find a way to make a FWD handle as well as any RWD. The result was the 132DLH. The main feature of the car was the new, quasi-prototype, CX V8; a 60 degree, 3.2L DAOHC V8 with both Camlift and Camshift. This engine revved harder than any Bogliq V8 before and was also frugal on gas. The suspension and interior was tweaked to maximise handling and grip with an extensive aero undertray ensuring the Buttress hugged the tarmac at warp speed!

Bogliq had cancelled the cancellation of the DLH program and was dropping variety of platforms in order to better market their core product; cars built by the people, for the people…

Since vic is not here to remind us, We have 1 day, idek how long left with hours. im not sure, correct me if im wrong.

Since vic is not here to remind us, We have 1 day, idek how long left with hours. im not sure, correct me if im wrong.

I’m here to remind you this weekend.

Ah ok. i thought you still was out of town. (I Did reference a car design thread here because im looking for an perfornance upgrade for one of the cars i submitted for next round to keep up with the times and a restyle.)

The original Generations tournament actually concluded with a round set in 1999 (although it could have continued beyond that, if not for a combination of scheduling conflicts and lack of lore for some entrants), but this one might not, in which case it could continue well into the 21st century. If it does, I’m expecting the next round to be set sometime in the early 00s (2000 to 2003).

The year for next round has not yet been randomized. However, since it’s a 4-6 year span between rounds, you can safely narrow it down to 2000-2002.