Thanks for the feedback, my bad about the plastic grills. When I made it, I thought about it as a matt black colored body part! 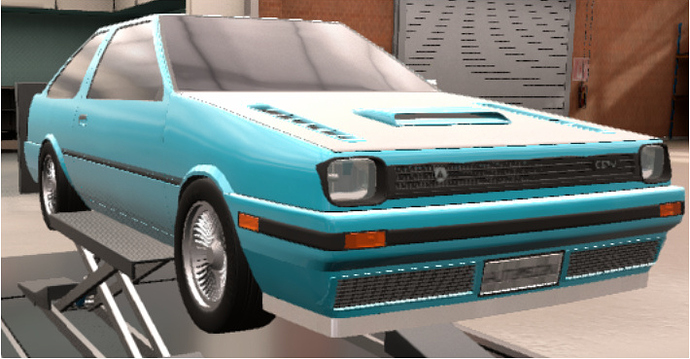 After Kishiwo was close to go bankruptcy in the 80’s, the top engineering team in Incheon started to work on fuel efficient mass market cars instead of the huge luxury flagships, that got the brand to a point, where it looked like it is the end. The first CETU got manufactured in Kishiwos hometown Incheon and was given to the South Korean president as a gift. This action was filmed and showed as a part of the CETU commercials and brought in more buyers than everybody expected.

From one day to another the streets of Seoul, Busan, Incheon and many more cities were filled with CETUs, nearly every tenth car was one of them, which could have been caused by a huge amout of taxi-drivers, that all went for the CETU instead the other major brands. The first cars got exported in 1986, mostly to western European countries and North America.

The CETU worked itself up in Europe, landing in the anual top ten in 1987 and 1988, but after that the sales plummeted, because the price of the CETU wasn´t cheap enough anymore and other brands (like Kia) took advantage of that which left the CETU getting good sales figures in the following years aswell, but not even close to the amount they sold in 87 and 88. 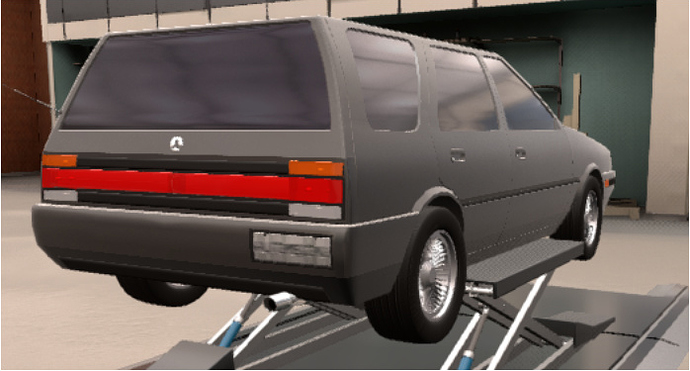 The Kishiwo CETU sold huge numbers in the USA from 86 to 88 but saw the sales colapse for the same reason as in europe, their direct competitors offered their cars for less money. In Canada and Mexico the CETU sales looked very promising until 1990.

The last two years (91 and 92) were quite interesting, as in 1991 the CETU sales dropped by 50% in compareism to 1990 but then in 1992, as the all new Kishiwo Katoya, the sucessor of the CETU, was on the way to the markets of our earth, the sales strangly increased by nearly 40%, which caused the delay of the Katoya by three month as the Incheon manufacture needed to produce way more CETUs than planned.

I really dig this design! It has a sort of Miata-esque quality in that it is sporty without looking overly aggressive (well, at least until the current one). I also love the taillight design, too; it’s really of it’s period.

There’s a hint of Mustang up front and 6-series in the back, but in my opinion this seems to take the SUV-coupe idea a bit too far. It is definitely unique, though.

As for your color palette, it looks nice, but Sky Blue is a bit too much like neon cyan to not feel out of place in any decade other than the 90s, while Juicy yellow is clearly too pale and washed-out - a deeper, more saturated shade would look much better on most cars. 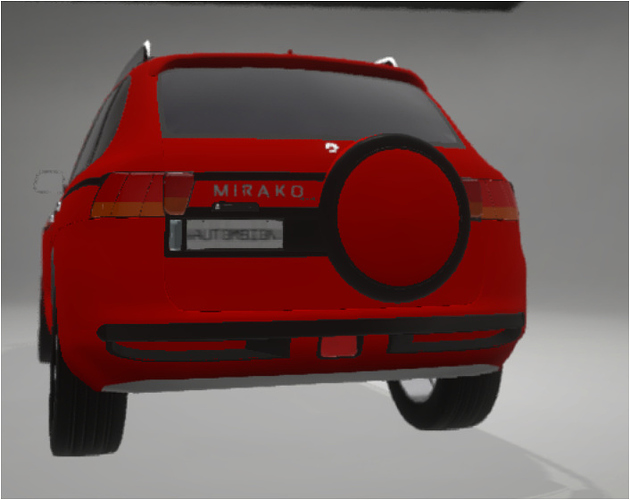 2007, eleven years ago, this beauty got to see the light of our world for the first time. You might ask yourself, who I mean by “this beauty”? Simple answer, it is Kishiwos first real SUV, the Kishiwo Mirako. Many people thought “what a Toyota rip of South Korean shitbox”, but their opinion changed in 2009, you might remember the economy drop that made everything way to expensive, not the Mirako. It started from 15420$, which meant that it was the first choice for families, that wanted to replace their mid-90’s wagon with something fancy and family-friendly. 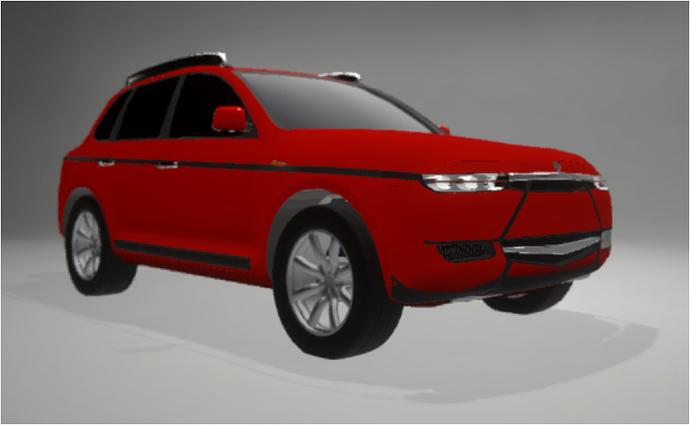 In its selling period from 2007 to 2012 there have been three different versions available (Color, Inspire, Luxor) with five different engines to pick.

The Kishiwo Mirako first gen had a pretty succesful lifetime in a horrible economy, dominating the South Korean sales charts for three years (2007-2009), selling many units in Europe, Australia-New Zealand and South America. The USA, Canada and Mexico top 50 sale charts included a Kishiwo for the first time, hitting a impressive 20th place in the USA in 2007.

“An accountant who doesn’t even know how to drive a car could design something with more refinement that this dull, messy creation”

South Korean brand Kishiwo don’t often come up in the regular arguments in the Splendid Auto Monthly office, and even then, we only seemingly remember them for making millions and millions of ultra cheap runabouts in the mid-80s that the entire elderly population of the UK lost their collective minds over.

What about today then? Well, I’m driving the company’s latest creation. The Katoya is the company’s compact segment offering, and this specific trim - the Colour trim - is a sportier coupe model. Or rather I should say, hard top coupe, because you can drop the roof on this thing. Not bad for a compact.

It’s a big dissapointment from the get-go though. The styling is so odd, and leave you questioning. Why are the front indicators so large? What is with that weird bit of chrome along the bottom of the C pillar? Why are the tail lights so damn small?

It’s a big shame, actually, with those tail lights, given that styling wise, they actually look quite good. How they got approved being that small before being sold in the UK, however, is another question.

The sort of it, however, is that the looks just don’t work. It’s got a case of anemic mid-2000s American styling at the front and the rear looks so odd with those tiny lights.

The interior is better, being a fully premium layout with leather, metal finishings and the usual tech. Not much to write home about, though electric variable steering makes it very smooth when steering around town. One thing that is odd, however, is that a lot of the styling and features seem to point to this being some kind of sports car - it comes with launch control, after all.

Because it isn’t. It has a 1.4l VVT/L i3 up front which, will producing a decent 100 hp, is certainly very nice on a hatchback, is about as sporty as a pair of wellies. Being on the larger side for an i3, it’s also quite rough feeling in the mid and upper rev range, and the noise is about as exciting as a microwave.

Despite being made entirely from aluminium too, the car can’t even mange 0-60 in less than 11 seconds, with a positively average 6 speed transmission that just…kind of just does its job. Nothing to write home about, that’s for sure.

It’s the handling, however, that is properly backwards. There’s clearly been no consideration for understeer, making the handling feel undertuned and far from refined. It’s made worse by the fact that there is clearly no difference in the shocks and springs at the front and the back. The lack of consideration for weight balance makes it feel very front heavy and properly all over the place, and is made worse by the huge roll angle that almost convinced me we were really driving a 1970s off roader. It’s horrendous.

Even for a bog standard, every-day compact, the handling is dire. The engine passes, but even then, it’s just such a drain of excitement that it can’t save the car from being outstandingly dull and incompetent on the road. And what’s the point of having that coupe body and a roof you can drop if you can’t enjoy yourself while using said features?

A caucophony of poor design choices that they clearly came up with while make the tea and decided would “probably do” for the final car. Avoid at all costs.

Cheers to @just4 for lending me the car!

A harsh but appropriate verdict - this is one of the worst cars I have ever come across. Even if it handled better it would be too slow to be anything but pointless, and giving it a better engine would not make it look better either. Whoever signed off on this abomination deserves to be executed on sight! Just kidding - they should merely rethink their approach to designing a car.

Anyone suggesting someone should be killed for making a bad car has clearly lost all sense of principle and reality.

Whoever signed off on this abomination deserves to be executed on sight!

Lack of diplomatic solutions to interpersonal discrepancies: The movie

At this point I think our green friend is playing a character just as you are, emulating an internet commenter free of empathy who’s never driven the car in question and just takes the word from a not necessarily unbiased critic as a fact, even though a driving experience is always subjective and thus cannot be rated.

I was referring to Kishiwo’s engineers… And I apologize for the bad joke. But I understand that it would make no sense to jump to conclusions prematurely.

Ha! Are you suggesting he’s playing the character of a [car company name]-fanboy in some YouTube comment section?

Everything older than this is outdated!

I guess it`s time for a new beginning

The Kishiwo Privo is a compact car, built to succeed in europe and the americas. It is available as a hatch, sedan and station wagon (europe only).

at its release in january 2020 there are 3 variants available:

those can be paired with 3 different engine choises:

grafik.jpg1418x676 445 KB
The current moneyhoes at Kishiwo (the trendmobiles)
from left to right, as they shrink in size, the Nardo, Cantu and Tudor

Although the fronts are a bit generic and/or bland. The rears do have a tad bit of complexity with the lights and even though I do like it. It does not flow with the front.

grafik.jpg1498x601 523 KB
let me know if someone wants a little showcase of each car (pictures and information)

@desperatedonut5 thanks for the feedback, I am just getting back from not playing 2 years or so

The first generation Kishiwo Lagor, a midsize sedan especially designed to be sold in north America, was the second selfengineered car of the Korean carmaker. keeping that in mind, it was not the most refined car out there, but it did sell better than expected, as it was a major hit in Kishiwos homemarket and the USA.

The Lagor was offered with two different engines. The 2.0 liter inline 4, that was first introduced in the 1979 Cetu as a base engine. With its groundbreaking 106 horsepower it was underwhelming and as the Lagor was not the lightest car, a fuelefficiency of 15l/100km was an average, that would not have been acceptable in the american market. But, this engine variant was only offered in the korean market, and that at a low cost. The other engine was newly developed for the Lagor, Kishiwos first V6, a 2.8 liter one that did put 123kw out.

It was offered in four different colors