A luxury car like no other, the 1959 Elwood Iroquois Deluxe is the ultimate expression of what a luxury car is. The only way a self respecting man can travel.

With the most comfortable vinyl seats, smoothest V8 and it’s drop dead beauty the Iroquois combines all the right stuff to create a car you’d love to own.

The Commander (E8CIP) V8 delivers exquisite smoothness and power into one engine and moving the Iroquois with pep and poise.

The Iroquois compared to an unaltered body

Easily the best-looking 50s American land yacht ever. The amount of work you put in to transform a blank slate into this jaw-dropper is enormous but well worth the time and effort.

Absolutely beautiful. I love it

It is absolutely gorgeous. would it be possible to download that one to reverse Engineer it and maybe make my Cars look Decent?

The Iroquis Brillare Special is exactly the kind of car a silver screen goddess like Marilyn Monroe or Grace Kelly would drive in Beverly Hills back in the early 60s. I’m sure it, like the Deluxe sedan, would be worth hundreds of thousands now at most (for the best examples), such was its extravagant opulence.

This latest before/after picture could be a teaser for a facelifted Iroquis Deluxe/Brillare - very slightly less ostentatious but still with plenty of presence.

Before I make a proper post(s) for my recent cars.
I’ll just drop this ad here for the time being.

A little showcase of a car I’ve been making for around half a month.

With the release of the recent update and with the use of 3D fixtures. I was able to hide the original window lines and creases of the base body.
When I started making the 5-door version the update came out, which is why it has this done and the 3-door does not, but it serves as a good before and after.

A little history of the car.


Work In Progress stage back in late October.

At the time I just wanted to create a little 80s Euro shitbox.

“Finished” stage, or atleast the first time it was seen on #showcase

Or specifically, at this stage it had a name and a purpose. A budget family car from my Belgian brand ‘Rosker’. Released in 1982 to compete with the Golf and other cars competing with it. This was a base 1.1L engine with some nice trim, such as over-fenders and small fog lights.

Here’s where I made 3 trim that span from base entry level, to mid level trim and then a high level sporty trim.


The GT trim is more of a nice trim with some pep instead of a blazingly fast hot hatch, essentially like a M-sport or S-line kit for this car, since it only has around 80-something HP (not final tho).


Not meant to be a factory race car, but more of a privately made race car, will definitely try to do this one up properly. Since the body doesn't really support large or wide wheels, I used another car that could have very large and wide wheels and hid it's body and chassis in the photo scene.

From riches to rags (One off-challenge) Community Challenges & Competitions

Now with fuel injection as standard. Clear lights, thiccer bumpers, no partition in the doors and wider tailamps. Gives the old Tigo a fresh look for the mid to late 80s.

There is still a lot I have planned to do with this platform. A merger with Bermag, with that rebaged Tigos as Bermags.
A detailed lore and specification sheets with adverts.

However I plan on “retiring” from automation for a month or till the end of the year to finish my own projects and do some much more important stuff, so I will uninstall the game from my HDD. Since with this update I will never get anything done and if I keep looking at what people are creating with these new tools… I will get tempted, so a break is in order

So that’s all in the future, for now, I hope you like my little shitbox, or as Nich put it…

Cya later, can’t wait to see what people create with 3D fixtures in a months time or a little later.

Man I love this car. It’s so detailed! The wip at the start is at the same level of my finished cars! And that reworking on the windows is beautifull! Good job, and bood luck on your personal projects!

I hope it’s not too late, but could you be a compadre and share the car file? I wanna study how you did some things.


The Ultimate Expression of an Italian Supercar

Bringing the Italian supercar spirit into the modern day. 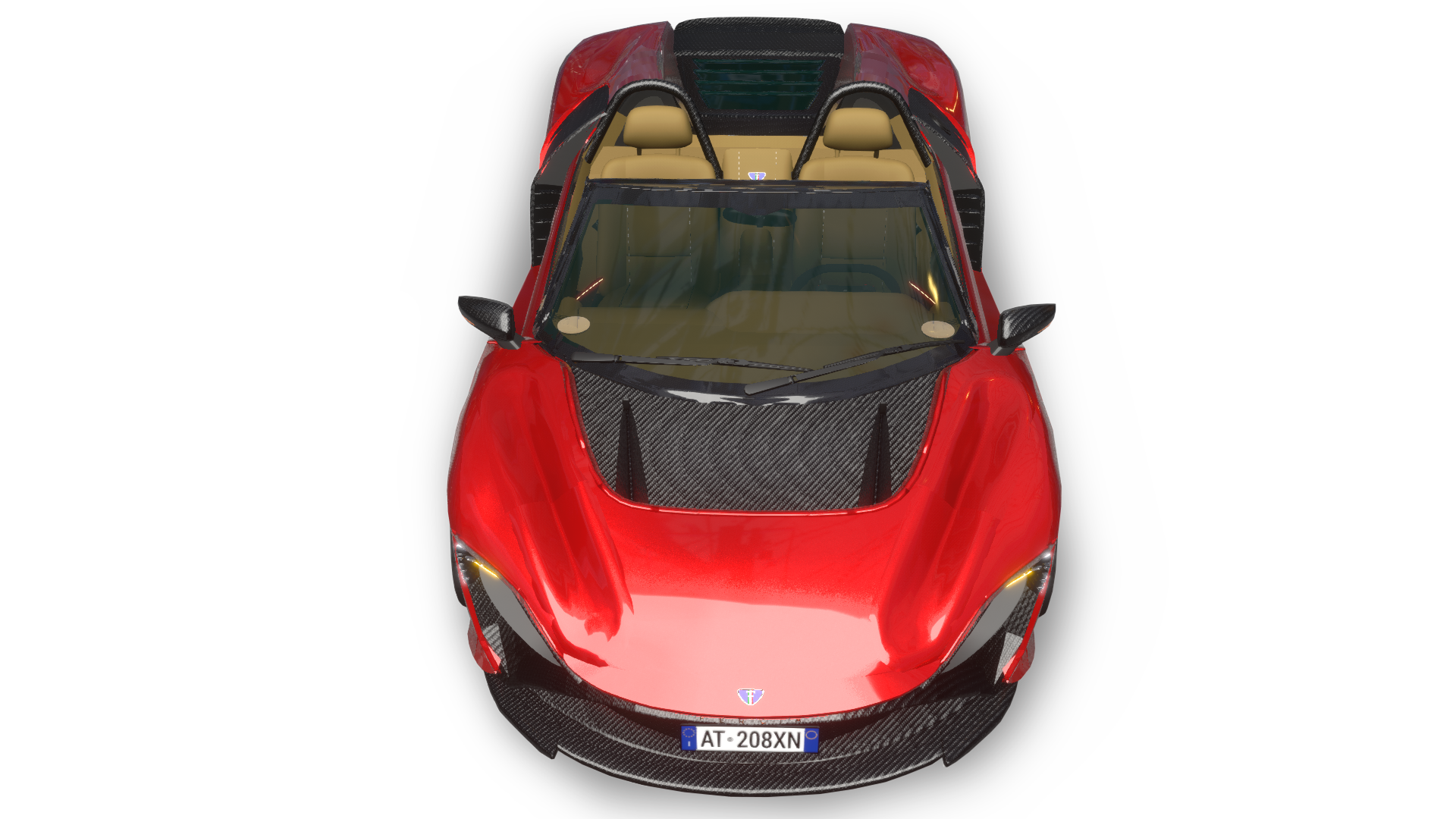 This car did not take a day to complete, let's be honest here :p

It started with a simple idea, to test out the 3D fixture feature, and see what can be done with it from my end.

And this car changed a lot during this process.

It started with trying to do something simple, having a cut-out for the lights with the lights being flat , that contrasting with the shape of the body, highlighting a thing that couldn’t be done before.


Then came a drawing to work off of.

Started with the shape of the front end cutouts and started to create the flowing lower section of the car.

Getting the lower part of the sides done.

image.jpg910x467 161 KB
Also added some body shaping stuff around the cut outs to create a smoother and more detailed look.

At the time, the front end was nearly done, was starting to work on the sides and figure out how or what to do with em.

Had created an interesting side profile, was happy with the progress.

Started getting somewhere with the rear at this point. Also refined the design of the side.

image.jpg831x467 161 KB
Trying to have a similar rear end to the front end was the goal with this rear end, however was never very pleased with it, tried to adjust it in many ways. In the end I'm very happy that I decided to move on to a different design.

Time came and I started drawing up a new idea for the rear end. With this one, around 80% of the rear end surface was handmade with 3D fixtures inside the actual original body.

image.jpg831x467 165 KB
Now this design wasn't yet right, didn't look amazing on it's own and certainly didn't go with the front. But it was the right step towards the end goal and showing promise.

image.jpg866x467 129 KB
Readjusted the size of the inner piece, which consisted of a lot of pieces, making it more squashed and in turn more sporty and aggressive. Thinking up a better tail lamp design with this and trying to see if I could do a similar slot design that is on the front. In the end this base was the one I'd run with.

New rear-end developed..... what about the front now?

image.jpg831x467 158 KB
Adding lights to it made it look... right, so adding other parts on it got it near being finished. But now..... the front is a little out of place, isn't it? Essentially the front needed a large open fascia like on the back.

Time came to redo the front.

image.jpg831x467 189 KB
Drawing up a few ideas on what to do with the front, in the end I looked at the back and used the sorta swoosh what starts from the bottom and curves straight up to the lights area. This luckily went fast as the main idea was conceived.


This was one hell of a way to make most of my Birthday go past, but at least there’s still time to go out.

Anyway, in the future there might be a functional export available on the BeamNG repo, after I can get a certain person to work on it, since the car is around 500kb, so it needs editing to be derivable in Beam.

This is, without doubt, your best car design yet, which makes the following claim much more believable:

The Ultimate Expression of an Italian Supercar

At worst it’s not too far off, at best it’s dead-on accurate. Design-wise, this is the best use of the R8-esque mod body - I’m suspecting you used the larger, longer-wheelbase version. And although it took several days to complete, the final result was definitely worth it. As for engineering:

Obviously, game engine limitations make it impossible for anyone to replicate that setup exactly - I’m suspecting you installed an AWD system and turbocharged the V8 to simulate a petrol/electric hybrid torque curve. I could be wrong, but hybrid or not, the MGR650 is the absolute pinnacle of your efforts to date. Well done!