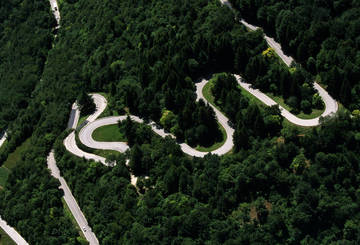 Released on June of 1989, it was the third generation of the Zender saga.

And to keep the weight low, some of the body panels, like the bonnet, doors and fenders, they are made of aluminum.

And a cool detail: it comes with a T-top!

During the 1987 Paris Auto Show, it was shown the Z-Millenium concept.

The prototype was intended to show Montes’s vision of the sports vehicle of the 21st century.

Among whose characteristics were an all-wheel drive, with three differentials piloted electronically, capable of sending a range of 0 to 100% of torque to an axle, even in a single wheel, as well as an electric steering to the 4 wheels, tactile control, 4-way ABS, stability control, traction control, active aerodynamics, and piloted suspensions, as outstanding elements.

The top trim, the GTS Turbo, it comes with an improved EG630R, used on the old Zender generation. But now, improving the low-end performance and efficiency.

The highlighted features of this trim was the E-AWS. turning the rear wheels 1.5º as much, to improve cornering and stability; the electronically-piloted air suspension. Providing a good level of confort, plus an exceptional dynamism, and the active aero: the rear spoiler can be adjusted in height, depending on the speed and angle of steering wheel, and whether it is braking or not. The same with the front spoiler. And, of course, ABS, plus TCS.

The other trim, the 3.0 GT, it comes with the naturally aspirated trim of EG630R.

It does not have the equipment of the other version, but it was remarkable the suspension with electrical regulation of hardness, the variable hydraulic power steering, and seats with electric recline, and heated.

The restyled Zender, aesthetically, it changes the headlight design (now, is transparent), the taillight glass, the front bumper, and the wheels.

The air suspension it was changed by a progressive active suspension, that it was less complex, and with similar efectiveness.

On the security section, now, we have 4 SRS airbags (driver, co-driver, and door airbags).

On the comfort section, now, we have a cassette+CD HiFi radio player, developed by Technics, and new-design seats.

Breaking news: Montes has bought the 100% of Gabatron Automobiles

After two months of rumors, Montes announced the purchase of the French brand Gabatron Automobiles, for an economic value, which has not yet been made public.

At the press conference held at the headquarters of Montes, in Barcelona, ​​the leaders of both brands have expressed great satisfaction for reaching an agreement, as it will benefit both brands economically.

“Thanks to this agreement, we hope that Gabatron will once again obtain good sales results, as well as recover again, the reputation it once had,” said Yves Saint-Guillaume, CEO of Gabatron.

“Customers and followers of each brand can rest assured, each brand will retain its DNA” remarked Víctor Montes, CEO of Montes.

Each brand will continue to maintain its distribution networks and after-sales service. The transaction will be effective next week.

With an attractive Art Deco design, the Sport GT was one of the last cars designed by the brand, before WW II.

Designed in late 1939, it was the last Montes car that featured an Art Déco design, and combined this, with a streamlined line, looking for a balance between elegance and aerodynamics.

As details to highlight, had a smooth front, to improve the CX (the intake was behind the bumper, and the entrance of the radiator, at the bottom), and the exhaust that passed through the rear bumper.

to ensure an optimal weight distribution, the engine was arranged in a central, front longitudinal position, which powered the rear wheels, thanks to a 4-speed gearbox.

In the braking section, emphasis was also placed on the use of ventilated drum discs, which stopped the car from 100km/h to 0, at 53m.

In his time, he had exceptional performance. Able to stand up to larger models

And in addition to amenities, it also had a simple, but luxurious interior. Where leather and wood were the materials that stood out.

In this car, in short, everything learned in the competition was put into practice.

Of this model, only 27 units were made, due to the outbreak of the war, of which only 5 survived.

Montes has summoned 80 members of the international motor press to the Castellolí circuit, where he has presented the intermediate member of the Urban sports versions family. Among the 230hp of the Turbo GT, and the 401 of the MRP 3.5. The RS Turbo.

This version, unlike the other two, equipped with integral traction. But the most interesting thing is under the hood: it equips a turbo engine, 2.5L, 5 cylinders, capable of developing up to 300cv at 7500 RPM, and 330Nm at 4100RPM.

Apart from specific elements of this version, such as the bumpers, and fog lights on the lower lip, as an extra, you can order the golden rims made of magnesium, made by Rays, as well as the Apple Red Metallic paint.

As for transmissions, it comes standard with a 7-speed manual, as well as an MDC of 7, as an option.

You can already reserve at the dealership, with a starting price of $ 40,715.

For media that have not been able to attend the event, as well as for those interested, a test unit can be requested.

Look at its defined line, which mixes sportsmanship with elegance. Its marked bumpers, and its captivating wheels.

Do you think you’re ready to tame their 566 hp?

The X90 MRP S, carries the same V12 5.8 biturbo from the X90 exclusive, unmodified. Because the MRP engineers, they wanted to focus on the dynamic section.

For this, the suspension has been changed by a pneumatic, fully piloted suspension, with specific setup, and lowered 3 cm. The brakes, changed by a carbon-ceramic brakes of 4 pistons in front, and 2 behind, with discs of 365 and 285 respectively. To be able to stop the car from 100 to 0, in an impressive 34.7m, without any fatigue, whatever the driving style, despite its 2177 kg.

The rims, of 21 "and specific design, are made of a magnesium alloy, to reduce unsprung masses, and are shod with Michelin Pilot Sport 4 sport tires.

And the transmission, has been changed by the MRP of 7 speeds and double clutch, to be able to extract all the potential to this powerful engine. And of course, it transmits the traction, to the 4 wheels, thanks to the differentials piloted electronically (central, rear and front), to guarantee the maximum effectiveness, as well as security.

We reduced the weight, changing the interior materials, and removing a seat, to have in total, 4 individual seats. A fifth can be ordered as an option.

Soon there will be another MRP trim, which will equip a V8.

From 1 September this year, manufacturers we will be required to homologate our new models for the European Union, under the cycle WTLP, instead the NEDC. This means that both consumption as emissions, is measured in real conditions, road. So consumption approved will vary and taxation, as well the declared fuel consumption.

Our current range, to be approved under this new cycle, does not affect the tax burden.

The only exception is the Excelsior and Amagosta.

And for that reason, we have asked the moratorium to wait for the next generation of both models

In the 1994 Geneva Auto Show, Montes presents an unexpected surprise: a concept car, with a futuristic line, active aero and cooling, advanced composite materials, active suspensions, and a 3.5 F1 V10! (the 1989 F1 engine it was used, but detuned). That car was called Eterna. And if in the 90’s you were a child, maybe you had a poster of him hanging in the room.

In Spanish, Eterna it means eternal, and it symbolizes the continuous search of the sportsmanship, benefits and innovation of the brand.

The Zender ZE3A, one of our favorite cars in our headquarters and one of the most beloved automobiles ever from the early 90’s. We considered this car a masterpiece at that time, but the japanese wanted to go further and came up with this in the 1994 Tokyo Auto Salon. The guys at Veilside did an amazing job with the ZE3A, but this demo car is not just a beautiful body kit, under the hood the EG630RT is pushing over 450hp!

This demo car was sold after the show, then was listed in an auction in 2008 and a week ago was seen in another auction and sold for $93,000.

A new era just started that season for the DTM and Super GT GT500, unifying the rules, and, after a 10 years hiatus, Montes decided to return to the DTM, an entering for first time, into the Japanese Super GT, in the GT500 class, and the chosen model has been the New Amagosta.

The engine is the established by the rules. An advanced 2.0 DOHC 16V turbocharged engine with direct injection and 500hp.

(If you wanna see the old, ugly and overengineered Urban MK2, click here)

But in 1978, Montes started the development of the next gen Urban, codenamed U2, and used the same platform and engine family as the U1 (MK1 Urban), with improvements over the efficiency and performance.

Other of the big improvements was the design and the materials quality and adjustments, as well the safety.

During three years of development, finally, during the 1981 Salón del Automóvil de Barcelona, the car was unveiled, and was the protagonist of the show.

Comparison between the U1 and the U2

Unveiled during the 1990 Salón del Automóvil de Barcelona, the car changed dramatically on all aspects, not only on the design: the car uses now a new chassis, featuring now double wishbone suspension on the rear axle, McPherson on the front, new engine series (the full-aluminum F Series was the replacement for the aging G Series, except for the lower trim), and it was the first launched model from the brand designed by Hiroto Matsushita.

The development started back in 1985, when Montes, like the U2 Urban, requested to Bertone the design, meanwhile in Barcelona the development of a new engine series and chassis started.

In 1987, Bertone finished the design, and was presented to the brand, but the executives weren’t very satisfied, saying that the design was too bland. So, Montes refused the Bertone proposal, and it was decided to be designed in house again.

And here comes Hiroto Matsushita in action, the new chief designer back in 1987: during the 1988 Geneva Motor Show, the Montes NSR was presented, and used the platform for the Urban MK3, the aesthetical design features, but not the new engines, that were still under development. The design was really futuristic.

Finally, the car was launched in 1990, and the world was shocked with the smooth, aggresive and modern lines. The fact is that it was too modern, that he didn’t needed a restyling, except for small aesthetic enhancements (painted mirrors, etc), and equipment upgrades.

The old G series was a good engine (both 8v and 16v), but was starting failing against it’s competitors, with lighter, more fuel efficient and refined engines. So, a new 16V with VVT (available in SOHC and DOHC), full aluminum with port injection was developed. The result: more power by capacity, more torque and power over all the RPM range, better fuel economy and emissions. Later, in 1995, the engine received the VVL technology.

Turbo versions were used. In this case, on the Urban 2.0 MRP Turbo, and on it’s race version.

That engine series was also used on other models from the brand until 2009.

The only model that uses the G Series engine, discontinued in 1995