I was going to suggest a small engine, but I’ve seen you have the 1.3 in development, so that’s it.

I don’t like the small engines because the ideal to move a 1400kg car is minimum 125HP, and I can get this power with a 1.0 or 1.2 engine, but to get this power you need to rev more the engine, needing more fuel, and the reliability decreases (because in the <1.8L engines I use low friction pistons in the non-sportive engines or low-fuel consumptio engines), and setting a turbo to be smooth, minimum lag and the max torque under 2000 rpm you can’t make, for example, a 1.0 125hp engine without lag. [/quote]

I know what you mean…, I read urban on the post and never seen that the urban thing weighs 1400Kg

Yep, an engine with that little displacement needs a turbo, but without a compressor helping at low revs is really tricky a turbo sys without its respective lag (till around 2000 revs). I think that a turbo with an ‘economic profile’ works relatively good in Automation (might kick in a bit sooner, but its ok) e.g. 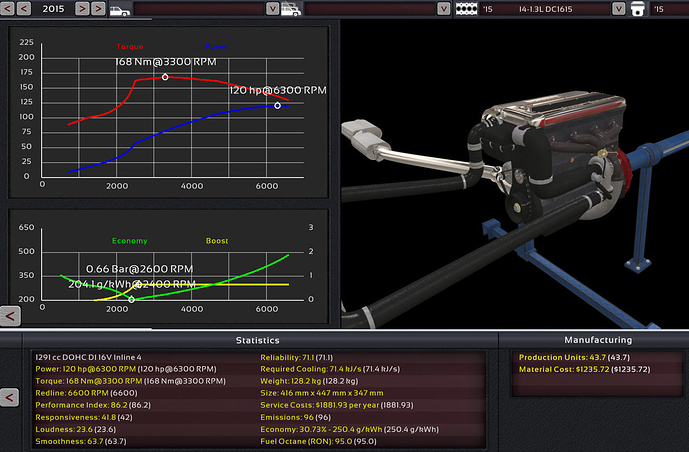 I’m agree that being an urban car you need a smooth power delivery, and a NA engine accomplish that goal in the best way possible.

This is my new (and the best turbo engine created by me at the moment) engine for the Urban and other models: the new DiS-T (If you think any improvement for the engine, comment). 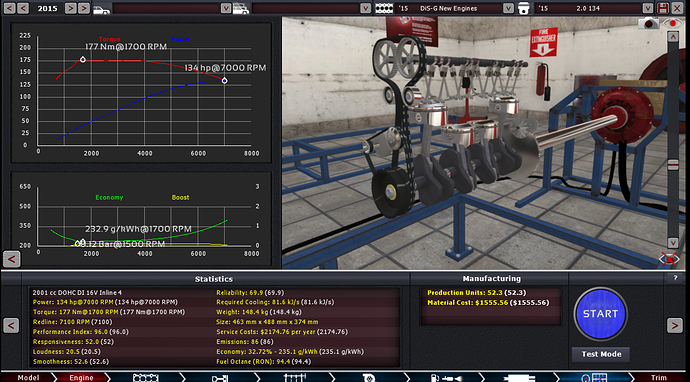 The key: set a low pressure in the turbo and a 9.x:0-10.x:0 ratio compression, and a small exhaust turbine to had a good responsiveness.

Your curve is similar to my 1.3 T engine.

I made this version, keeping the low friction pistons. 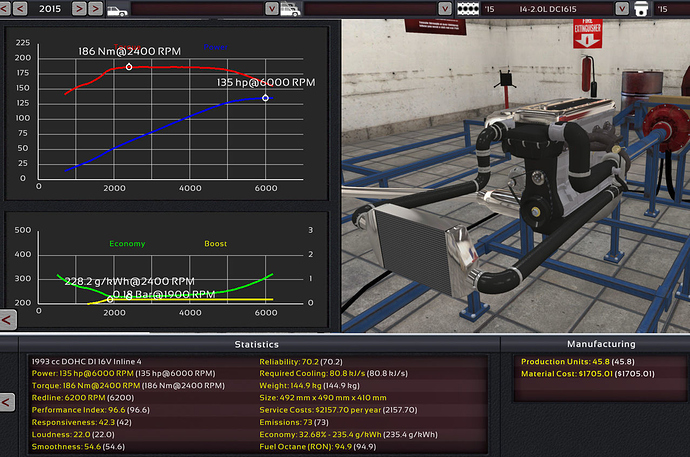 The problem with these engines (turbo and/or bigger displacement), for an urban car, is that their service and manufacturing costs are more expensive than the NA counterpart.
In my opinion, a version with low displacement (having bigger engines in that model) usually means an entry level version or the like, so you would like to sell it like dognuts (cheaper = more revenue or a competitive price - thinking about the tycoon mode).
A 1.3L NA engine, a bit underpowered for a 1400Kg thing, but cheaper and reliable. 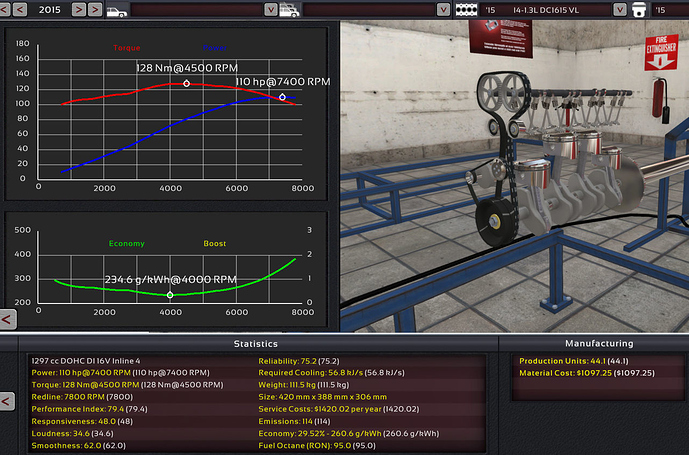 Thanks for your engine! This is the engine that I was finding to make!

In Montes, the policy is to make a N/A and turbo engine in each capacity in the case a model receives a new turbo engine, and the consumer can choose a wide range options: the sensations and satisfaction are better that the costs, because you can get more money doing this.

Since today, Montes can offer race engines for all brands and only race use, only by request via PM.

The client can set a conditions, like the min. reliability, costs…

Are you ready to see the model that redefines luxury?

With all of you, the new Montes Excelsior (designed by the new Amagosta designer): 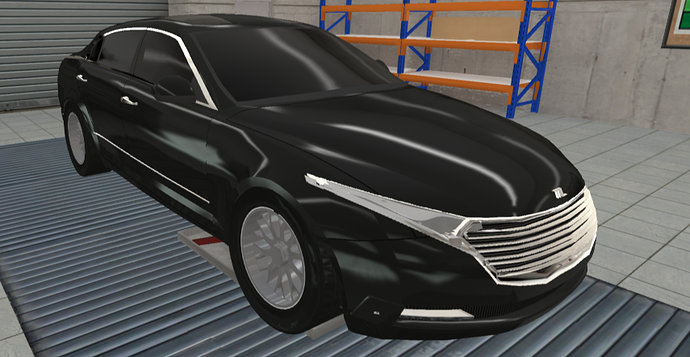 The engines are in development, but the max. capacity available engine could be the 8.0L V8 N/A.

This car (the development of this new version started in march of this year) uses in the body panels and frame carbon fiber to reduce between 200 and 500kg respect the same car with aluminium body and panels, the comfort and drivability was improved with the use of hydropneumatic active suspension, and the fuel consumption was improved with a new bigger engines (Did someone say downsizing?) available in N/A and turbo (10th rule of Montes: 50% turbo and 50% N/A available engines, if the original car used a N/A engine) combined with a new-brand 8-gear automatic gearbox: the average cruise RPM are <2000RPM.

About the engines, I’m undecided to select the best engine configuration.

These are the options for the normal versions (the MRP engine had 7.3L, and it’s very sportive).

V8 Biturbo 6.3L (more maintenance costs that the 7.3L engine, but had the same power, that the 7.3, and a maximum torque at low rpms, more efficiency, and low rpm (lower than 5600RPM).

The New Excelsior IS A DARN SHARK!

The New Excelsior IS A DARN SHARK!

I will post the rear part of the car (I doesn’t post this when I posted the front car image because I was finishing some details).

The car was designed by my brother.

This is, probably, the biggest engine in a road car of all Automation companies: the 10.250cm^3 v12 for the Excelsior v12 L:

Why I selected this engine for the car?
-High power and torque since low RPM.
-Doesn’t need to rev much to get the maximum power (minor noise, and more comfortable).
-Smoothness.
-And reaches the same efficiency that a smaller V12 (27% of efficiency), and all sliders are set to 0.

All cars that isn’t a sportscar/supercar/hypercar had a MRP version (the MRP or Montes Racing Performance models are the most sportive cars of the brand). 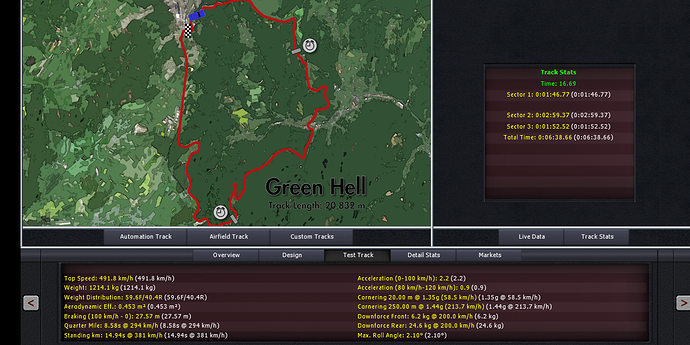 Well, I have inf on emissions pretty much on pre-1975 cars, so

Well, I have inf on emissions pretty much on pre-1975 cars, so

Due ThE leaded fuel.

But in a stat…

How did you manage that?

Also, what is your MRSP of the hypercar?

[quote=“strop”]How did you manage that?

Also, what is your MRSP of the hypercar?[/quote]
Awd,.

And, the score is 0, because this is a prototype.

This engines are based in the old Urban 2.0 DiSi engine, but features an AlSi block and head.

Feel the smoothness and responsiveness!