1982 Gavril Barstow/Bridgell Omnibus. This car was sold in Gasmea and Fruinia with this respective names. A small coupe with a 2.2 Turbo engine trying to revive an old muscle car image. 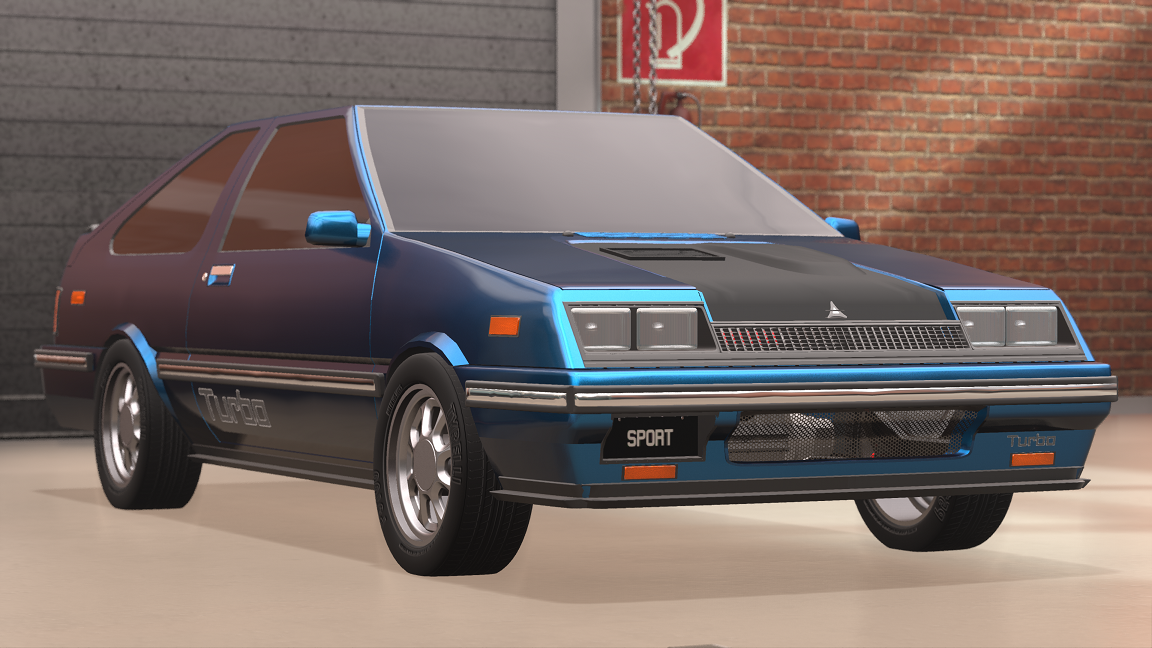 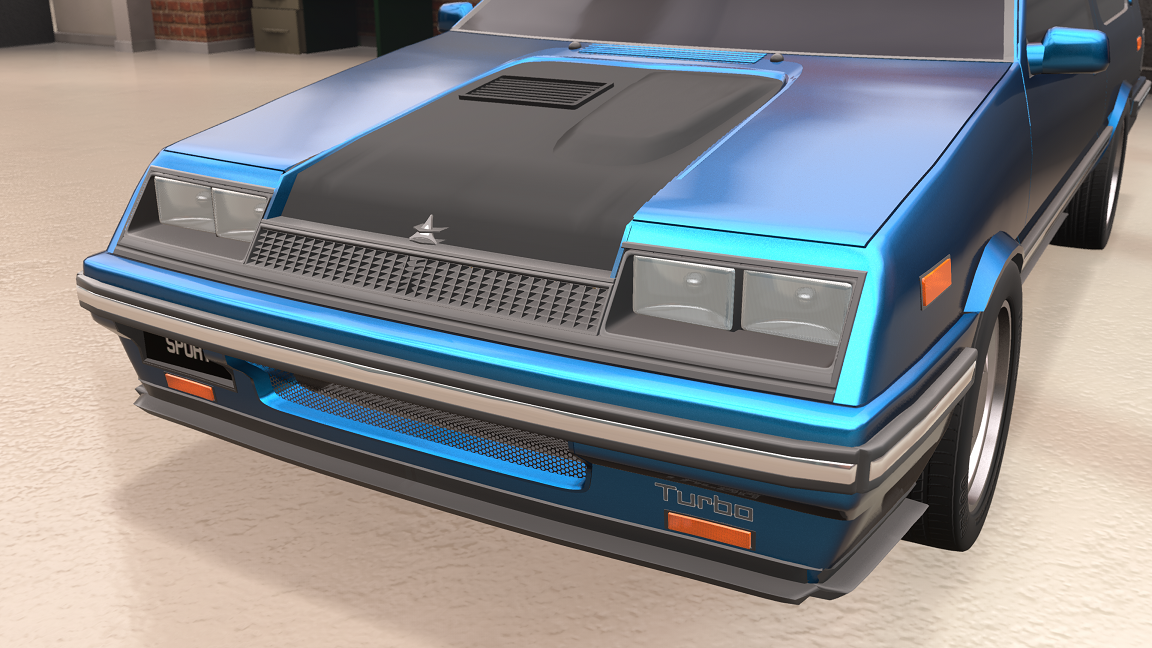 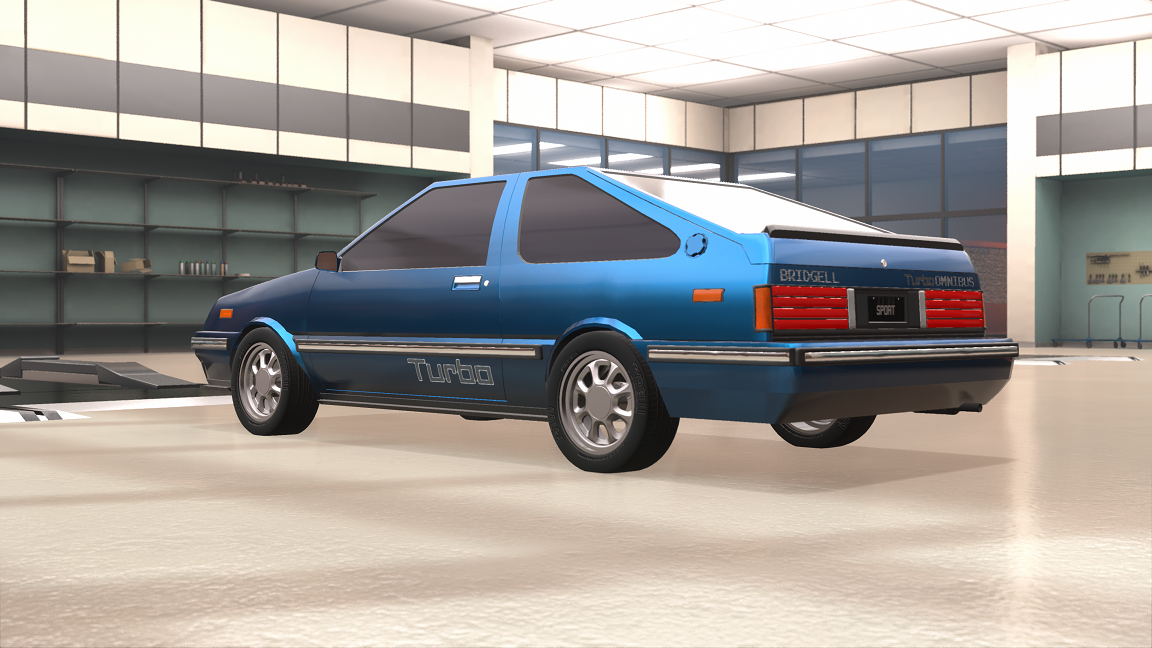 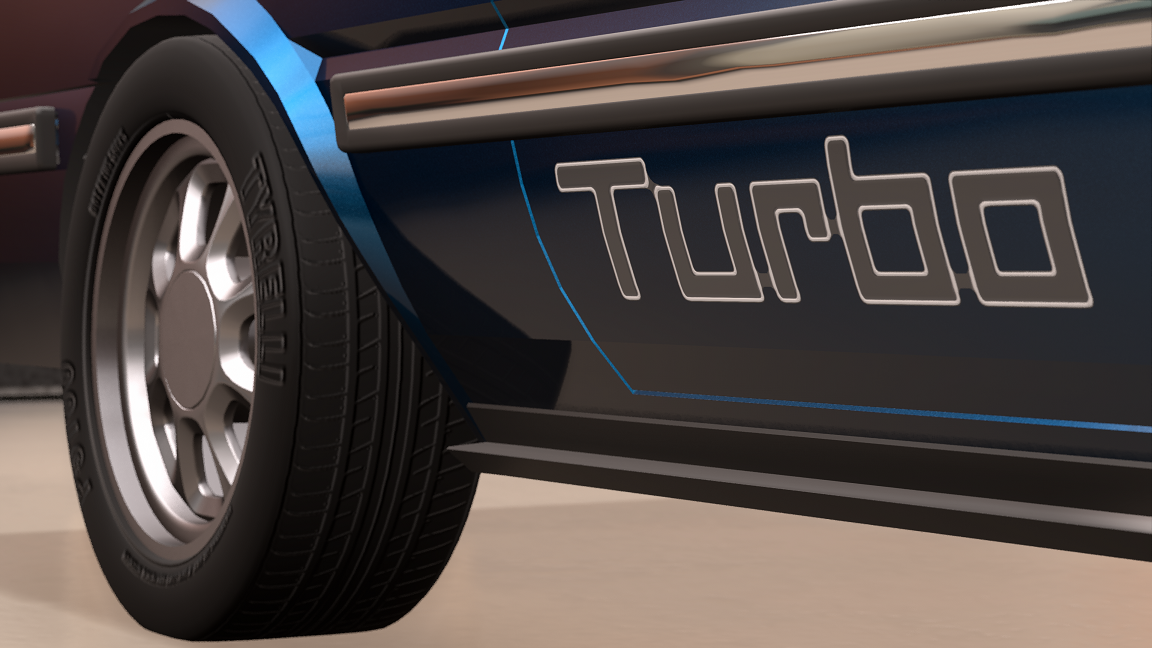 @Obfuscious version of this car made me realize how wrong I’ve done the suspension on this one. Here’s a corrected version:

In 1994, Shimutshibu (The same manufacturer that we worked for on the Enula Mocca project) desired to have a revival at the light, FR, 2 seater sports car market. After a year of hard work, the Apex was released. A kei car, respecting all the regulations, and still delivering old school driving emotion through a turbo 660cc engine, coupled with a manual gearbox, a rare sight on the kei marked, and RWD. Great suspension dynamics, and a open top as standart, with a long hoof coupe optional. There was also a Klassik version, that had the same powertrain, but with looks straight from the 60’s. This version was loved by woman and older people, who would like to have a classic car, without the trouble of maintaining a classic car. It’s still a very sought after used car, and frequently seen on track days.

This is a Apex sports coupe witch was prepared for track days, receiving a V8 made from 2 superbike engines. A wild beast on the track!

Have you ever seen a car entirely based on a musical style. The Synthwave is a electronic music style more focused on the melody, low tone beats and great highway tracks. It was heavly influenced by the game Outrun’s songs. This car reflects the neon heavy, purple abusing ode to the road that this songs are all about. It packs a Twin Turbo V12 engine on a custom tube frame chassis, the best that the 80’s and 90’s could offer.

The MV Design Amethist is a family car sold in Brazil from 1971 to 1992 in 3 generations. This 2 are the coupe and wagon from the second generation.

The Tommy Kaira ZZ-II was a japanese sports car prototype, using the engine of a then brand new Nissan Skyline GT-R, mounted transversally on the rear, mated with a manual gearbox and AWD. This car isn’t it. This is the MV Design FS-I. Witch mechanically it’s the same thing. But a stunning new body was made for it.

The Synthwaver looks as bonkers as any late 80s supercar ought to be, and the huge jet pack in the back is just icing on the cake!

As for the FS-I, it definitely looks (and ought to feel) just like an early 00s lightweight sports car should, especially in metallic blue.

Thanks for the kind words. The blue on the FS-I is called Dockside Blue, and yes you know from where I took this name. Feel free to experiment both:

The Nimber was an sucessfull attempt on the small fun car market. It’s simple design and ease to produce made it a very sucessful model. Unfortunally, bad administration made the model go from one manufacture to another at least 4 times during the “classic” era of the model, ranging from 1962 to 1999. The legendary “Lamp” inline four was released at a puny 975 cc on the first nimbers, receiving longer conrods and crankshafts, going all the way to 1400 cc on the last classic models, and receiving a redesign with a modern head for another 20+ years of production, with 1700 cc on the current Nimber.

1982 1300 model, with a revised appearance outside our studio, good receiving at the time, but obviously didn’t got older as good as the other models. Common classic conversion target.

1992 1400 EFI model. Received a redesign inspired by the lassic ones, but the engine now had some electronic wizardy mandatory at the time.

2012 Newer Nimber. Yes, they had the guts to release a car with this name. Now with a 1700 cc, this model is the current produced one. A new generation is speculated to be released in 2022.

If the Synthwaver is supposed to be an 80s supercar, then why on earth are the model, trim, family and variant years all set to 1994? I’m assuming it was the only way you could reach the desired levels of performance, with or without quality spam - doing so with all four years set to 1986 would have been much more difficult, if not impossible.

2 Versions of the Flatt, a wagon and a pickup (with a chrome wrap)

MV Design Furrano - This car was made to be a previous version from the Furrano that appears in SLRR. Rear Longitudinal V10.

I’m editing my previous posts to include the car files. Have fun!

MV Design 432 - Obvious S30 replica. But I’ve based it on the american 260Z instead of the more common 240Z replicas. Also a custom version is included, with a NA version of the famous MV26DET engine found on the FS-I and Elegy.

This is the secret A/FX version of the Badge. It was sold only by select dealerships with envolvement with drag racing, on primer only, and with no warranty. It’s impossible to find one nowadays, since all have been brought to become drag racing cars, and most have been totalled on track.

(And for some reason the game don’t want to save the .car file)

By Badge, do you mean the Hauler’s Badge from SLRR?

Presenting the 1989 Annis Elegy GT. A versatile and great handling sports coupe powered by the legendary MV26DET engine, pumping 276hp though all the wheels.And all that greatness for less than 20k!