Yours looks really good too. Had to cheat and use a molding to hide the top part of the grille and headlights, so seen how you used the same space is pretty interesting. And I really like this lineup modernization projects, remembers me of my Nimber. I couldn’t possibly seen yours before, I’m just back of being 1 year abscent from the game and forum, so it’s purelly coincidence.

Yes I know, I just used some precautions because many people say such things just to accuse other for stealing things. I remember that I got accused for stealing when I did a mod for GTA 1 many years ago, the only similarity I saw was that both cars were green…

Didn’t even knew modding GTA I was a thing! Nice one. I was probably designing paintjobs for NFSU and daytona usa around the same period. Good times.

Decided to do something easy to relax and hone my skills a little. Remade the S30 replica. This is the base of the basest, '69 single carb, 4 speed, light cream, not even with hubcaps version. Nice evolution in resources from the game, came out pretty good.

Here’s the ruined 1973 American version. Dual carbs, a little more power to be negated by the now 3 speed automatic, higher, softer suspension and heavier bumpers so it can be less stable on the active safety aspect (handling), ugly hubcaps to protect your shitty steelies, and 1000 holes drilled on the sides to slap a chrome trim and rear side markers because somehow parking dents sucks more than this. Oh, and uglier side mirrors. Goddammit!

I wish I had seen that cursive font when I was doing the Fairlady logos on the Japanese car.

A friend from the reddit page asked me to do a replica of the '70 Fairlady Z 432 that appears in the game Sega GT 2002. Might as well!
This one made me wish we could swap body materials betwheen variants, this car had a lighter body due to the use of a frp hood, and thinner metal on the fenders, doors and rear tailgate.

And for closing the arc before I go to the next thing, here’s a 1978 Datsun 280Z. Goddamit american government and Nissan branch. At least it has an L28 with a 5 speed.

Made a replica of this mini '69 Nova that’s made from plywood and fiberglass over a tube frame with a Kawazaki Ninja engine.

I’m back at revamping SLRR cars. This is the Ishima Enula, in the base WRY version. I know, hard to be that plain. Will get better, I promise. This have a frankenstain engine, it’s a I4 like the game, but I’ve used Impreza specs the best I could. In this case it’s a 1.6l engine.

Now for the mid trim, the WRZ. Now this looks like a proper sports car, doesn’t it? And still shows the familiarity with the base version. Wider fenders, sportier bumpers, a wing and a hood scoop, and some mags. Oh, and some more CCs under the hood! This one have a 2.0l engine.

Now for the top of the line, all out racing car for the street, WR Superturizmo. This WRZ on steroids packs a 2.3 turbo engine, bespoke AWD, and heavily tuned suspension!

Photo69.jpg1920x1080 498 KB
( The rear plate surround is black like the rest of the bumper. It’s showing up blue on photoscene for some reason.)

Car lot screen. Made this to be the first pic of each car, before noticing that the next car showed up on each pic, and that I’ve inverted the names.

Teaser shot of the Superturizmo for reddit, because the rear logo didn’t showed up on the other pics.

So, witch one will you take home?

Keeping up with the Haulers Badge lineup. The 1968 model marked the split of the line, with the Badge nameplate being applied only to the coupe. Also a tech inovation was experimented in this year only, and turned out to be too expensive and not developed enough. The car had a rear independent suspension. The two versions available were the standard, bringing yards of chrome trim and comfort, powered by the same small block 5700 V8 from previous years, making 216 hp.

And the H/R, powered by a big block Haulers 7476 V8 making 333 hp, and all the sport accessories you’d expect from a top tier muscle car.

In January 2020, an old and rusty '68 H/R was modified for an upcoming TV show about a trio of otakus trying to survive a zombie apocalypse. Then the real 2020 apocalypse came about and the show was canceled. Still it turned out a pretty interesting car!

Disclaimer:
I’ve made this car before having the mods installed, so it’s all vanilla fixtures, besides the external gauges from the H/R, wich was shitty. The original one can be seen in the apocalypse car. Also, I’ll not be making the '69-'70 until we have a body closely reassembling the '69 Charger, as it’s what the SL version is based, even though the game calls it a '67.

1979 - Juavos, Garcia’s capital. MV Design’s and Duhen Co. JP’s personnel were present at a series of meetings that would define who would be the new provider of niche off-road cars for the island, parting with Garcia’s stronghold brand, Bogliq. The prototype sent for evaluation was a lengthened and widened Duhen Shonen, a Kei offroader with some years on the Japanese market as a more capable alternative to the Duhen Shota Kei van. That was also when the Peak version was born, the choice version for exporting to foreign markets. The car would be powered by a retuned Bogliq 1400cc boxer 4, though their proprietary 5-speed gearbox and 4wd system. 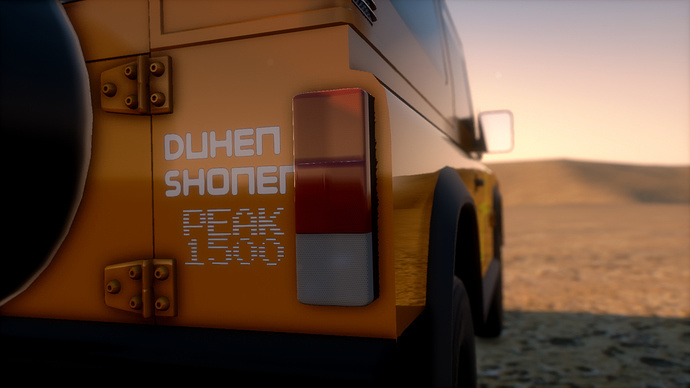 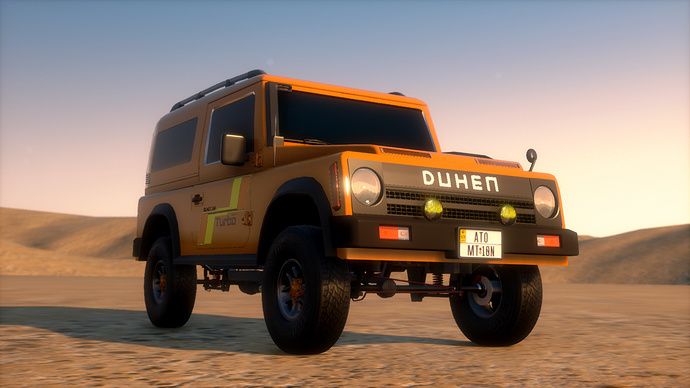 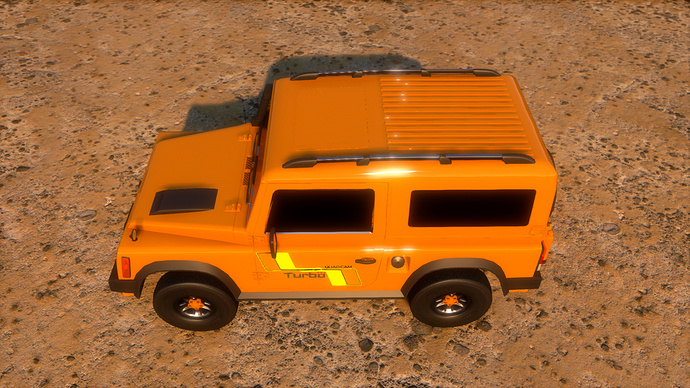 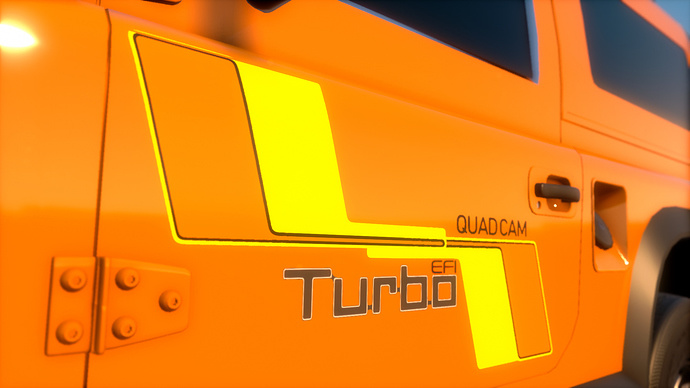 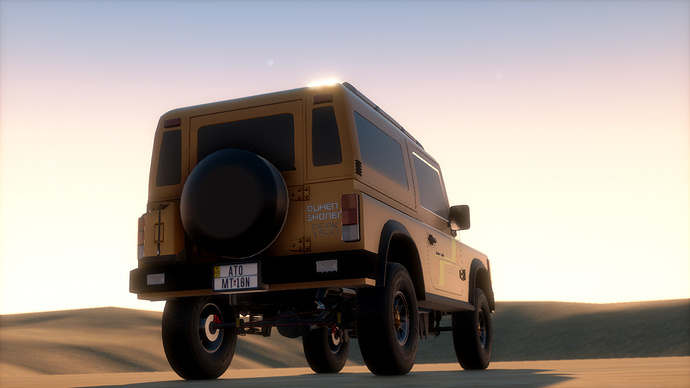 In one of those meetings, an agreement between Bogliq, MV Design, and later Bridgell started to be developed. Since last year, Bogliq had been importing a small sports car to the island, called Buccanneer. It wasn’t being the sales success expected by the company, so a facelift and more powerful engines were being developed to be released next year. A mutual interest in making an unforgettable, high-performance version of the car was found, and after some months of development, a new body kit, suspension tune, and upgrades on their new V6 engine transformed it into the absolutely bonkers MVD-SPV 838SVP, or Buccanneer Stage 1 for short. 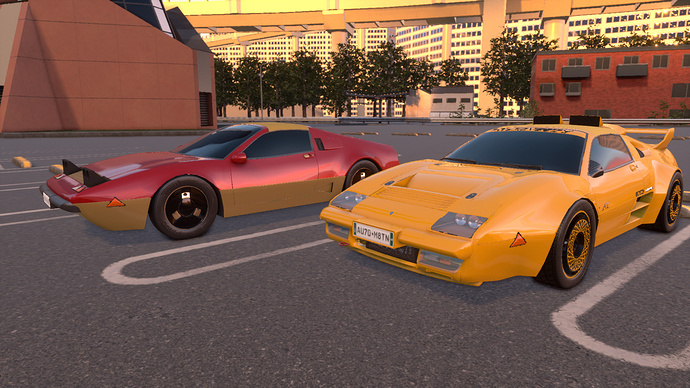 This car was produced by request, with no limited numbers. But to staple the nameplate on the books of automotive history forever, a limited, hand-built DAOHC Twin Turbo V6 powered, MVD-SPV 841R, or Stage 2, was produced. This car was so wild and untamed, that the purchase price included a driving course to learn to tame the beast. 800 cars were produced to be sold by Bogliq, with custom numbered plates USA-000 to USA-800, and a further 80, UK-00 to UK-80 right-hand drive cars to be sold by Bridgell in England, along with the Stage 1 RHD cars ordered though Bridgell dealerships. 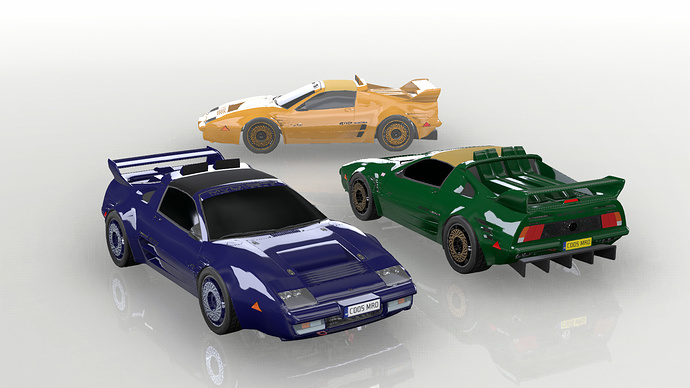 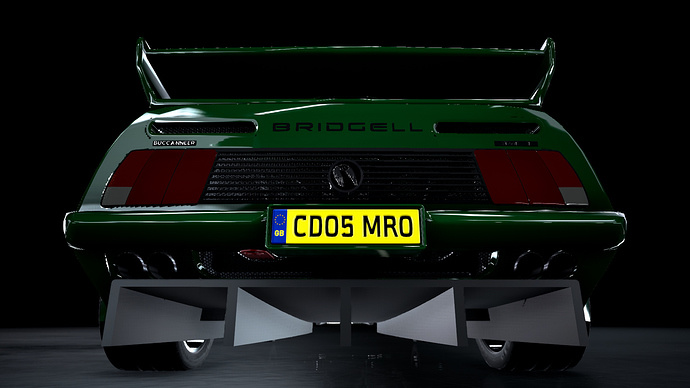 This also opened the UK market to receive the RHD rebadged standard V6 variants, starting in 1980.

Made this thing for CSR126. Just realized I haven’t posted it here.

1965 Nissan R380-II. High revving I6 sounding as awesome as it looks. I love when all the specs of a rare car are online so the replica drives as accurate as possible.

We have nothing to hide. We show you the good, the bad, and, well…

Very fitting for the late 80s, feels like kind of a Mazda 626/Ford Scorpio/Rover 800 hybrid with some own ideas.

I’ve used ideas from at least 6 cars on this one, only the Scorpio was one of them. The whole car is loosely based on a Ford Versalles. It’s a car built in partnership with VW. The body is a Santana with a new front and rear, and the engine was a VW “AP” I4. My car have some American flavor thrown over it, for more cohesion with the challenge.

So, I saw this mid engined C2 and tried to imagine how would it be if it wasn’t a custom, but had came out like this.

Initially, I made it using the exact specs from the real one, but the deadly oversteer made me go to wider radial tires. Only driveable on a wheel due to still having wild oversteer, and it’s probably one of the ugliest cars I’ve ever done.