i will point out you showed me, in order, a fire engine, a not particularly well made truck, a campervan, and a truck from 45 years before, not 5-10

Note that you can turn these bodies into something that looks futuristic, it was done with the “90’s” lorry cab body multiple times. just sort by truck and Van and go from there.

Also another question for @Fletchyboy100
Is there Trim and ET restrictions?

No PU & ET restrictions, no. For the small price of $4,500,000 (yes, you read that right) you have access to the two greatest utility vehicles ever made. Made specifically for fitting into the specific client’s needs, who apparently don’t care about things like safety or having a price cap.

Because, here at MEN, we cater to any and all client needs, even the seemingly ridiculous and not thought through very well.

3 more days for entries. We need more than 2

1999 Franklin Marshall CarGo and InterContinental. You’ll get change from $49,000…which we think is a little cheaper than some of the competition!

The Yama Mori was an utility truck developed by Suisei to fulfill a military contact during the period where the JSDF started refitting their military vehicles, such vehicles as the Yama Sharyō, Toyota Megacuriser and the Type 90. With this at hand, Suisei converted the Yama Mori for the civilian market, stripping it off its military modification such as bullet prove glass and replacing the stripped interior with standard creature comforts.

The vehicle saw succeful gains over Asia as a multipurpose trucks been used in both civlian and military forms. This is partially due to its 10 ton capacity and 2.3 ton towing capabilities by two options, a 8.1L Turbo engine and a diesel variant. The truck saw production as late as 2005 with a minor face lift in 2000. It was later succeded by a newer model. 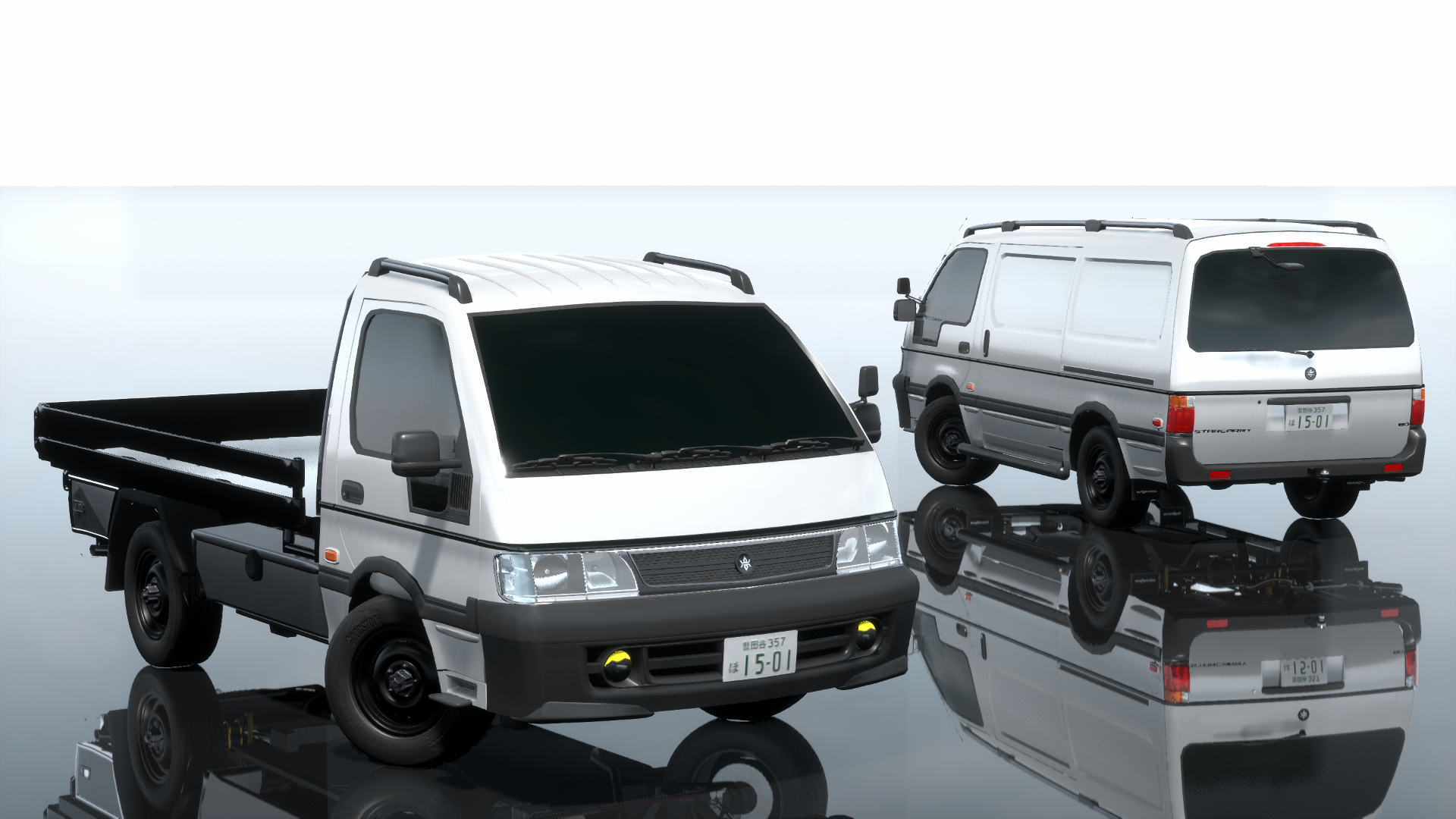 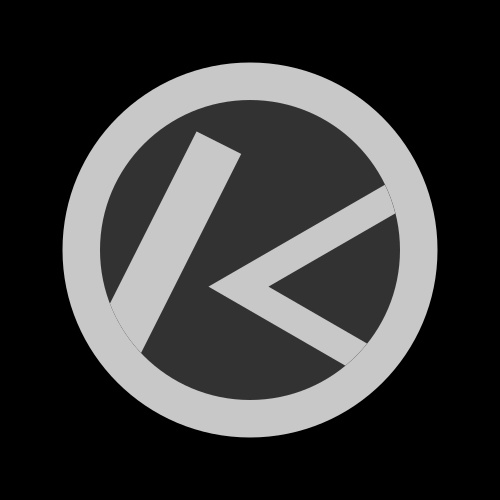 New for 2004,
From its Jino line of heavy vehicles… 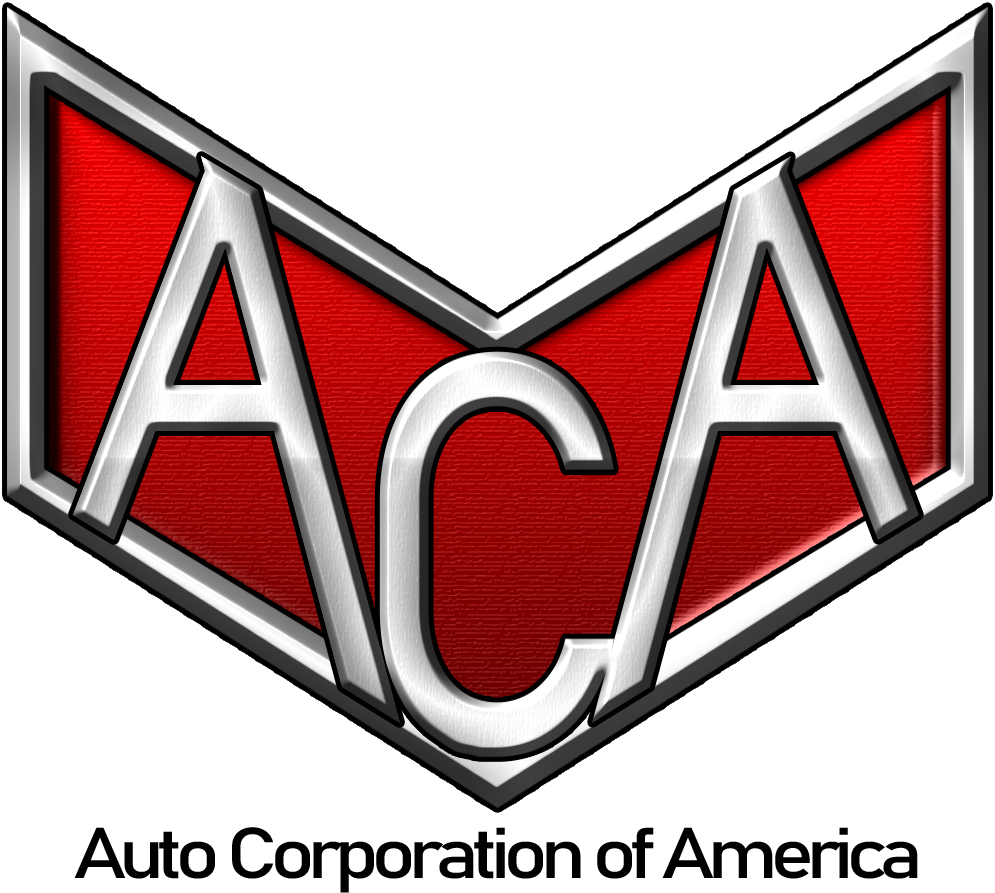 Developed in 1987 as a medium sized truck, the Meteora was designed to be very modular. With a wide assortment of engine options as well as layouts, the Meteora was even used as the base for many military vehicles as well as the widely known, MEN CRAP. The most popular engine choice for the Meteora was the 8L ACA DynaTorc Diesel, which made 355hp and over 800Nm of torque.

The 4th Gen ACA EcoFlow van was released in 1995, replacing the ageing 3th Gen EcoFlow. The 4th Gen came with a new sleek body, designed to increase fuel economy. The old ACA 440s and 350 V8s that were used in the 3rd Gen would be replaced with new more economical engine choices such as the new ACA DynaTorc V8, specifically designed with fuel injection.

It’s a truck, it’s small, it’s ABSOLUTELY AWFUL! The Daesan Power Traggio is Powerfully Tragic™ with its 2.5 NA diesel engine making heck all power, all while handling bumps like a drunken donkey high on testosterone and steroids.

The year is 1995, and the Chelaransk Avto Zavod has recently injected some life into the old 5500x Series of trucks: You want a regular chassis truck to customize to your whims? The 5500x series of modular trucks would be right up your alley, as the several versions are tailored to suit needs of different customers

Pictured above is the previous gen 1976 Chelaransk 55002, a tanker truck that can be configured to several pipe and valve variations.

Above is the updated 1995 Chelaransk 55001, the upgrade all-purpose chassis cab modular truck. The rear section can hold up to 2 tons of cargo and easily haul it around with the 150hp inline 6 engine.

Prices start at $15300 US dollars, with a 5 speed manual gearbox and standard AM/FM radio cassette unit.

There is a fleet discount available if you order 15+ trucks, so please consult with an official importer/retailer as soon as possible and recieve a 7% discount upon purchasing 10, and etc.

With less than 24hrs left:

Keep the entries coming in!

These modules are examples of the modularity of the truck, and can be interchanged or even custom made for certain customers.

(Disclaimer: It’s obviously not one whole vehicle, this modular example was made for display in this challenge but it would work like this in reality.)

Some things just have to be delivered in style. 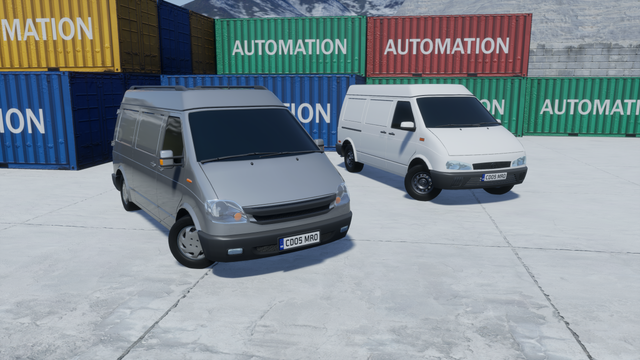 Miku needed a successor to their aging Express (van on the right) so they developed a new van. This new van was going to be the next generation of vans for the 2000s. It was going to be far more economical than its predecessor with a 2.0 direct injected inline 4 compared to the much older 2.5 multipoint V8.

It is available in a variety of variants such as:

Heavy Duty spec - more powerful 2.5 inline 4 and toughened suspension designed for heavy duty applications such as heavy loads and towing. Was available on all body types.

Passenger spec - A more comfortable model with more technology and features designed for passengers in mind. Available on the minibus body type.

Light Duty spec (pictured) - Designed for the casual van loads and deliveries around town. Available on all body types.

Miku sold the van in a variety of body types and could even special order vans for specific purposes such as camper vans, cargo vans etc.

Let’s Start With Being Harsh Shall We?

Beginning with the trucks
Clearly, the chairman has stepped on some lego, as his face looks like a bag of nails.
Either that or Waitrose didn’t have any Caviar Pasta or whatever the hell they sell there.

Chairman: Now… a truck.
It has the expression of someone who’s walked in on their other half in bed with another man. I do like the red with the yellow pinstriping though.
I’ve been told some interesting things about this though.
This thing… if I even call it that, has Billet Internals. While on my Ferrari, something like that wouldn’t be uncommon, on an 18 Tonner, nah. Same with the steering, it’s like something you’d find on a BMW M5. Unless we hire Martin Brundle as a driver, this’ll just be wasted.

Binned for questionable engineering choices, a look only a mother could love and low reliability.

@DoctorNarfy - MEN MEGACRAP
Chairman: Now this is a proper truck. Big. Beefy. Phwoar.
It’s everything we want and more! Shame it takes 79 days to build 1, and costs £2,000,000.
It’s MEN, so if we try and haggle, some big blokes with AK47s will turn up and steal my kids.
I know we didn’t set a cap, but that’s taking the piss a bit. Next please.

@Falling_Comet - Yama Mori G6
Chairman: Another Beefy Boy I see.
This big boy is a bit too much of a flatbed, we might have to see if we can get it rebodied, but this certainly gives us road presence. It isn’t too bad at all - except fuel economy… but it’s good elsewhere.

Your carriage awaits (to the final)

@TheTechnoVampire - Kazuki Jino Great Master
I feel sorry for this truck, because some stats are a bit broken… this means it gets the benefit of the doubt at some points.
Chairman: It is very poor on fuel economy, but this is realistically poor as it’s a literal artic wagon.
It also has a striking look, that will definitely stand out. It has some good safety features, like the cab window in the foot well, so you can see the cyclist you are about to run over chuckles.

Through on BoD from the broken stats, and the fact that trailers aren’t simulated - altering the stats.

@Tzuyu_main & @That-S-cop - Seikatsu Megacarry
Chairman: When we said lorry or truck… we didn’t mean something like a Toyota Hi-Ace…
I suppose as an Urban Artic it could work, but would it be good enough? Well all the stats in the bumf seem to be promising, very frugal, quit handsome, while still utilitarian. I actually quite like it.

Have a pass through to the finals, good sirs/madams (Seriously, I don’t wanna discriminate. The truck could be female too)

@Executive - Chelaransk 55001
Chairman: It’s like I’m back in the 70s? What is this thing?
I mean I know it’s Eastern Bloc level, and it’s modular, and that’s cool and that, but holy shit, it’s older than my Great Nan! For it’s size, the fuel economy is shocking!
We wanted a unique look, but looking like we’re fresh outta 1972 isn’t what we want! We’re past the corduroy era, we have small mobile phones, we have big TVs!

I actually quite like it, but it just doesn’t cut it. Too dated, too thirsty for its size.

@Dorifto_Dorito - ACA Meteora Flatbed 44
Chairman: Again, a flatbed, what is it with people wanting our parcels stolen from the trucks!?
A bit too American for my liking, and a bit impractical on the utility front, and a bit heavy on the old reliability.
Not much else to say other than STOP TRYING TO MAKE A GREAT TRAIN ROBBERY WITH OUR TRUCKS thank you.

Too American, a bit dated and comparatively unreliable.

@Keikyun - Daesan Power Traggio
Chairman: Oh god, no, not another one? Are you for real?
It looks like a bloated Subaru Impreza, and I kinda like it.
Why oh why oh why, though, is it a sodding flatbed?
Not bad on fuel economy, and fairly good stats all round for its size.
You’re through. 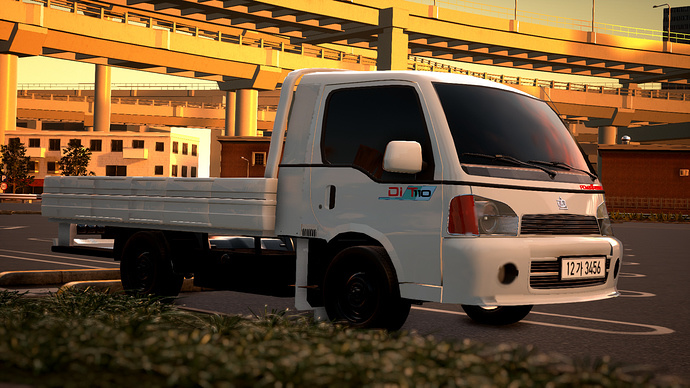 Morphs reset on the rear of the van so I have to use this screenshot. Either way well done.

The Japanese cabover is through!

Yeah, Automation stat calculations don’t really work in my truck’s favour, leading to some being slightly broken. That is the limit of the game after all as it’s not made for such large vehicles.

I would also like to state something about the naming of the truck: Jino is NOT the model the name. It is a sub-brand, just like how Mitsubishi Fuso is a sub-brand of Mitsubishi. The actual model name is Great Master.

I expected as much to come out my dated truck