Photo43.jpg1920x1080 270 KB
Trident Raven 2500RR in Deep emerald Green. This car has a rather odd historywith the raven being a car available to the public since 1969. But due to its rather odd engine didnt find many buyers until this last-resort stripped out model came along in 1972. due to its stripped out Racing like interior , its easily tuneable and Almost bullet proof engine the RR model (which is not designated on the model directly for discretions sake but is shown by the stripped out bare bones interior and front chin spoiler of sorts) was popular with people wanting to experience the stripped out racing feel of such a car but without the cash to modify a car specially or afford a more highly sprung and delicate car. It was also popular with the ameteur racing scene prompting the company to invest in this particular car to go racing in. This model is the racing version of the EARLY 1974 revision with Front and rear disc breaks but without the Enigma 2 and later 3’s more suitable double wishbone suspension layout as to modify it so would have been prohibitabely costly due to the standard cars lackluster sales even though the raven used a cut down version of the enigma 2’s floorpan with an 86 inch (approx) wheelbase, albiet with the compromised macpherson strut and semi trailing arm suspension developed , engineered when the DWB system proved too costly to engineer properly for the rather oddball engine. (Tridents’ very short lived FireStar5 engine which while reliable was seen by all involved in development as a bit of a rush job and compromise due to the ravens tight engine bay not allowing for a proper arrangement of cylinders such as an I6 which is Tridents’ Preferred choice for most sports cars). Fun Fact: This particular car, modified for use in the D.E.C.O.Y 1974 was originally slated for the use of a 3500cc V8 Producing somewhere in the range of around 180bhp but the regulations and time forced them to use a revision of the standard cars 5 cylinder power unit producing a decent but not stellar 140bhp
Slyo_vom_Pluto 2020-03-04 19:57:38 UTC #64

In a small factory just north of Madrid...

The commisioner Mr. B. himself is nowhere to be found. However, the cars are already processed by the drivers and engineers on site. Mr B’s assistant secretary, Mrs. von P. writes the report…

This is Mrs. von P. writing about the commision for the D.E.C.O.Y. car.
The staff has tested the 14 entrys and given their opinion on the cars.
Please have a look at them.

I have sorted them from least to most recommendable in ascending order for you.

Photo88.jpg1920x1080 534 KB
First off we have a car that, whilst performing average, is just too expensive. Monocoque chassis, forged pistons in an i6, 5 speed transmission and hydraulic steerring assist just is too much than what was commisioned. Maybe with a nicer interior and styling it would make for a good premium sports car. Note: Very nice colour 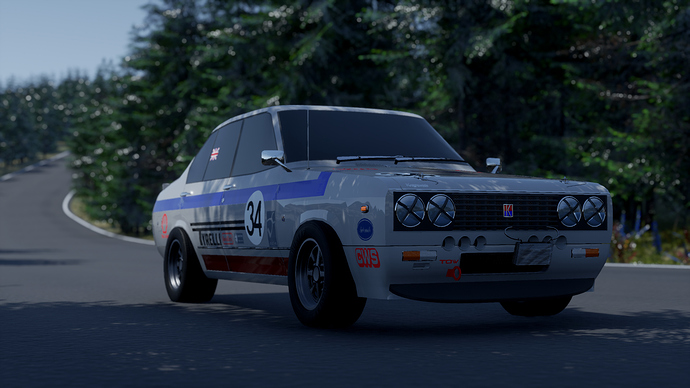 The first car that came with decals pre-installed, this one too has a very strong i4, but this time the costs mount in the internals. The engineers say, it’s easy to work on, but the standard is just too high. The drivers say it doesn’t feel sporty to drive either. It has some highly detailed, if unassuming styling. But sadly that doesn’t make it any cheaper.

Photo89.jpg1920x1080 487 KB
Next is a simiar car, powered by a (pushrod?) v6 in the rear. Again, all around solid discs, fancy pistons and oversized carburators make this car better than the first, but just too expensive for the performance. Also the engineers have assured me that the haphazardly tacked on vents are just not nessecary for the engine.

Photo91.jpg1920x1080 460 KB
This one came in very early, so the slight overengineering is forgivable. It also carme with a rear bench seat and a cosmetic tow hitch pre-installed, strongly advocating for a more street-oriented use. Everything else is just… kind of regular. It handles solid, has a solid i4, solid discs in front… If the slightly improved rado communications are the most outstanding thing about the car, it should illustrate, just how regular it is. Note: Drivers want to keep it for the weekends.

Photo90.jpg1920x1080 513 KB
The second car with racing decals, again, no one is quite sure, where the costs are coming from. The engineers guess it might be a combination of the high quality pad type on the drum brakes, a tightly fit v6 and possibly the unconventional body. Nevertheless, the drivers report a very sporty and drivable FWD car, a shame that it is just too expensive. It looked so good, too.

Photo94.jpg1920x1080 544 KB
It’s hideous. The dated i4 is tuned to tear itself apart, which makes for a very sporty, but relatively unreliable car. The chassis is more regular, the tires really just look very big on the car, but… I’m sorry to break character, but the gold and blue metallic paint and overload of decals and fixtures just bombs the score.

Photo93.jpg1920x1080 470 KB
The complete opposite of the leading car, this little fella is actually quite cute. It has an appropriately small rear b4, of which the engineers are unsure, if the double exhaust is just there because there isn’t enough space in the space frame to join them. Sadly, the drivers are appauled by the terminal oversteer, which makes it rather difficult do drive. Note: One of the engineers suggests less camber in the front and wider rear tires.

Photo92.jpg1920x1080 442 KB
The only (?) entry with a wagon body, this car is also be best looking car in my humble opinion. However, on the technical side of things it is less than optimal. Tortion beam rear suspention and a very flat power curve on the i4make it exceptionally easy to drive, and it is the cheapest entry, too. The drivers are complaining about a strong lack of sportiness, though.

Note: The next 5 cars are very closely contested

Photo99.jpg1920x1080 336 KB
There are a lot of things this car does very well; The drivers report the most sporty car and the engineers a very reliable one. However, the v6 is very lethargic and thirsty. This would all have been forgivable, if there wasn’t the design. It would have fared a lot better, if the designers would have taken more traditional inspiration.

Photo96.jpg1920x1080 503 KB
A straight improvement over the other rally car, this one is a marginally more expensive (aluminium i4), but avoids being entirely boring to drive. It still looks the part, too. The drivers report a very well handling car, the engineers question if the unconventionally bigger front tires and weird aerodynamics are worth it for the RWD car.

Photo97.jpg1920x1080 531 KB
Entirely gorgeous, this is maybe the best street-oriented car in the lineup. A well mannered v6, advanced suspension, the only thing this car is lacking dearly in is sportiness. I would re-examine the car for use on the commertal market, the engineers told me it for some reason had galvanised steel panels. Note: And shorten the name.

Photo95.jpg1920x1080 528 KB
If we were looking for a sole track car, this would, without a doubt, be it. The strong pushrod v6, proven body and even a differential make the engineers drool over it like an american pony car. The drivers report only a minor issue; It is very track oriented, but that comes at the cost of being noticably less fun to drive.

Photo98.jpg1920x1080 433 KB
Both drivers and engineers recommend this one. It came in almost late from great britain, they didn’t even bother swapping the plates. Or the Paint for that matter, which is the only thing that could be critizised on this car. A slightly older design too, it is very similar to the leading car, but this time it actually is decent to drive. The strong i5 is well mannered and paired with a good suspension. From an commercial viewpoint too, this is exactly what was commisioned: A sporty but drivable, cheap but reliable car. Note: Seriously, just change the colour. Maybe the one from the first car?

Photo100.jpg1920x1080 444 KB
Umm… I’m teribly sorry to bother you with this one, but it seems like someone stole a german scientist to build the fuel system for him. The engineers don’t want to touch it. Mechanically, it is the best car, but it just is unreasonable in both developement and styling, if you can even call it that.

Thank you to everybody who entered for their cars and patience, as well as @Petakabras and @Jaimz, again :3

so… when are the results ?

The results got murdered. The edit log for “just a second” says so.

yes, the results got ‘murdered’
I did a little copy paste spoof, not to worry, everything is fine
also congrats 89845524

WOW. i WON? This is a surprise. I wasnt expecting it to win AT ALL. I spent quite alot of time on it true but i was expecting its engine and dull looks to come under fire. Admittedly i chose the paint because it looks nice on the car if a bit awkward in the era.

Fair judging I think. Not sure where the costs came from either but I knew the car was solid.

Correction : I will NOT be able to Host the Next Round Due to Personal Issues and My Obligations as a carer for my father, Therefore i Pass on the round to @GassTiresandOil Although I would be happy to assist him in the round in any way i can.

Top half, nice. I’m never very good at design so I’m not surprised that was a downside, and on the internals I seemed to deliver, even if what I delivered was more on the aggressively racy side.

Congratulations to everyone who came above me, and thank you to @Human89845524 for offering instant clarity on hosting ability. I’m excited to see what kind of challenge @GassTiresandOil produces with your help.

IF @GassTiresandOil is amenable id like to collaborate with this. the main and pretty much the only thing i wont be able to do is the judging and results because busy. Since @Fletchyboy100 is the PDC creator, if he were to do it, he should have full control over it. if that were the case id enter it. (i do have a challenge written up i just need someone else to do the judging and all)

Lol I think I’m in the same position you are. I have a challenge ready to go but I can’t host. I wouldn’t mind doing your challenge, though. But, I just can’t host right now. Would @Fletchyboy100 be able to do it?

I’ve other commitments at this time, so I’d have to pass it down to someone else, since I’m on mobile atm I can’t tag…

Sorry, but I can’t. Holidays are finished. I will be too busy for the next weeks.

While I’ve not hosted anything before, I am willing and believe myself able, plus I have an idea.

Everyone’s got to have a first itme for hosting, and a couple of different people with hosting experience (including PDC founder @Fletchyboy100) have backed me up and answered some questions I had.

I will be spending the weekend getting as ready as I can ever be for a first-time attempt.

IF people are OK with me hosting PDC7, then I am ready to step up, with a thread ETA of Monday afternoon UTC/UK.

Yea! Sixth place. Moving up in these competitions…

wait, I’m kind of confused why the dq?

I get that it’s ugly, I kinda struggle with that body and gave up at some point,
but was there a rule against quality sliders?

Min Max is banned across all challenges, but what level it’s banned at is up to the host, the limit is usually +5/-5 so I’m assuming you were over that.

I had a fairly simple engine with a bunch of ET left over that I dumped into the fuel system.

That’s… a lot of min-maxing. Like Exotics/Supercars get that kinda treatment