It might. But I’m pretty sure that designs which lack enough of those things to make it noticeable are not particularly refined anyway. After some practice there’s no need for a list, it becomes instinctive. A challenge is a good way to practice, but IMO it doesn’t really need a tutorial. Yes, just “US automotive standards” is rather too vague, but I don’t think there’s a need for a full list of every required item, that starts being comical and redundant with “design (…) realism”.

Which is why I listed some basic things I’m looking for in that regard. I didn’t make an exhaustive list on purpose because most people already have some idea of what’s required. I know it’s redundant to do so- and I didn’t need it pointed out

Nah, don’t worry, that was about Marv’s list, yours is fine.

That’s exactly the reason why it is a good idea to add such a list, with the difference in regulations between locations it’s good to know stuff like that. And as I as a European wouldn’t know where to look up US regulations (as I assume it also depends on the State individually), I’d appreciate it if that information is provided when asked for. Especially if it had been asked by more than one person.

After some practice there’s no need for a list, it becomes instinctive.

I beg to differ, as it’s largely depending on era and location. So even though it could be common knowledge for you, another person could not know this.

I meant stuff like wipers, brake, reverse and fog lights, and plates, not anything US specific. Find me a single modern car (with a windscreen) that doesn’t have any wiper, and I’ll admit there’s any need for listing that. As for lights, as long as they can be integrated into the taillights (which those can be) it doesn’t actually matter, almost everyone will just make some red light area, maybe with some unspecified details, and be done with it.

Find me a single modern car (with a windscreen) that doesn’t have any wiper, and I’ll admit there’s any need for listing that.

But I think we are wasting too much time and energy on this. If you don’t need a list, don’t use it. I’m sure there are others who would gladly have a list of mandatory items because they don’t know the 2020 US commercial vehicle regulations inside out.

Tired of your fleet of old, polluting vans? Well relax, because Hinode is here with a solution for your environmental woes.

Introducing the Hinode Microcab, the delivery van of the future. With its 20kWh battery and 95hp motor sending power to all four wheels (FWD models also available), the Microcab can haul up to 760kg of goods up to a distance of 180km in a single charge! In addition, the modest 1,820 litre cargo capacity ensures that you can fill every van to its fullest for almost all deliveries, improving your businesses' efficiency. This, combined its cozy little cabin makes the Microcab perfect not only for urban deliveries, but also for deliveries to distant, far-flung destinations with lower demand. The Microcab is also as reliable, if not more reliable as most vans out there, and can reach most destinations in the US, even if road conditions are bad. The Hinode Microcab, as nimble as it is, will certainly serve your business well.

The new Hinode Microcab. An invaluable addition to every fleet.

I’ve decided to extend the due date for the challenge until Sunday, December 6th, 11:59pm PST to allow for more submissions as there may be people still working on something. That being said, so far I’ve received submissions from:

I present to you the 2020 CESMA Geante ZEV cargo van. It features an aluminum body to improve range and to provide longer service life. Twin electric motors allow for all wheel drive to help ensure your packages arrive safely regardless of the weather. And it has a slightly quirky yet cute design one would expect from the French.

Expect results in the next few days.

Motorpop’s commitment to a green future does not stop at passenger vehicles. Commercial vehicles contribute significantly to pollution, and to solve this, we must tackle the root problem: the powertrain itself. Besides cutting tailpipe emissions, electricity delivers immediate torque, proving beneficial when it comes to transportation. Delivery is an industry where these benefits can be realized, and we would like to help facilitate such a transition.

For those willing to make the jump, we offer the Courier. This sleek brick features unexpected technologies such as hidden door buttons, sliding passenger and cargo doors, and a slide-up rear door. Visibility is bolstered through camera and rear mirrors which, paired with a large windscreen and sensors, grants the driver great visibility. Two motors make up an all-wheel drive system the 130 kWh battery powers, with the motors making 200HP. When charging, the rear top lights brighten sequentially based on how charged the batteries are.

We understand there is some reluctance to ditch the bulletproof engines installed in many delivery vans. To prove new system’s reliability, we enlisted several companies, including PartHub, to test the “boxcar.” Thousands of miles later, barely any issues were reported. One of the boxcars was involved in an accident, but thanks to advanced safety features, the driver was left with just a few bruises.

Keeping this priced at $26,000, we want you to feel good about helping our environment. Plus, 7,020L of cargo space should come in handy when reaping profits.

Looks like we’ve got a clear winner here. My crummy kei van won’t stand a chance against that :(. 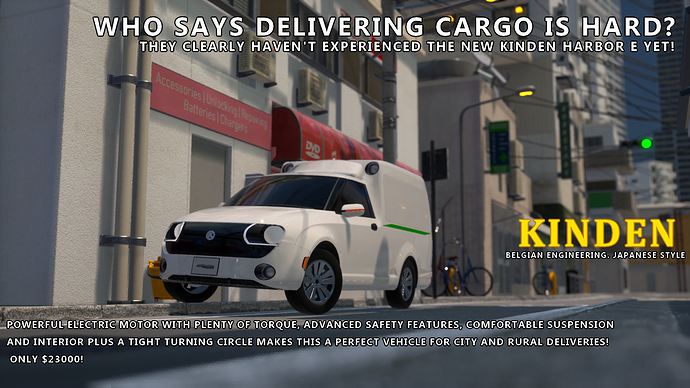 First on the docket for judgement was the Kinden Harbor E. Offering a modern and fun design in a compact body, the Harbor E was a strong place to start. However, during the scrutineering, it was discovered that the Harbor used plain steel panels. Beyond that, it had rather average stats, that all in all led to it’s loss, and was quickly removed from contention.

(Reason for bin: Low environmental resistance, and rather average stats that didn’t make for a great package. That said, I did like the design, and for it’s size it did have a rather substantial cargo capacity, but alas the bad outweighed the good.) 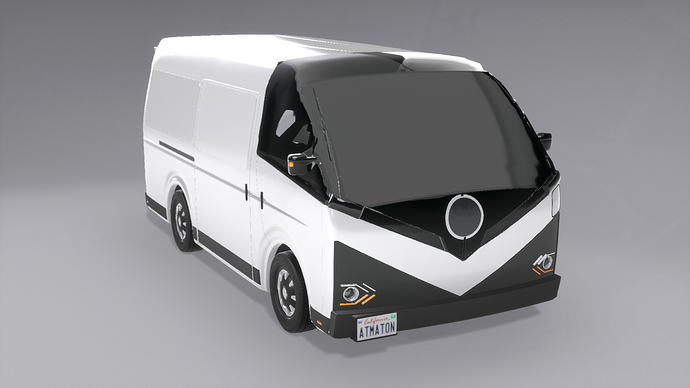 Next up was the Eta EV, by MAHG. At first glance, it was a tempting package, with exceptionally high practicality and utility scores, decent environmental resistance/reliability, as well as the highest cargo capacity out of all of the submissions. The only thing that gave the scrutineering team pause, was the high price of $33,500, and the choice to use rear drum brakes. However, the vast number of positives made it too good to pass up.

The MAHG Eta moves on to final considerations. 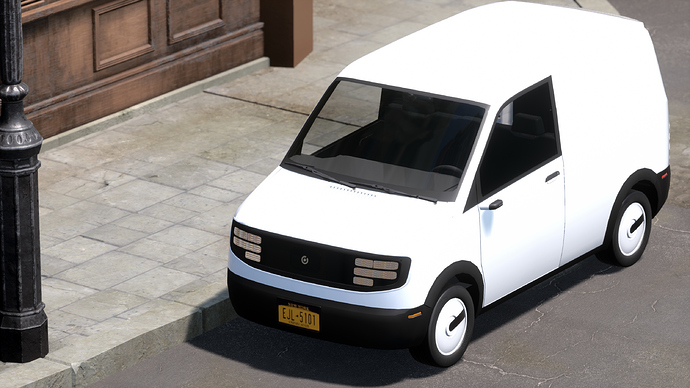 Third up to bat was the Hinode Microcab. Being the smallest out of all vehicles submitted, it posed an interesting package. Upon closer look, it became clear too many corners were cut to reach the lowest price in the competition. It had the lowest safety out of all 5 cars, clearly caused by the choice to use Standard 10s safety. In terms of other stats, it was a mixed bag of low scores, or average that made the Microcab an uncompelling package.

(Reason for bin: lowest safety in the entire competition, and a mix of average and low scores in other areas made for an overall underwhelming vehicle. Beyond that, it has a neat, modern design that I liked quite a bit and a very compelling price, had the stats been better.) 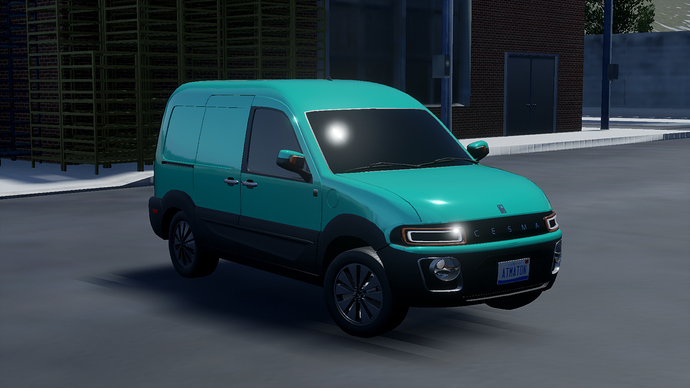 Next up was the Geante ZEV, by CESMA. Being the second most expensive vehicle in the competition at $32,200, it promised decent environmental resistance, low operating costs, and okay stats in most other categories. However, upon closer inspection, the Geante had rather low safety, average cargo capacity, and utility brake fade, that in combination with it’s high price tag made it less worth the money.

(Reason for bin: Low safety, utility brake fade and low cargo capacity in conjunction with a high price removed it from contention. That said, it had the lowest service costs in the entire competition, and decent practicality/utility.) 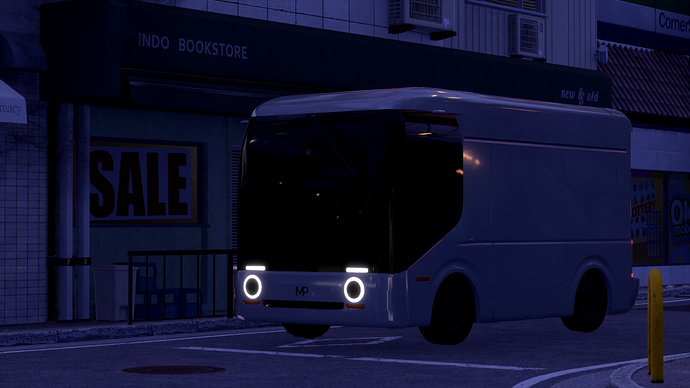 Last up was the Motorpop Courier, which had a… surprising design to say the least, offered the highest practicality and utility score in the competition, decently high cargo capacity, and overall very good stats. However, the main thing that gave the scrutineers pause was the high operating costs, the low safety for it’s size. and low environmental resistance. Looking beyond that however, the low price of $26,000 and very high stats in the areas where it counts most, the Courier was hard to pass up.

The Motorpop Courier moves on to final considerations.

It came down to two, the MAHG Eta, and the Motorpop Courier. Each vehicle had it’s own strengths and weaknesses, but when you get right down to it, there can only be one winner…

Congratulations to everyone who entered, and our winner! This was a fun competition and I hope everyone who entered had fun too. Choosing a winner was definitely a challenge, it came down to a thin margin that ended up handing the advantage to the Motorpop. That being said, there wasn’t a bad car in the competition. Thanks for participating, and see you next round!

Congrats chiefzach! It was certainly a challenging design to come up with. Trying to think what would work best to simulate an EV while using IC components all while staying within the ETs took at bit of thinking.
And I can’t say I’m a huge fan of modern vehicles, but I really liked everyone’s designs.

I was a bit uncertain whether to go with aluminum and FWD or treated steel and AWD, but it seems the latter was the best decision. This was a tricky round to engineer for given the unique requirements, but I feel we had some interesting interpretations such as smaller delivery vehicles over the larger ones in the inspiration dropdown. Thank you for hosting this round, vero!

As for hosting rights, I had an idea in the works and even started on a mule, but it seems the most recent OB patch is causing issues for some people. Due to this, I think it’d be best to wait a bit before saying anything for sure. With that, I’ll admit my schedule for this week and the next are going to be pretty busy, so if I find I don’t have the time to host, I may have to pass to S31.

That being said, great work again! I hope to see y’all in the next one!

After giving Automation a break, I tried building a few mules, but unfortunately, my schedule’s going to be pretty busy. Therefore, I will be passing hosting rights down.

@S31 How do you feel about hosting?

I’ve got some kind of ideas but no time time to put them down, so i’ll pass as well!