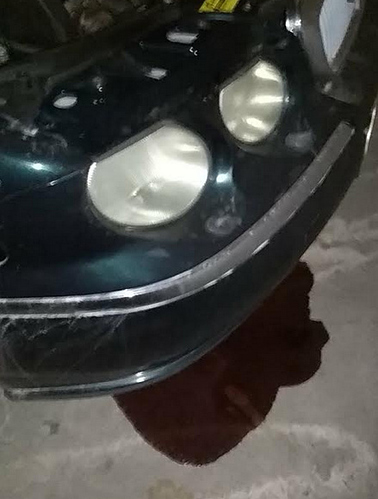 4 months I’ve owned this car and managed absolutely 0 issues and no problems starting in the cold winter then 20:14 in the evening whoops power steering leak

EDIT: It of course could be a lot worse considering the car

Nice, welcome to the forums! I’m glad there are more 75 fans on here than I expected

On the power steering issue, turned out it was just a hose problem so luckily didn’t have to replace the reservoir or the pump itself. Wish I’d have a proper garage though cause I wouldnt’ve had to go to a british car mechanic.

Got a nasty surprise today, I should’ve seen it coming of course pre-emptively but anyway

Went to get my summer tyres from storage to pack them into my car so I could take them to a place to get my winter tyres off (I’d do it myself obviously but I don’t have a garage, looking to rent one of those rentable garages with all the proper equipment and facilities and space for 2 cars)

Well turns out the summer tyres are just a bit too worn for legal road use. I can still take them to get switched but that’s a waste of a reservation. I can still drive with them in city conditions in the dry but I’m about to do long distance trips.

TL;DR I’m gonna have to sink 3-5 hundred on new tyres and I can barely afford it because I wasn’t expecting it.

TL;DR I’m gonna have to sink 3-5 hundred on new tyres and I can barely afford it because I wasn’t expecting it.

Welcome to the car ownership life, my friend! If it isn’t tyres, it’s a battery or suspension bushes or brake pads… I recommend you start a saving account and put away a small amount each payday. That way you’ll have a cushion to soften the blow!

I’d say its less to do with who actually wants one and more to do with who actually buys one. I get the sense modern Rovers are a lot like modern (mid 90s onward) Buicks here in the US. They are good cars and some of them are even good looking. But they’re somewhat pricey and they’re buttery smooth so all the pensioners buy them.

Actually though, if you’re looking commuter car that will never quit, get a 1997 - 2005 Buick Regal or Century. The interiors will fall out. The doors will rust. The car will be a cosmetic and stylistic disaster. But you will never kill a 3800 V6 or a 2nd gen GM W body chassis and suspension.

@Noporian Yeah I had a similar thing happen to me not to long ago. I was putting off new tires this winter because I was a bit strapped for cash but then got my hand forced by a delaminating tread. These are the joys of car ownership. Shit breaks when you least need it to and its a bucket of moola to fix sometimes.

Got a nasty surprise today, I should’ve seen it coming of course pre-emptively but anyway

While I’m extremely pleased it wasn’t, you can’t be starting posts like this in threads about a car with a K series man. Minor heart attack expecting head gasket for a second there.

Btw I completely forgot to say that it was luckily just a slipped hose rather than the actual pump or reservoir breaking, and while driving the car to the garage without power steering (to save the pump had to cut the belt) I found out that I actually really, really like to drive w/o power steering, like it’s a gem when you’re parking but on the motorway it feels a lot better without power steering

A fine choice! My first car at 21 years old was a 75 Estate. It was manual, 2.0 diesel engine. I bought it at 120k miles and sold it at 175k. It needed a clutch when I bought it and this was partly factored into the price I paid at the time, other than that all it needed the whole time I had it was new brake pads and tyres.

I went from the Rover to an Alfa 159, again a diesel manual estate. It was very pretty, and nice inside. But it was a step down in many ways. It didn’t ride as well, and had all sorts of issues with the switch gear, electrics and air con. I finally had enough and had to sell it at a low price just to get rid!

Best thing I ever did… Because then I discovered Series 1 Citroen XMs. I own one now, going to get another in a couple of days. Big Citroens are the bomb. I’ll alternate between them one on the road, one off, and that will let me keep on top of any little issues. Insurance (I’m 31 with 7 years no claims) is under £140 a year. And my manual 2.1 turbodiesel gets me 55mpg on the motorway and about 30 through town.

I’ve definitely considered “upgrading” to either the late facelifted ZT-T or a 75 Estate cause the newer ones look really nice and I like estates but I am slightly wary of them because as far as I’m aware they’re not as well built as the 99 model year. (Is that true?) Money is also an issue though.

No but seriously I’m paying 1200€ a year for the Rover and that’s the cheapest possible insurance that I got because I drive less than 5000km in a year and this insurance firm takes mileage into consideration. So whenever anyone’s like “oh my peugeot 307 is insured for 400€/ a year” I die a Lidl inside.

But yeah I’m also into big ol’ citroëns but just not enough to own one, you know?

I’ve definitely considered “upgrading” to either the late facelifted ZT-T or a 75 Estate cause the newer ones look really nice and I like estates but I am slightly wary of them because as far as I’m aware they’re not as well built as the 99 model year. (Is that true?)

From the very moment 75 production moved to Longbridge, the 75 became subject to a new cost cutting program known as Project Drive. You, having a 1999 one, have one of the best quality examples about, as it is a car built in Cowley (as opposed to Longbridge) before the introduction of Project Drive. The scheme wasn’t that bad at first, but eventually they did things like delete the whole rear anti roll bar, delete silencers from the exhaust system… things like that which really affected the feel of the car.
The facelift cars might appeal to some, but they’re quite different cars.
You can read more about Project Drive here: https://www.aronline.co.uk/facts-and-figures/history/history-project-drive/

(Also, please I paid £2100 for insurance on my Rover this year

That’s only because you refuse to get telematics insurance haha

Yeah the later cars are not an upgrade!

To be fair that quote was half the price of the next cheapest insurer, so might have been an anomaly!

I knew a guy who had 8 Citroen XMs on the road at the same time and paid £300 insurance!

You do get done over in tax, though. The one I’m going to see in a couple of days is a 2.9 litre V6 petrol. Even my diesel is 2100cc, if it was under 2 litres it would be about half the cost in tax!

I wish exemption rolled around quicker…

Could it be time to say good bye to the Rover?

No, luckily I didn’t have a bad accident with my Rover, we already have enough of those on this forum. However, right now my situation is so that I could save from 1000€ a year in insurance and tax alone if I switched to something a bit smaller, not even accounting for how much this thing drinks fuel. There’s also significant rust that while right now is not threatening and is only “cosmetic” it could worsen and I don’t have the money to fix it before it worsens so I’d rather chuck it to be someone else’s problem.

I just don’t have the income right now required for keeping a car like this but damn do I love it. It’s really hard to even think about selling this car, so good in many ways. Guess it might be time to come out of retirement after only 8 months. (see what I did there ;))

I’m still gonna have it for some time because I doubt it’ll sell in a heartbeat and I don’t want to give it to a dealership because I’ll get nothing back from that, but while I look for a new car (a 316 compact I really liked just got sold under my nose) at least I’ll have my trusty, comfy, sturdy, thirsty, handsome, roastinghotbecausetheclassicmodeldidn’thaveclimatecontrolonlybasicfans, Rover. Maybe in the future when I have a better income I’ll buy a 75 connoisseur, who knows.

No, luckily I didn’t have a bad accident with my Rover, we already have enough of those on this forum.

Shame to hear you’re looking at getting rid of it though. Maybe have a look at a smaller diesel car?

Nah, getting even a smaller diesel would at the very least triple my yearly tax, I don’t drive enough for the couple cents saved on diesel to offset the 600€+ increase in tax. Not sure why the 75 is so expensive to insure though.

Situation update: July was even hotter than june and it was roughly +35 every day in my part of town so I just gave up driving near completely for the month unless I was going swimming and kept the windows open at 80km/h. However it is now end of august, the temperatures are at max +22 and it’s semi wet so no need for ac anymore.

The boot leaks. I don’t know how. I don’t know where from. I scoured different forums looking for the same symptoms but even if I rip out the boot lining there are no wet spots or drip marks on walls that would indicate a leak. Water just appears on the driver side of the boot (never in the spare wheel well it’s pretty slight compared to some stories). Leaks seem to be a common issue but they also have common reasons, I can’t for the life of me find the leak. Current solution is switching towels whenever it rains.

I haven’t noticed it before because I used to live in a flat with a big ol gated garage before june, and it hasn’t rained pretty much at all for the whole of summer.

Added bonus: Decided not to sell the car for now, mainly because I’m honestly not bothered to go through the process of selling but I also like the car too much and know that selling the car now would mean the summer tyres were a complete loss. So stylish driving for the time being, time for an MOT.

9 times out of 10 it’s the rear light seals, but I’m sure you’ve seen that. Occasionally it’s the boot seal itself but I’d redo the light seals as a matter of course.

Well heck, at least you’ve still got a month (…ish…) until autumn and those leaks really matter