For 1975, Sidewinder Division pulled out all the stops, plugged in most of the whistles and let the sales speak for themselves …
After being in development since 1966, beset by one terrible turn after another, Sidewinder was finally able to bring to market a reliable front wheel drive system. One that didn’t lock up due to over heating as the early units did. Nor one that simply quit working after only 11,000 driven miles, for reasons still unknown to this day. Not only did Sidewinder introduce a reliable front wheel drive system in 1975 but also upped the ante with richer interior appointments. Crushed Velour, Satin Cloth and Rich Tanned Leather were offered for interior trim. A choice of Sunroof, Moonroof or T-Tops could be ordered. The Z8 trim even came with a trash basket attached to a locking fixture under the passenger side dashboard and a rear seat armrest that could double as a hand warmer or even a pillow for long trips.

Finally, something that gives lie to the belief that muscle cars always have to be purely rear-drive. After all, if the Toronado made a front-drive platform work, then the Sidewinder most definitely can. 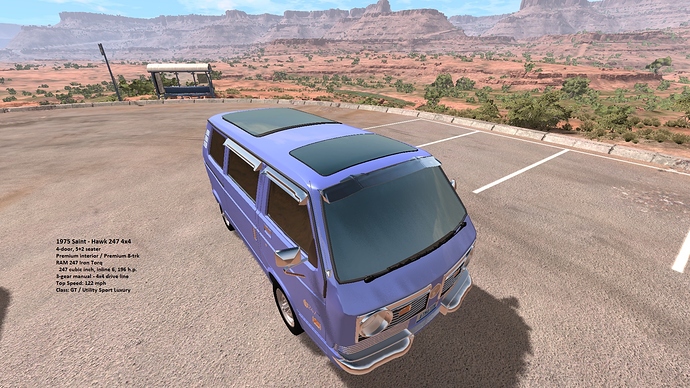 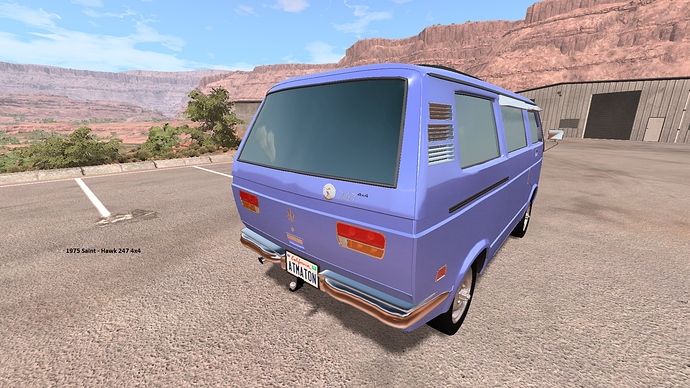 Saint - A Division of Retro Age Motors
Enjoy the Experience

The late seventies saw most of Retro Age Motors’ divisions coasting on past success but not the Sidewinder division. Striving to improve performance, while at the same time keeping costs passed on to the consumer to a minimum. This had to be counter balanced by the need to conform to government regulations, saw some interesting choices being made. Consider …for example, Sidewinder would dust off blueprints for the 430 cubic inch engine of 1968. The RAM 430 Tomcat had a limited production run between 1968 and 1970, not appearing under the hood of any factory produced car. But the engine could be ordered, along with a engine mount kit, from Sidewinder Division Parts Catalog. Another engine revived from the late sixties was the RAM 302 Sinister. This engine would receive a minor alteration but for the most part, it remained unchanged from the sixties version.

1980 - RETRO AGE MOTORS
SAINT DIVISION
For the 1980 model year, Saint Division decided it was time to introduce a new body style to their very successful 300 series. Although the car would remain at full size, it would see a small reduction in overall size. Saint continued the practice of sharing a common engine platform with Sidewinder Division and this allowed Saint to maintain a more upscale interior appointment as well as keep various quality of life features that had become standard equipment by 1980.

They may look nice, but those tires on the Brimmer are a far cry from utility, especially for 1980.
…And definitely not helping overall price or running costs either…

They may look nice, but those tires on the Brimmer are a far cry from utility, especially for 1980.
…And definitely not helping overall price or running costs either…

I am from the city, so my work depicts that background. Mostly in the city a pickup truck …wait, let me rephrase that …a personal or privately owned pickup truck in the late seventies to most likely even the present day, was owned for one of two reasons …a side hustle or to look good. Off road driving was done for recreation of course but not to the degree it is in today’s world. And surprisingly, in Michigan back in the seventies and eighties, SUV’s like Ford Broncos and Chevy Blazers were used more often to off road then a pickup truck. In the city, a guy could buy a 4x4 truck, put a snow plow attachment and winch on the front and wait for winter …instant hustle!

As for that running cost stuff and what was the other one you mentioned …oh, overall cost …I honestly do not concern myself with that stuff. I simply enjoy the act of bringing what is inside my head to the masses …that covers overall and operating cost for me.

Please, keep in mind also,overall cost and operating costs are mere guide lines. They are not set in stone, just written on copier paper …toss it in the trash and we can print you another one pronto.
Put another way …these terms help you the consumer gauge your finances against the automakers need to make a profit. They are not a check nor are they a balance, these two terms are a gate. Most folks I know, myself included at one point anyway, look at the cost up front but failed to look at the operating cost after purchase, which can be a real life sock it to me moment!

A Division of
Retro Age Motors
Parking Memories in the Driveway

No worries, you build your cars how you want them. That’s the point of the sandbox mode

I should have been a bit more descriptive, I was originally talking about your wide, low profile tires. If you wanted to follow real life a tad more the tires should have more sidewall (60-75 range). Or if the truck was “custom/modified/etc” then mid 1990s would make the tires a bit more realistic for an era.

Either way its moot now, enjoy making cars (truck in this case lol) as you want, that’s the beauty of the game.

(Side note: I do like the styling on it)

1985 - RETRO AGE MOTORS
Sidewinder Division
For the 1985 model year, Sidewinder introduces the All-Wheel Drive System into their lineup via the Sidewinder z85. With insurance companies threatening to list the z-85 as a “super” car, which would have driven insurance cost to heights unheard of for any Sidewinder vehicle to date. The division limited the power output of the RAM 293 SOHC-16 valve engine, to just 340 horsepower, which in turn, lowered insurance rates for buyers.

Material cost had been climbing upward since the mid seventies, escalating the overall cost of manufacturing automobiles and sending shock waves through the wallet of middle America. In a effort to limit the impact of these costs to its own customer base, Saint Division put an emphasis on parts commonality. 1985 was the trial run year for the “Commonality Incentive” program. Taillights, marker lights and even engines were used across multiple platforms. Interiors shared common parts as well, changing only the interior badges for trim level or model type. There were exceptions of course but overall, “what parts are in common with which model”, became the most asked question in inter office memos.

Saint a Division of Retro Age Motors
Enjoy the Experience

America is emerging from a long gas starvation syndrome. Once the American consumer can see light at the end of the tunnel, that’s it! America will go right back to her old habits …gas guzzling, powerhouse engines packaged inside long river barges on wheels …with a twist. The American consumer will demand more comfort, more safety, more speed and they will want all this packaged in a pickup truck. Retro Age Motors will have the truck America will demand. 1985 is the turning point all automakers have been dreaming of and we will are well placed to make America …Fast Again!
Excerpt from speech given by The Truck Division president, Abraham Cross.

The designs are nice, but the idea of luxury SUV’s wasn’t prevalent at all until the late 90’s or so, the LT and Fleet models are far ahead of market trends

The designs are nice, but the idea of luxury SUV’s wasn’t prevalent at all until the late 90’s or so, the LT and Fleet models are far ahead of market trends

Not really. In 1985 the Chevrolet Suburban was built on the frame of a pick up truck but given a station wagon body. I believe but am not sure, many states and insurance companies classified the vehicle as a station wagon but some called it a truck. Also, the term sport utility vehicle is a product of the mid nineties but not the vehicle itself. I think it was the Jeep Cherokee of 1984 that actually kicked off the SUV craze. The 1984 Cherokee has the body style that follow on designs are more or less based upon today.
So in 1985, the Diamond Fleet and Diamond LT would most likely have been classified as trucks but the idea of calling the Fleet a station wagon is not far fetched.

Thanks for the tip.

Thanks for the tip.

About how the term SUV wasn’t really used till the 90s. Cause I would usually classify a vehicle as an SUV even though from the Tim I made it it wouldn’t be called that. Now I know what to use.

1990 RETRO AGE MOTORS
Saint Division
U.S. automakers were switching to the metric system in mass …except Saint Division never ran with the masses! But fear is a powerful motivator and loss of sales could be deemed a huge reason to have late night anxiety attacks. They have medicines for that or …alcohol works too, I guess.
The Commonality Incentive Program, began back in 1985, was doing very well in keeping cost from rising too fast to be managed effectively. So consumer pricing for Saint vehicles were not going up by as large a margin as other automakers. This did pose some issues to Saint Division which was traded on the stock exchange. It meant that there was an artificial sense that Saint Division was not growing. Other automakers were posting large dollar sign sales numbers but this was fueled by their increase in cost to the consumer. Because Saint had managed to keep from passing large costs to the consumer, it also meant Saint’s dollar sign sales figures were not as high, which in turn implied lack of growth to the uninformed. Overall, Saint broke even on the stock exchange when perhaps it should have seen a large jump.

Saint - A Division of Retro Age Motors
Enjoy the Experience

1990 RETRO AGE MOTORS
Sidewinder Division
We Didn’t Start The Fire …but we didn’t bring water to put it out either …our bag!

I Wish It Would Rain Down …wish granted …snap-blam-poof!

Love Will Lead You Back …nah, he took the Z …girl …he gone!