That’s even worse than Fiat 126 by about 20 seconds. It had 5hp more with more or less the same weight, but it still was very cheap car.

It’s because of the gearing. It reaches 60 km/h in a few seconds, 60 to 80 in 3rd starts to slowdown significantly, but it can barely go above 80 km/h. A forth gear will (probably) solve that issue.

Unless it’s Bis, yeah, this thing was quicker

For those who wanted more car than the Majime, in 1968 Sanda upgraded the Archer. Based in the same platform as the last generation, this time the engine was mounted transversely moving the front wheels, the same winning formula as the Majime.
2 engines and 5 trims were offered, ranging from $7,080 to $11,868.
The basic ones were the 2-door, 4-door and the wagon, powered by the same engine as the Sado Carrier, an inline 4 cylinder OHV with 37 horsepower matted to a 3 speed manual gearbox, while the Premium and the Trotter trims came with a brand new 1L L4 OHV with 48 hp, with either a 3 speed automatic or a 4 speed manual.
This was the best selling car of the 60s and early 70s for the company, which actually made Sakuko Sanda consider to expand the company line-up away from the compact and the K territory. 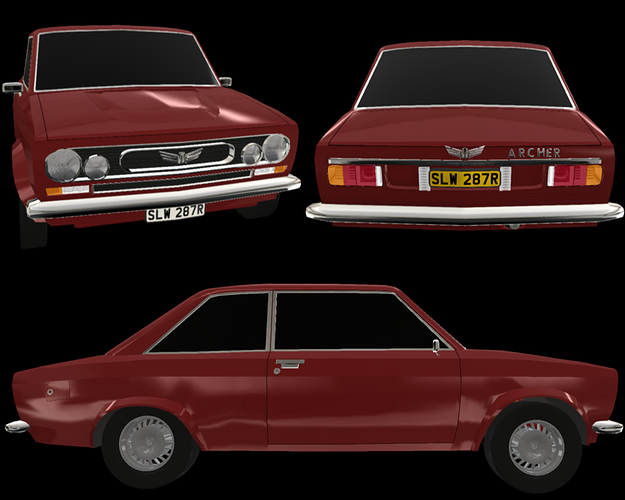 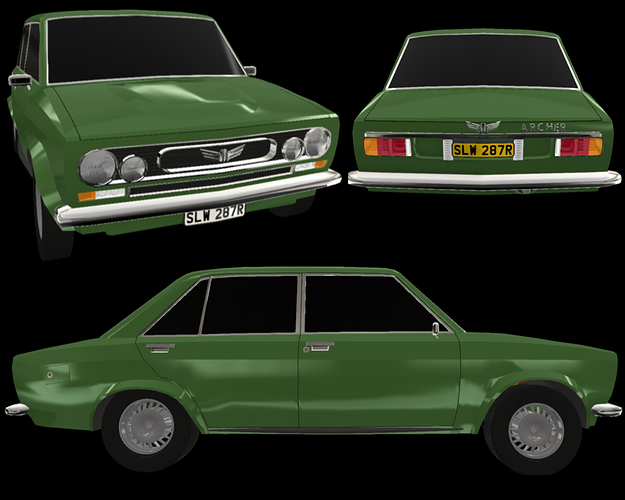 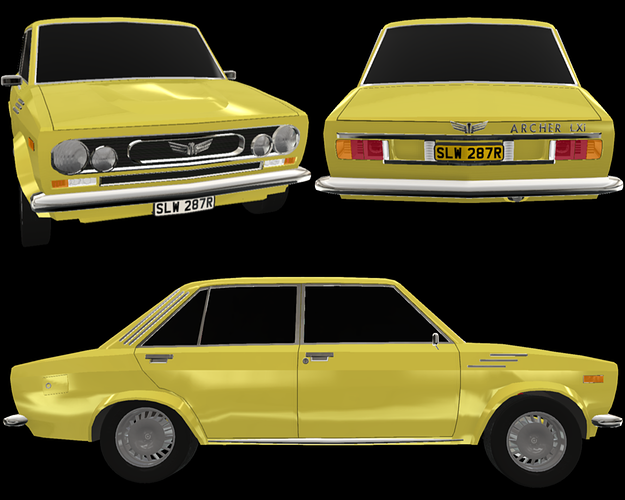 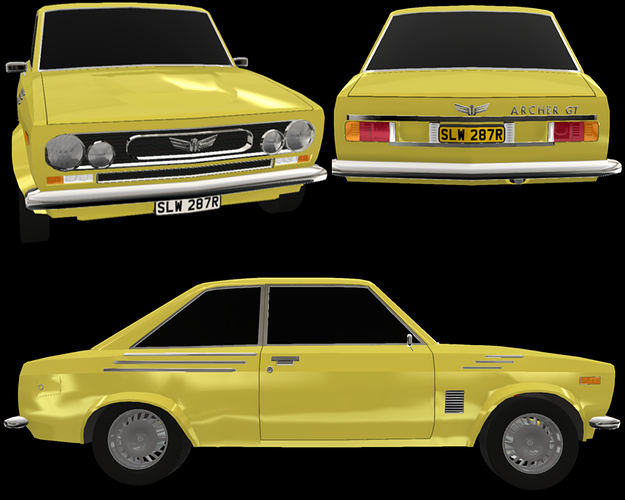 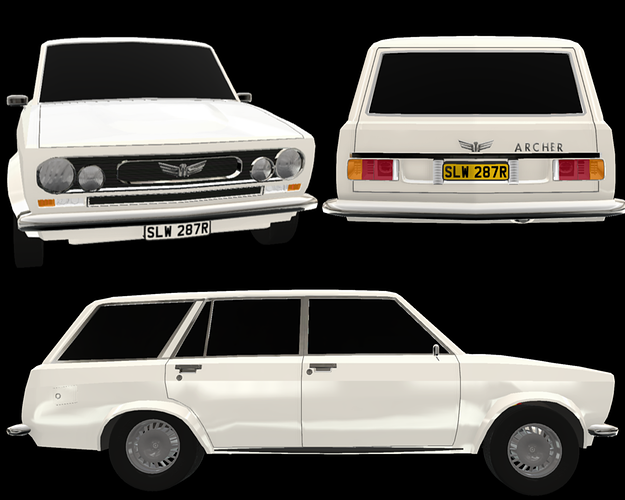 Cheap car with 49hp named “GT”. Would drive very much

Nah. It’s not about being underpowered, I just like cars that include a bit of nonsense

PS Or are surprising in a way. Or at least not something one might expect.

The term “GT” is so vague that there is no irony to be found here.

PS Although as a trim name it’s like “slightly more power, a bit of fancy equipment”, which makes some sense.

For us petrolheads, but for must people and specially marketing people, GT equals to sportier than normal version xD, so with the right justification, you can badge any car with a GT insignia

But here is another silly take on a sport car.

After the presentation of a prototype in 1966, 2 years later, the official project came to the light, and this time, looking better.
The Sanda Proton was the take on a sport car, taking the characteristic small engine design of sanda. It was powered by a tiny 1.3L flatplane V8. Since the parts were so small, you don’t had to worry about vibrations, and the engine could rev up all the way to 7,800 rpms. All of that, plus a futuristic alienish design.
Sadly, there were some crocks with it. The fuel economy was one of them, it was rubbish for such small engine and power output. Also, due to the dependent rear suspension, and poorly tuning, it was unstable at high speeds or in bumpy surfaces.
It only remained in production 2 years and it took 3 years to sell every car, and to this day are considered collectible cars. It also founded the seed for some of the characteristic sports cars with small displacement that Sanda will manufacture in years to come. 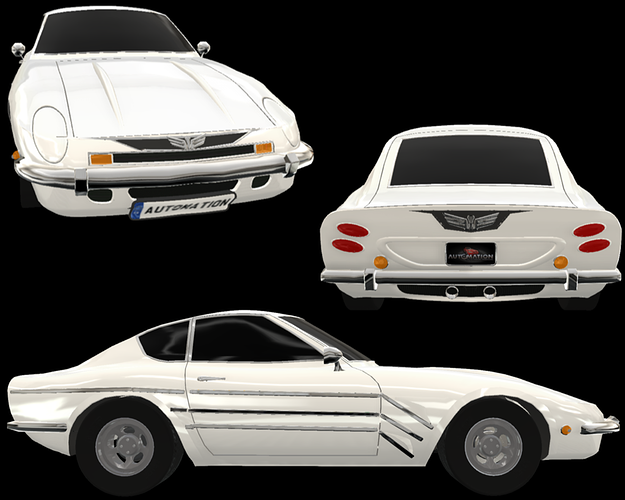 The 1968 Archer. Welcome to the Danger Zone…

That car looks so… 70s, but not the good Escort 70s, more like very cool but a challenging experience Fiat 70s

After the good way the Archer was received, Sanda decided to produce a new car, specially targeted to premium buyers that wanted a coupé, with a little extra power than the Archer.

The admiral was slightly smaller than the archer, but it was equipped with a brand new L4 SOHC engine pushing extra hp to the front wheels. The car although was basically a 2 door version of the Archer Lxi received pretty good critiques, and it made some of other car makers turn the head around to the Sanda M. Corporation, such as the mexican company ADM that was thinking in actually take some of the japanese models and re-brand them for the american market. 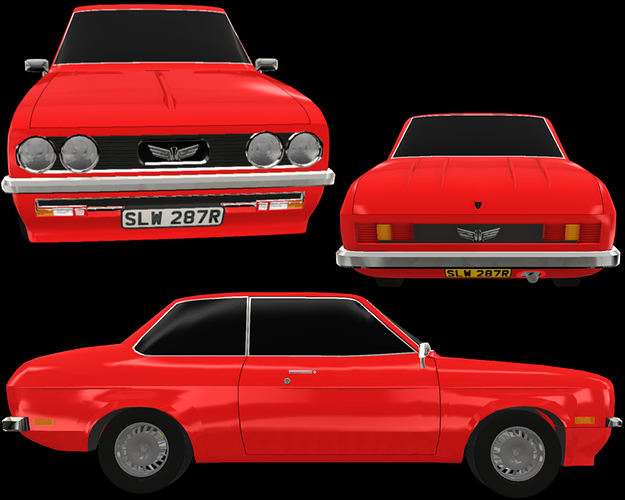 The economy was growing and so were the cities and the roads. By '73, the old archer was considered too slow (even the GT trim) so in the next iteration, with a new facelift, Sanda gave the cars a better and brand new engine.

Made of iron, the A1 was the biggest engine offered at the time, ranging from 1.4 to 1.6L. The valvetrain was a simple direct acting overhead cam instead of the complex 3 valve per cylinder used in the '70 Admiral. 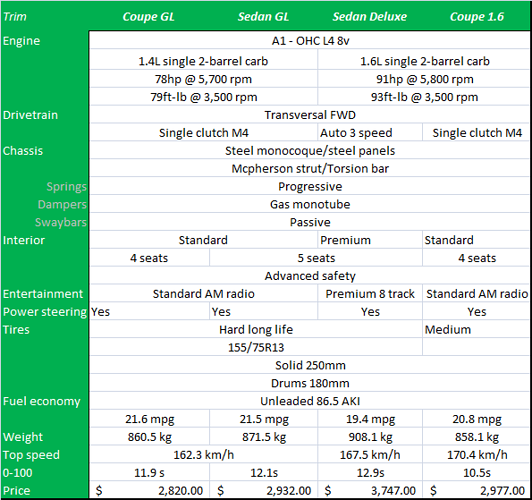 It looks unassuming, but the Archer is shaping up to be a great entry-level compact car from what I’ve seen so far. It finally has the engine it deserves!

Gosh darn that is a pretty little car!

Good things to come!
(in the meantime I need to make sure this company’s models don’t compete with each other).

I need to make sure this company’s models don’t compete with each other).