Do we have any model builders in here? Sadly I haven’t finished much this year but I have been building lots through the years…

Some of my work from the last years:

Nice work. IMO, the best one there is the Galaxie. Haven’t built a model myself in… wait, what year is it?.. A Looooooong time.

bild.jpg1023x673 113 KB
Yeah, I tried to build it as true to the 1:1 as I could…and I think that it went quite well, maybe the blue should have been a little bit brighter…

Also, I leave this thread open to other peoples builds too, so feel free to post.

I’ve stopped building a long time ago. Too expensive of a hobby to maintain together with restoring a real car. I’ll gather some pics of my old models. 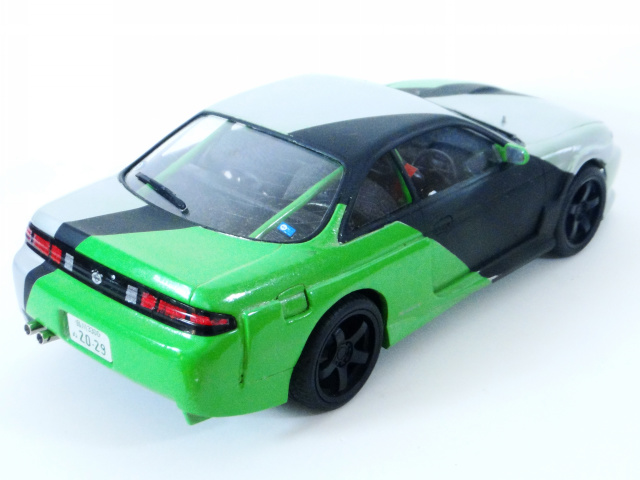 I’ve managed to find some photos of my models on an old forum. Most of those were already sold or dismantled for parts.

It’s really some lovely work there…

Just took pics of some cars that I’ve built but never photographed.

This Interceptor is a papercraft I’ve printed on heavy black paper, and build with some model car parts. A heavy rust and wash job complete the look.

This beach buggy started life as a 1953 Ford Crestline Victoria, dismantled after an accident and turned into a fun machine.

This Chevrolet 3100 pickup had a top chop and received a Chevy 502 paired with a Toronado transmission on the rear, along with a “solid axle” rear suspension (the powertrain is suspended with the wheels and axles)

That’s a Ford model A body over a '70 Corvette chassis, with a Chevy V8 and a custom intake for a Dodge Six Pack. And '57 Chevy headlights.

That’s one of my favorites. This Chevelle is owned by a desert dweller on a post apocalyptic enviroment. It runs on a watercooled electric motor powered by a solar panel over the top. The suspension is raised and the trunk is full of batteries for running in dark conditions. There’s a detailed stripped interior with a spare tyre and the power cables, along with a voltimeter on the dash. There’s also a crowbar for safety.

This one started life as a damaged AMT 57 Bel Air customizing kit. It’s waaay far from it now. The top was chopped and shortened, the body was raked and narrowed, and a supercharged 426 Hemi was dropped on it. Surprisingly, the chassis is completely stock, apart from the lowered front suspension.

So…what have I done in almost two years? Actually, quite a lot.

chevyvan.jpg1024x768 164 KB
Chevy Van (yes, I used the horrible custom parts in the box, just because I could, they didn’t fit very well either, so yes, it should look this awful

camaro.jpg1024x768 148 KB
1970 Chevy Camaro (horrible fit issues up front, I should have checked them up better before painting, oh well…)

For all their faults (whatever they are) , everything you have made in the past two years has turned out better than I thought it would. Well done, and keep up the good work!

Yeah, I looked at my 2019 builds a while ago and realized that my improvments during this time are quite impressive. The 48 Chevy, the two Volvos, the Lotus and the Audi are on a level I thought I would never reach tbh… Not trying to brag, just being satisfied.

1969 Ford Galaxie. Far from the build that I am the most proud about, on the other hand built from an old kit with crude detailing and bad fit. Oh well, better one finished build in 2020 than none.

Good to see this topic alive again. Ever since I broght a 3D printer, my focus shifted from building models to design, print and paint 1/64 cars. Here are some of my favorites.

Well, certainly no lack of creativity there, nice!

I got this Speedwagon from my father as a birthday gift in 1998, finished it in 1999, I have wanted to restore it for many years, and earlier this year I found the parts I needed so I tore it down and rebuilt it. Not 100% perfect but I wanted to keep as much of the original build as possible, so I am satisfied.

Yo arent those wheels on the VW beetle from a Porsche model kit?

The title doesn’t say it has to be cars. This is by far my favorite model I’ve ever built. 140 cm tall Fallout 4 West Tek T-60 power armor. I took files for a solid statue, made it printable, and added articulations, printed, painted, and weathered it. It’s for free on Thingiverse, but you can buy the files on Cultis if you wanna support my works.

First of all, I need to thank some people: arboriginal for giving me the push I was needing to finally tackle this long wanted project by posting his 200% FO Joe, rbuckbailey for creating the figure that inspired this project and served as...

First of all, I need to thank some people: arboriginal for giving me the push I was needing to finally tackle this long wanted project by posting his 200% FO Joe, rbuckbailey for creating the figure that inspired this project and served as...

Looks like an old topic is getting revived. So I’ll jump on the bandwagon. I have a decent number of scale model kits at home, but barely build any. Mostly because I take my time to build them. And for some kits I just find it a waste to build them, I’d rather keep them original.

This is my most recent build, which currently is on hold as I didn’t really had/took the time to continue with it the last few months:

The last thing I did to this was using fake leather from an old wallet to put over the seats. Which looks nice, although the thickness of the material unfortunately makes the seat loose a lot of detail.