Remember to submit your car before the deadline ends!

This 2020 Atera ZR/6 Vision Gran Turismo was created and designed from in-house Atera Automotive design house with collaboration with Italian company, Quaglia and of course, Vision AT team.

As a nod to AT’s invitation to make Vision AT cars to them, it was created solely for Automation Turismo series for exclusivity of the car. This concept car is Atera’s latest halo car as this is the car where newer production Atera line-up design language will be based on.

Powered by a mid engined 4.0L turbocharged V6, capable producing up 883hp and 889nm of torque powering the rear wheel, it can go up to 415km/h with 3.2s 0-60mph, all thanks to carbon fibre panels and chassis and sporty interior making it lightweight.

But with being a lightweight car, the car can be tricky to drive at high speed without any aerodynamics on it so the team equipped a high tech spoiler, shark fin and big side vents to help the car be more stabilized during high speed while cooling the engine bay and such.

2020 Atera ZR/6 Vision Gran Turismo is the most advanced car from Atera Automotives that will ever produced and it is a car that exemplifies about excitement and hardcore track day car.

It will be a cold day in hell when we deny an opportunity to make something fast.

The Vision Penumbra is the 3rd prototype we have unveiled, And it will be available to to drive in Automation Turismo: Connection (hopefully)

Squeezing out as much power as it can from the 4-Liter V10 as we were able to get it to, 890 hp for 1320 kg is a Respectable figure, Although not exactly impressive.

It is not the exact definition of a Supercar.
It does not reach record-breaking speeds.
It does not pull 2 G’s of force at a turn.
The 1/4 mile barely breaches the 10 seconds.
But there is one very important thing it does achieve:
It is fun as hell to drive.

When it becomes available, It will be purchaseable for only 500.000 cr, Being on the cheaper side of the scale. It will also be obtainable on the “Sports of The Skies” Special event, A One-Make race for Modern Alba sports cars.

Color options are Nightly Dark and Mythril White.
The Prize Penumbra comes in the pearlescent ASC-2, A purple with orange highlights.

Aether looks both to the past and the future with their entry into Vision Auto Turismo collection of cars. A continuation of their previous 17/2 supercar, the 17/2 Aerolithe pushes the envelope of Aether’s expertise in forming aluminium. The overall design harkens back to the auto union streamliners of the 1930’s, but updates where that iconic silhouette fell short mechanically. The front is the start of two aero tunnels that flow all the way to the back of the car, only giving a partial diversion to feed the massive 8.5 liter N/A magnesium V12 that’s under the hood. The quad fans at the rear assist in this airflow, causing the whole car to behave like a giant wing. That may be all well and good for sticking to the road for top speed, but the active aero fins on the rear of the cabin are what lets the Aerolithe corner with such precision. These features combined, as well as the wide rear tires, allow the car to corner at a decent 1.8 Gs and provide an overall 1477 lbs of downforce across the entire car. The turbofan rims and hidden rear wheels complete the futuristic, streamline styling.

All that aerospace engineering that Aether is known for would be wasted if the Aerolithe didn’t have the power to back it up. Luckily it has power in spades, with that massive V12 pumping out 611 hp at 6600 rpm through the rear wheels. But wait, doesn’t the in game description for the car list it as mid engine awd? That’s where Aether’s newest venture comes in. The 17/2 Aerolithe is in fact a hybrid, a first for the brand, and where better to get a feel for the new technology than when you have video game levels of budget and R&D time on your hands. The Aerolithe supplements the power from its V12 with 400 hp from two electric motors hooked up to the front wheels. These motors are detuned versions of what is powering each wheel of the Rimac Concept 2 and bump up the overall power output of the Aerolithe up to 1011 hp, giving it a top speed of about 210 mph and a 0-60 of 2.3 seconds. That’s not horrible considering the car weighs about 4000 lbs. All most people will probably see of this thing while it’s on the track is a silver blur and then the afterglow of the OLED strips that encircle the car. The strips are fully RGB programmable from inside the cabin, and function as indicators.

The usual Aether luxury is not lost on the interior of the Aerolithe, where due to the cabin’s unique shape, its two passengers ride in tandem, just like in the light aircraft that Aether originally made during WWII. The gauge cluster also mimics the flight heritage of the brand with the shape of the steering wheel, air conditioning vents, and various settings available on the hud. Unlike Aether’s fighter planes of yesteryear, the majority of the cabin is incased in light yet cozy cashmere instead of the expected alcantara. This, as well as the pseudo wing-back seats lends the air of a sci fi study to the interior, making a place to be calm while you’re rocketing around at over 200 mph. The OLED light strips from the exterior are mimicked in the belt line of the interior, as well as being used for the curved screens that replace the rear view mirrors. The seats are nestled down in the cavity between the two battery packs, which are so positioned to give the Aerolithe near 50/50 weight distribution. While the steering may be electric and assisted by the front motors, there is still enough force feedback through the wheel, as well as Aether’s signature brake nub, to still give plenty of road feel while the hydropneumatic suspension soaks up the bumpiest of roads. Under normal driving the 17/2 gets around 31 mpg from its hybrid system, which is sure to come in handy for the longer endurance races in the game.

Overall Aether is very pleased with how the futuristic 17/2 Aerolithe Vision AT has shaped up. It may not be the fastest, or the best handling car here, but it has a uniqueness all its own and shows off all of Aether’s strengths.

The 17/2 Aerolithe Vision AT comes in 7 colors for players to choose from, but has the options to do custom paint from the swatches the player has already collected. The OLED strips can also be color customized, while the wheels must remain the stock turbofans. It can either be won through a historic Aether cup that’s locked behind the player getting their super license, or bought through the Vision AT store for 2,000,000 credits.

Here, have some music. 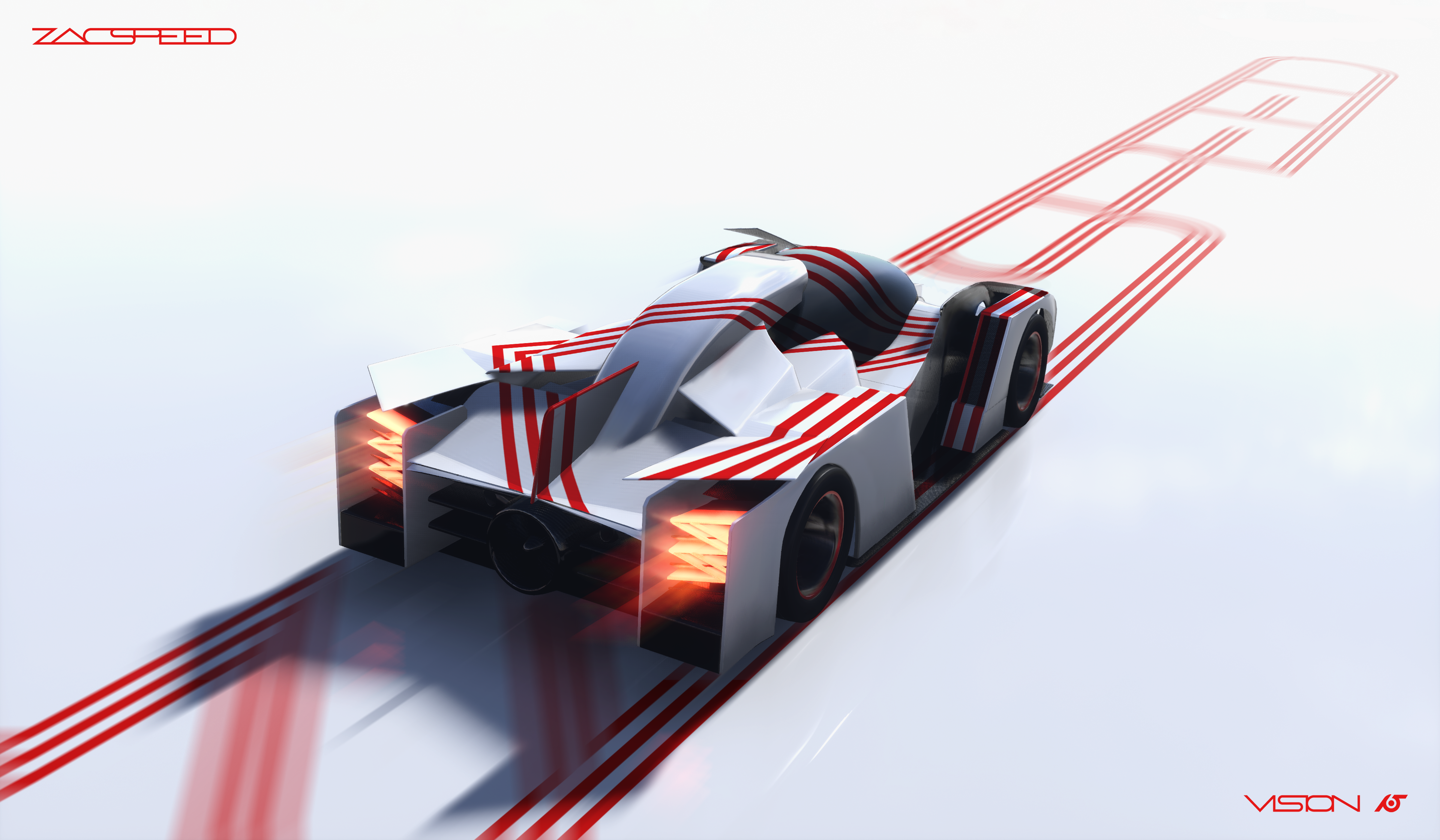 Thank you so much to @XenoYparxi for this photo edit!

almost forgot about this shit

I have recieved entries from:

The ad deadline is in 24 hours. 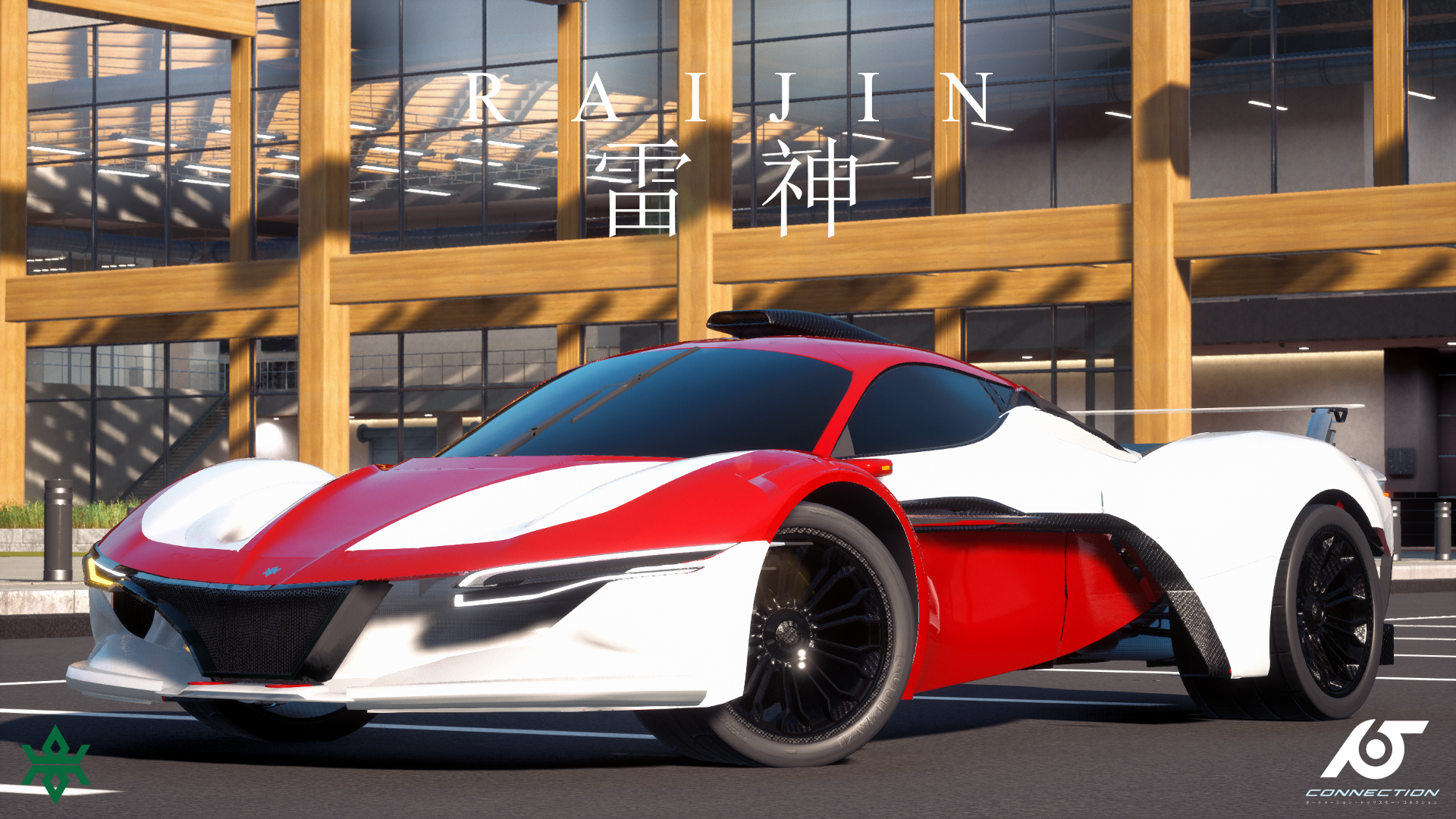 PROJECT VALENTINE-STINGRAY presents the Raijin Vision Evolution, a comprehensive engineering study and passion project that aims to challenge design conventions while also serving as a symbol of our heritage and our ultimate flagship that embodies Seikatsu's core principles. Inside and out, the Raijin provides a raw, visceral auditory, visual, and tactile driving experience that's simply unlike any other. 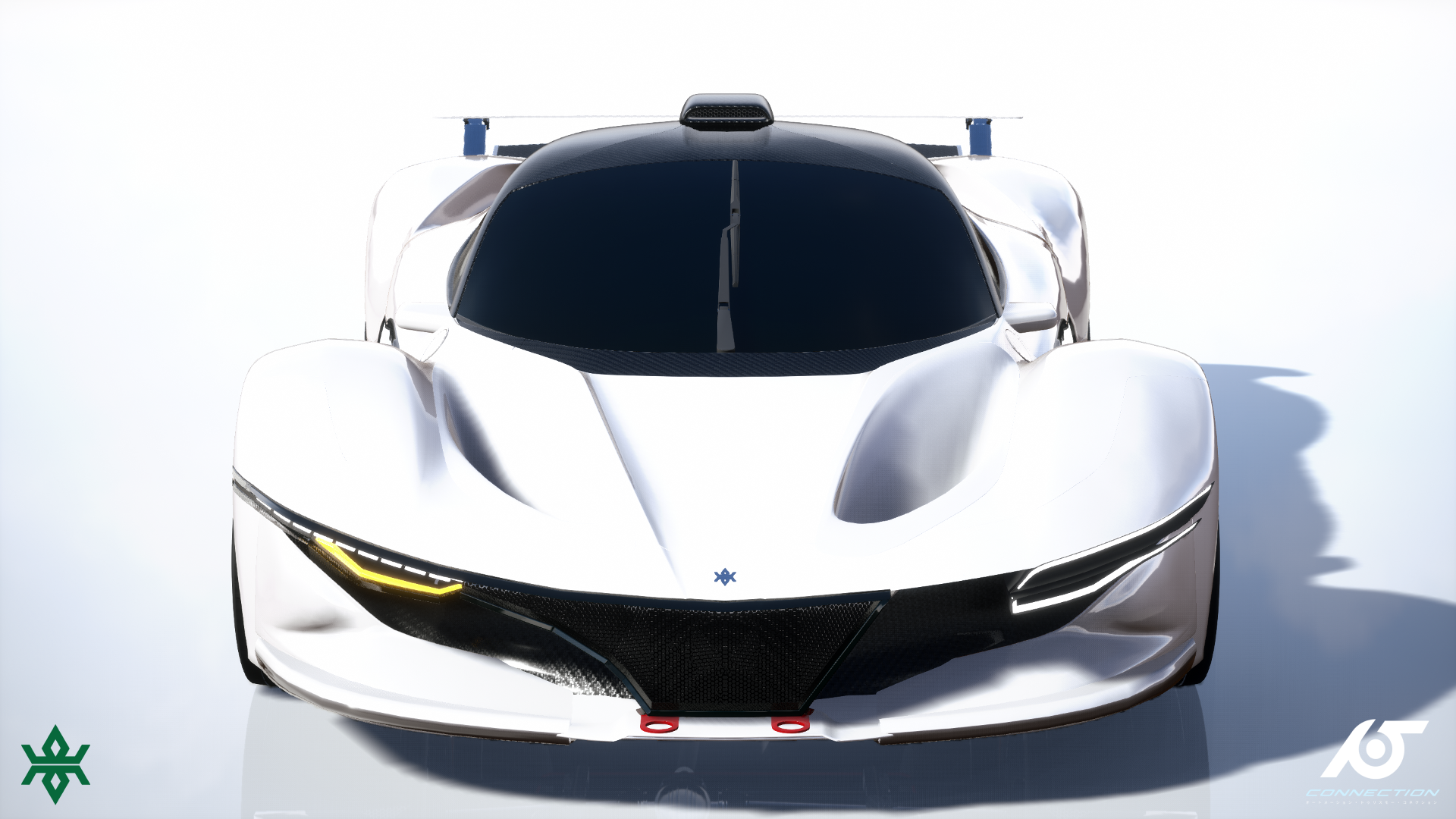 The Raijin Vision Evolution is synthesized from the ground up to push the boundaries of aerodynamics and our "Kadō/Ikebana" design philosophy. Asymmetric design cues on the front fascia and rear lights serve not just as a testbed for potential design evolutions but also help establish a truly unique presence on the road. Sweeping, sensual body lines and sculpted, flowing curves provide an unstoppable momentum to the Raijin even when it remains motionless. A tapering vertical profile towards the rear half and wide, low proportions are historical callbacks to Seikatsu's endurance race cars from the 70s to 90s. 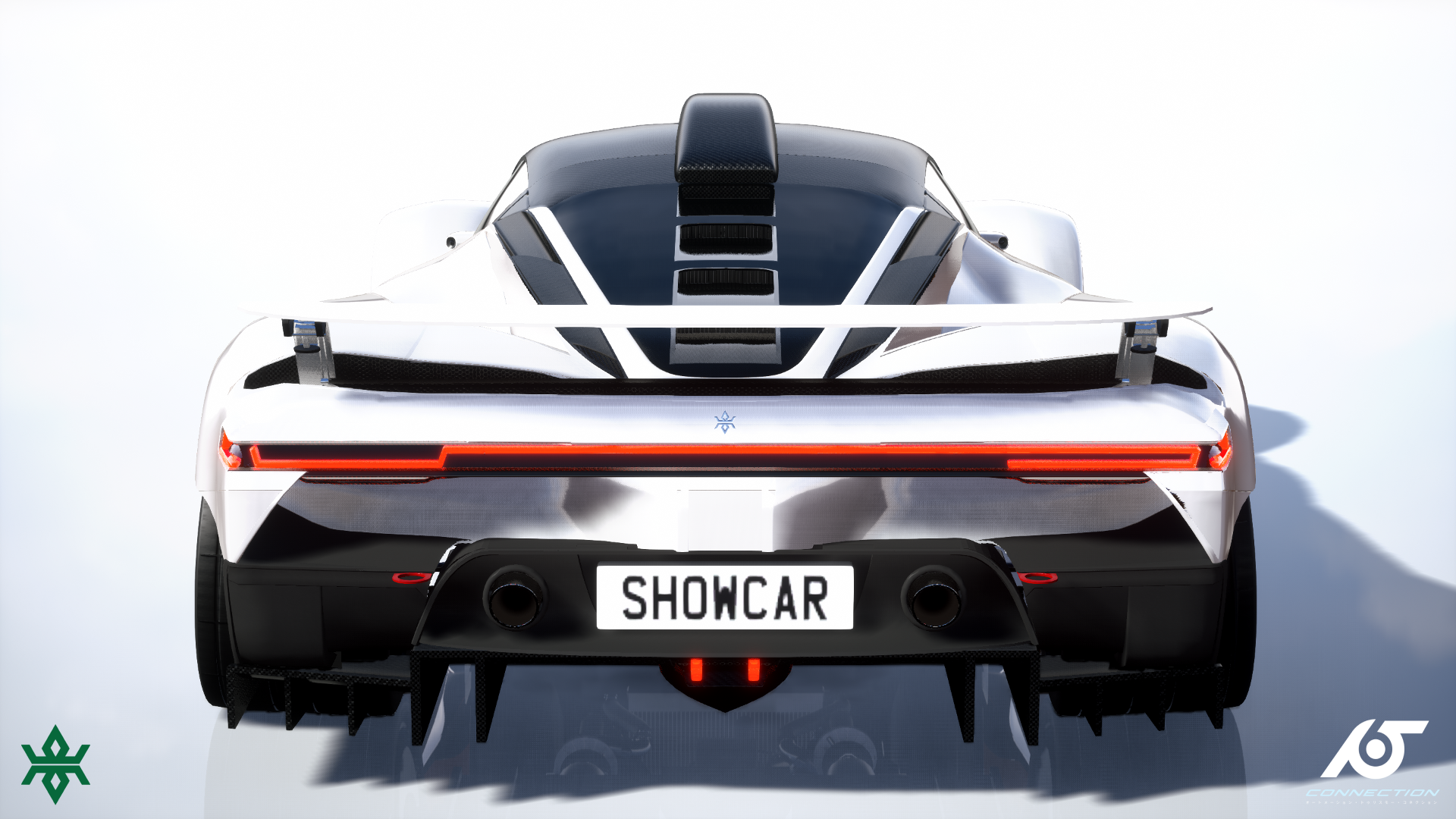 The Raijin takes its name and likeness from the Japanese deity of inclement weather. A thundering hymn from our 1246hp 5.0L twin-turbocharged V10 propels the Raijin to 100kmh in 2.2 seconds, through the quarter mile in 8.82, and to its terminal velocity of 254mph. A new active aero technology suite utilizes artificial intelligence and fuzzy logic to provide the optimal amount of downforce depending on speed, cornering forces experienced, and a multitude of other factors. Combined with a hybrid carbon fiber and aluminum chassis, the Raijin accomplishes a Nurburgring time of 6:38. 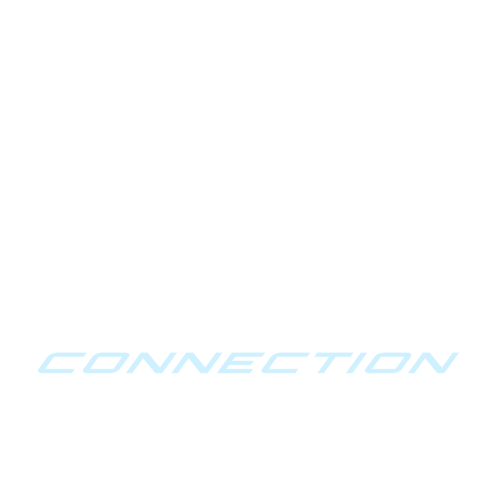 Heavily inspired by Pilati’s legendary lineup throughout the years, the Pilati Ultimo Vision Automation Turismo takes the best of the past and brings it into the future. As the name describes, the Ultimo VAT is Pilati’s ultimate vision of the future, a preview of what’s to come.

Instabins are coming tomorrow! Expect reviews to come out in a week or so.

To all of those that survived Bin City, the real reviews are coming in a few days!

Also, let me know if you like this layout!

argh i already did an oopsie

An official message from RZei.

Due to a big amount of backlash, the VernonSport Vision (@micz244) is back in the list of pending evaluations.

Before the actual reviews start, here's a quick guide on how cars are judged.

On the side of every car, there’s a little trapezoidal pill of a different color each time. Here’s what these colors mean.

There are 6 categories where a car can be judged:

Each of these categories have a score of 5. Which makes the highest score 30.

If your score is in between 20 and 30, your car gets included on release.

If your score is in between 10 and 20, your car gets included in a future update.

If your score is below 10, your car doesn’t get included in Automation Turismo.

With that, here is the first part of the reviews!

second part coming whenever i can idk