The Car Shopping Round 131 - Wanderlust and Quarantine's Angst


For those new to CSR

ASSBLASTER (Annual or Sometimes Seasonal or Biannual Legislative Association of Special Tasks in Endurance Rally), a road trip rally adventure "race" in which contestants seek to race from A to B as fast as they can, completing a series of tasks along the way. The event is not about speed!

It's a fairly simple competition. The rules are as follows: total cost for the car, fuel consumed, repairs, and spare parts used during the trip must be under $2000.

As I mentioned in the background (which you should strongly read!), this challenge requires contestants to race from the starting point to a set destination and back. However, there are numerous checkpoints along the route, and each checkpoint has a task for the contestants to complete before moving on. These tasks are not to be taken lightly! In previous years, some of these tasks included carrying 75kg of cattle waste from one checkpoint to the next, or driving through the entirety of an autocross track in only the reverse gear (or neutral gear if going downhill).

Allow me to reiterate: this event is not about speed! These tasks are only revealed when the event actually begins, so really any type of car can be used, as no particular car will have an advantage over the other.

A word about judging, plus some other things.

With that in mind, are catalytic converters mandatory? Especially since Europe did not require new cars to have them until the early 90s.

I would also expect the benefit of older cars to be a lower price (which there is a little bit of but not much) while they’re still judged against the newer cars more or less evenly, as opposed to a system where they’re judged against cars of their era. It seems to odd to say, “We could buy this car which has the best gas mileage, or this car which is worse but better than other 80’s cars”. But, eh.

Servicing costs is representative of the “repairs”.

Reliability can affect if everything on the car still works, and if it’s all still in good conditions, relative to the mileage.

Or at least that’s what I can gather from it.

(This is the sporty one, not the ultra bland, dark green diesel.)

Yes, we’ve updated the rules to reflect this.

Exactly, higher reliability only increases the used price of the car. The logic here is that people will sell a more reliable car at a higher price because it’s more desirable. As for repairs, 1) these guys are amateurs and 2) older cars will generally have harder- to-find parts, so for simplicity’s sake we will assume that money saved through infrequent repairs is mostly negated by locating and finding these out of production parts so that the difference is negligible.

I would also expect the benefit of older cars to be a lower price (which there is a little bit of but not much) while they’re still judged against the newer cars more or less evenly, as opposed to a system where they’re judged against cars of their era.

We will take this into consideration. In the end we’ll most likely compare the cars not just to other ones of the same era but also to other cars from different eras in general. The purpose of the in-era comparisons is to see if some seemingly-low stats are justified due to the car’s age.

The ruleset, challenge details, and calculators are bound to change until the round officially opens. After that, everything will be set in stone. It's your responsibility to read up on the rules and update the calculator before submitting. 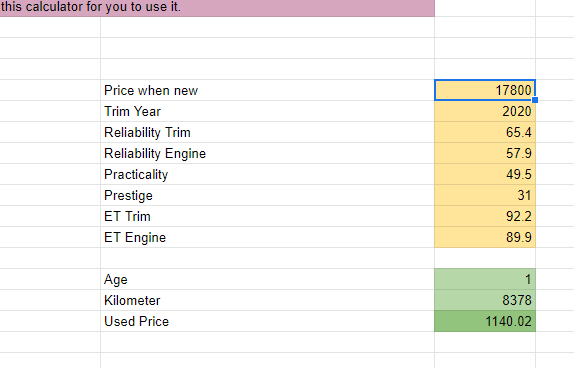 It appears that you have a range to choose from based on what he says. Your pick

"Are you looking for a great deal on an used car? Good news for you. Look no further than IP Center Berlin. Now we are clearing out some of our used cars. How about a great deal on this 2018 IP Rexetta… This 2012 IP Celestia… This 2015 IP Colibri… This 2016 Cascadia Hashima…or this 2014 Sisten Vienna…?

Or maybe you are more into 90s classics and then we have more great news for you, since now we will give you an extra great deal on this 1994 IP Rubiq!

Now, you get the chance to own this rare car that helped to create the crossover craze we still only have seen the beginning of. This piece of automotive history can soon be standing in your driveway for only 746.43. Yes, you heard right, 746.43! So why don’t you visit IP Center Berlin already today to check out our great summer sale on used cars?

We've updated the calculator and the rules, so please make sure your car complies with them. From now on, resubmissions are not allowed unless you've submitted your car before this post.

CSR isn’t CSR without the FM HiWay…so here it is!

You look to the weekly inkies.

This ad catches your attention:

am i able to submit

We’ve updated the calculator and the rules, so please make sure your car complies with them. From now on, resubmissions are not allowed unless you’ve submitted your car before this post.

My 1982 GMI Augusta. Mine is the Safari which offers the wagon body, slightly raised suspension, roof racks and and an upgraded gearbox. These cars came with the GMI B-Series flat 4, offered with turbos and EFI in the 1982 model year for better economy in non-base spec models. I got handed this one by my Grandpa in 2000 after he bought a new car. I’ve owned it since I was 17 and am selling as My kids have grown up and I want something smaller and less prectical.

P.S. The Shit brown is original to the car…

I highly reccomend you scroll up and read through the rules. If you don’t you’ll likely get insta