The Car Shopping Round (Round 64): Tears in Heaven

You’re looking for a classic model? I suggest you look no further than the…

CSR50 BobLoblaw - Petoskey Indian-4.png1018x376 323 KB
A little backstory on this unit. After the war, Petoskey Motors resumed production for a civilian market. Things seemed to be going well until some labor disputes got out of hand in 1948. The feuds between the unions escalated into a full blown mob war with most of Petoskeys factories right in the crossfire. Most of their production capacity was destroyed by firebombing and the company appeared ruined by the end of the 1940s. Their only hope lied in the new sedan they were designing, a general purpose vehicle that would be a suitable successor to the Model B.

CSR50 BobLoblaw - Petoskey Indian-3.png1018x376 372 KB
When the Indian made its official debut in 1950, consumers were impressed. The Indian proved to be a versatile platform and a two door sport variant was also released. Only two engines were used with the Indian, the first was the base model 261 cubic inch inline six, updated from the first generation engine. The other was a surplus 360 cubic inch V8 used in the trucks Petoskey built for military service. When the second world war ended, Petoskey was prepared to discontinue all military production. However, when it turned out that the Soviet Union was settling in the territories they took from the Nazis, it was clear they were going nowhere and the hostilities of the Cold War began. Fearing the threat of war with the Soviet Union (And a bit unnerved as several Petoskey military trucks were sold to Ivan during the war) Gordon Petoskey decided military production would continue albeit on a reduced scale. The 360 gave good service during the war and proved a simple fit for the new car. Most buyers preferred the larger V8 despite the fact that it remained unchanged from when it was designed ten years prior. One popular selling point was that many buyers were veterans from the war and often had first hand experience with the engine so most could easily work on them. A special performance version was released for a high performance model and a Police Special.

CSR50 BobLoblaw - Petoskey Indian-5.png1018x376 351 KB
This particular unit came equipped with the 360. More Indians were in fact built with the larger V8 over the Inline six which it was originally designed for. After the Korean war when it appeared that a full scale war with the Soviet Union seemed less likely, Petoskey began to shut down production of military assets, this included the 360. 1955 was the last model year for an Indian to come equipped with the V8, though the Police Special was available with the engine for the 1956 model year. All subsequent models used the 261 until the Indian ceased production in 1958.

CSR50 BobLoblaw - Petoskey Indian-6.png1018x376 384 KB
One rather obvious detail about the Indian was the lack of flashy chrome trim or other decorations common with cars from the 1950s. This was due to the financial hardships of Petoskey Motors when they entered the 1950s. By the mid-50s things had improved, however the simplicity gave the Indian a character that attracted buyers, so the car did not receive any facelift. The Indian was not only a family car, but also an early muscle car. The low price and versatile nature of the car proved popular among fleets. The Indian Police Special used a more powerful version of the 360 to give it an edge when in pursuit. In the early years the Indian was also popular as a taxi until the Tredegar Falchion hit the market in 1954.

The Indian was more than just a versatile automobile, it was the car that saved Petoskey Motors from ruin. To this day the car remains an example of what to aspire to when designing a new Petoskey. Something to haul the family around, something with a little power for those seeking excitement. (The hot rodding craze started after the war) Or something for your fleet.

Fun fact: Many women who worked in Petoskey factories during the war were offered their jobs back after the factories were rebuilt at the start of the 1950s. Petoskey was also a sponsor of the AAGPBL throughout its span and the Indian was advertised during games in its last few years.

You must be kidding me, just as I’m about t post mine you show up with same body…Oh well

trust me…we won’t be the only ones…

If you are looking for something extraordinary, the 1955 BAM Enios might be just what you are looking for. Featuring an engine with just 750cc, the lightweight sportscar offers better performance than many of its bigger rivals and the sports trim was very successful in amateur rallying.

Cheap tech and mass production parts keep maintenance managable, but how does it stand out? Well, a rear-mounted inline 6 is not something you find very often. But the car generates attention without a look under the bonnet, too: No mufflers automatically make the car sound bigger than it is.

Prices for a car in good condition start at $8100. 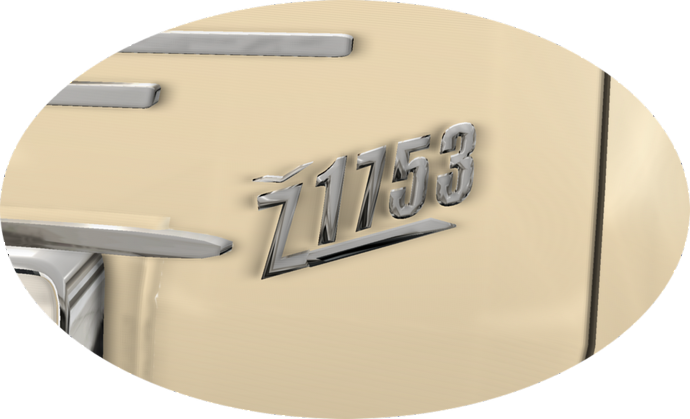 The Z1748 and the Z1753 are passenger cars produced by Italian automotive manufacturer Znopresk from 1948 to 1953 and from 1953 to 1956 respectively.
The two models shared the body panels only, but have a very different chassis underneath.
While the Z1748 was a traditional and conventional car, with more refined pre WWII solutions, the Z1753 was an entirely new model; a test bench car for a lot of technology developed during the war and never put into production, like Unibody construction, OHC head, and longitudinal front wheel drive.
But cause the shortage of the money caused by the Fiume production plant moving from the Jugoslavian controlled Istria Peninsula to the Italian Trieste industrial area, the only solution was to put the car in production was to re-use the external panels of the older model (Z1748) extensively. The work of the young Amedeo Iurlaro was good, considered the limitation of the variation possible, giving the company enough time to update definitely the car in the 1959.

The Z1753 was aimed to the italian and european middle class, a market niche still fighting after the WWII and waiting for the economic growth of post 1950’s. With 6 seats and a simple radio system was perceived as “rather prestigious” by the italian press of the time, but an real uptrim of the MY1953 was available, the Z2554, featuring premium interiors and a 6 cylinder engine capable to push the car over 160 km/h.

This model on sale is a Z1753 from 1955 with 93.000km (possible 193.000, but the odometer had only 5 digit). The car was serviced until 1972 after it was parked in a garage by the original owner.
The paint job is still the original one, but it has lost some of its shiny finishing of the 1955 (documented by sever photos of the era of this very model).
In 1963 the power steering was retro-fitted from a more luxurious trim Z2554 in a Znopresk workshop. The invoice of the era is attached along all the original documents of the car.
Before hitting the road again, it needs servicing on the engine and the brakes, new tyres, a good cleaning inside and outside, and some interior ceiling cloth gluing here and there.
Aside that, the car is complete in every piece.

ŽNOPREŠK… WE’LL PROVIDE YOU THE BEST

Scantab 3000 SV, one of the first sports cars made by the Scandinavian Automative Transport AB (later Scarab). This series of cars has its start in 1955, and was thought of as a cheaper and thus more accessible competitor to such cars as Mercedes, Alfa and Ferraris of the time.

Sure, it was not as refined, and technologically superior as those cars, but it also meant that they could produce them in larger numbers. Most of the cars ended up on the racing track tho, due to its rather preppy 3l V8 engine and good handling, after ripping out all unnecessary weight such as the radio and changing out the interior to a more raceoriented variety. Those left in original condition became semi sought after collectors cars. 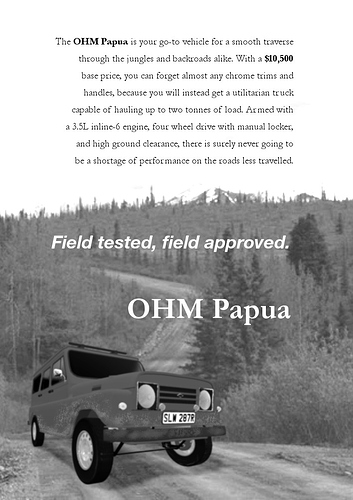 A brief history of OHM:
OHM LLC. (Oscar Heavy Machineries) started life as an OEM parts manufacturer at the dawn of the 20th century, producing spares for steam engines, factory machines and horse carriages. Taking advantage on the popularity of the first automobile, OHM also started manufacturing parts for cars and trucks such as carburetors and exhaust headers. They were famed for being more reliable and of higher build quality than their competition.

After the war, Edmund Oscar, the company owner, tried his hands on actually building their first car. Construction of the assembly plant started in 1948 and finished in 1952, but it wasn’t until another three years that OHM finally rolled out their first vehicle, the Papua. 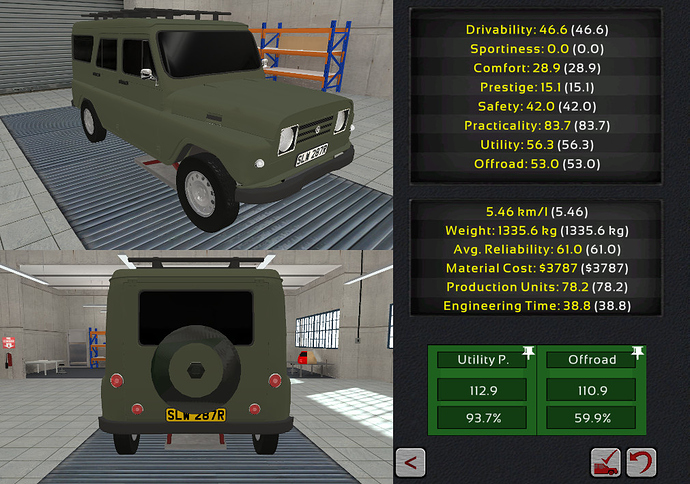 Focusing solely for heavy duty work in remote places, the Papua featured all the bells and whistles of a proper off-road vehicle mated with luxurious amenities such as a carpet and padded seats. Roof rack and spare tire on the rear hatch door came as a standard. 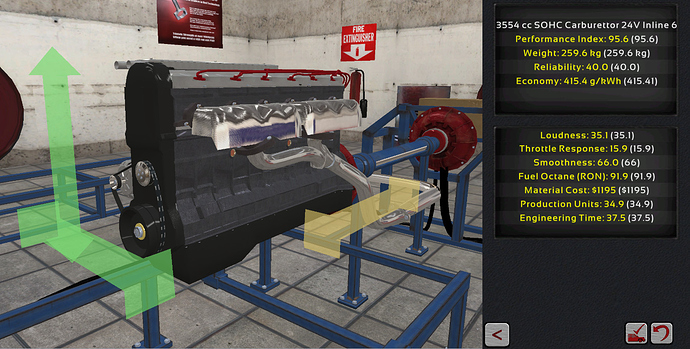 Its engine specifications, however, are pretty underwhelming for today’s standards, having only two gears and 4,000 RPM redline. The usage of 4-valve SOHC was favoured over DOHC design due to the low-revving nature of the engine and its reduced overall weight. With modified carburetors, engine compression and ignition timing, the engine can safely output up to 317 Nm without having to modify any other parts.

The SiTh design team were asked to come up with some prototypes of cars to send to the Paris Motor Show in 1955.

They came up with 2 designs…one that was dismissed once it was unveiled to the management and one that was put straight into production.

The Trident was the first sports car that SiTh produced. 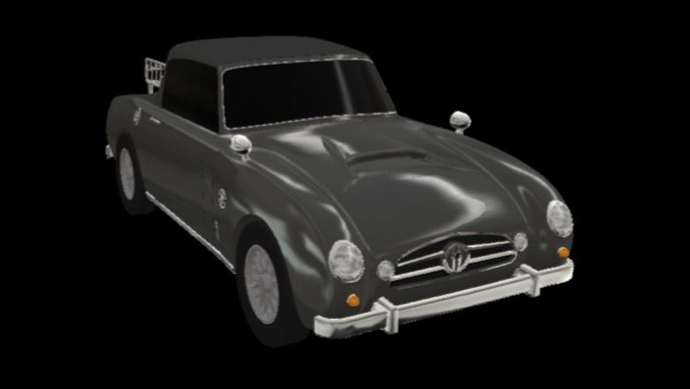 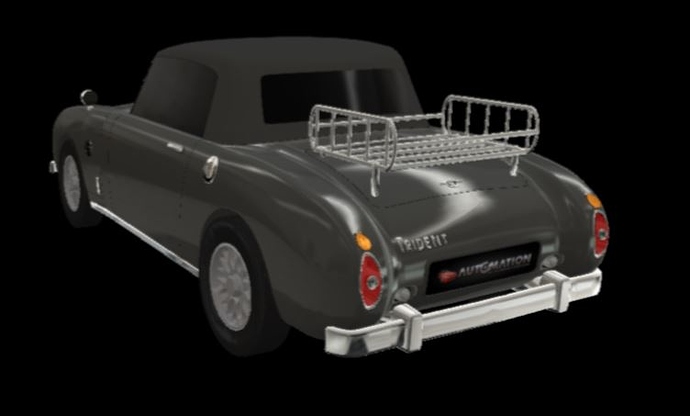 As of this post, you still have 23 hours to submit your car.

Just wanted to say that - at least from the outside - most of the cars that I’ve seen look pretty conventional so far. Considering that the prompt was basically “build a wildcard”, I’ve seen surprisingly few true wildcards

Edit: if you’ve already submitted a car, I’m willing to allow resubmissions up until the deadline. This may slow down the reviews a little bit.

Maybe I should have submitted the"failure"!!

I Think I’ll come back for this one with:
The 1955 Letto Motors Spasso, Powered by our 541cc DOHC V8 Flatplane Guzzi Engine 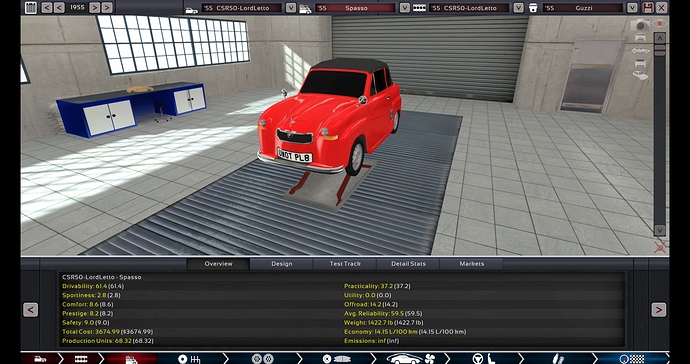 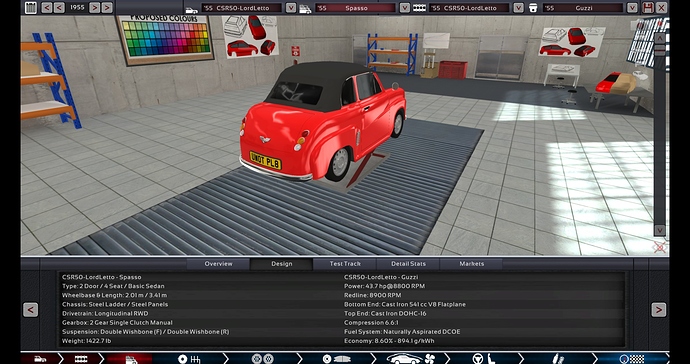 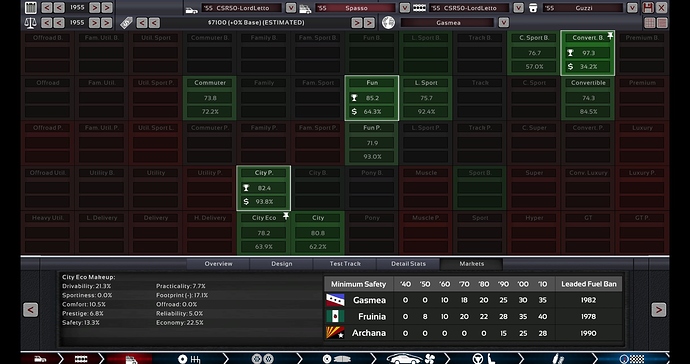 Inspiration for the engine: https://en.wikipedia.org/wiki/Moto_Guzzi_V8
I Believe this would be the Smallest V8 to be used in a CSR

Now that’s an oddball if I’ve ever seen one.

If you’ve already submitted a car, I’m willing to allow resubmissions up until the deadline (about 19 hours from now). This may slow down the reviews a little bit, but I think it should be worth it 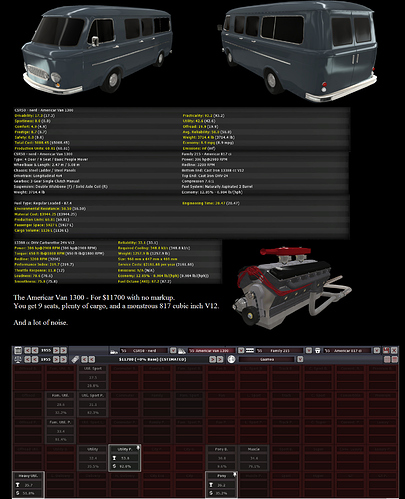 I’m comfortable with my design. It’s not really meant to win, after all. I saw an excuse to play with pushrods and carburettors, and a V12, so I did it. A jet age inspired 5 passenger premium 4x4 wagon with all the space and versatility of a van. Available for $10,400.

I’m curious what @phale actually means when he says wildcard.

It’s all in the round description