The Crowd Sourcing Competition [Round 28]

Unfortunatly it was too hard for my skills to do something good, I had 2 attempts that I abandoned ^^

Huh, I won. I would feel happy, but there were only 3 entries, so I would have been in the top 3 either way

I gotta say a horse themed movie car is about the most out there yet specific design prompt out there. I wouldn’t know what to do with it, but anyway congrats to Dorifto_Dorito and good luck…

A worthy winner! Would probably watch the show just for the car if I was a 70s dude

Sorry for the delay, currently in the process of moving out of my apartment. 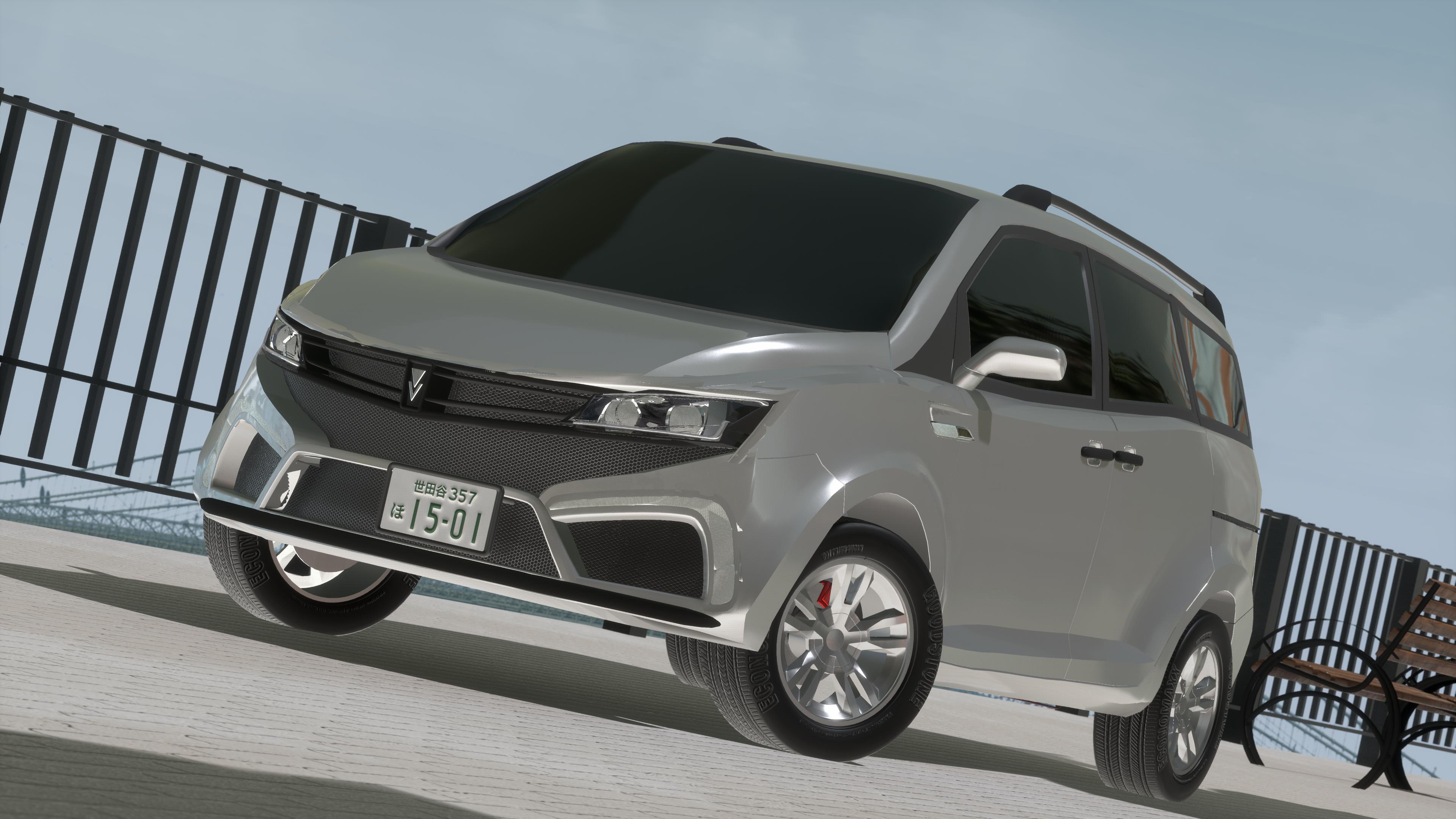 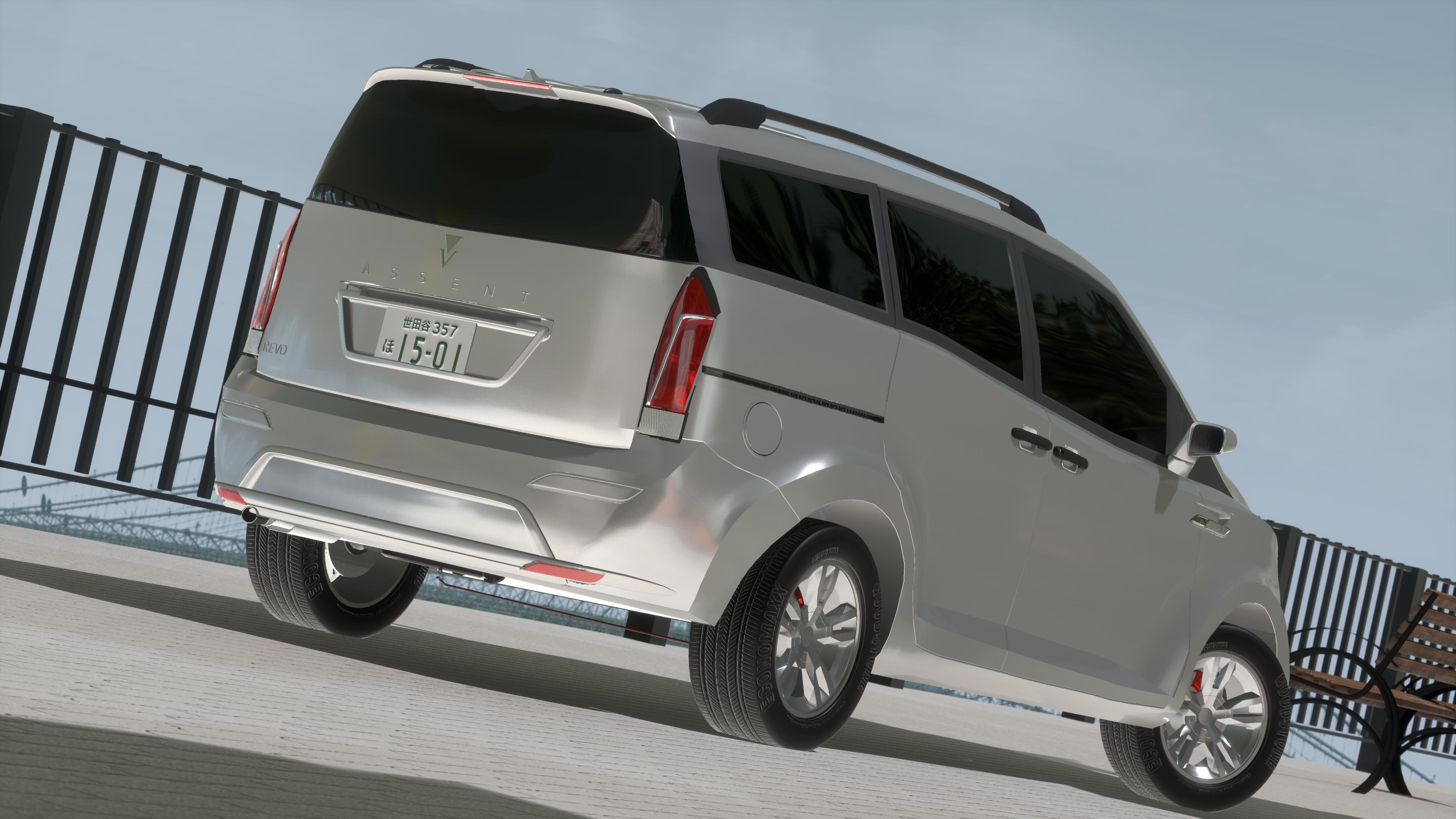 This is the brand new Nohda Assent Revo. It may not look like much… but that’s because it isn’t much. It’s a basic MPV based on a sedan platform with boring old styling. However, since it is based on a somewhat popular sedan, mods for it are readily available making it a popular car for tuners who need to haul around their entire family. As such, body kits for this car are in demand and as body kit designers, you need to deliver.

Your task is to redesign this car to make it look like it has a bodykit.

Here are some examples of what I’m looking for.

Naming convention ofc is the standard.

CSC 10 - Nohda Assent Revo 5 2 Base.car (51.7 KB)
Yes the base model is already named CSC 10, just for you people who can’t use the correct naming convention

Note: Make sure to clone this car. If you don’t there is a chance you entry may get overwritten if someone makes the same mistake

I am using the Open Beta version of the game. It is best if you use the same for your entry, though if you are using the stable build I would assume it should be fine. Just be aware it may affect your entry.

Entries will be accepted on the 20th and the deadline will be on the 27th unless further stated.

If you have any questions/alterations you want to make, please list them down below. Good luck and have fun.

Let me introduce myself, my name is Kento Yokohama and I own Kento Works Body Kits. I live in California. But recently, my brother back in Japan asked me to make his 2018 Nohda Assent Revo look unique. So, I 3D-scanned the car and made this. Here is what I’ve done: a completely new headlight unit (wider than standard), new front-fenders (to accommodate the new headlights), fender extensions, new front bumper with a new front splitter, new side-skirts, rear diffuser, new rear bumper, new muffler, new roof spolier, coilovers and new rims. Oh, and also the Hakka front rally lights and taillight extension. He bought this MPV because he has a family. My brother begged me to keep this as a one-off. However, I convinced him to give this body-kit to Sprocket Hound. Otherwise, I will make this for my bussiness and make money out of it. I hope you like it. Enjoy…

Oh and before anyone asks, after the 20th, No resubmitting allowed. Thanks.

We at Kazawa Tuning got bored and f r e a k y, so we decided to make an extravagant bodykit for the Nohda Assent Revo. We completely changed the front end with a stylish front bumper with chrome accents and lip kit. We added chrome trims around the sides and a small lip extension skirt. The rear now gives off a very sporty and menacing look, with a diffuser, side lips, twin exhausts (one is fake don’t tell the public), and a chrome accent. Chrome rims accompany the bodykit. With our bodykit, you can rush the kids to school in style, and properly carry you and your friends to the local fishing spot with class!

Cerberus Styling House are a British aftermarket tuning manufacturer located in Leeds Centre. Keeping up with the trends, they accepted the challenge from Sprocket Hound, and re-styled the Nohda Assent Revo with their own unique taste, presenting the Code X Black Edition. The full “Code X Black Edition” bodykit is complete with a front bumper, side skirts, front and rear door panels, rear bumper and diffuser, bonnet, and aero wing. On top of this extras like the headlights and taillights were completely re-done with projectors and LEDs at the front, and a rather throwback semi-whiteout at the back. The badges were traded out for Cerberus’ own trim.

Optional extras featured on their demo car include an upgraded intercooler, front splitter day-time running lights, Black edition front grille, Black edition bonnet and side trim (flowing along the bodylines) and completely re-trimmed parts like the rear boot lid and side mirrors as well as a boot paint guard in Black Edition colour. Boot and door decals were included on the demo-car giving the car an even more enhanced, individualistic look.

Check here for the deadline

Last few hours before this round closes. If you haven’t sent your entry in, do it soon.

Check here for the deadline

I have yet to receive an entry from @Kyuu77. If you want to send it in, send it in now. 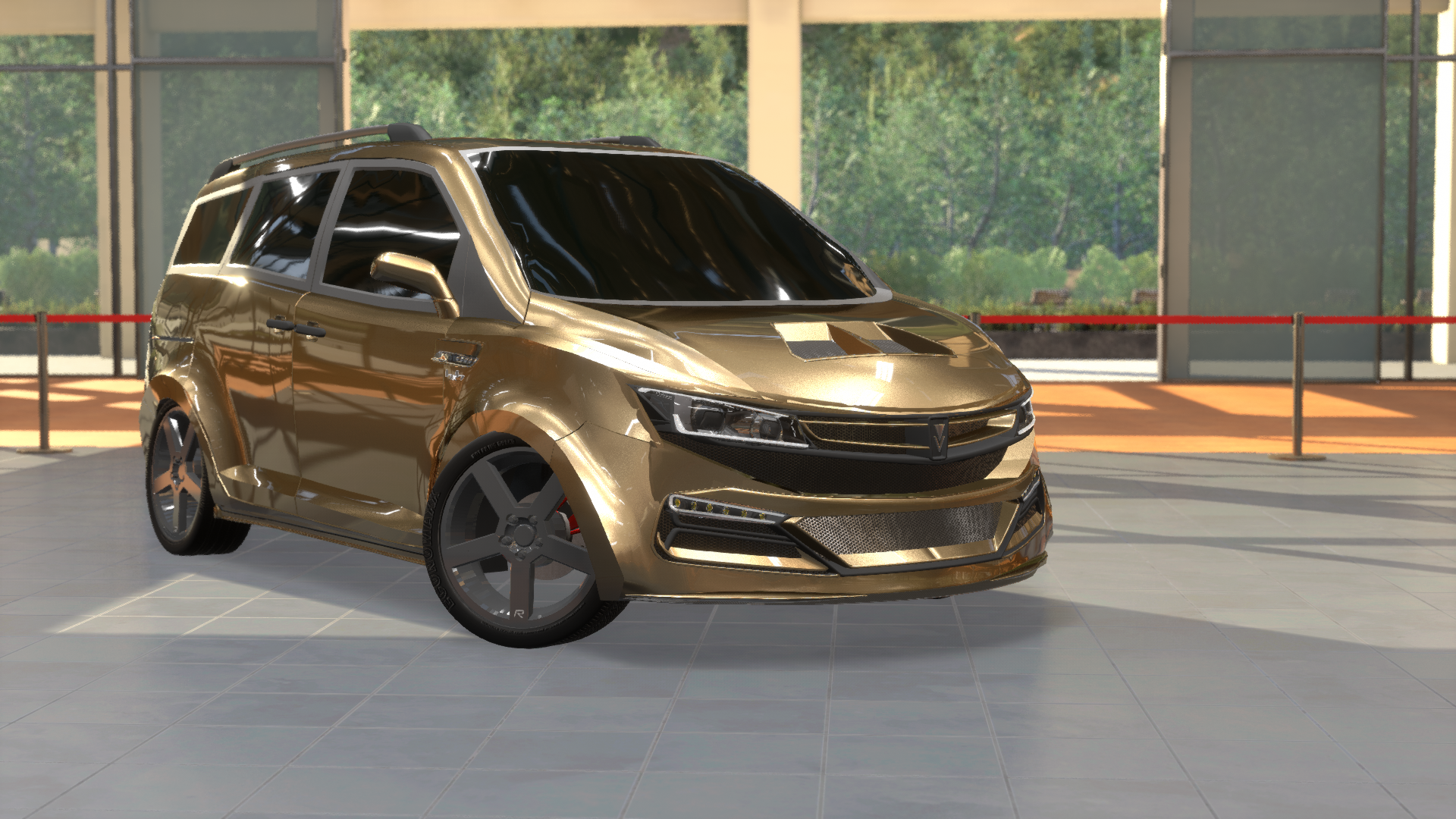 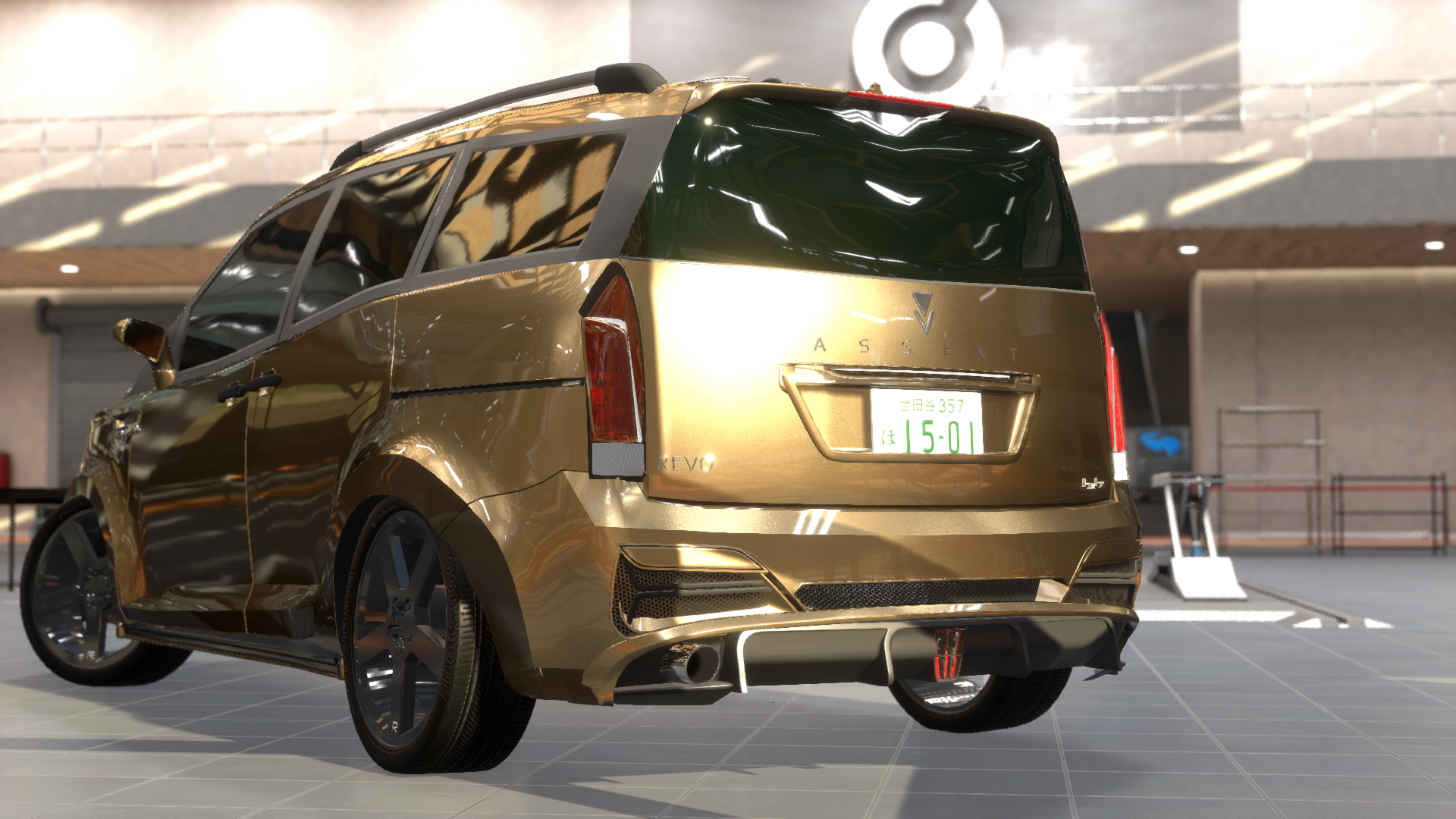 Entries are now closed and have been for half an hour

Any entries sent in now will not be accepted

There were only 8 entries so no point in delaying the results… also sorry for the bad screenshots. That photoscene has some strange shadows.

Nakamiura looks at the calendar on the wall. June 27th. Tomorrow he’ll be 74 years old. He pondered how fast time flew by. To him, it was only yesterday that he was 20. But he knew he wouldn’t be long for this world. Years of smoking had taken its toll and deep down, he knew he had to find a protégé.

Suddenly, his assistant walked in.

“Ahem, Mr. Nakamuira, we’ve received the entries from our challengers.”
“Oho, interesting. How many answered our challenge?”
“Eight in total”
“Only eight? Well, what are we waiting for? Let’s see them then.”

The first car on the block was the Kento Body Works Assent Revo.
Upon first inspection, the design looked solid and consistent. Nakamiura noted how the body kit made the car seem more aggressive without changing the look of the car too much. However, on closer inspection, it was noted that the polish wasn’t quite there.
“Hmm looking from afar, this car looks quite nice. But even from here I can see that the front bumper hasn’t received the same amount of polish as the rest of the design. It’s a shame really, a bit more polish and it would be perfect.”

The next car to be seen was the KGB Works Assent Revo Daikoku.
The first thing that Nakamiura noted was that it was certainly unique. The body kit pretty much changed the entire front end, with the exception for the headlights which just seem to be slightly modified. That being said, Nakamiura wasn’t too interested in the redesign. He noted that the design overall wasn’t very consistent, with the front and rear bumpers looking like they came off different bodykits and that the polish just wasn’t there. He did appreciate the colour though.
“Why is there a crease on the driver side door but not on the passenger door? This car just lacks a lot of polish and a lot of consistency. The only thing consistent in this design is that there are LEDs everywhere.”

Kazawa: @Boiled_Steak
The next car on the block was going to be the Kazawa…unfortunately the car hadn’t arrived… (OOC: I did say make sure to clone the base car otherwise your entry will get overwritten. In this case it was.)
“That’s a shame. From the pictures I saw, the car looked very nice.”

Up next was the Treadkillers Assent Revo.
Nakamiura loved it. It was pretty much everything the Kento Body Works was much more refined and with the polish that the Kento Body Works Assent Revo needed. And it was in a stunning Midnight Purple. The Treadkillers were even kind enough to tune the engine a bit. Regardless, it wasn’t without some flaws.
“I love it, but those DRL/Foglights on the front bumper are a bit thick. Also, the rear bumper doesn’t give off the same vibe as the front which is a shame. I wish they had been more aggressive on the rear.”

GSR: @kobacrashi
Unfortunately, the GSR was another no show…(OOC: Again as I said, make sure to clone your entries.)
“Another no show? What a shame, I would have liked to see more of it in person as opposed to the photos.”

The Cerberus Assent Revo Code X Black was next and oh my. When Nakamiura saw it, his jaw dropped. Never had he seen work as good as this. He was amazed by the design and mesmerised by its details. It looked consistent and cohesive at pretty much all angles. The pinstriping and decal work was some of the best he had seen in his many years of work. “My god…this is a work of art. It looks amazing…that being said, if I had to critique it, those DRLs/foglights are too small and look out of place on that giant vent. Other than that, I have no complaints.”

After such a stunning car, Nakamiura thought there was nothing that could top it…that was until he was shown the next car, the Assent Revo YellowStun. Sometimes simplicity can match complexity, and in this case, it certainly did. While not as jaw-droppingly detailed as the Cerberus, the YellowStun was a beauty in its simple nature. The lines were clean and crisp. Sure, the Cerberus was a more visually stunning car, but the understated nature of the YellowStun makes it the dark horse in this competition.
“I have no words for this…its like antithesis of the Cerberus…”

Last but not least, the Assent Revo BXB. It was a very unique design, keeping most of the front fascia while updating the lower fascia. This, however, did mean that there was a bit of a jarring transition between the two in the front. Round back, the rear bumper fit much better compared to the front end. Detail work wasn’t too bad and the design had decent polish to it. Unfortunately coming after the Cerberus and YellowStun, it was kind of overshadowed.
“It’s a nice take on the car. I think had the front been adjusted more to fit the redesigned lower fascia it could have done a lot better. The rear end is also quite nice.”

It took Nakamiura about three days to ponder over who he would chose to be his protégé. Over that time he had looked at every detail on each car. Looking for imperfections and whittling the results down to just two. But he knew he had to make a choice and that would be…

We, at Kazawa Tuning, are sad to announce that the van has been stolen and is now nowhere to be found so it was unable to reach the destination. It’s not a huge surprise for us since our cars get stolen often but hey they’re not getting far in something like our van. Apologies to Mr. Nakamiura.