Background: Ken is a Tuuklandian ex Formula 1 driver who gambled away most of his earnings. He is not exactly poor but he thinks his 8 year old son Joni has potential to become a good racing driver, so he’s trying to find any way he can to ensure his son has the best possible future. Being the risk taker he is, Ken decides to try this race.

Car: 1986 TM Potatismos 5d 4WD
The 4th generation Potatismos was available in front wheel drive and four wheel drive but even the highest spec trims had weak engines. This one has an engine swap from a 5th gen Potatismos R Turbo making it a 228 hp sleeper that accelerates from 0 to 100km/h in 5.6 seconds.

Yes, been using that name for cheap hatchbacks since forever. Reasoning behind it being that the cars are a bit potato-y although they are also entry level hot hatches (hot potatoes!), and also for the lols.

Why are they taking part in the GAR?: Ellsworth doesn’t need the prize money, he’s in this purely for thrills and glory. Though, I’m sure he can find something frivolous to blow 5 million on if he wins. 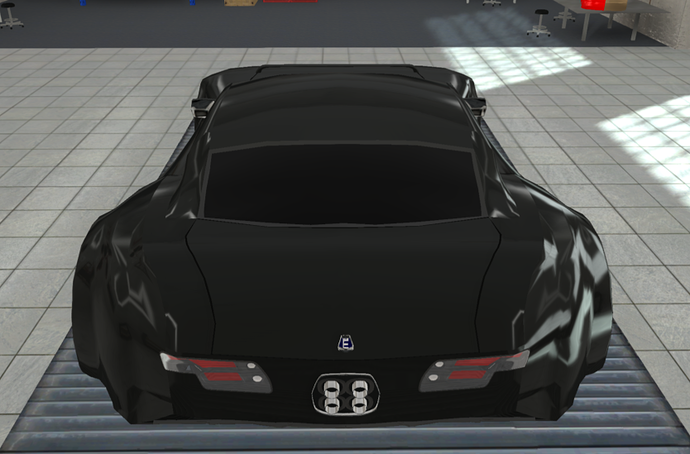 Name: Sam Smith
Age: 38
Background: Producer of straight to DVD movies with plot-lines revolving around street-racing. The third film is currently in the early stages of filming and so Sam decided to use the Great Automation Run to collect authentic sound data and inside/outside shots of high speed action.

Sam is car enthusiast, Socialist Libertarian and is currently single despite his many attempts to woo the starlets who feature in his films but remains positive he’ll find his soulmate soon.

Why is he in the GAR?: Simple really, $5 million dollars will lift the budget into the decent film category and see “Angry Angus” achieve box office success! 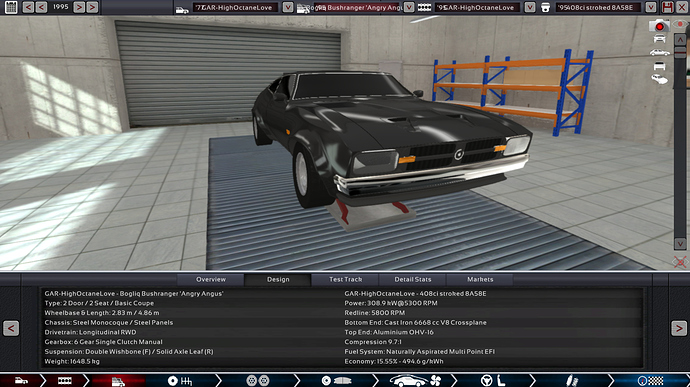 Name: Ben Smith
Age: 30
Background: Brother of Sam and the “Star” of his movies. He’s also the mechanic so he keeps the cars in the films from grenading themselves trying to keep up with Sam’s creative vision!

Ben hates cars but loves driving and he knows he is going to miss his lovely wife of 10 years and their 2 sons as he travels about Europe at breakneck speed. A dyed in the wool Social Democrat, Ben’s looking forward to seeing one of his brothers films actually sell well, which will allow him his dream of owning his own home…

Why is he in the GAR?: 50% driving holiday, 50% work requirement. Ben’s coming along for the ride! 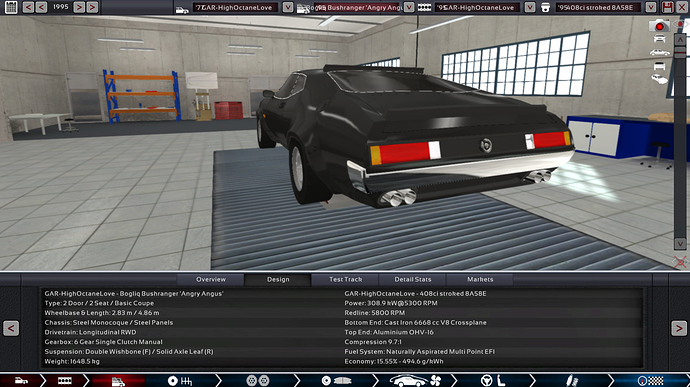 The car: The car chosen to star in “Angry Angus: Irritation Road” is a heavily modified version of a 1977 Bogliq Bushranger Veloce.

Essentially a licence built XC Ford Falcon hardtop, the Bushranger packs a 351ci Cleveland V8, makes about 165Kw and is a handful to drive anywhere where there’s a corner.

The Bushranger has been extensively modified with aftermarket alloy heads and stroker kit being sourced to stretch the engine out to 408ci. Multi-point fuel injection was installed using a Leeroy Racing kit and the cam was replaced with a Bathurst specific grind so that there would be a wide spread of power without stifling the top end. Quality extractors were installed to a dual pipe, crossover exhaust system which exited at the rear of the car via two twin pipe cannon mufflers. Power has been massively increased to 308Kw and the gearbox, tyres, brakes and suspension has all been modified to cope with the massive increase in power.

Best of luck to all who enter because regardless of where you end up, you’re likely to find yourself immortalised on film!

Please tell me there’s someone in the cast that looks like Steve Bisley… or at least a “Bill Hunter in a pub” scene.

At OMG we like to experiment, we like to stand out, and sometimes we do things a little oddly. When we heard about an illegal race across Europe we knew we had the perfect opportunity to test out our new economy sports car! We believe our new car to be the best bang for the buck, but not because of how it comes, but because of what you can make it. This car is made to modify! To prove it we built a one-off race tuned version specifically to run in this race. Then we called our driver for hire, Frank Martin.

Background: All we know is he loves to drive, as long as there is a seat, a steering wheel, and body that isn’t a total death trap, he’ll drive it to its limit!

Why are they taking part in the GAR?: Because OMG needed a driver.

The eco base model of the OMG Canny: 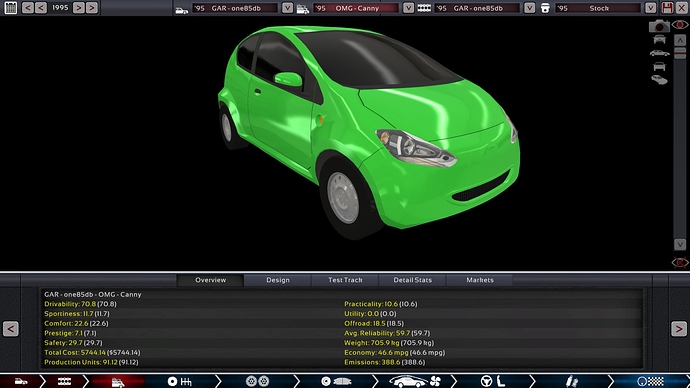 Frank will be driving the one-off R version:

Producer of straight to DVD movies

In 1995? The DVD format was introduced in late 1995 and definately wasn’t immediately used in cheap stuff like direct to dvd releases. It would be VHS at the time.

So… they put +15 tech points in storage media and got DVDs before anyone else?

The R version has an engine swap, so it’s not as economical, and the handling has been drastically increased, while driveability is a bit lower and sportiness is much higher. I’m hoping this will be interesting as well!

In 1995? The DVD format was introduced in late 1995 and definately wasn’t immediately used in cheap stuff like direct to dvd releases. It would be VHS at the time.

The point wasn’t to describe the tech available in 1995 but to accurately portray just how small time the brothers are in the film industry… As in really, really small with a meagre budget! (The films do get displayed on the big-screens, but usually at small, Indie cinemas.)

But for timeframe accuracy’s sake, yes Team Angus is headed up by a straight to VHS filmmaker.

Let’s just hope they want plenty of inventive swearing, because if they’re anywhere near Marcus, he’s likely to let 'em have it.

I’m still trying to figure out lore for mine. I’m definitely not winning on performance though.

Alright, it’s been a while since I’ve done a challenge like this, and I need a bit of a break.

The Scagliati 330 was a two-seat luxury grand-touring coupe and convertible built by Scagliati Motori SpA of Mirano, Italy, from 1962 until 1969. 330 production was split between two basic models; the GT series (coupe) and the Turismo (convertible, both hard and soft top). Powered by the company’s famed Mirano V12 engine, appearing for the first time in the 330, the Mirano appeared in both Uno and Due versions; the single-cam Uno engines being produced from 1962 until 1966, and the twin-cam Due from 1967 not only until the end of 330 production, but also until Mirano engine production ceased in 1996. In the 330 Turismo, the 3956cc engine produces 386 horsepower at 7100 RPM, good for a 0-100 km/h sprint in 5.3 seconds and a top speed of 267 kilometres per hour, making the 330 one of the fastest cars in the world at the time.

In total, 571 330s were produced in all body styles; the overwhelming majority of these being 330GT, 330GTC and 330GTO coupes and racing cars. The Turismo, which cost $16900 when new (an outrageous price in 1967), accounted for only 48 of the total production run between 1967 and 1969, and is widely considered to be one of the rarest and most desirable Scagliatis ever made, with a 330 Turismo selling at auction for $3.5 million US in late 1994. This particular 330, serial number 471, was recently restored by the Scagliati Museum in Mirano, having been in the collection since it was donated by Amadeo Scagliati himself in 1976.

For this challenge, the 330 Turismo is essentially unchanged from its original production spec, with only modern seatbelts, brake pads and tires making up the chassis modifications, and some minor work on the engine to run on unleaded gasoline and to boost reliability.

Christoforo is part of the famed Scagliati family, his grandfather Amadeo founding Scagliati Motori in 1948. While the Scagliatis no longer have a role in the day-to-day operation of the company, having sold a majority share to the CMW Group in 1988, they still maintain a large ownership stake in the company regardless, and hold positions on the supervisory board as well. Christoforo studied engineering at the famed Politecnico di Milano, and also recently completed a master’s degree in business at Columbia University in New York. He is also responsible for curating the Scagliati Museum, showcasing the family’s extensive collection of historic automobiles.

Pasquale is the head mechanic at the Scagliati Museum, and is an accomplished amateur rally driver in his own right. His family has had a long association with Scagliati, with four generations of Zoccaratos working in the factories and in the engineering offices alike. Participating in the GAR was in fact Zoccarato’s idea; pouring through the records of 330 n.471 during its restoration, Pasquale found that old man Amadeo, ever the showman, had participated in several such events before with this car. It is only fitting then that the GAR would be a suitable christening for the restored classic.

Name: Catherine Erin
Age: 53
Background: The wife of then-CEO Marco Erin and fellow car enthusiast, Catherine was born in 1941, during the Second World War and grew up in Thetford, Norfolk. An aspiring journalist, she worked her way up in the British newspaper industry, before meeting Marco at the 1969 12 Hours of Sebring, and saw him on and off for the next couple of years. It took a while, but they married in 1975, before raising two kids all the while Marco was head of Erin. Come the 80s, and she turned her focus away from journalism to pursue a career in domestic living matters and cooking.

She’s bringing her longtime friend and cocktail-lover Julia Deacon to be her co-driver, who also happens to know Europe rather well.

Why are they taking part in the GAR?: It’s a good excuse for a tour of Europe and a nice grand touring holiday. And a chance to driver her beloved 1989 Scandanavian Blue Erin Scarlet S… 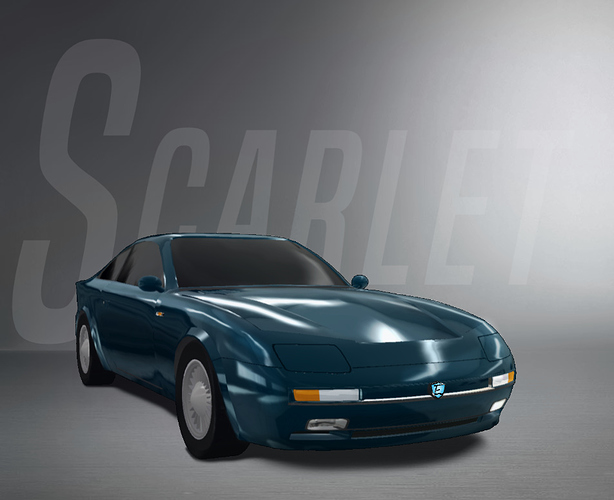 The Car: A Mk 1 Erin Scarlet S, with the standard 3.0l i6 and a 5 speed manual. It’s been well serviced and given an air-fuel remapping to make it a bit more efficient.

This isn’t a super fast, super tuned car. It’s a well looked after example of the 80s sports coupe. Don’t be fooled though, Cath and Julia are in it to win. But they’re also not avoiding the chance for go for a nice drive across Europe…