I have tried to make a track by using windows paint and I used a random .lua file but it does not work. Can someone teach me how to properly make a track?

This thread shows the basic concepts of building a track using a LUA file:

How To Build Custom Tracks

This thread shows how to use the original online track editor:

The concepts used in the first tutorial apply to both Track Editors. The visual concepts are the same for both editors (with some minor function differences and visual layouts). If you have a specific question, ask it here or in either of the two threads above.

This editor makes it possible to do tracks with unprecedented complexity! Thanks for upping BitTwiddler, you can expect to see some really gnarly passes from me in the coming months.

As I was just saying on cobaltgirl07’s tutorial thread (oops!), I had a few additional suggestions and requests.

[ul]]The camber signs are the wrong way. I got very confused when what I thought was good camber for the corner significantly slowed down my entry into the corner, until I realised that the simulator’s negative camber means camber to the right, and positive means camber to the left. The little sign on the interface gets this the wrong way around, and as a result I became confused as to why my cars appeared to be falling off the track!/:m]
]Is it possible to have a mode that preserves the raw elevation of segments as opposed to their gradient when rescaling? It’s a pain in the ass to fix the elevations then have to go back and fix them all again after rescaling the track to make it the right length./:m]
]I think you mentioned you were already going to change this, but the 2nd segment upper bound of 20000m can potentially get in the way (it caused me a few headaches doing pikes peak lol)/:m]
]Could we have an undo button please?/:m]
]Can the colour of the simulation line be different from the segment markings and numbers? All of this is really to avoid messes like what you can see here:/:m][/ul] 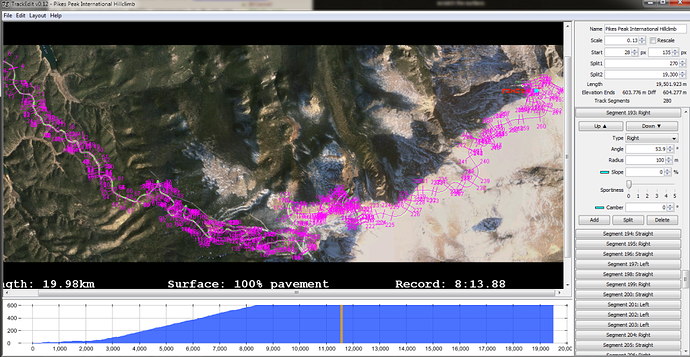 Yeah, busy with classes so this stuff has taken a bit of a back seat to that.

I already planned to do a zoom feature.

Undo is never a simple feature. It just seems like it should be simple because ever program we have now days has it. But I would basically have to entirely rewrite the backside of the program if I want to do it (at least correctly). Which would push other features, such as zoom, simulation view, and anything else I have planned back.

Fixing the upper bound is on the to do list as well.

Are you saying that my camber image is backwards, or that I should reverse the sign when I go to read/write the lua file?

I guess I can also add a configuration menu so you can choose the colors of the on screen bits (lines, segment #, splits, track start/end).

I am also thinking about adding a projection line after the last segment so you can see where it would go (which would make curves easier to do).

I already do the projection line by adding a segment and clicking back to adjust. So I like the idea, but some caution… It is very helpful, but I wonder if adding it automatically might confuse some users. Since I add it myself, I know which segment I’m looking at already. Configuration menu would be super awesome though! And the zoom, of course, would be awesome too. I remember you saying you were going to be working on it. I only mentioned it because it was mentioned in my tutorial thread by strop, but he left it out here.

Are you saying that my camber image is backwards, or that I should reverse the sign when I go to read/write the lua file?

The former. Also, the description, therefore, is also backwards. But the way the game parses it is correct!

It would make things easier to have the camber in the editor match the camber in the lua, which it currently does. However, the visual cue we get from the sign is misleading, so I reckon that’s what needs to change

The next version will probably be out tomorrow. It will have new/save as, projection line, a settings file to configure track coloration, camber fix, split fix, and a camber reverse function (for all those tracks it is broken in because of my editor). The only blocker at the moment is save as really. But that’s mostly only because I don’t want to have to wrestle with JFileChooser right now.

I realize that if I want to do anything fancy with the elevation chart (like click to select a segment, or rescale it for zooming), I will need to replace it with a home grown version.

The lucky 0.13 version of TrackEdit is out.

Changes
[ul]
]Can now create a new track. When saved, ti will save a copy of the rendered line as the image. You for the moment have to replace it yourself. (I’ll add an UI later to allow you to select one to replace it)./:m]
]Added the ability to flip all the cambers on the track, just in case you used an older version and got them messed up because of /:m]
]Added a projection line, so you know where your track will end up. This is not a track segment, it is just a guide tool./:m]
]The program now creates a “trackedit.cfg” file. In the file you can configure the colors the program uses (i’ll add an UI to do let you do that later)./:m]
]Fixed a bug where the launcher executable didn’t work in paths with a space in them (whoops! I feel dumb!)/:m]
]Fixed upper bounds on the split time, the new upper limit is 1000 km. IF you have a track longer than 1000 km… well let me know, and i’ll put some effort into removing the cap entirely./:m]
]Fixed the camber helper image./:m]
]Fixed a bug that kept helper images from sometimes updating./:m][/ul]

A rough to list in no particular order of what I need to do next.
[ul]
]Add options dialog (for colors and whatever else)/:m]
]Split some of my view/controller stuff into separate files/:m]
]Zoom feature. Even just stretching it ugly like (NN) is a bit involved, since I have to resize and recenter the canvas and track zoom level and so on./:m]
]Home Grow an elevation graph, so I can allow selecting and zooming in on that as well (not the same kind of zoom as the image). Maybe just make it wider after a certain number of segments to keep it from becoming useless./:m][/ul]

I can maybe allow a naive version of undo, which just keeps a copy of the entire internal state. But this is both lazy (thus possible) and a massive memory hog. Let me know if undo is a really big deal for you. So to have 1 undo state, the memory usage would double. To have 5 undo’s the programs size would increase by 6 times, and so on.

Preserving raw elevation rather then the ratio is a bit problematic. Since if you scale a 100m high segment from 200m to only say 20m, well i’m not mathematician, but 20m < 100m. Which isn’t happening. But even in the case of reducing a 100 m high segment from 200m to 100m means that segment turns from a 45 degree slope into a 90 degree wall, which isn’t supported by the track format (it would be infinite percent tall). If you can think of a nice way to handle this so that these kind of problems don’t occur, please let me know, and i’ll consider implementing it.

I said I had intended to open source this, and I am true to my word. I am actually a little bit behind in doing so.

You can now fork, edit, push, pull, or submit bug reports for the editor.

The code is far from the cleanest and I still use ant (I haven’t gotten around to learning maven, sorry). But its very permissive.

I think I have left things long enough without an update, so here is one for you.

It’s a pretty small update, but I hope it will work better for correcting your tracks.

Changes
[ul]
]Changed default location for looking for tracks to the Steam version of automation./:m]
]Updated the simulate layout mode based on information given to me by Der Bayer (which I cannot share, so don’t ask)./:m][/ul]

The previous todo list still applies. I just wanted to get this out of the way. It’s still pretty rough, and it uses straight lines for curves currently until I get around to adding my clever fix for the curves, but it should be a lot more accurate now. That is unless I misunderstood, incorrectly implemented some part of what I was told, or what I was told was incomplete. Which I will assume is the case until I get evidence to the contrary.

[quote=“BitTwiddler”]I think I have left things long enough without an update, so here is one for you.

It’s a pretty small update, but I hope it will work better for correcting your tracks.

Changes
[ul]
]Changed default location for looking for tracks to the Steam version of automation./:m]
]Updated the simulate layout mode based on information given to me by Der Bayer (which I cannot share, so don’t ask)./:m][/ul]

The previous todo list still applies. I just wanted to get this out of the way. It’s still pretty rough, and it uses straight lines for curves currently until I get around to adding my clever fix for the curves, but it should be a lot more accurate now. That is unless I misunderstood, incorrectly implemented some part of what I was told, or what I was told was incomplete. Which I will assume is the case until I get evidence to the contrary.[/quote]

I think they are planning on implementing a new track editor into the game at some point. From the sound of it, track pathing is going to change in a future update, and will require all previous tracks to be adjusted accordingly unless I misunderstood something.

Fair enough, but until then, I’ll continue to support this tool.

Awesome! I just didn’t know if you were aware yet. It is great that you made this version and are updating it still too. Thank you for all of your efforts.

I’ve just downloaded this today but I can’t seem to get it to open, can someone help me out?