“Isaac… short pause … can you hear me Isaac?”

“Have you been briefed?”

“Yes, control. I was told I’ll be dying soon”

“What? Long pause… What are you talking about Isaac?”

“I was told that I’ve been commanded to head towards the desert and the forests to collect ore. Failure to do so would result in taking away my license to breathe oxygen. And going towards those lands has been proven pretty much fatal anyway. So yeah, in short, I’ve been told that I’ll die”

“Why not just straight up say that we’re murdering you because you couldn’t carry out a few silly errands of ours, control? Why the bullshit approach of saying you won’t be able to breathe in the oxygen we serve you anymore?”

“Isaac, I know you’re pissed. I know this doesn’t seem right. But the higher ups are afraid, they really are. We’ve been running low on resources for years now. The only reason we have had enough supply of electricity and resources to mitigate our low production of them is because of our deal with Sterling City…”

“And I’m guessing Sterling City turned their back on us? How many people know of this, control?”

“So I’ll be travelling towards the massive desert that has remained unfathomed for years since that last… incident, to collect ores only found in the desert biome, and then travel further North towards the dark forests, which are now ridden by those failed bionic humans and animals experiment things, to collect Eternalynium*. I’ve been given, what seems like, sparse arms supply. And most importantly… I’m going lone wolf. Do you guys actually expect me to return alive or do you just want to kill me off… for whatever reason?”

“Isaac, you must understand that we can’t just let anyone know of this! You are an elite officer of the higher ups, who has had years of experience behind the wheels and has scoured through these deserts and forests back in the days”

“Back in the days, control, now things are different. You guys have only made things worse, while promising a better future. Look where we’re at now! Thriving for resources and giving everything our last shot because the only other option is death of a whole city! This is not what we were promised, control. We can’t even let the citizens know of our situation because that might cause mass hysteria and riots and chaos. The people have endured enough, the last thing they need is a little push, to completely lose their minds and start killing each other off to survive”

“I know… Isaac. I know. But our city is in great danger, and we need your help.”

Another period of long silence*

“Just give me my fucking vehicle already control, stop delaying my operation. And how would I even carry enough resources in my vehicle to power an entire city?”

“About that, Isaac, your standard issue vehicle was deemed unsafe for this operation. So the higher-ups have decided to offer you a new vehicle. Something more sturdy, more able and most importantly, something that can keep you safe inside it. As for carrying the resources. Once you collect as much as you can carry, return back and drop them off around a pick up point where our drones can pick them up.”

“Well at least they’re trying to preserve their manpower this time, instead of you know throwing whatever they have away like they have an infinite supply of everything? And what piece of shit drones have you crafted in the last 10 years that they can’t even cross a few hundred kilometers?”

Well, you’ve read the premise. Some well renowned studio is making a movie featuring a character named Isaac, a veteran elite officer, who has been given the duty of collecting resources from dangerous lands and beyond in order to collect resources to save the city from falling into bits. The movie is being made in 2020 and will be released next year. So the year of this challenge is 2020, however the aesthetics should be matching with something that goes with 2050.

Now they’re looking for a design studio that can design an offroading vehicle that looks on par with the timeline. Your job, as a designer, is to design a car that follows the aesthetics of genres like:

You could go for either one of them, or you could do a hybrid mix as well. Whichever you find suitable is fine. Going Retro 80s futuristic is fine and so is going bat-shit crazy Cyberpunk 2077 style futurism as well. It’s all about how you interpret the future might be.

I won’t be directly saying what kind of stuff to aim for or what stuff to add to your entry. I will however provide a certiain guideline to follow.

That’s all I’ve got so far. I’ll wait for the response. Do you think there are some things that I need to improve or state clearly? Is anything missing? Let me know!

I’ll wait 24 hours or so and if everything’s fine by then, I’ll set a deadline of… 10 days? Should be enough to design a futuristic offroader from scratch.

Submissions are open!
Submission deadline is 29th Jan 12 AM, GMT 6

I’m Extending the deadline up to 7th of February 12 AM, GMT+6 (due to CSR/CSC pressure mostly)
Have fun! And one more thing, RESUBS are allowed

Added a pic of the Warthog

This brings to mind CSR88 - but with a strictly off-road theme. Mad Max meets Back To The Future, in other words.

Coincidentally… you guessed exactly what my inspirations were for this round, alongside Cyberpunk 2077 and a little bit of GRIP (the game) as well. Educated guess though, I must say

Aren’t you forgetting someone? 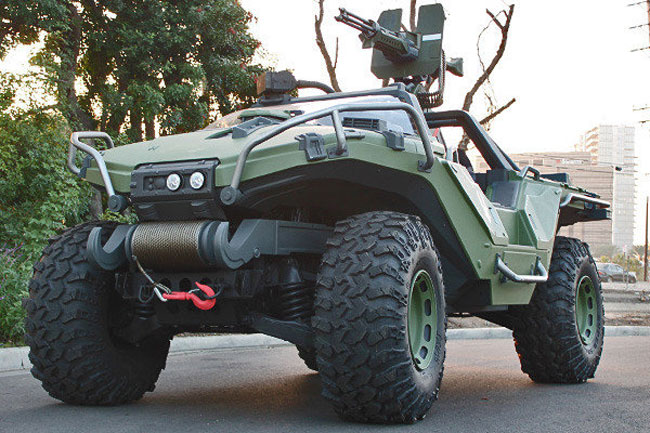 Oh man, I mean, if you can recreate something like the Warthog in Automation, go for it! I’ll gladly accept it

Edit: If it wasn’t clear, I’m open to a wide variety and range of submissions

So who’s using the Cybertruck body?

A few things about the technical judgement of this round:
I will be mostly looking at only 3 stats ( Price, Drivability and Fuel consumption only if it’s stupidly high ).

If you’re using a body that’s not really kind to one or more of those stats, I might give you a pass just don’t try to abuse it.
Drivability is good as long as the figures don’t drop below… Idk 20?

You can make the tyres as huge and chonky as you want to match the look of your car. Yes yes I’m great now with that I’m off to bed again.

PS: try to make a decent engine I’ll deffo look at the engine

Forgot to announce but… Submissions are open!
Submission deadline is 29th Jan 12 AM, GMT 6

First to send… nice… I’ve been working on this ‘car’ basically non-stop since the Challenge was posted.

Someone has been skipping the Axle day, eh?

Are you asking for a 6x6 RiftVhaun @ST1Letho?
or you noting the Game for not scaling bits relative to size.

An all-terrain, all-weather combat transport vehicle… And yes, it has machineguns coz why not?

DVM Pathfinder
It can go fast, offroad, and consuming less fuel than your Ford Fiesta. And we can certify its *mostly bulletproof 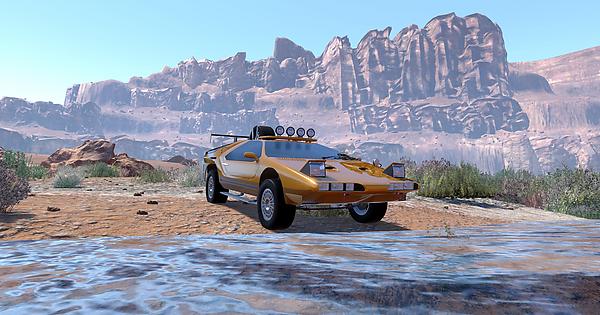 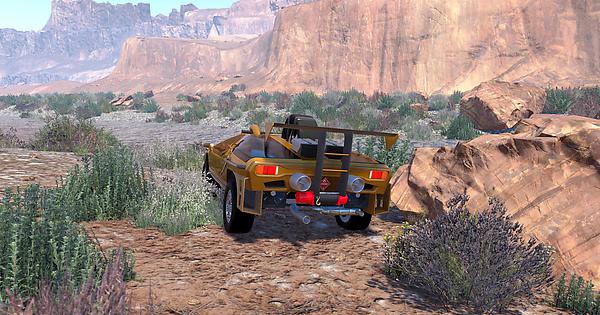 I’m doing one last extension for the deadline. Bare with me here but I do need entries to do this properly. Deadline is 7th of Feb, 12 AM at GMT 6+.

Ack, didnt really want to but i guess i’ll explain it’s functionality so people dont go “wtf is that”

So, The T pose truck the Zephorus L Series Extension is based on the standard L series truck, but with an added habitation module.
The module that is connected to the main cab of the truck is reinforced by many struts and contains lot’s of storage for food, equipment and supplies. One might say it’s quite homely.
But the rest of the L series is far from that, with a Large I6 supplying nearly 500hp and 4x4 Adv Auto transmission this truck won’t get stuck, anywhere. With the front shaped to minimise damage from oncoming animals, scenery and anything else this thing can just keep going until you run out of fuel, but fear not! That’ll take quite a while with two of the large capacity tanks that come with the L series Extension. Other modifications included large roof lights and more reinforcing of the chassis.

I decided to go simple and small so it isn’t crazy like other submissions, but it’s quite affective. 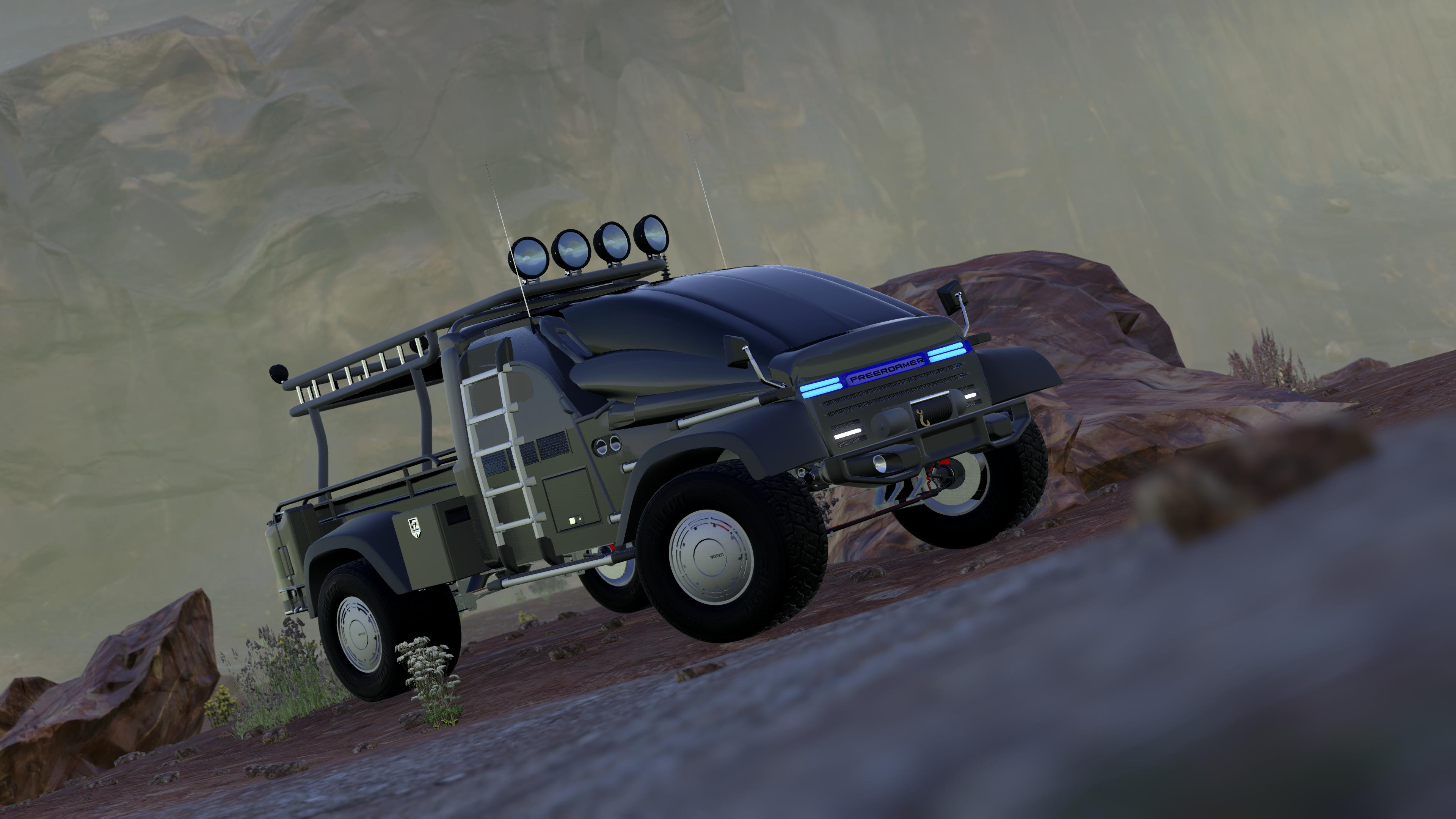 The Helios FreeRoamer is a foward control, modular utility vehicle built for pure versatility. Simply put, how you spec it out can completely change its purpose, from a van, a minibus, to all sorts of variations of different trucks. The one shown here is the Type-T with the Universal Terrain Vehicle package equipped. Type-T is rather self explanatory, being the Truck designation for the FreeRoamer. 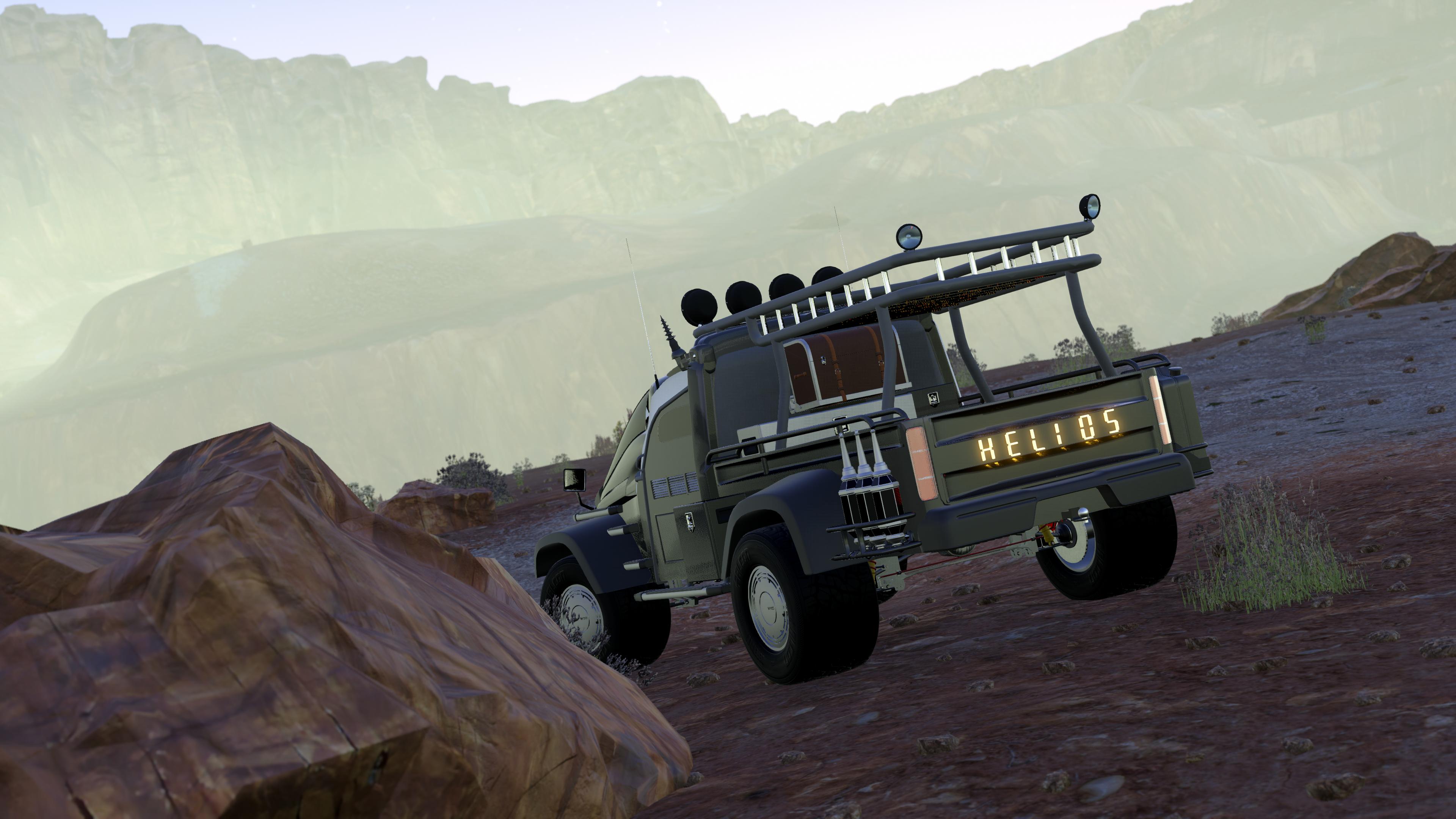 Universal Terrain Vehicle package provides an extensive suite of offroad enhancements. Most noticeable perhaps is the lifted ride height and massive offroad wheels and tires. Equipped with controllable tire pressure and self healing tires, no terrain is an insurmountable obstacle. Intelligent all wheel drive minimizes wheelspin and gives just the right amount of power needed. Double level bed increases storage capacity massively, with additional storage units added onto the vehicle for additional practicality. Thanks to the foward control layout, despite the smaller size, the interior features both a driving and passenger seat, along with a small but practical living space. It is equipped with long range and satellite communications, making sure that even if you are truly in the middle of nowhere, you are still connected. And high powered roof lighting (both front and rear) make sure the way is shining with the power of Helios whereever you may be.

This particular model is equipped with a V8 making 380hp and 500 lb-ft of torque. 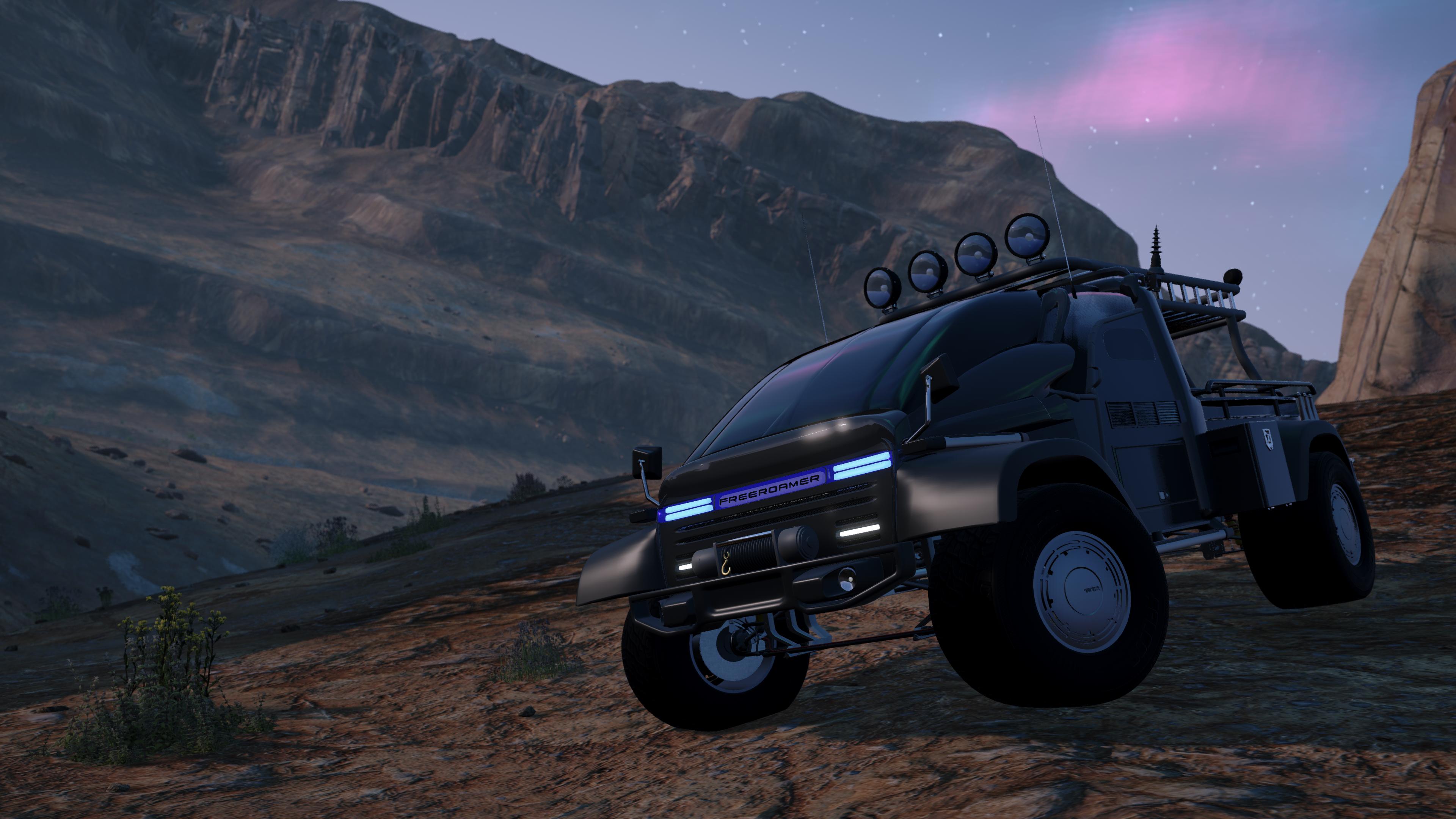 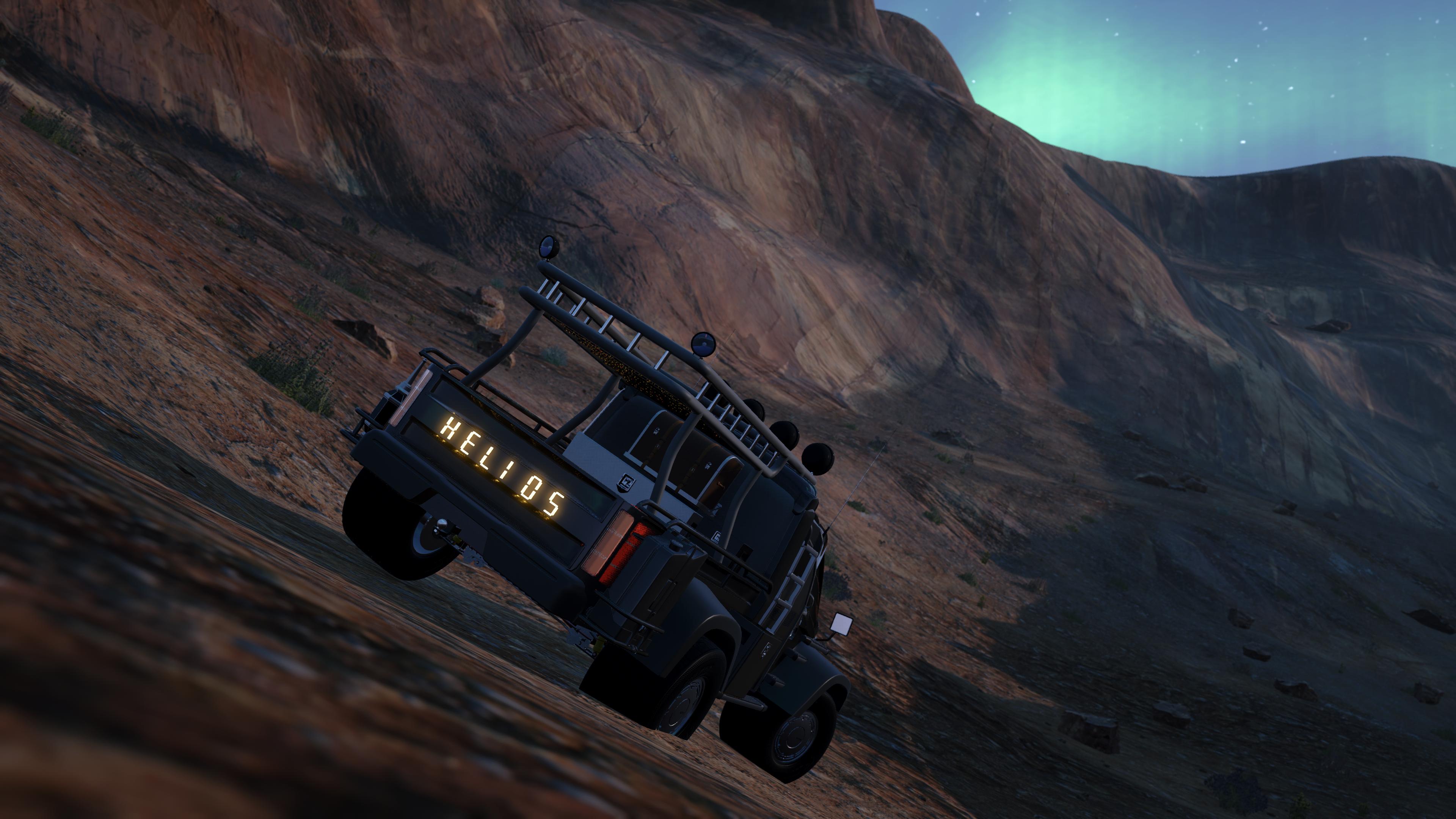 So the deadline of TMCC3 submission passed a few hours ago, sorry for taking the liberty of extending this competition to eternity but hey better to have a good number of entries late than finish it with 2-4 entries and judge among them.

Submissions are closed as of now and I’ll be finishing my judging within 72 hours or less. Thank you for participating

Because fancy tech cannot be relied on, and resources are scarce. Also, it just looks tougher