Further to the clarifying remarks, you mentioned the light truck monocoque as sometimes the sign of a crossover and hence binnable, but I’ve built a literal light truck with that as a draft idea and just wanted to check that was OK.

(Also, as everyone else’s gone with two rows of seats and the one I’ve drafted was a one-row two-seater, I don’t know if you specifically needed 4+ seats. If I need to start again I’ll start again, at the minimum I feel like I’ve learned more about off-road building from this challenge so my second attempt might come out better anyway

Because Comet-Bar makes Bullbars that need to attach to Chassis Rails As in Ladder Chassis.
I have already stated this

I’ve drafted was a one-row two-seater, I don’t know if you specifically needed 4+ seats

Comet-Tourers, based on Patriot camper’s Super-Tourers, They are built for Family touring

Equipped with a 4.0 litre Inline 6 Turbo Diesel producing 343HP and 549lb-ft of torque. Have we mentioned that it has leather interior?

A reliable and cheap and efficient 4L NA I6 Petrol engine with a modest 197Kw and 355NM of torque. A reliable truck for the Australian outback with a easy to maintain engine. Combined with the required necessities of towing (2.8tons) , carrying (3 tons), fuel economy (10.8L/100km) and 4x4 drive train.

The Sport is a step up from the base model and includes body coloured trim, an upgraded interior, stainless steel running boards, and quad-exit true-dual exhaust on V8 models.

Side Note: As soon as I saw the example vehicles, I though of this YouTube channel, one of my absolute favorites. 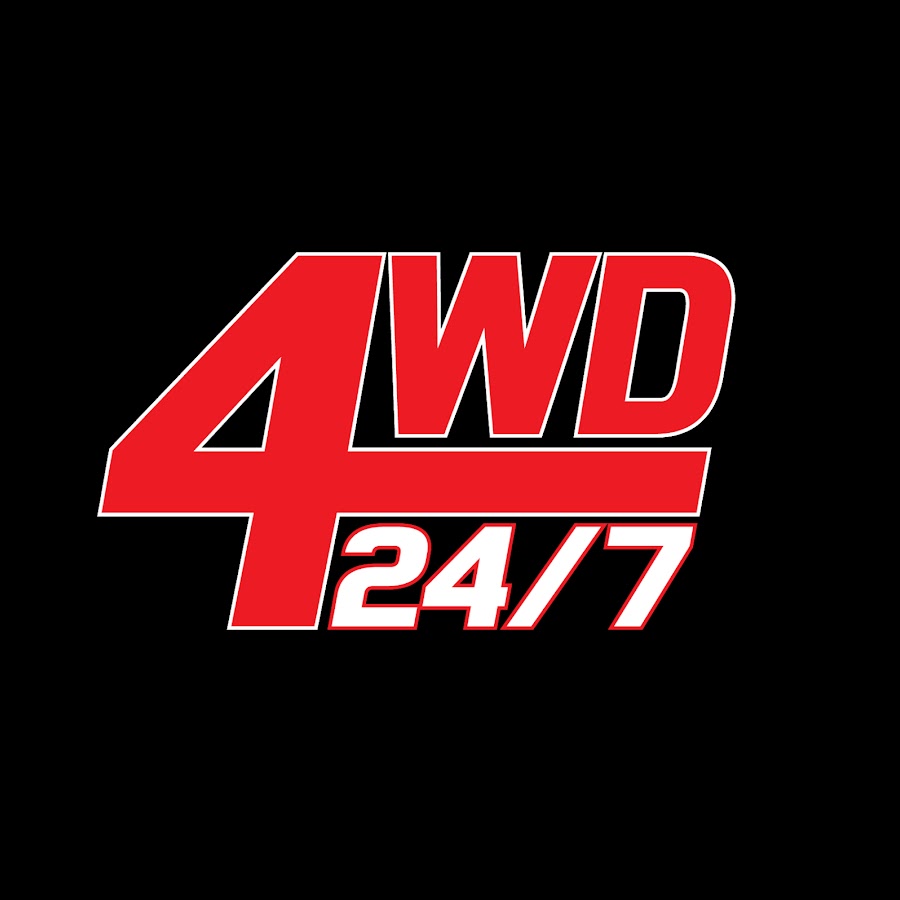 4WD Action has been creating the best off-road content for Australians for 20 years. Our YouTube channel is updated regularly with 4x4 customs, tips, builds,...

Side Note: As soon as I saw the example vehicles, I though of this YouTube channel, one of my absolute favorites.
https://www.youtube.com/channel/UCs-vWZu3t2ky3oImX83S_2Q

Mate… I’ve got some of the Magazines…
Definitely one of my inspirations for this TMCC. Patriot Games, however, is more suited to the Comet-Bar brand.

I do declare, time is up! 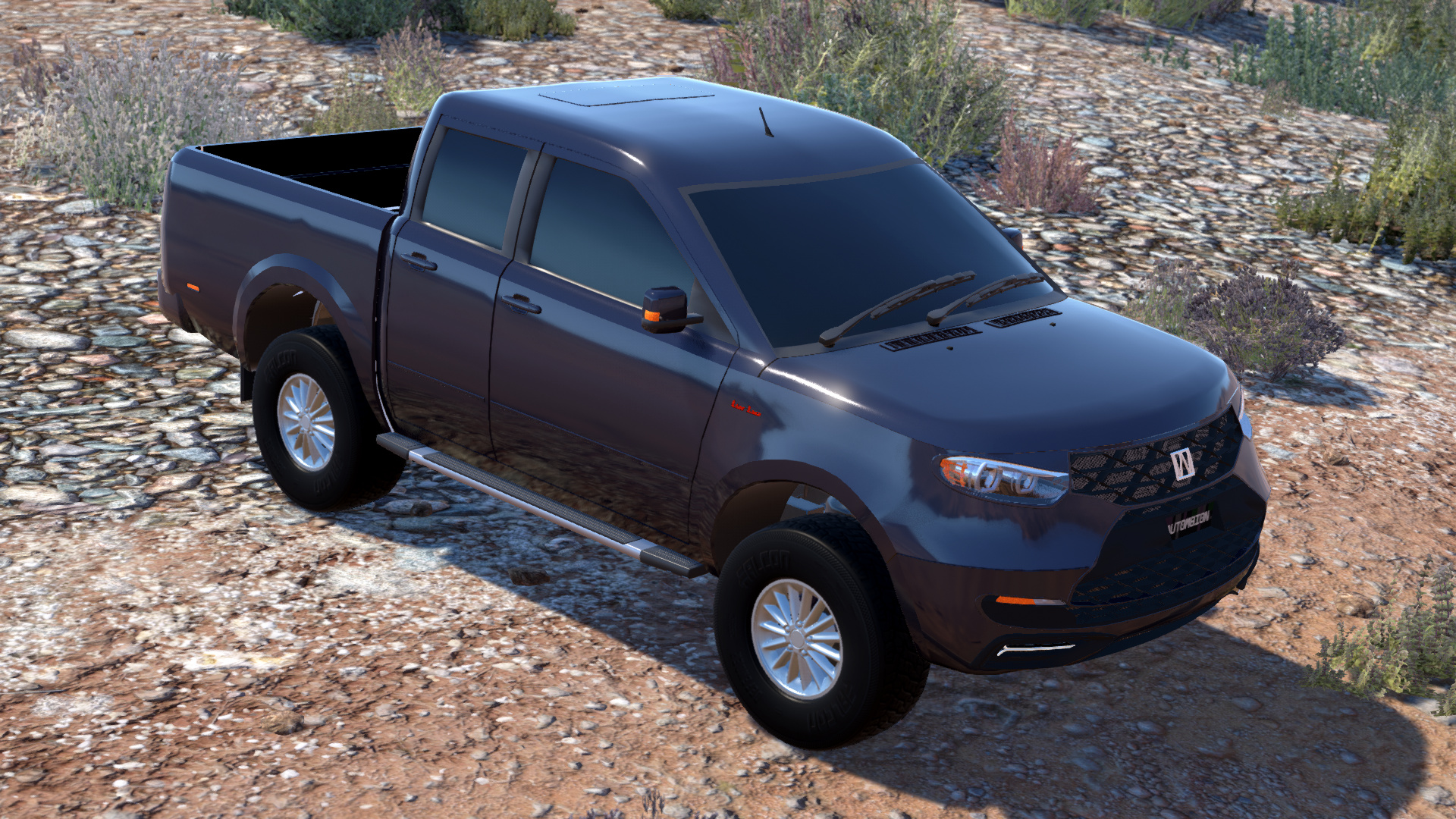 Thrown into Shit Creek for: Utilising a Semi-Spaceframe chassis, among other achievements.

I mean… yes I did state that Classifying as a Crossover was a bin, with one of the merits being utilising a Monocoque or Light Truck Monocoque, But C’mon mate… Semi-Spaceframe… Like the Rolls-Royce Cullinan, which is a CROSSOVER SUV, NAME ME A LOAD BEARING TRUCK THAT USES ONE!! Comet-Bar can’t put a bullbar onto something without Chassis Rails.
Other notes: 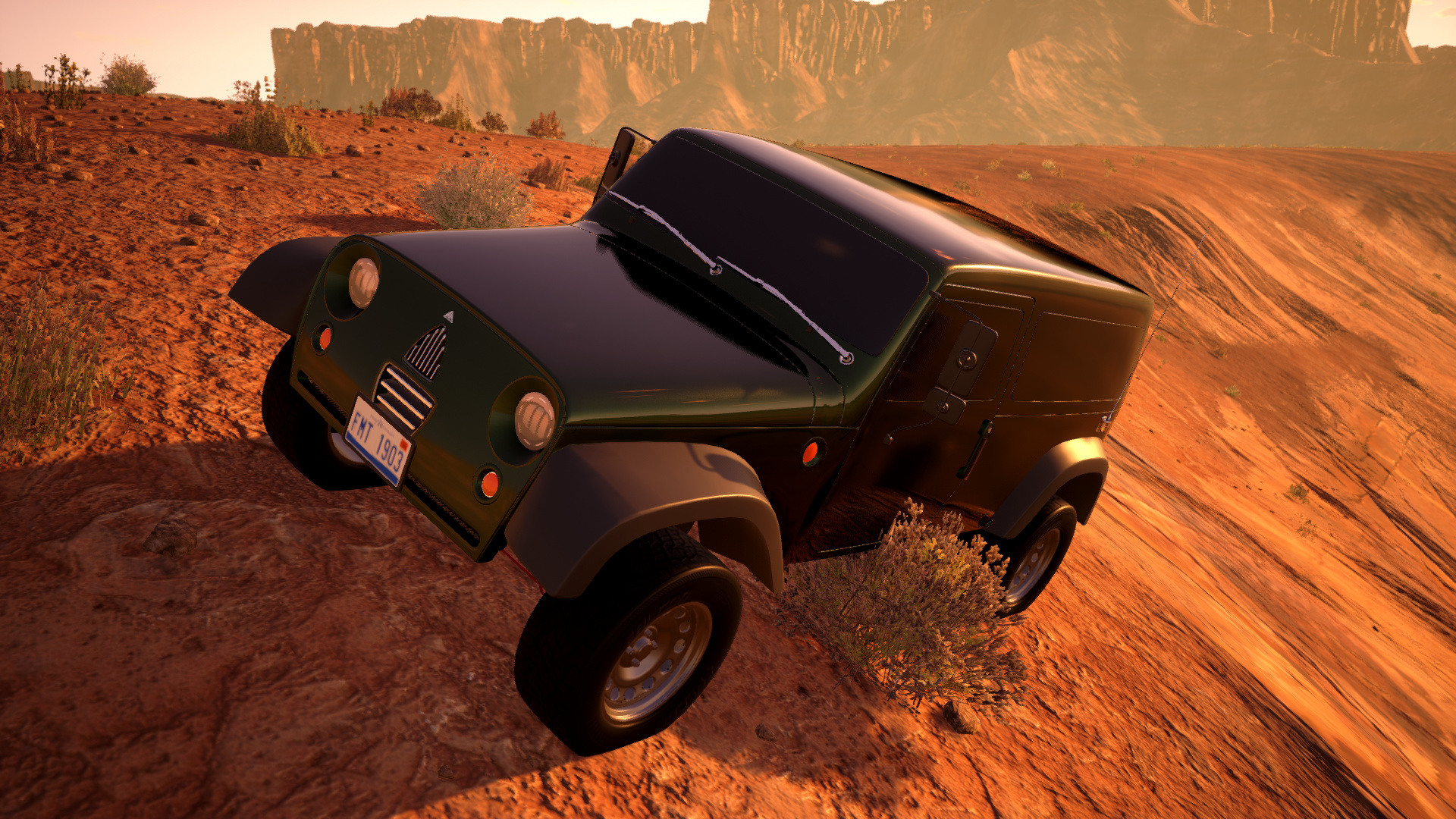 Sent to be used as a Mining Explosive’s Casing for: NVH fail and only seating 2.

The Vehicle is meant to be sold, no one buys anything that destroys their eardrums, they would build something that would, but never buy.
Another… absolutely glaring issue, Fuel economy.

Duck the road (and the fuel economy)

Not sure anyone wants to be stuck 300 metres off the start of an Off-road track having just used up all their fuel getting there on the highway.
Other notes: 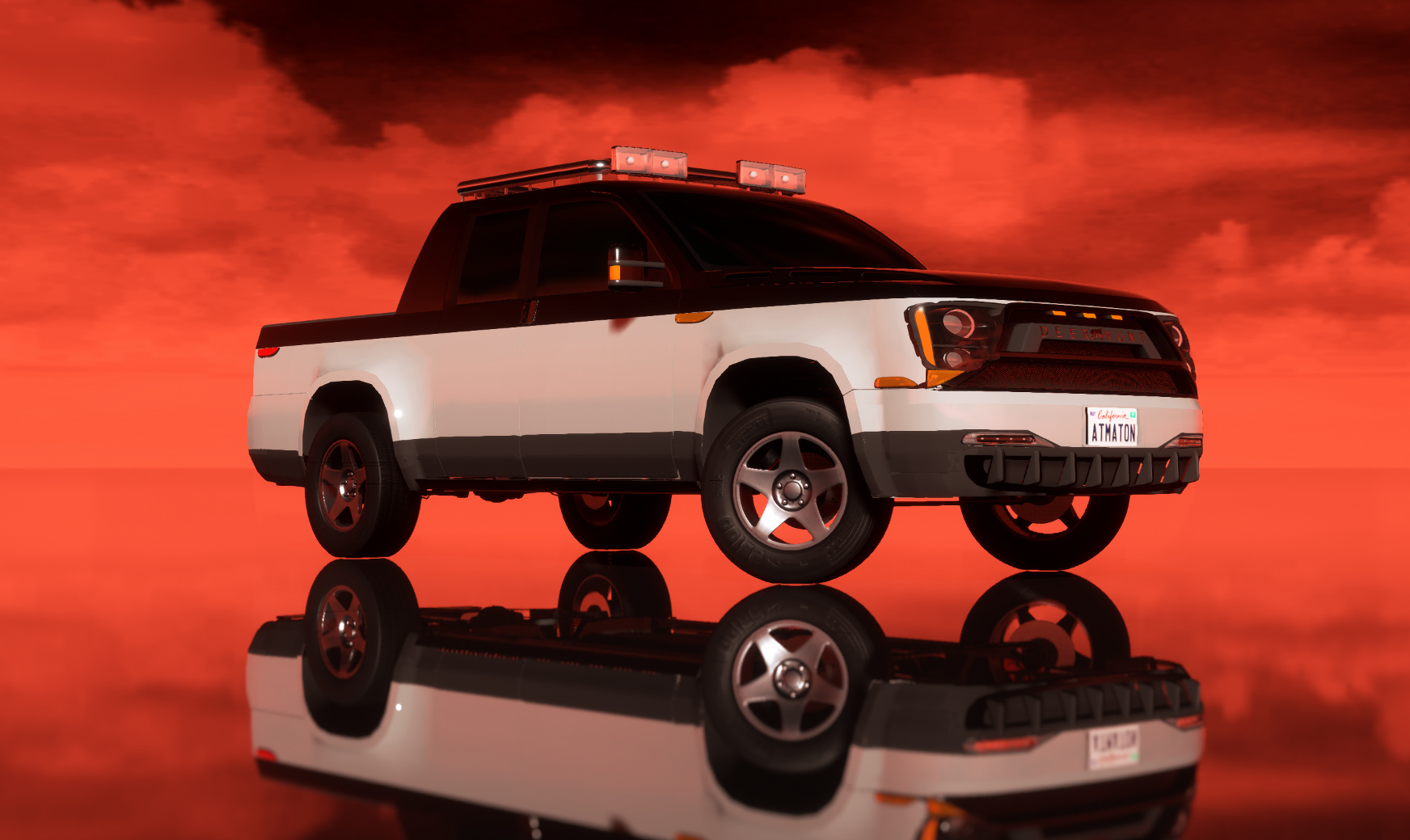 Sent back to America for: Utilising a Light-Truck Monocoque

“Reminds me of those ‘Ridgeline’ things”, Steve from R&D, Well, it’s got half the recipe for being a Crossover, Macphersons and Monocoque up front, This spec they sent to Australia didn’t come in 4x4 either. Who off-roads with 2WD and Macphersons?
Other notes: 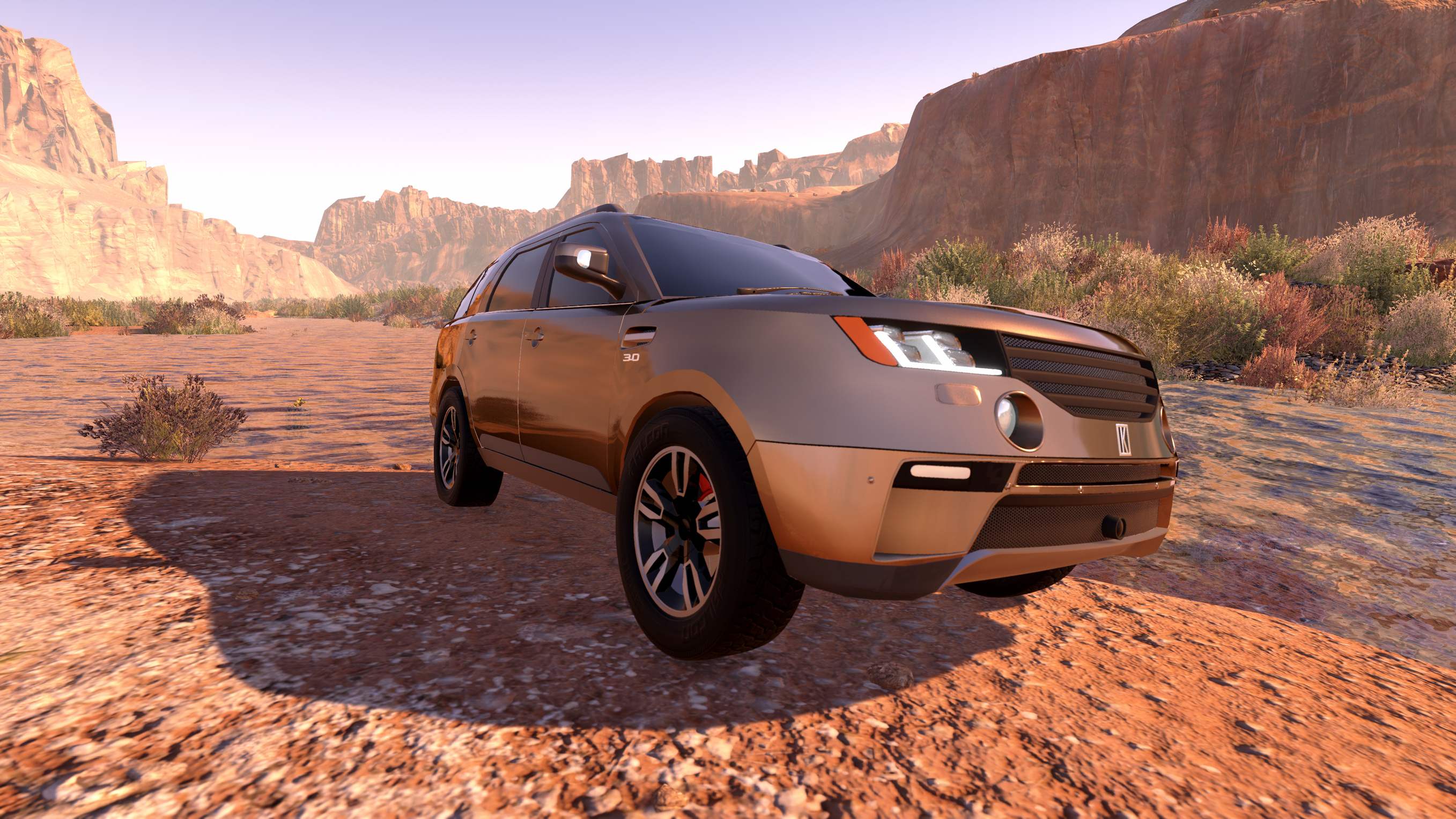 We believe this a British Offroader with some class.

Particularly quiet with a 3 Litre V6 Twin-Turbo and a pretty good predictable 2000 RPM of predictable mid-range pull for a Turbo V6 at this stage of the game, nice and economical as well with a light foot, even if running a bit rich in the Direct Injectors. A decent sprinkle of Automatic driving functions such as Automatic lockers and Air suspension, which make for quite a nice ride with enough load carrying capacity for a decent amount of shopping, and to lug your spoiled kids in, A nice worthy, do-it-all premium family vehicle. 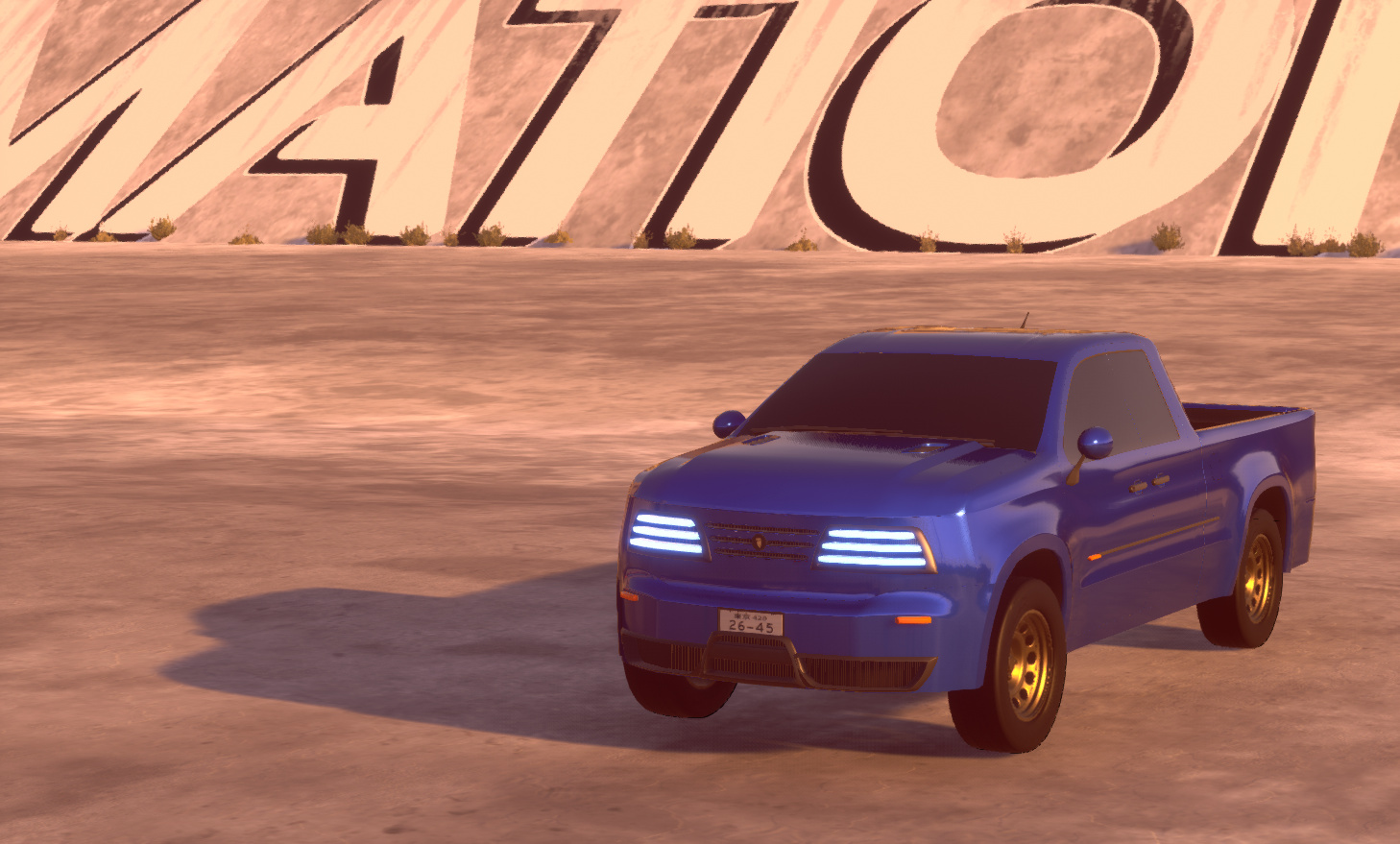 Somewhat good all-round, decent economy, until one realises this is equipped Standard suspension, which isn’t actually good for load capacity/comfort balance, and a stick shift, in which no one but Gareth and Steve would buy. manages to be… mediocre.

On another note, my god that is a horrific front end… it’s all Daytime running lights, also… those are… seriously outdated mirrors

Alfora @Arvok1
No show, can’t purge anyone if you ain’t here 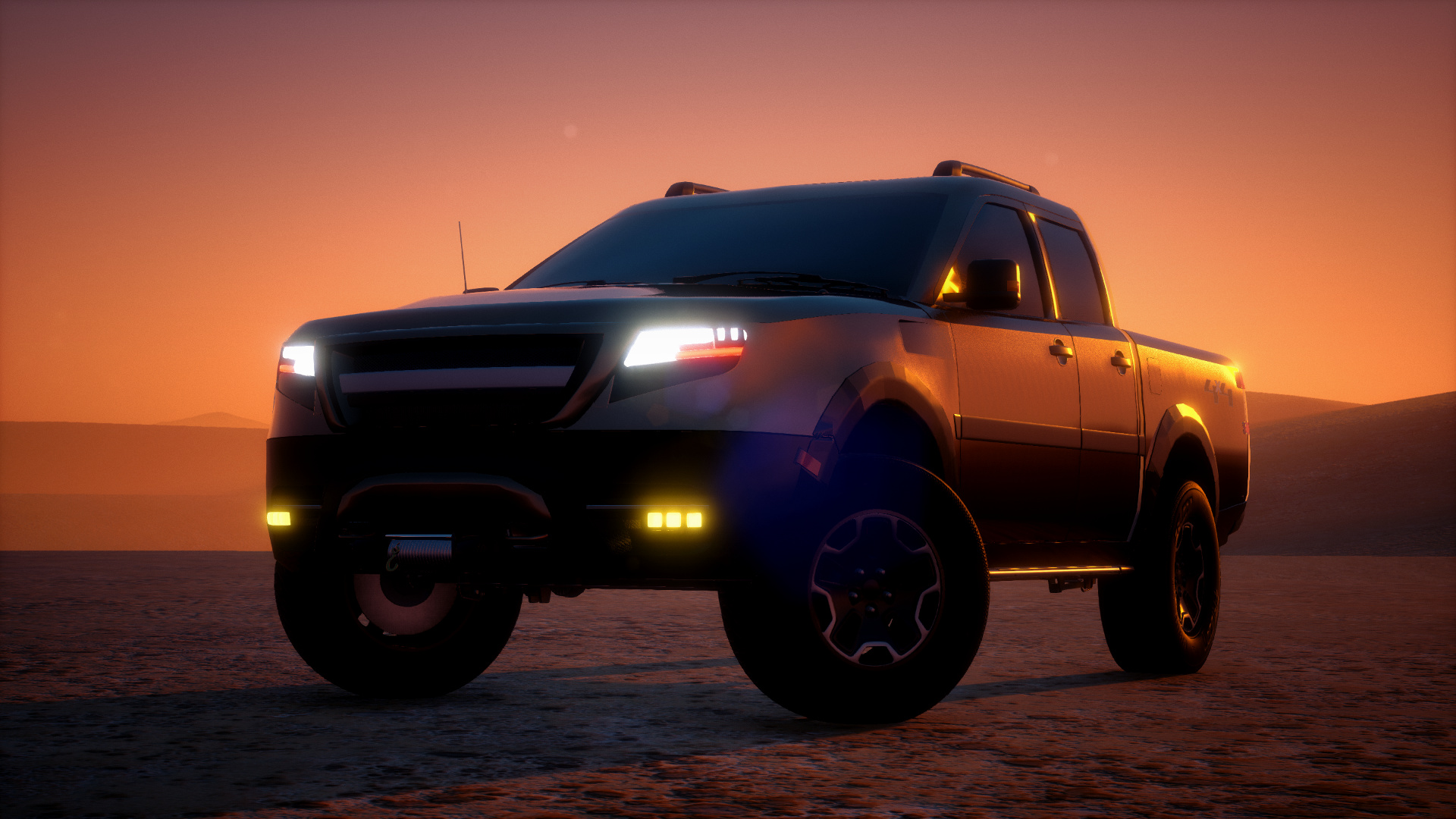 Moderately powered, Unreliable in comparison to the competition, and a low GVM for the class.

Yeah, it couldn’t keep up 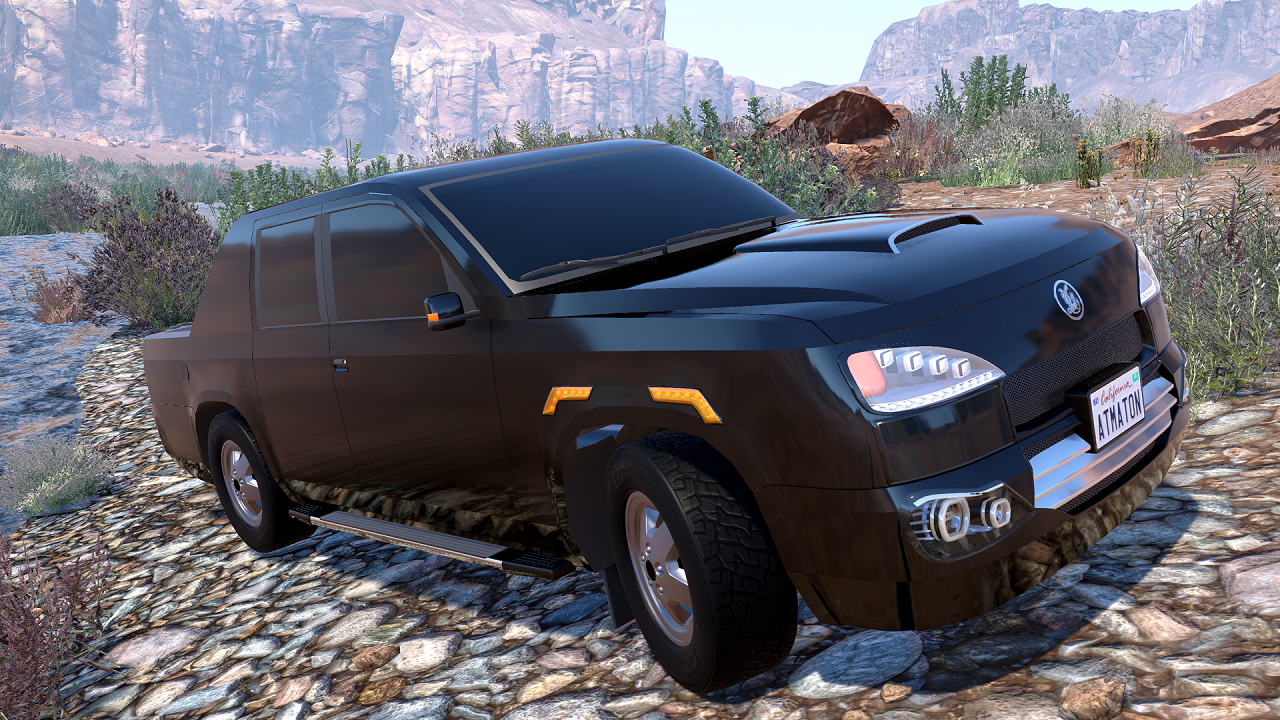 1500 Class Premium Pickup running a Twin-Turbo 5 litre V10 Iron-Block, in which we speculate could be recycling of an old 5 litre V10 casting from a sportscar company, with a peaky amount of mid-range power, Now, last I checked, one could get a 5 Litre Naturally aspirated V8 that makes similar Torque, that power is fed through a 6-speed Auto, low on the gear count frankly for this day and age, and in this class of vehicle.

This happens to also ride lower than Gareths dune buggy, not exactly a good sign for a Premium 4x4 man’s truck, and it doesn’t help this vehicle stance and looks… in which that is also somewhat lacking.

Would you like to come with us over this hill… oh, no you can’t 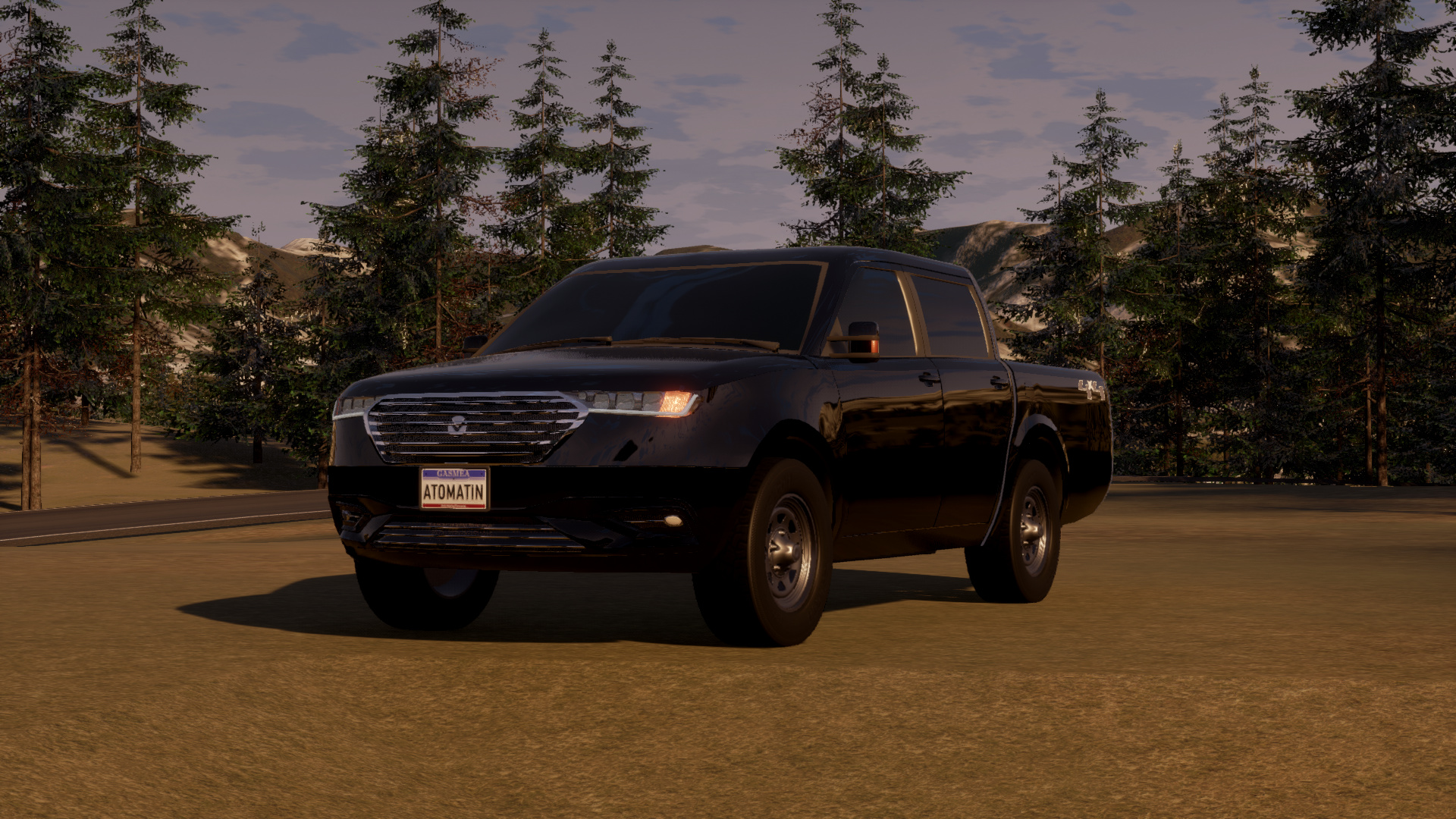 Premium Spec Pickup right at the top of the Price range, Plenty of the good stuff, as one would expect, drinks a wee bit, but for predictable power for most of the rev range… we are willing to hold that trade-off, though High-Flow Catalytic Converters are a bit of a pain to replace, not that it detracts from this vehicle, good load carring rating at 2 tons, which is good for a Pick up at this size and ride height. Jessie in the back office has been eyeing this one… 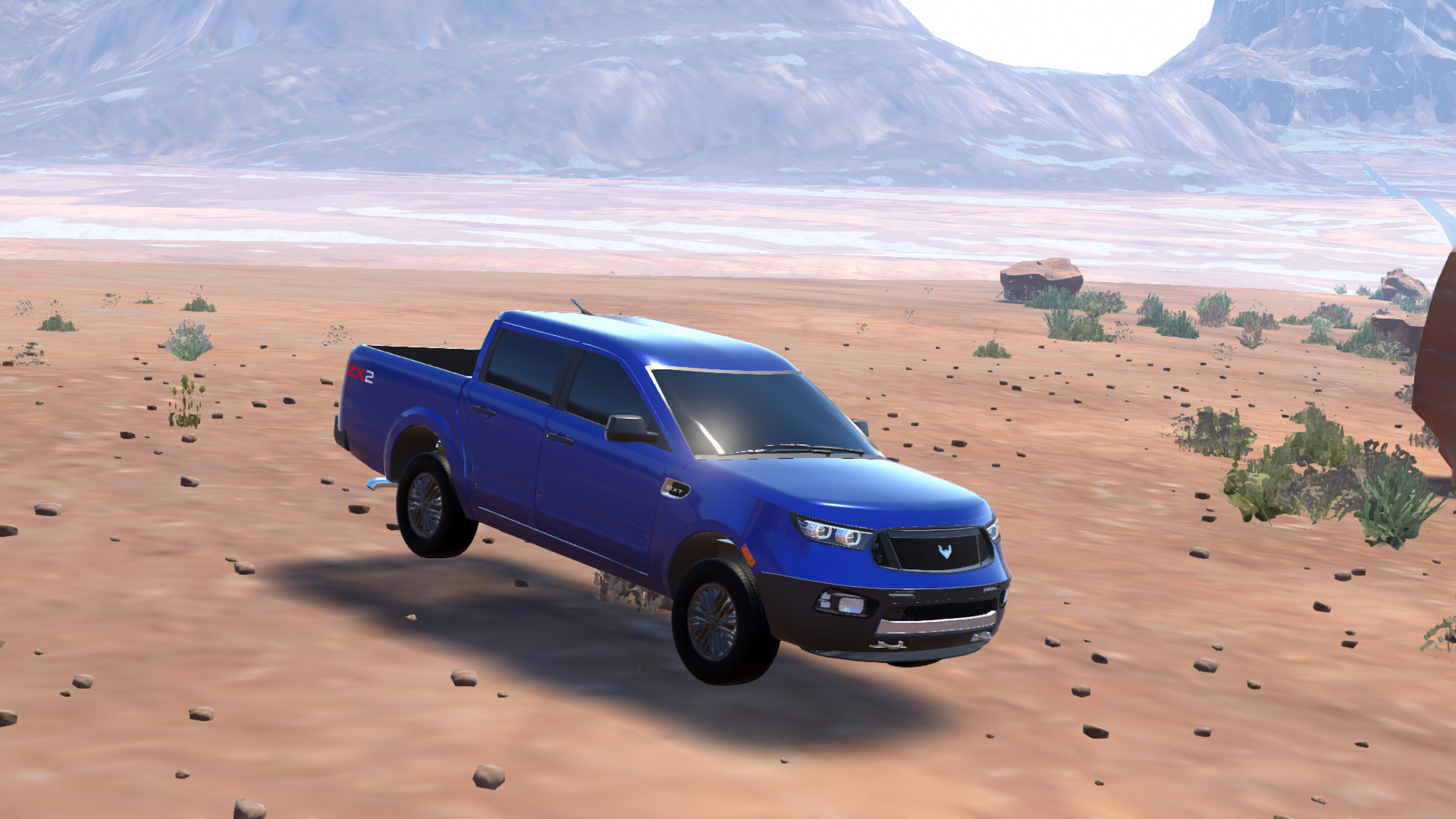 1500 Class Pickup powered by a 2.3 Eco Turbo I4, Best economy seen so far, but with a Major Caveat, The lowest rated torque of anything sent in, now that’s workable if you have somewhat it consistently, in the powerband, peak torque roughly only lasts for 1800RPM, starts early, but not for long.
also a detriment, 0.4 Ton Load capacity, it rides… very soft for a 1500 class pickup.

Yeah… this one is out

So far, my decision to use a relatively simple engine (big atmo V8 with port injection, tuned for a fat torque curve) and suspension (progressive springs, monotube dampers and passive sway bars, set up for load capacity) combination is paying off, despite being right on the price limit due to using a premium interior and sound system. Fingers crossed it does well enough in the final reckoning…

I took a different route from you. I spent more money on the drivetrain than interior. But I did use a big V8 as well. Let’s see what happens

until one realises this is equipped Standard suspension

This comment confuses me. I have double wishbone front and leaf sprung solid rear suspension, which is the closest Automation allows me to get to the market norm for Australia, and the suspension doesn’t bottom out even when fully loaded. The tray’s rated for 1,100Kg and can tow a further 1,100Kg (according to Automation) so it can haul lots of stuff without upgrades… I cannot, for the life of me, see what’s wrong with my setup!

They’re LED headlamps, not DRL’s, although they do function in that role… But I agree it’s probably a tad too “Edge-lord” for the Australian market, lol

Here’s a better pic, serves me right for trying to replicate all the arty stuff I’ve seen on Killrob’s latest photo competition, lol 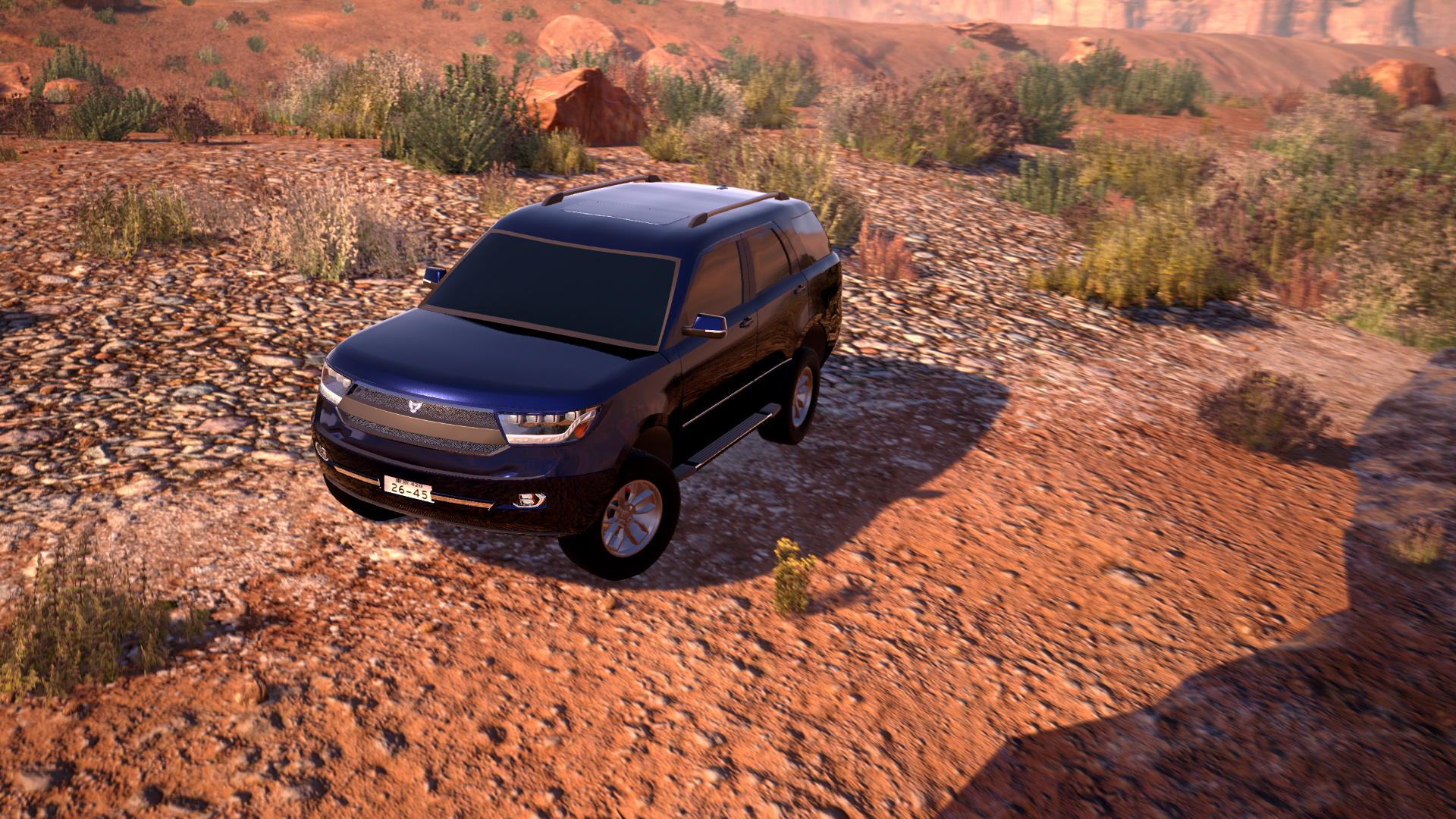 Somewhat equipped Japanese SUV with a similar engine setup to the excellent GX8, just with a redundant 5 valves and having cast internals, Power is sent through a 7-speed slushbox, managing worse fuel economy than the GX8.

The targeted market for this sort of vehicle in Australia would be on the highway quite a bit, plain 'ol Non-Variable Steering doesn’t help highway manners, also not helping comfort in this vehicle, it’s incredibly stiff riding Hydro-Pneumatic setup.

Hey Davo, what happened? "Hydros blew on the way to the Chiropractor" 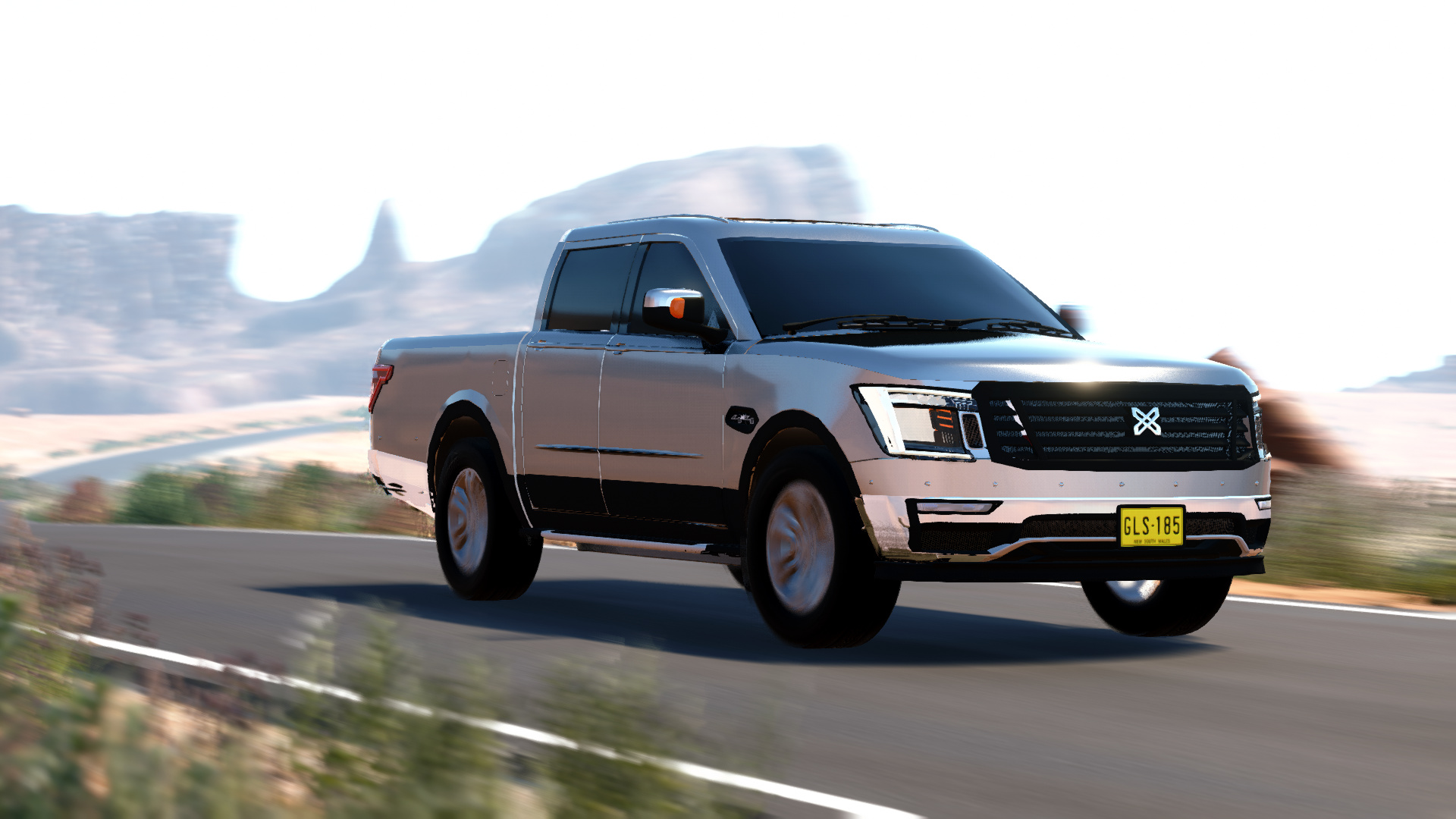 Another Japanese Vehicle, a 1500 Class Truck, this one with its main bragging right being all the Torque it has, wanes off but it’s useable low-end torque, in theory. Good economy and reliability, with a well-equipped safety package, this is very much aimed at a family that wants a big chonker with some class. 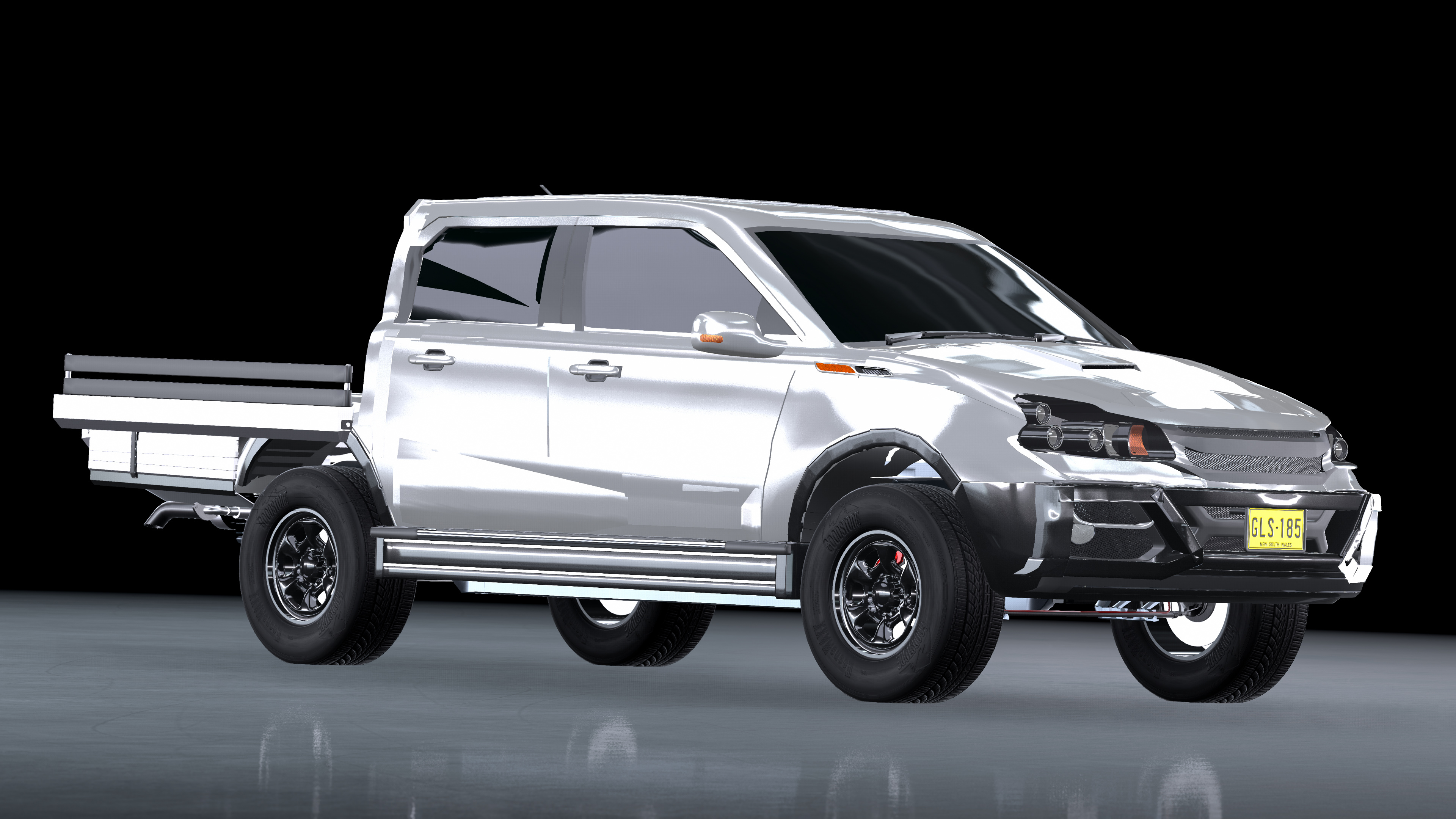 Japanese derived 1500 Chassis-Cab Fleet Truck. Does what it needs to do on the tin, nothing much more, nothing less, loads of bits to add without sacrificing many vehicle functions, excellent fuel economy, par to the Knightwick with a good reliable predictable power from a Naturally Aspirated Economy 4 Litre Straight 6. low torque, but for most of the rev range and rev limited when it finally wanes the torque off, good gearing with loads of torque range negates low torque and being a 8-speed Truck, it certainly isn’t hindered, good 3-ton tray capacity, excellent for the Class and ride height. 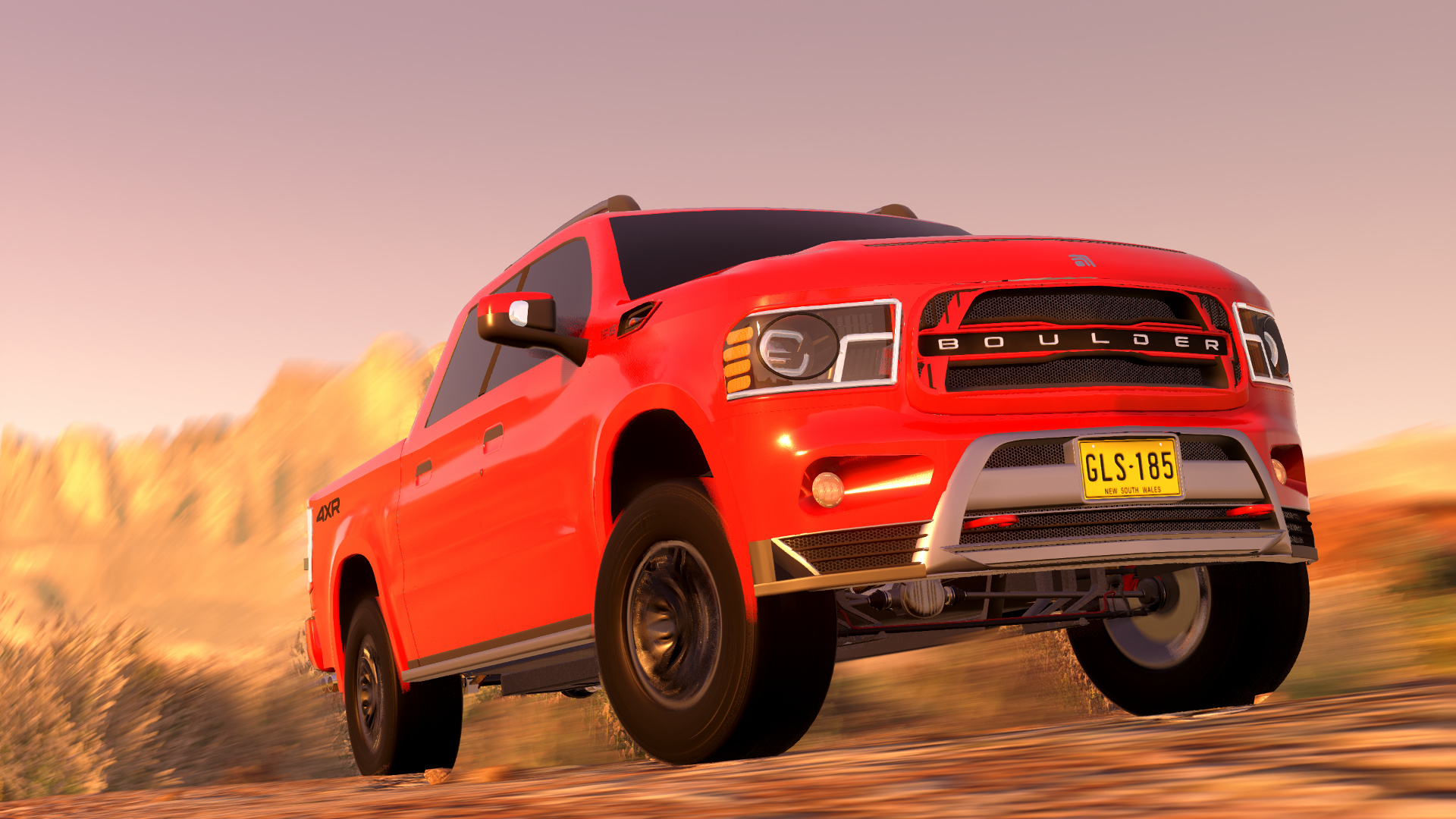 Adventurous Downsized American Pickup with a options package. 5.6 Litre V8 showing incredible reliability, The highest sent in.
Falls apart when you realise this relatively small package is rated for 3.3 Tons, more than the Yama Yosan, in a smaller package, this comes from a ride stiffer than Koala Shit. not sure if you would want to, let alone could even put 3.3 ton in the back of that, would have to be Osmium hyper cack or something…
Another proper downfall, The Lowest Non-binned Safety, Basic 10’s… good for a 2012… not 2018
and it looked good as well

Going Through to Stage 2

Stage 2 will be up soon...
after some Bull-bar Building

I get that the suspension is stiff and comfort is low. But what exactly is wrong with hydropneumatic suspension setups on a vehicle deigned for Off-Road, when automation designates it as the best setup for off-roading? And based on the Gasmean market in game the market is Off-Road Premium, which was what I was going for. So what exactly did I miss?