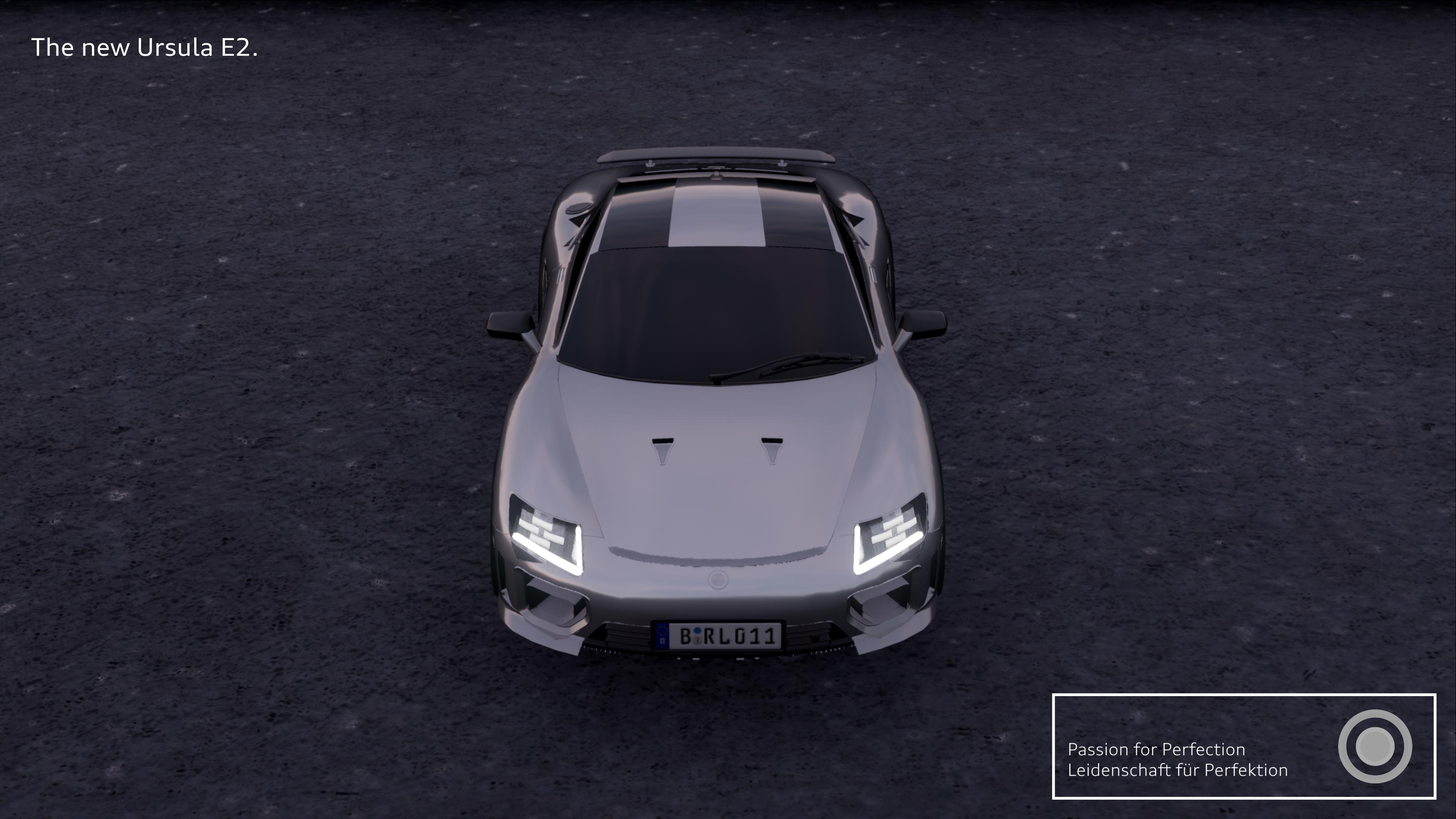 [image] Ursula AG Official Press Event @Tokyo Motor Show 2019 TOKYO: Ursula AG has officially announced it’s latest iteration of the E-series supercars, the new Ursula E2 in Tokyo this week. The E2 is Ursula’s latest supercar offering, and with the plethora of new tech included, the E2 is certainly the performance icon for the next decade. Highlights: The all new Ursula E2: The Pulse of Future. [image] The all-new Ursula E2 is now officially an… 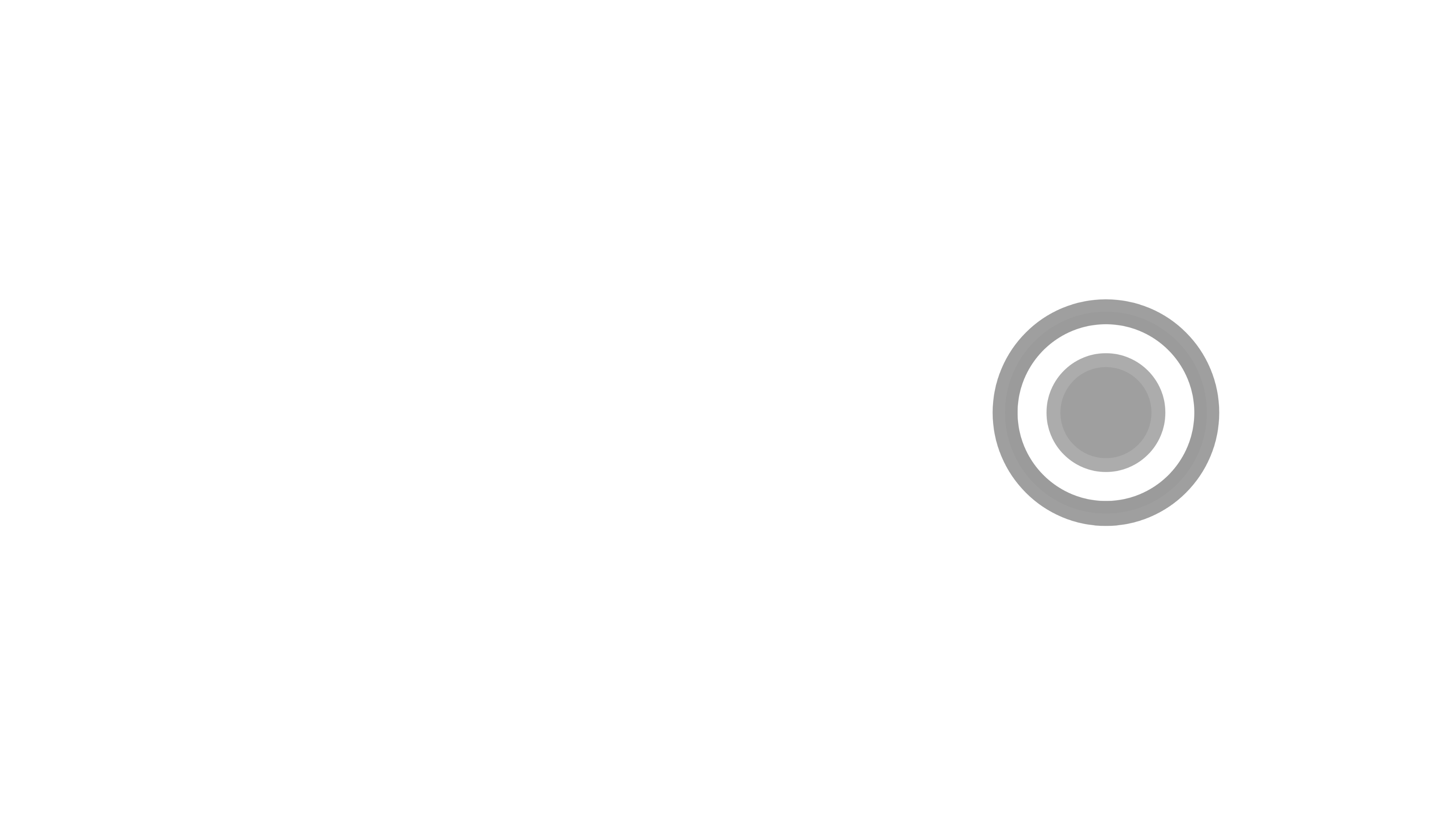 BREMEN: Just today Ursula AG has hosted a live event on the newly opened Ursula Welt in Bremen, Germany. At the event, the eV4 coupe SUV is officially announced, as Ursula’s first production electric vehicle. Also at the stage, Ursula’s spokesman also announced that the eV4 is a major step of Ursula’s electrification plans, as the company strives to launch a full lineup of electric vehicles by 2030 under the ambitious Vision 2030 plan. 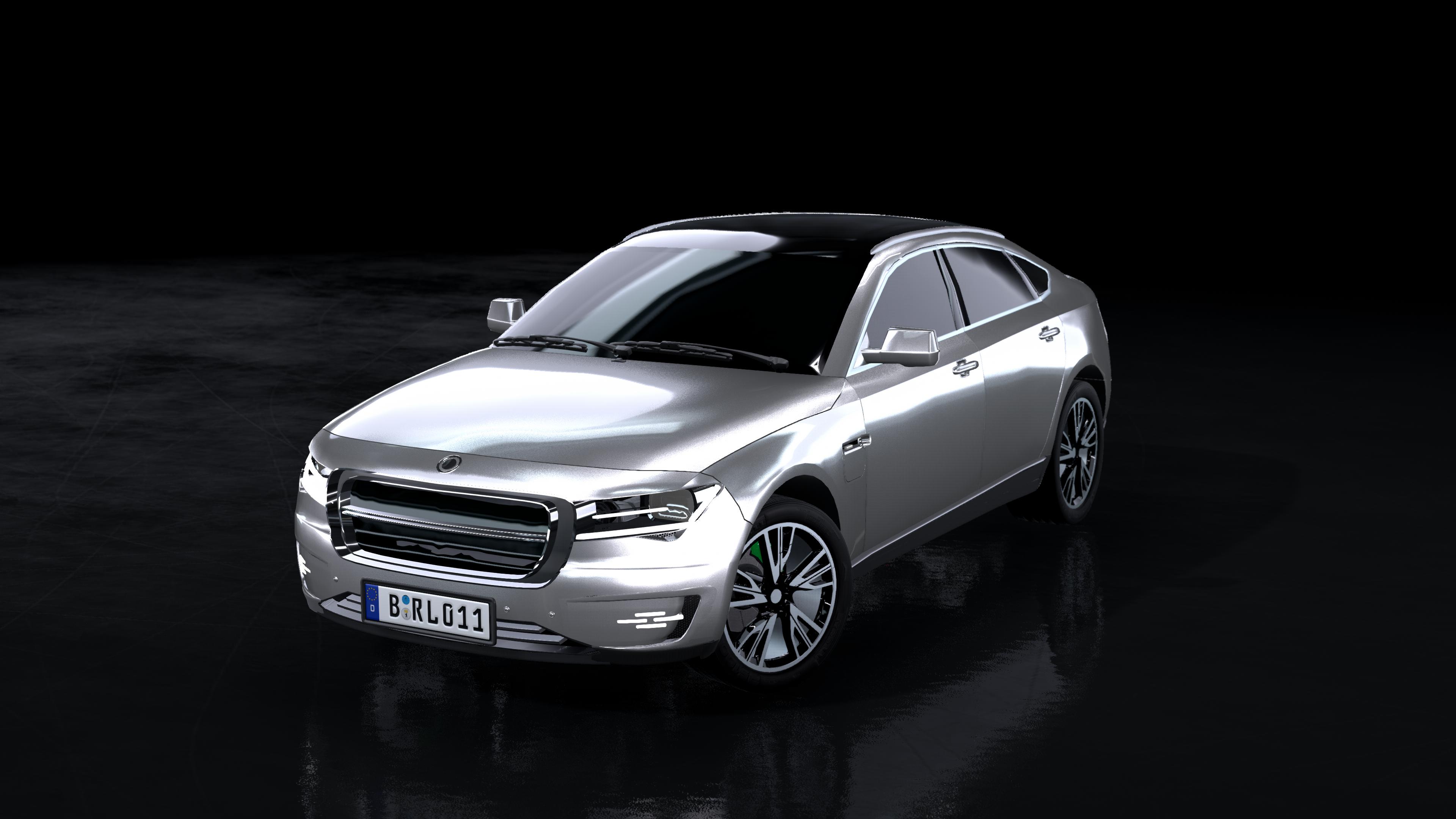 The eV4 is Ursula’s first-ever dedicated electric vehicle, and the first vehicle under Ursula’s eV electric vehicle lineup. The eV4 is a coupe SUV, with the usual Ursula Fluid design touches combined with futurism and a much softer, human design to make drivers feels like home while driving it. Built with the advanced Ursula Advanced Modular Platform (UAMP), an all-new modular platform designed for both electric and conventional vehicles in mind, the platform optimizes on improving the vehicle in every way. 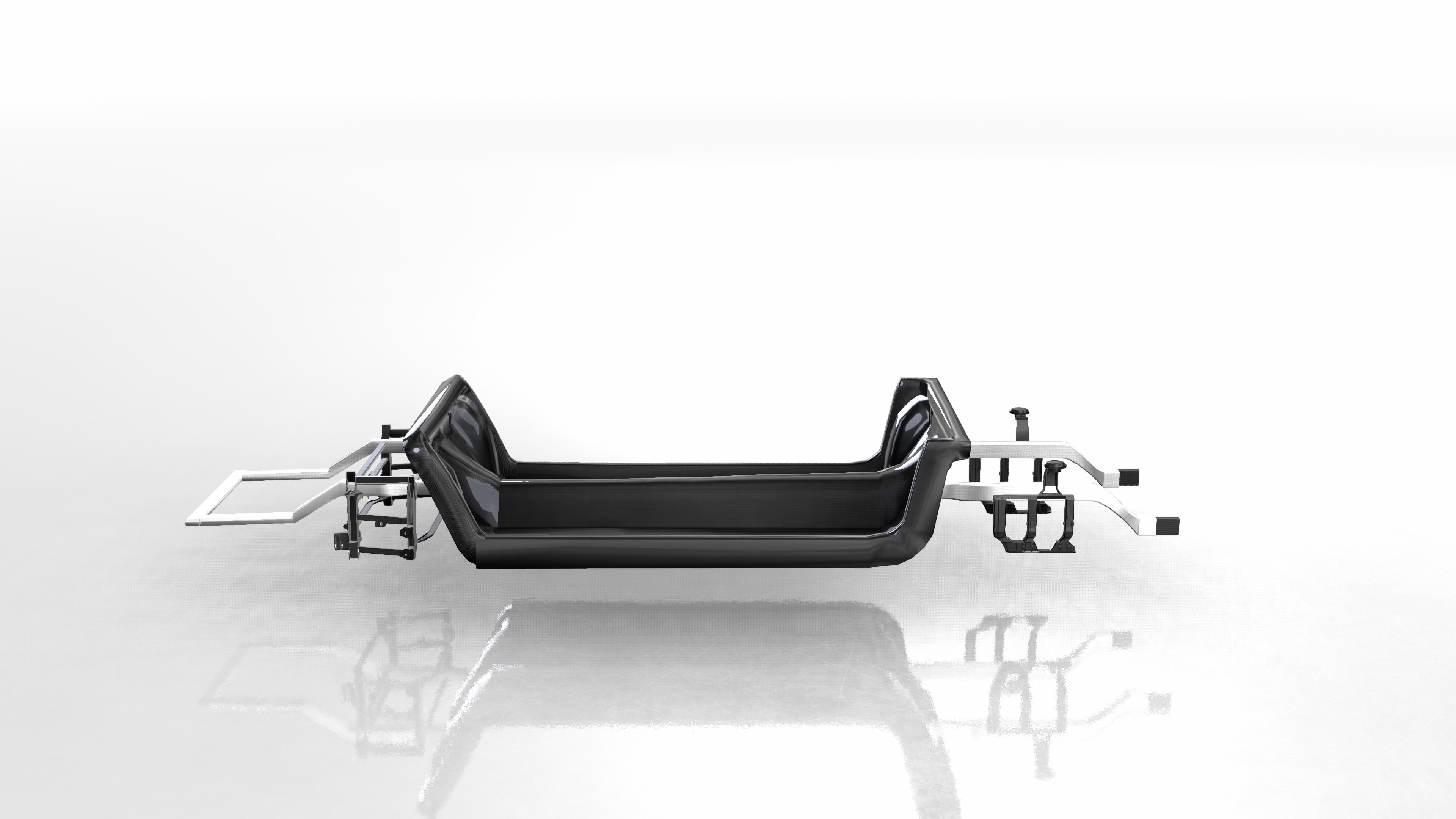 Unlike any electric vehicle, most of the eV4 is made of carbon-fiber reinforced plastic (CFRP), which is previously limited to high-end supercars and racing vehicles, thanks to advancements in technology that enable the creation of quality carbon fiber products for a lower price. With a lower weight and a higher strength, the use of the material ensures a better driving feel, more range and a safer ride compared to steel or aluminum. 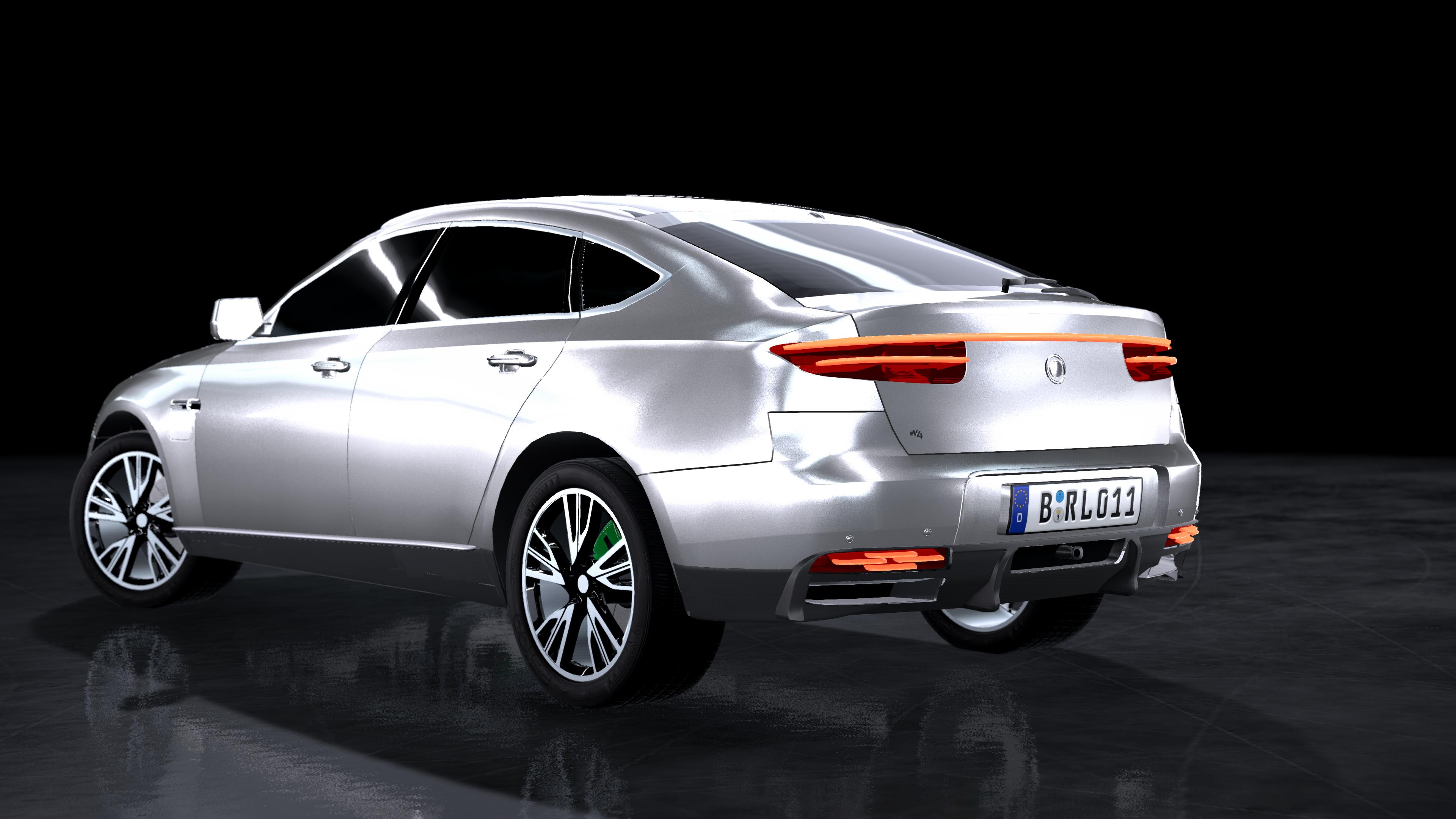 The eV4 is available in 3 different ranges, either with rear or all-wheel drive, 3 different motor choices consisting of dual or triple motors, as well as 2 different battery sizes (85 kWh and 105 kWh respectively) to choose from. At it’s best, the eV4 can get up to 475 kilometers of range without charging. 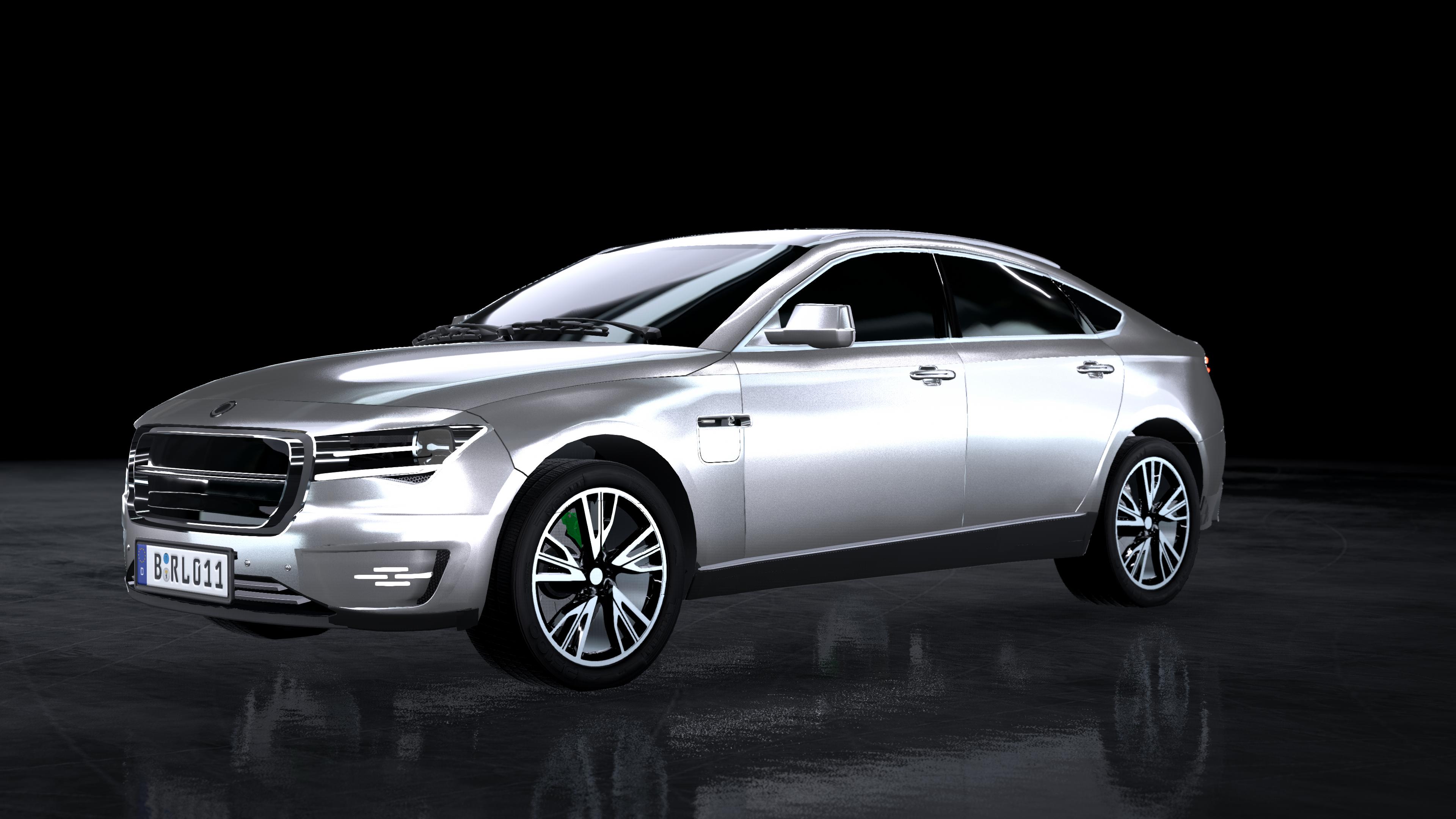 It will be able to get an 80% charge in around 30 minutes when using 150 kW DC fast-chargers. A home charger is also provided, with an optional 40 kW charger to provide a swift 3 hour charge to improve usability. Batteries are water cooled to maintained battery health, and despite the setup the cooling system is specially designed to make the vehicle lighter, improving range and handling. 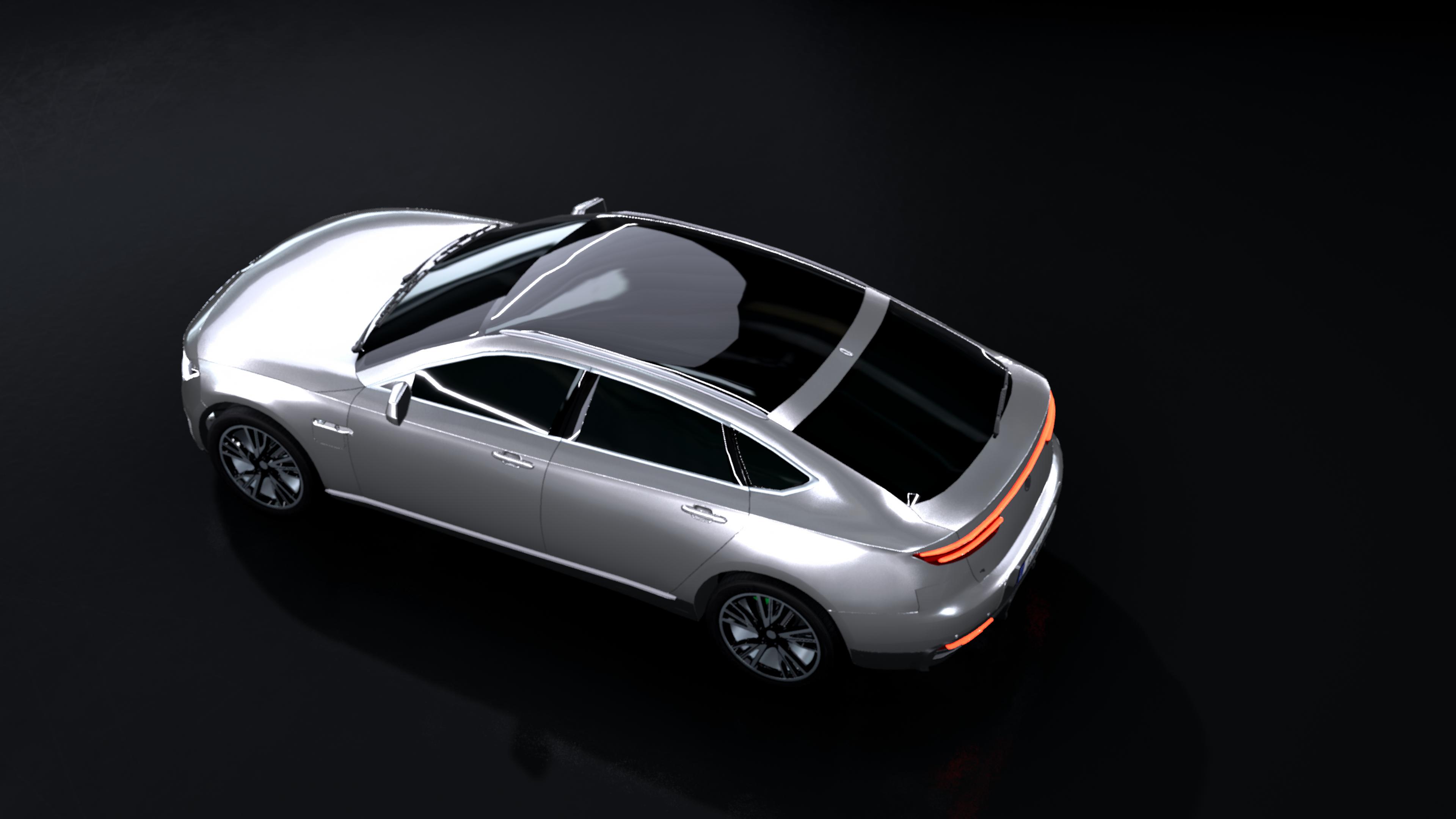 As usual, the electric coupe SUV is available with Ursula’s advanced technology and luxurious kit, as well as the Smart Drive Assist automated driving system, unlike any other vehicle in the Ursula lineup, is offered as standard kit for the top range models. 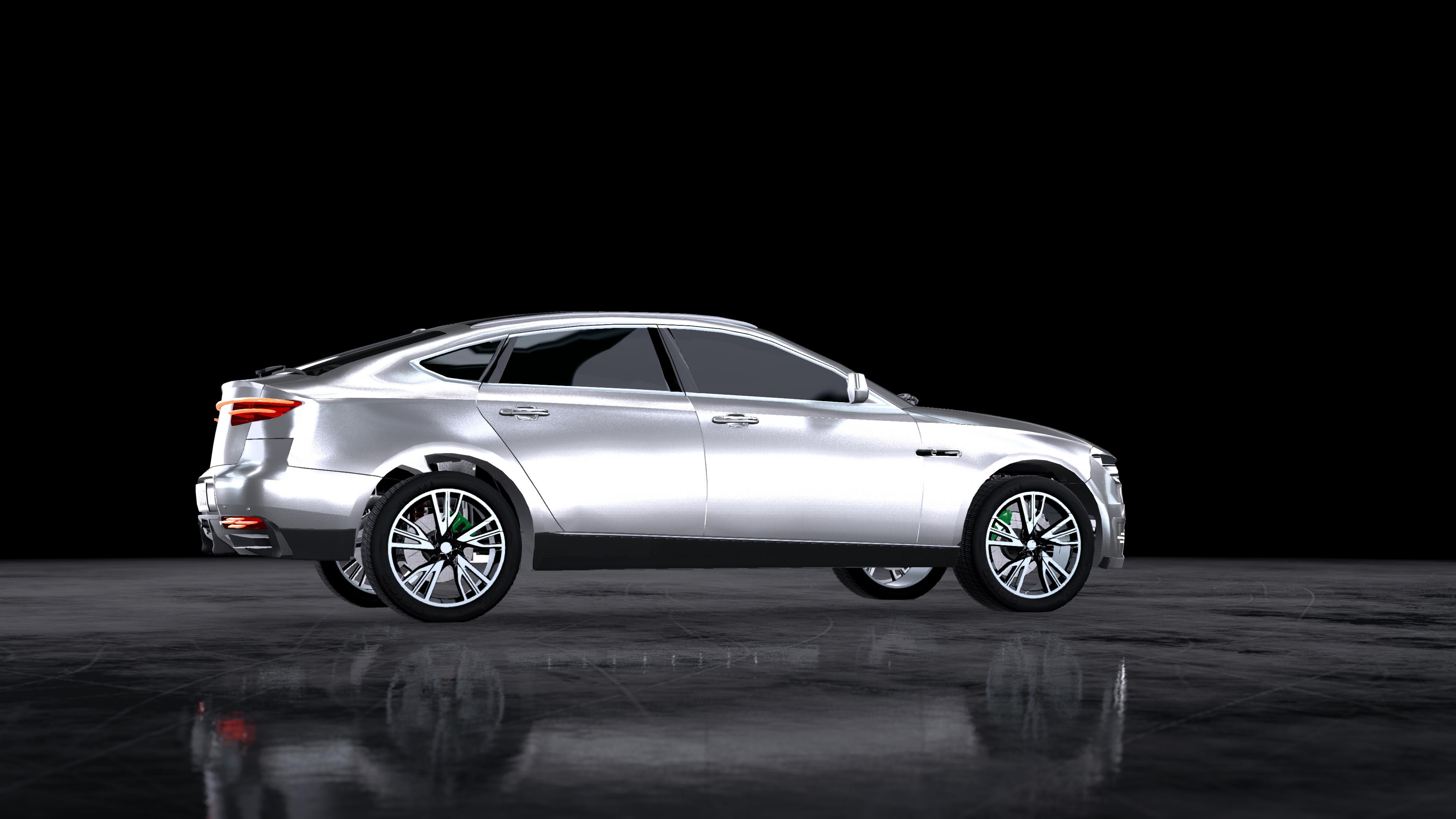 The eV4 starts at €82,500 in Germany and £84,240 in the United Kingdom. European sales for the 300 and 400 models will commence in the second quarter of 2020, with the top of the range 500 models arriving in 2021. American and Asian sales of the vehicle will start in late 2020.
All vehicles will be produced in Ursula’s all new carbon-neutral factory in Dresden, as a pledge for making the eV4 a truly carbon-neutral SUV. 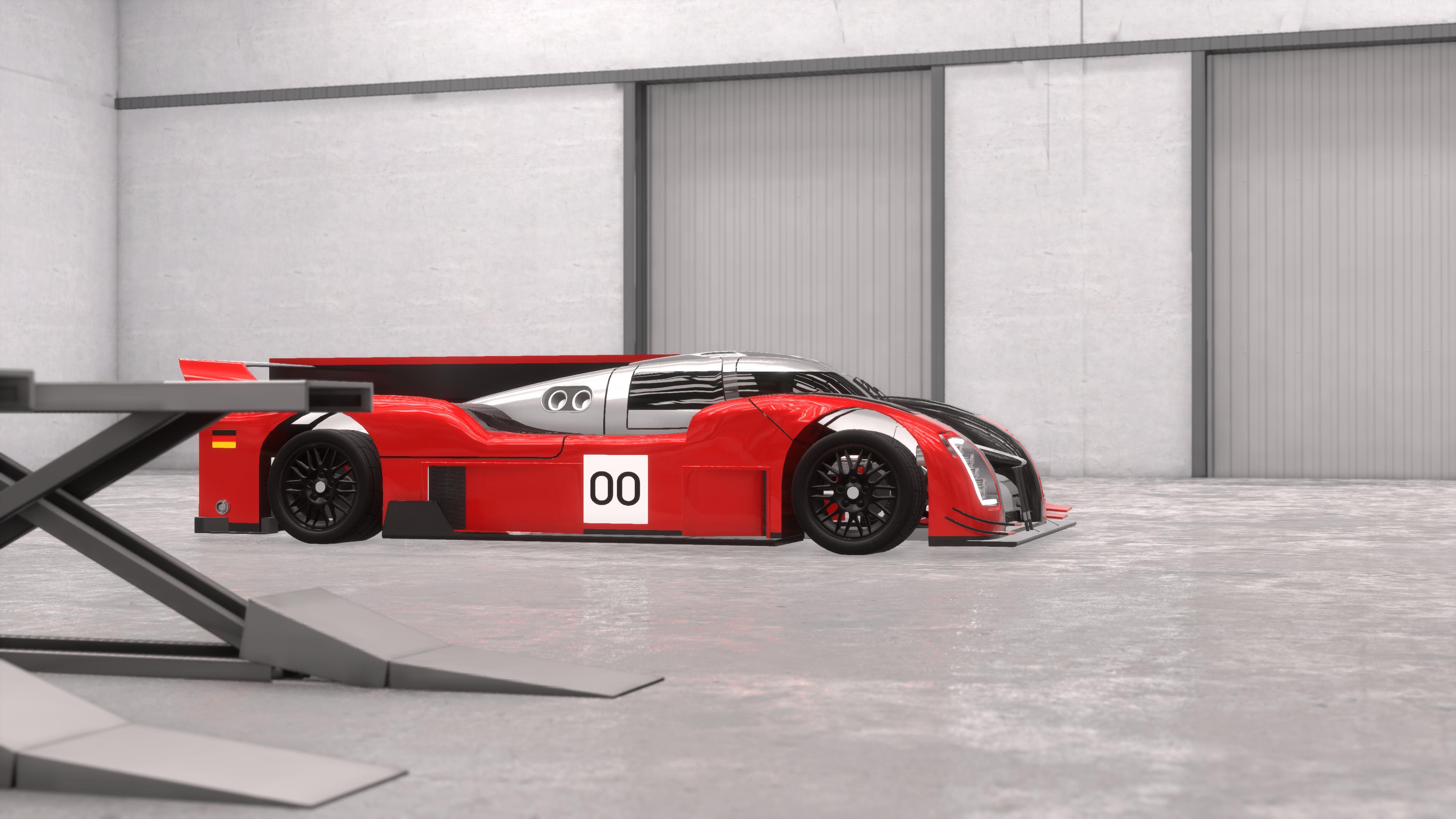 Prior to that, besides it’s successful DTM, GT and rally programs, Ursula briefly joined F1 with the help of American tuner Rockford Racing in the 2004 - 2008 seasons, but ended up being a failure with only 5 race wins in 4 years. In the end of the 2008 season Ursula have announced that they will not join F1 starting from the next season, and therefore the company ended it’s formula racing programs. 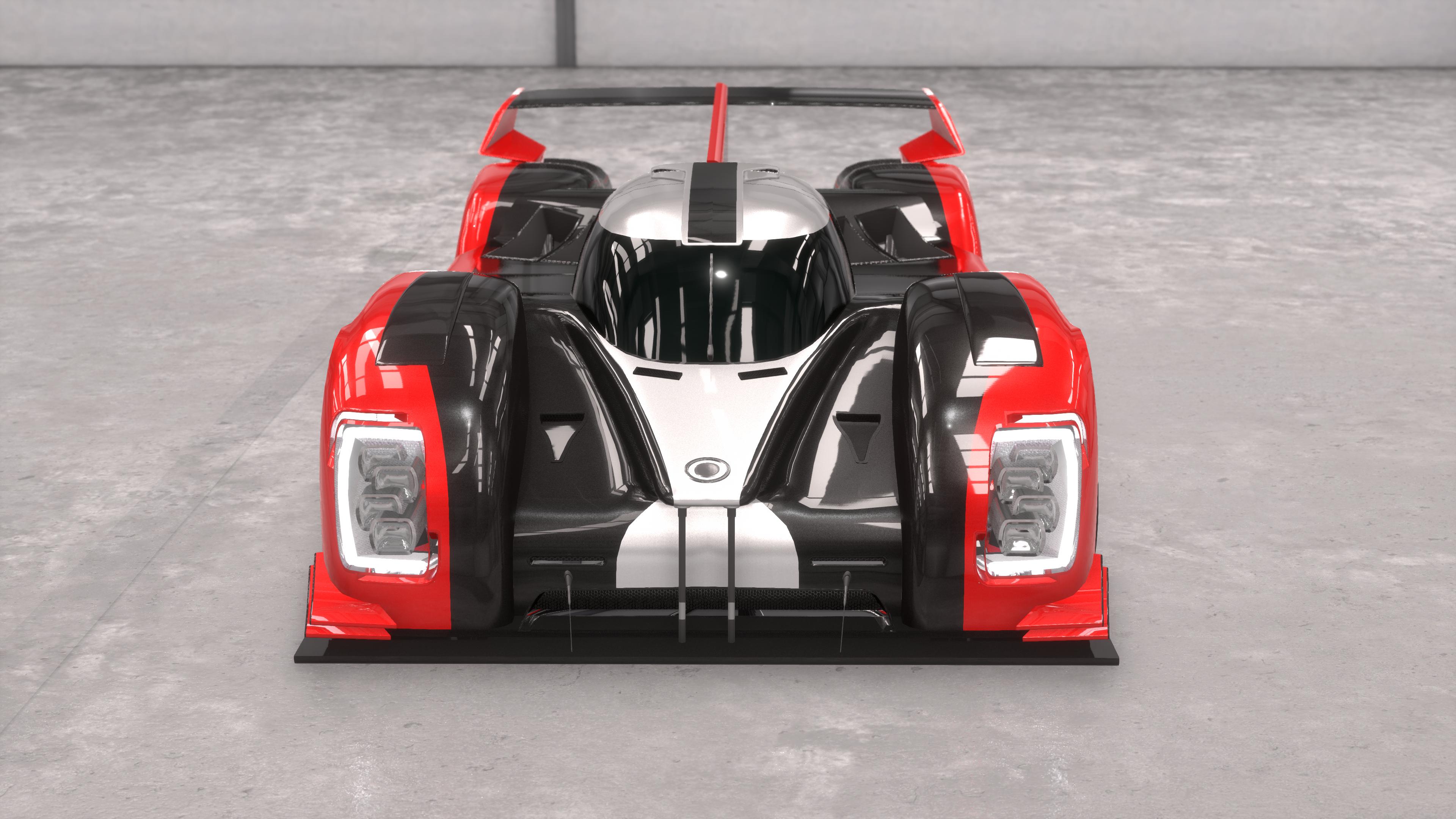 However, Ursula racing division’s leader have expressed interest in the Le Mans Prototype (LMP) series racing, and with the support of the management, things initially went smoothly. But the impending economic downturn have caused massive losses on the company, and to cut costs, the LMP projects had to be scrapped. 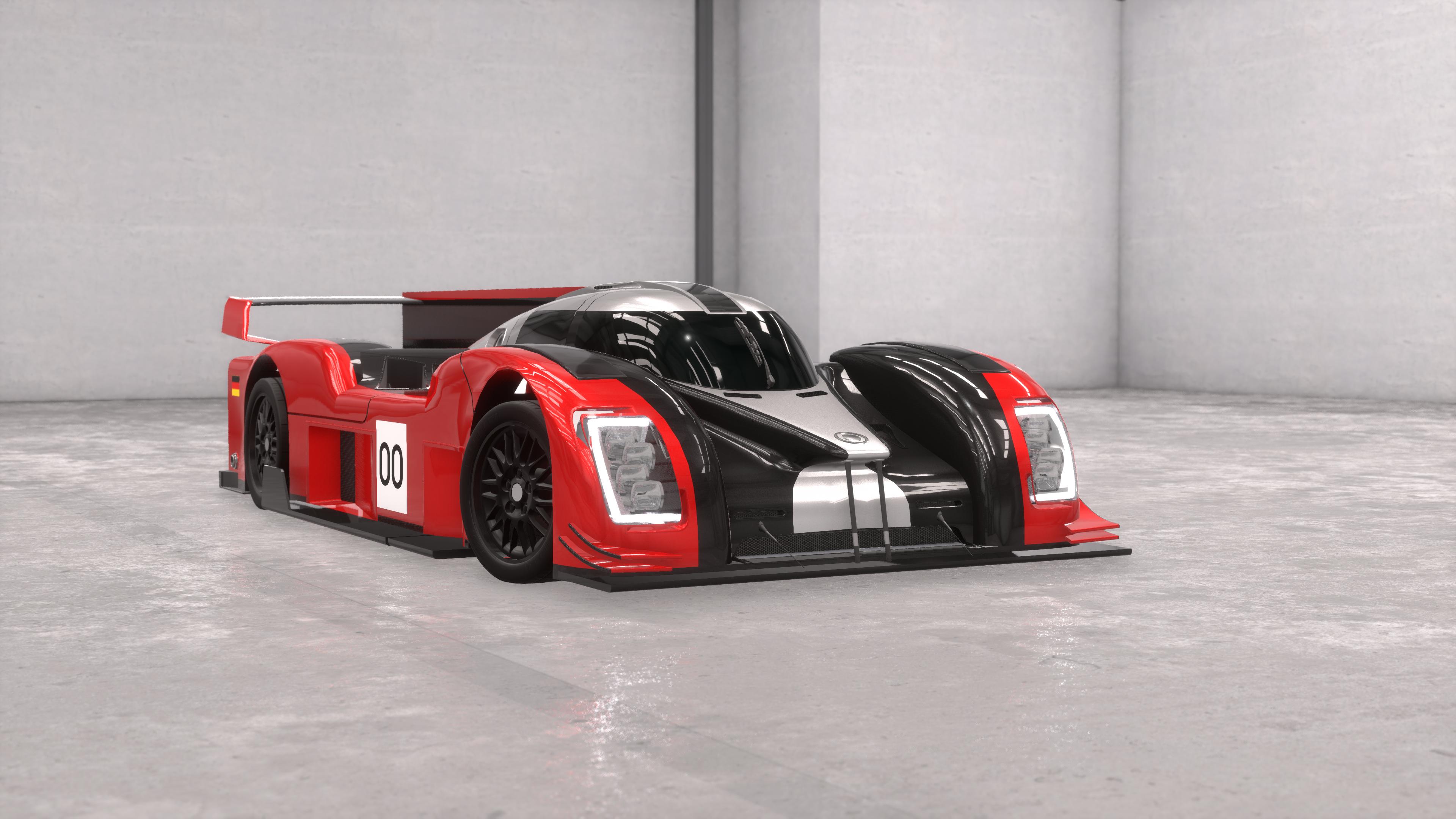 In early 2012, with profits returning to pre-recession levels, the company decided that it’s LMP projects will be resumed, and tailoring it’s entry to the upcoming 2013 FIA WEC season. Later in June, the company has established Ursula RSR Racing, with several famous racers and expert engineers under the team, as the company’s official WEC team. With all efforts, the finalized vehicle was showcased in a special event in Berlin on January 2013, with plans for LMP racing has confirmed at the same time.

The RSR-1 is an all-wheel drive hybrid LMP, sporting a twin-turbo 3.2 V8 and a hybrid motor, with it’s power controlling all of it’s wheels for maximum traction and handling. At it’s peak, the LMP racecar can go up to 350 km/h while producing more than 1000 kgs of downforce, and despite it’s brute it’s only a 980 kg vehicle thanks to a heavily engineered carbon fiber chassis. 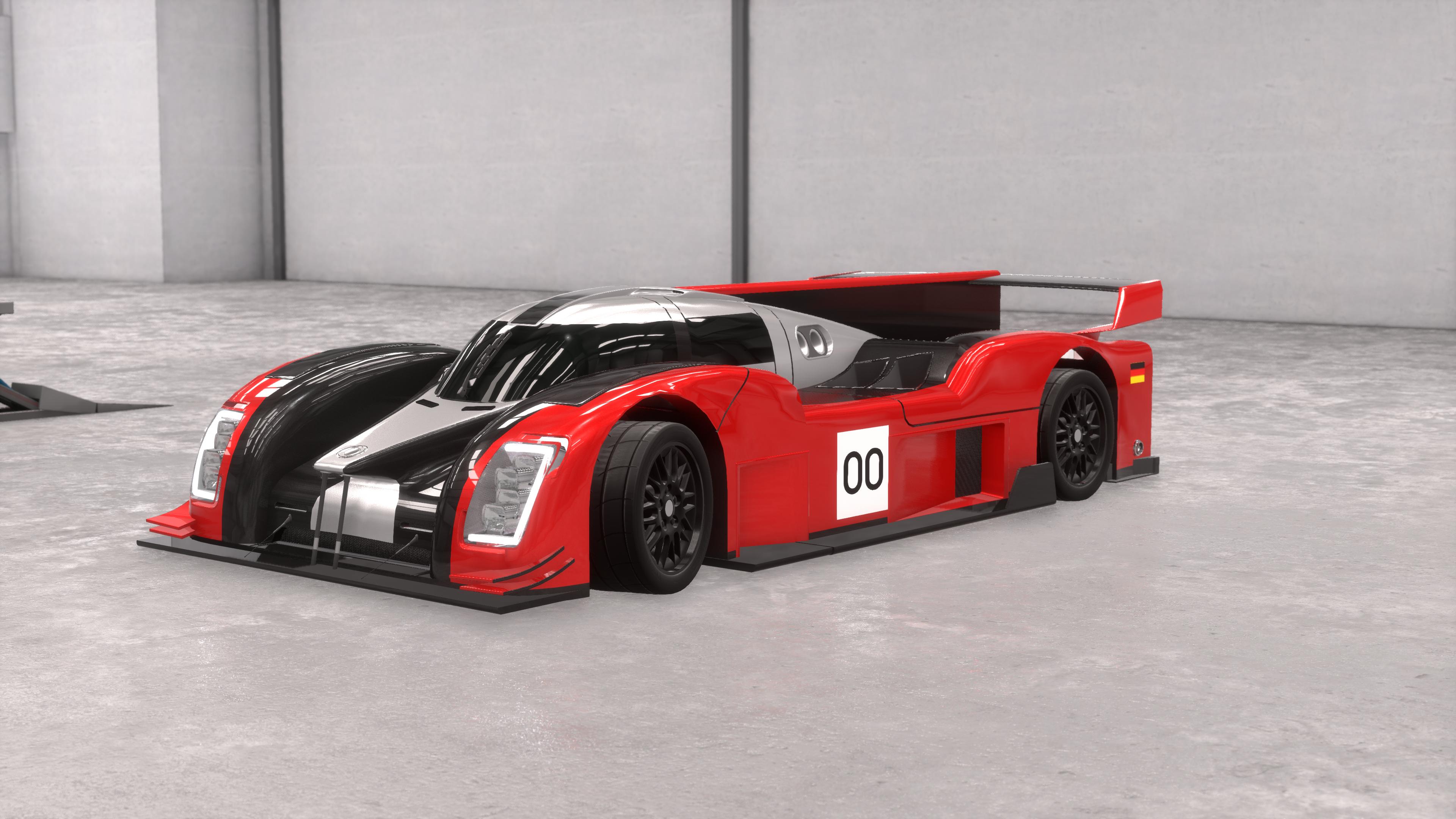 The RSR-1 was finally debuted in the 2013 season under the LMP1-H category, starting with 6 Hours of Silverstone race that year. Ursula sent 3 vehicles to the race, and in that day the team unexpectedly won the race with a 1st, 4th and a 5th place in it’s maiden race. And Ursula RSR Racing went on to be dominant on the season, racking up several race wins, and ultimately winning the season with 180 points and several podium finishes. 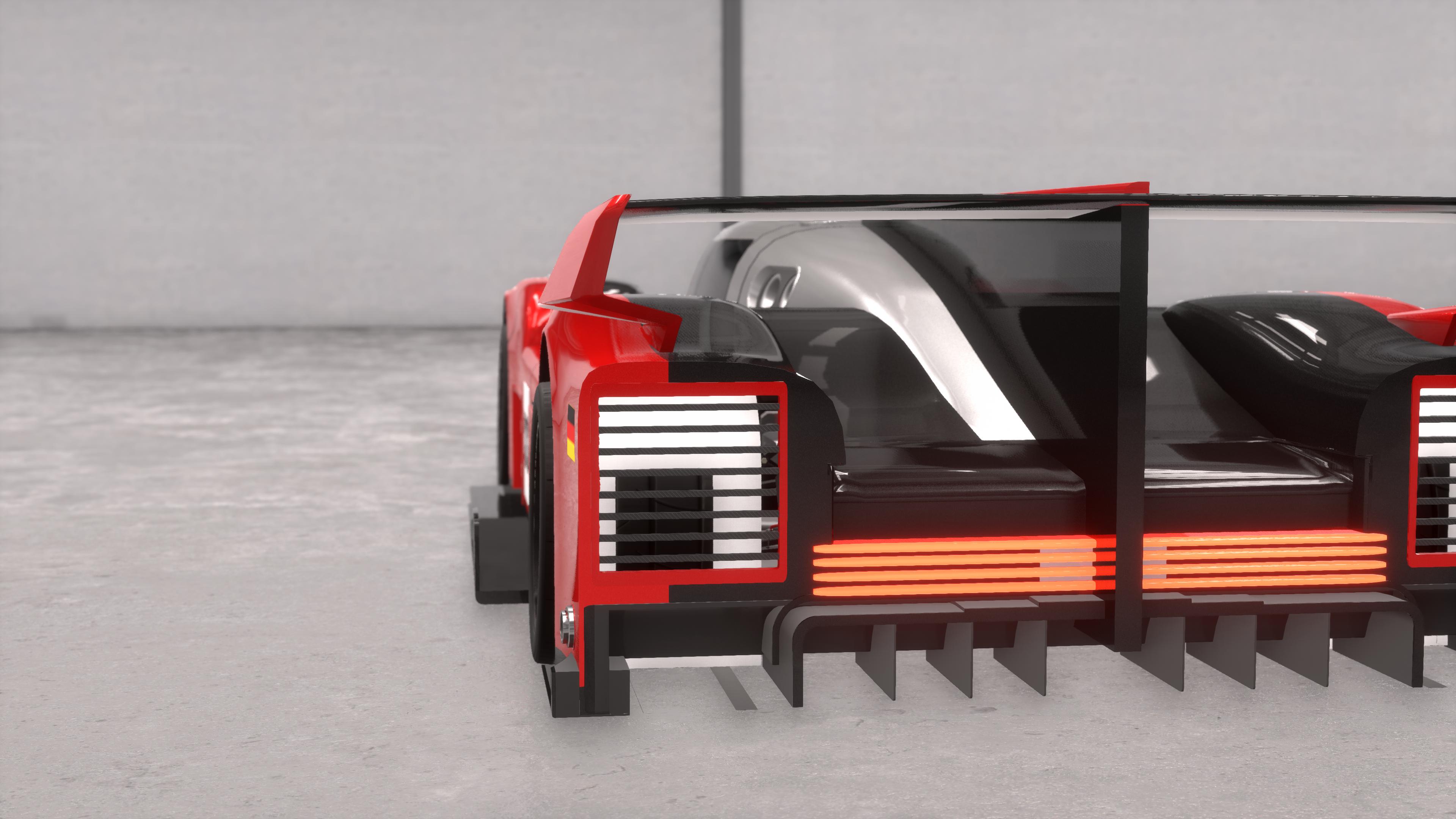 In 2014, a revised RSR-1 was released for the 2014 season, with it’s original 3.2 V8 now generates 600 hp, a 50 horsepower boost compared to the 2013 season, several aero and handling improvements and a revised suspension to give the vehicle a more stable ride. Like 2013, the 2014 season is also proved to be another good year to Ursula RSR Racing, as the company proceeded to dominate the season as well. 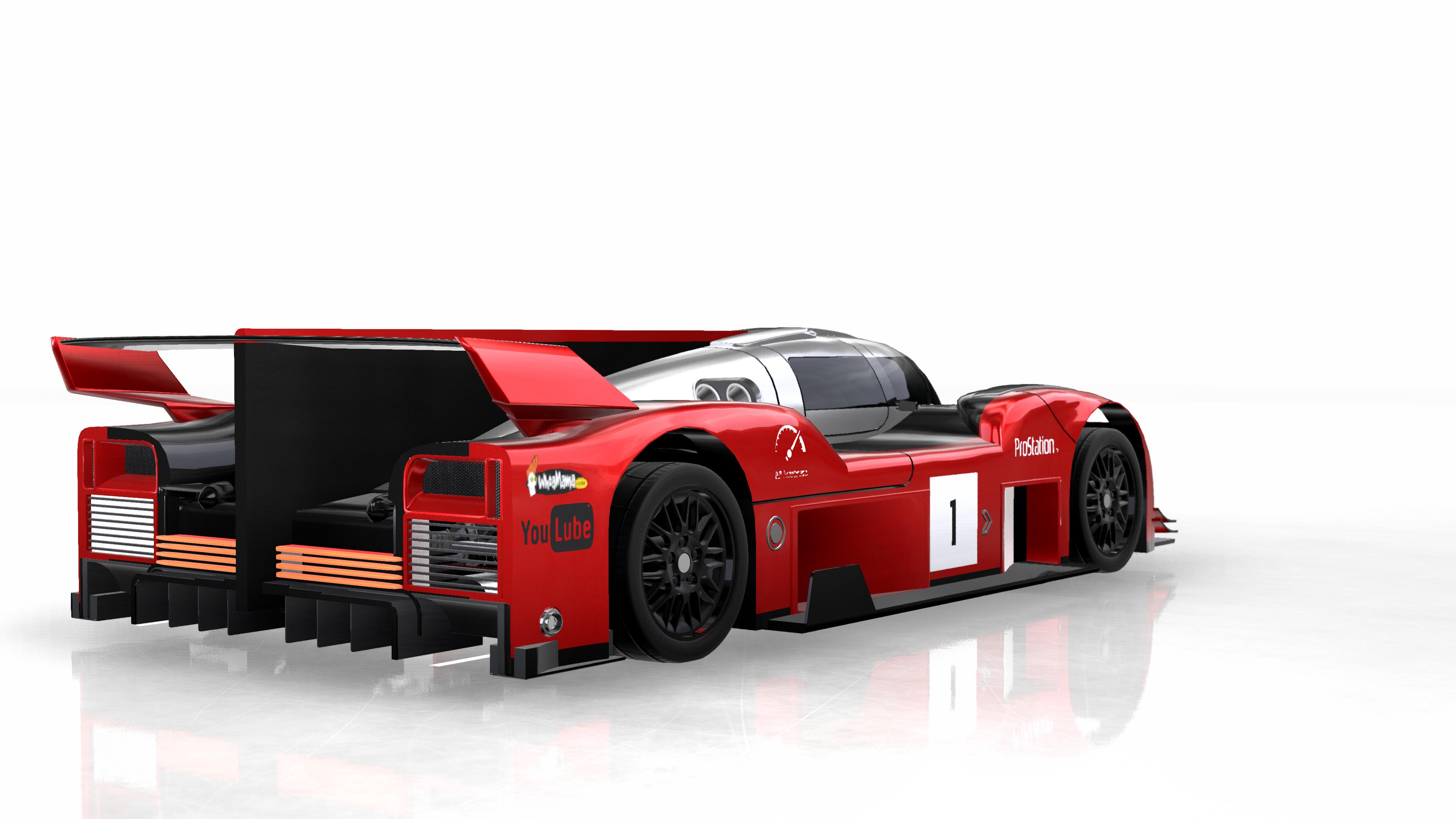 Shown here is the actual race vehicle for the 2016 season

2015 marks another victorious year for the team as the improved RSR-1 came on to be another massive success, especially in the Le Mans 24 Hours race, with British racer Tom Malroy broke the fastest lap record, beating the last record by 4 seconds. It was a bitter sweet victory, however, as the team had it’s first (and only) loss in 6 Hours of Fuji race, where 2 of the vehicles DNFed due to a crash and another one only got a 11th place, marking a massive loss of the team. 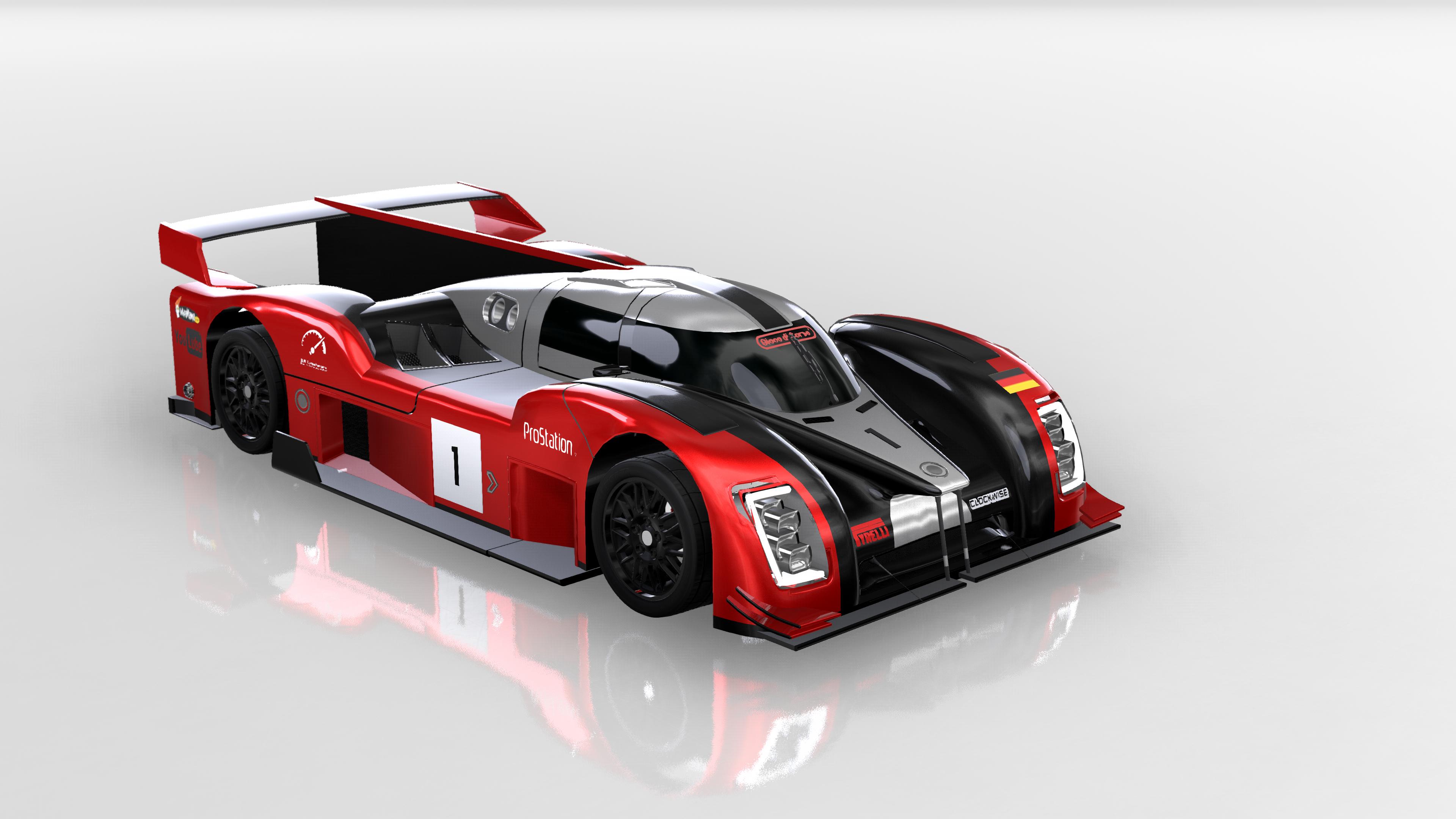 The proceeding season is still under the dominance of the RSR-1, now a 1000-hp all-wheel drive machine, and it went on to make 2016 the 4th year in a row of Ursula’s championship wins. But when things is still going well, a shocking news has somehow confirmed in Bremen: Ursula announces that it’s WEC program will come to an end as the races didn’t help the company’s profits, as well as to make the team focus on Formula E and other events. This decision, marks 2016 as Ursula’s final year of WEC domination, after more than 20 race wins, 4 constructor championships and 3 driver championships on all 4 seasons. 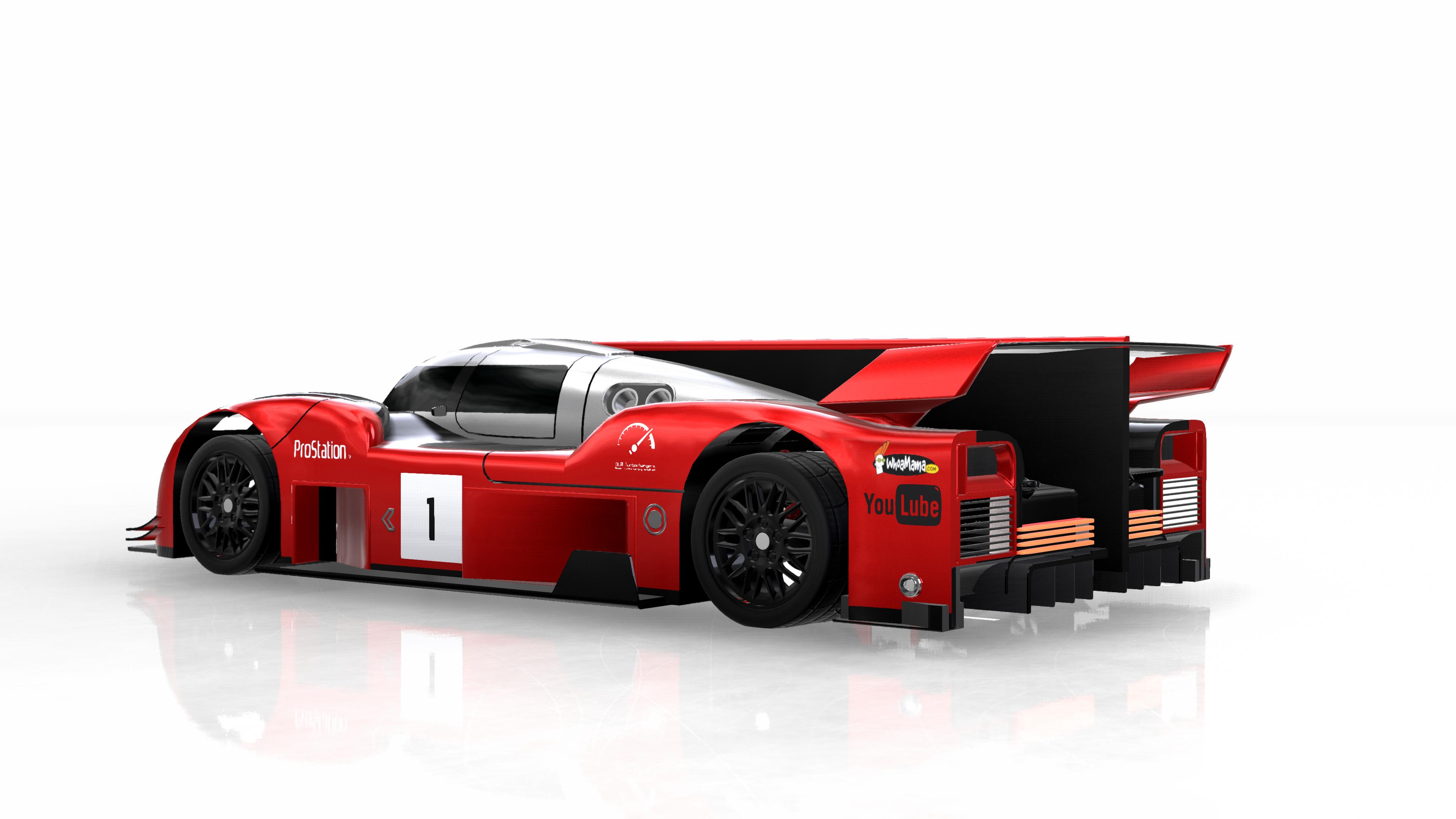 All generations of the RSR-1 is currently showcased on Ursula’s museum in Bremen, and the car is still shown in several major events as well.

And with the recent confirmations of Ursula’s return to the championship next year, hopes of the new vehicle being the true successor of the RSR-1 is still a possibility. But the success of the RSR-1 makes it truely a worthy LMP legend, just like the greats of the past.

This is just Porsche in a nutshell now is it

Worldwide Sales for the Year 2019

BREMEN: With a total of 2,721,880 units sold, 2019 total sales have dropped 1.3% due to uncertain economic conditions. However, thanks to a growing consumer base, China remained the major factor of the automotive sales with a 7% growth, making 2019 the 7th consecutive year of Ursula’s leadership of the luxury vehicle market.

For the year 2019, about 922,430 units were sold in this region. Germany, it’s home market, retains the largest European market of Ursula AG, with sales accounting for 37% of the total region sales, followed by France, United Kingdom and Italy. Beyond that, Ursula have achieved sales records on markets such as Switzerland, Hungary and Bulgaria. However, with total sales dropped 1.4% compared to 2018, due to increased competition and other challenges, 2019 is quite a challenging year for Ursula AG in Europe.

With more than 1,013,880 units sold, Asia Pacific remains the largest market for Ursula AG. China is currently the sales leader of the region, with 640,320 units sold on that region, a 7% growth compared to 2018. Japan, the second largest market of the region also accounted a 3.3% growth, and sales records were seen in Thailand, Singapore and India.

The Americas region have recorded a 350,322 units in 2019. As usual, the United States and Canadian markets are the most important markets on this region despite slower sales, accounting a total of 334,330 units sold, with the United States accounting 90% of the sales of the two countries. Ursula have maintained the position of the top luxury vehicle markets in Canada, as well as Brazil and Argentina.

About 14,220 units were sold in Australia, a 3.1% increase compared to 2018, marks the year 2019 a new record year for the market. Sales of other regions are also increasing in a steady pace, especially in Africa and the Middle East.

To improve sales and expand markets, Ursula AG has recently invested heavily on electric vehicles and SUVs due to rising demand. For this, Ursula has opened a new EV sub-brand, Ursula eVision and creating newer, more lucrative models such as the Ursula FX1 SUV to keep up with this demand. 2019 is one hell of a ride for Ursula, and we can assure that 2020 will be another splendid year as well.

sidenote: I didn’t left this place or something, just becoming too busy rn