Agreed. My dad’s Land Rover has black leather seats and since he always forgets to put a sunshade in the windscreen, every time we go out to it (especially in summer) the dashcam has fallen out and the seats are burning hot. Much prefer the blue cloth in my Fiat.

That is the reason I would never want a convertible with leather. But in my Hyundai Sonata I don’t have that much of a problem with the leather seats. The only problem with those seats is the leather takes a lot more care to stay in a good condition compared to cloth seats. Even despite the previous owners (second owners, from 1998 to 2017) using an overlay, the leather got damaged on the drivers side. While the cloth seats in my Accent definitely have been used more extensively and don’t show any wear.

Oh and while I brought up the topic of convertibles: I would also never want a convertible with A/C. I see so many convertibles on perfect/hot days with the roof up, windows closed and blasting the aircon. Meanwhile I have a convertible without a folding roof and even for short trips on clouded days I take the time to take off the roof. Even though it costs me about 2 minutes to get the roof off and probably 3 minutes to put it back on. I really don’t get why you wouldn’t put the top down on every drive if it’s just pressing a button or folding the thing down.

Well I would definitely want A/C in any car when it’s something like 30°C/85°F outside.

As for the leather, I’ll see if my car will change my opinion on this with its seats

I have a 2010 Ford Crown Victoria Police Interceptor that I purchased for work. It’s tinted out and clean, so it looks like it could still be in service. I love watching people fly up behind me only to jump on the brakes and engage in the “is that actually a cop” game.

I also usually have more fun driving that CVPI than my Mustang.

Modern turbocharged engines feel dull, even in many performance models like the Focus ST. I really don’t care for the Focus’s driving dynamics despite it being the closest thing to a 3rd gen Mazdaspeed 3 there is (me of course being the proud owner of a 1st gen). One of the things that makes my 1st gen so fun is the feeling of boost just throwing you back in your seat on hard acceleration. Even in high gears at 80 on the highway, it pulls strong. I just don’t feel that with newer ones shy of maybe the RS (I’ve never driven one, but I’ve driven the ST). Even the Ecoboost Mustang feels anemic stock. Same for the VW GTI, but that car was tuned more for comfort than than the Speed3, which is definitely more on the firm side. I don’t mind, but I can see why others would.

I generally speaking agree with this sentiment. Definitely there is a problem with modern cars being too quick to have fun (Chris Harris once explained something along those lines why he loves his 2CV). For my daily commutes I used to have vastly more fun in my 120HP Mazda MX-5, than I ever had in the city in BMW M2, despite M2 being a much better car in almost every aspect and despite M2 being one of the less powerful modern sports cars. I just could push the car much longer, without having to let go after 3 seconds.

Having said that, I don’t agree that the best cars were in 1990s. For example the modern MX-5 ND, is arguably the best of all of the generations. I guess it’s only weak point is the electric power steering. Also a lot of people argue, that BMW M2 is the best BMW of all times. I would agree that on average, sport cars from 1990s were more enjoyable to drive. Too many cars are too ridiculously over powered/grippy. Most grew larger and fatter over time. But at the same time, the same trend making cars larger and larger created more room for new smaller “baby” sports cars from the same manufacturers (Boxster/M2/Polo GTI/Toyota GT86/…), that are filling the gap. If you look closely, you will find them. It’s hard, they are far between because of things like manual transmissions are dying, but it’s still possible. And the ones you find, will IMO be more enjoyable than even the best of cars from 1990s (% lack of the classic car nostalgia, which is of course a good enough reason on it’s own to love older cars).

M2 being one of the less powerful modern sports cars

A minor thing, but I can’t agree with that - there are such cars as A110, Supra, base 718, (or heck, even base 911 is less powerful than the top M2s) and a bit older Toyobaru and 370Z. And of course loads of less powerful coupes, like the normal 2-series, which might be counted as sports cars too.

Yes, I fully agree, there are even less powerful sports car there

That’s why I wrote “less powerful”. M2 is definitely below average, and it’s I think the least/one of the least powerful from the true 4 seater sport cars (911 is 2+2, base 2 series I wouldn’t call a sports car). But that depends how you would define a sports car etc…

I definitely disagree on the new ones being more fun than the old. That simple analog feeling is definitely much rarer now than then. Combine that with typically increasing weight wiping out much of the feeling of tossability for anything under $40k short of a Miata or Toyobaru (in the US at least). Which is a problem if you plan on hauling cargo or people on the regular. I like my Speed3 because it’s fast and fun without sacrificing practicality. I’ve packed the hatch completely multiple times and have even ratchet strapped large items to the roof. I lose so much usable cargo space going to a coupe that it’s not a viable (or preferable) option for me.

I have a soft spot for cars that suffered from the dreaded “middle child” syndrome when new, but are looked upon much more favorably nowadays. Two of them are now rightfully considered to be among the best drivers’ cars of their generation - and are still my favorites to this day:

BMW M3 E36 - Sandwiched between the E30 (a homologation special) and the E46 (progenitor of the wonderful GTR, CSL and CS special editions), the E36 is nevertheless as worthy of the nameplate as either - and a better used buy to boot. It was the first M3 to be built in right-hand-drive from the factory or to be powered by a straight-six engine (unlike the E30, which was strictly LHD and four-cylinder only), and was the only M3 to be built as a four-door saloon until the E92. Later, in 1995, it received a mild facelift in the form of an Evolution version with a 321-bhp 3.2-litre engine mated to a six-speed manual gearbox. US-spec examples were detuned to 240 bhp, but were still fast, agile and engaging enough to be a tempting proposition.

Here are a pair of buying guides for the E36 M3 that show us why it’s the M-car bargain of a lifetime: 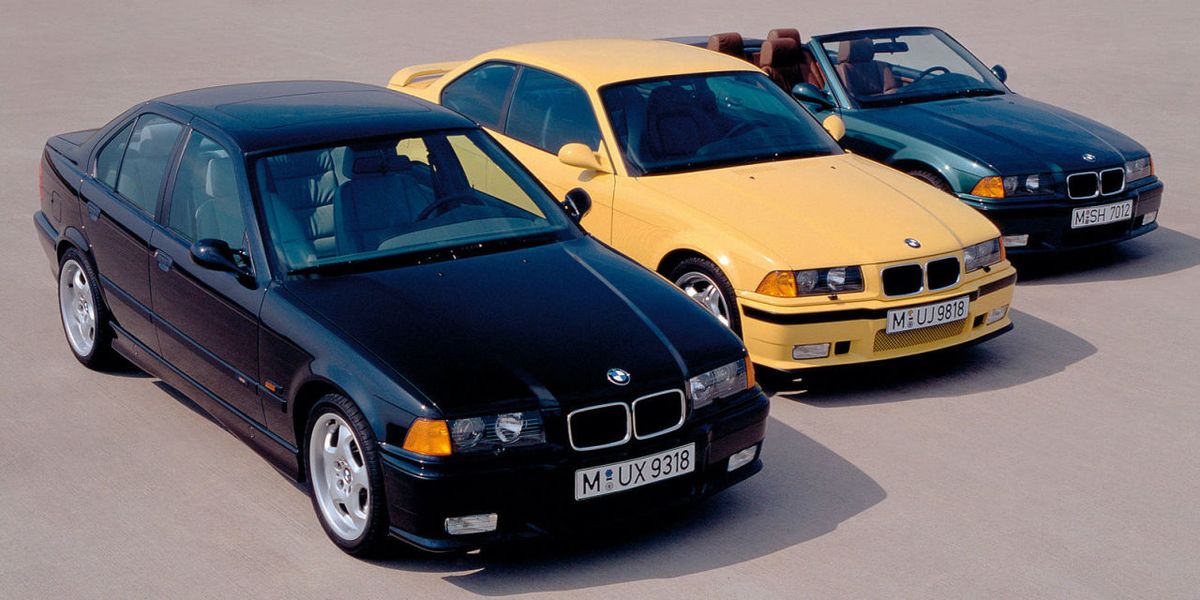 BMW E36 M3 Buyer's Guide: Everything You Need to Know

Learn what to look for, what to avoid, the common maintenance problems to watch out for, and which aftermarket mods are popular. 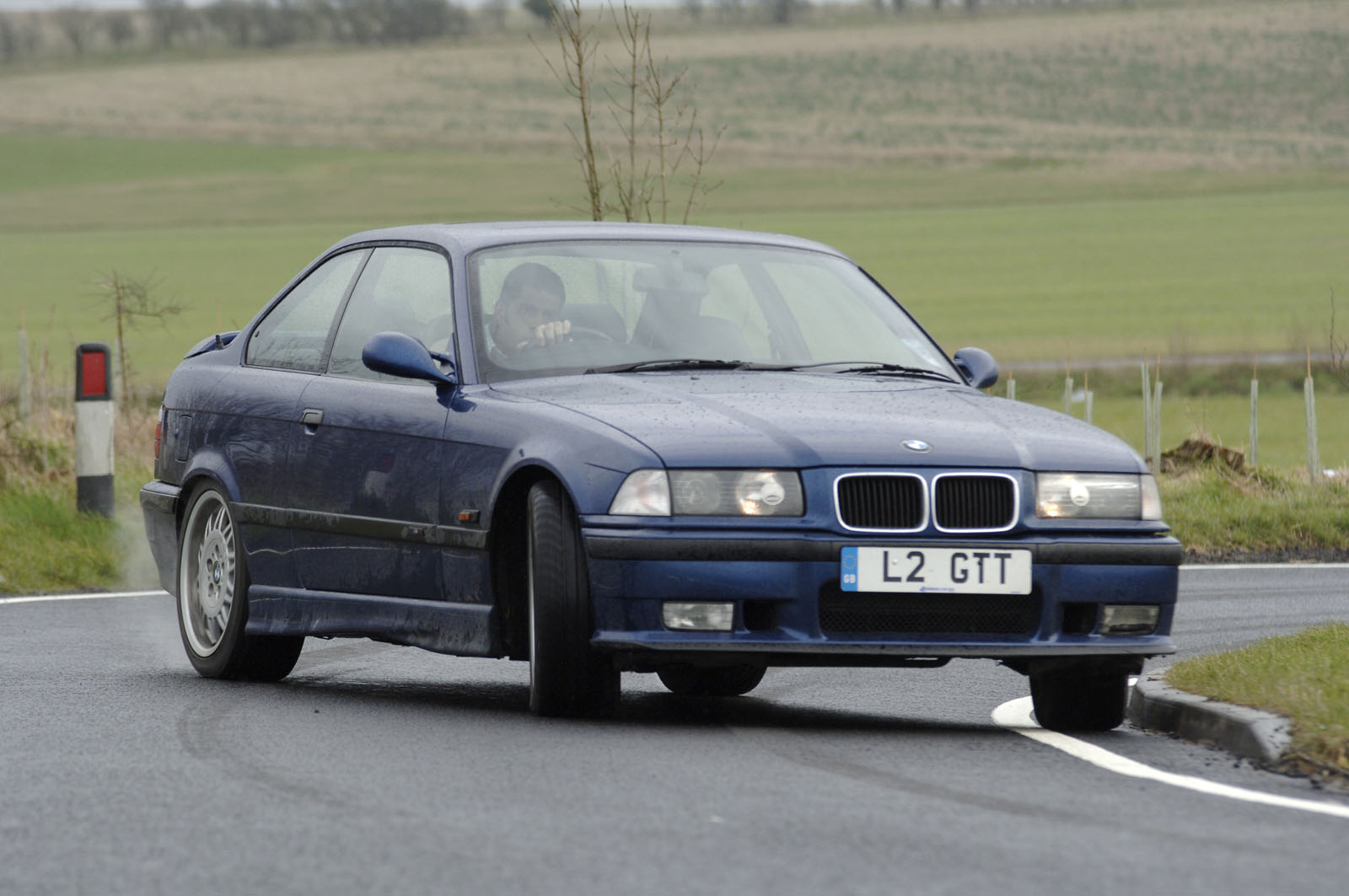 The E36-gen M3 is overshadowed by the one that came before it and the one immediately after. But that makes it a relative bargain

Like all other generations of the M3, the E36 had its fair share of special editions, such as the GT, Imola Individual, and Lightweight, the last of which is based on a US-spec M3. However, the rarest and most extreme E36 M3 of all is the R, developed by Frank Gardner for use in the Eastern Creek (now Sydney Motorsport Park) 12-Hour endurance race - only 15 were made for the Australian market, and although it never raced in anger, it still deserves to be considered the Holy Grail for BMW M car collectors around the world, such was its potential. 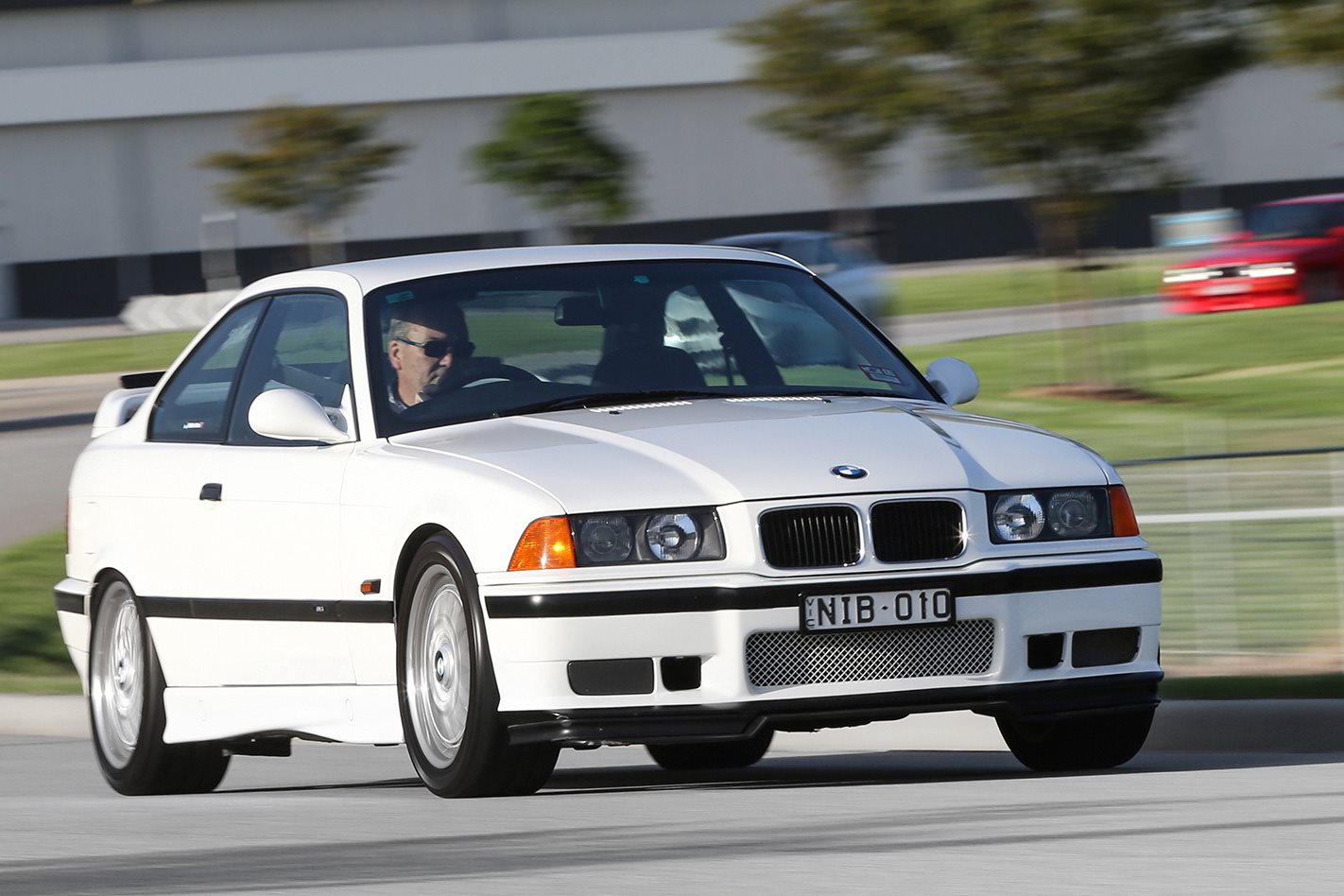 The need to battle Mazda and Porsche on Aussie racetracks led to the creation of the rarest M3 of all.

Now for something that sits at the opposite end of the used performance car market:

Ferrari F50 - On paper it’s not much faster than its predecessor, the F40, and its aesthetics are not quite as resolved, even with the removable targa roof in place. Nor is it as dramatic as its immediate successor, the Enzo. However, it is the last truly analog Ferrari, full stop, with no power steering, anti-lock brakes or electronic driving aids - it’s just you and the car. And what a car it was - and still is!

Above: An F50 in Rosso Barchetta. I think it looks better with the roof on for some reason.

Powered by an enlarged version of the V12 from the 641 Formula One car, bolted directly to the carbon-fiber monocoque (another Ferrari road car first), and mated to a six-speed manual gearbox, this was, and still is, one of the purest, rawest and most thrilling supercars ever made - and one of the best-sounding to boot. Unsurprisingly, used values have recently gone through the roof, and deservedly so. 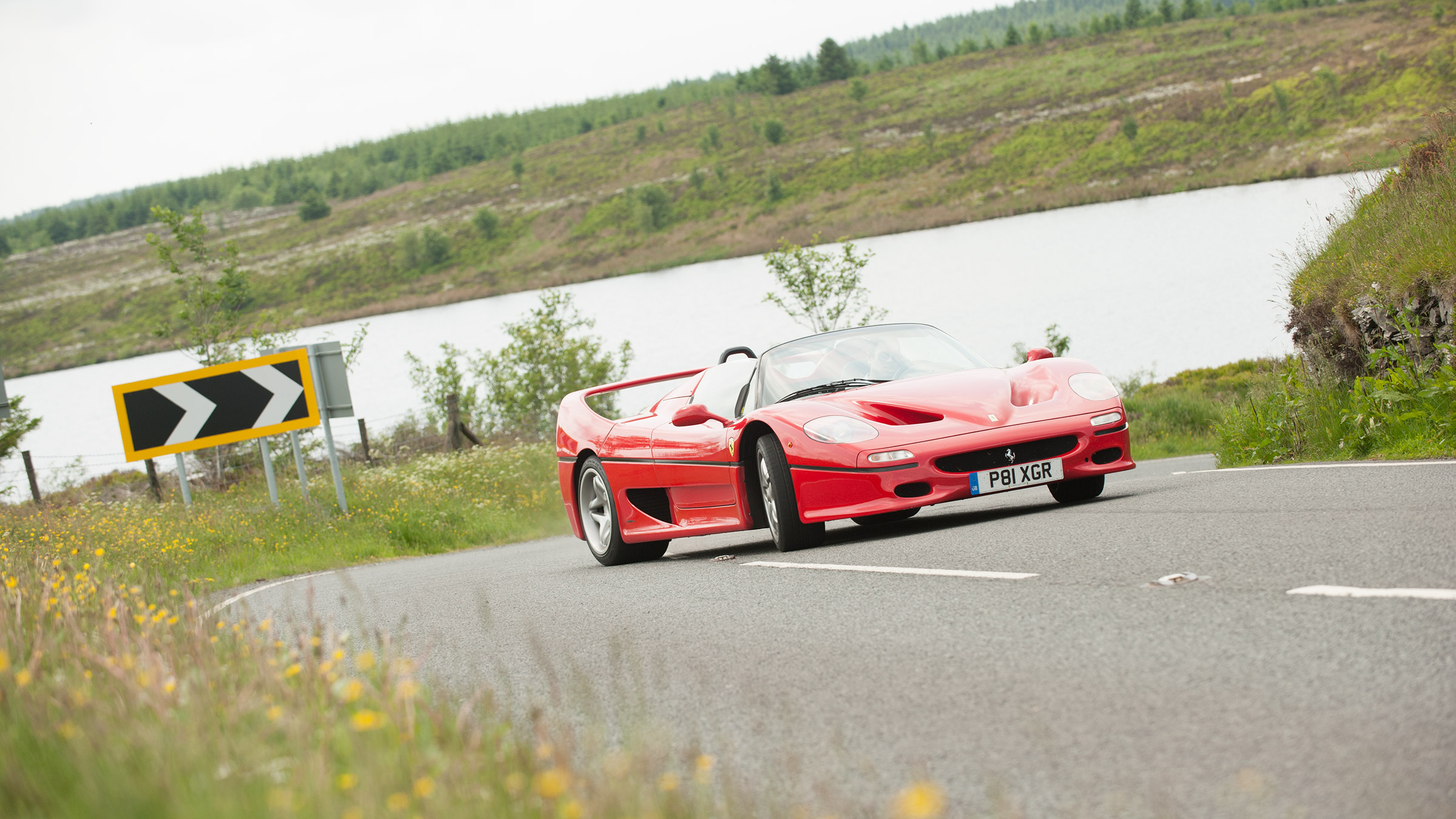 With a Formula 1-derived V12, a manual gearbox and a carbonfibre chassis, the F50 was cutting edge in its day and is now revered as one of the ultimate, if not the most beautiful, supercars ever made

There were even plans for a racing version, the F50 GT, although only three were made before the project was canned due to its obsolescence in the wake of its rivals introducing a whole host of purpose-built GT1 cars that were far faster than any and all road car-based designs, which the F50 GT would have been:

For decades the premier sportscar and GT racing series had been the eponymous World Sportscar Championship. Sadly, the introduction of compl

Stringent modern legislation means that we will certainly never see cars like these two again, and with analog purity now an increasingly rare commodity, both of them are the perfect antidote to paddle-shifted, turbocharged, electronically-assisted modern machinery.

I’ve never had anything against E36 M3. I’ve never driven E30 and E36 M3s, so I can not compare them in that regard, but I can easily imagine that E36’s engine is a huge upgrade compared to E30.

The biggest downside of the E36 is that IMO it’s the worst looking M3 (it doesn’t mean I do not like it’s look, just that I like other generations more). At the same I have a soft spot for any underrated generation of a given car just because it’s so much better value. Another such example for me is Porsche 996.

About the F50 I couldn’t agree more. I have never understood why this car is so despised compared to F40. Because it’s a bit slower? Meh, I could live with that in an exchange for naturally aspirated engine…

My current guilty pleasure would have to be a 2017 generation Suzuki Swift Sport, pre-2020 upgrade to a hybrid powertrain. So, the 1.4L turbo i4 Boosterjet engine has 138hp compared to the 2020’s combined electric + ICE power of 128/9hp. 6-speed manual, manual handbrake, plenty of modern comforts/safety features, weighing in under 1000kg (970kg to be exact), and most second-hand examples can be found for roughly £12k to £13k.

Looking to upgrade to one in the very near future once I start work, specifically in the Champion Yellow.