Really nice car, though one can’t help but feel that the front end needs some more chrome

I would agree with you on that, but unfortunately the other variant of that grill would just give TOO MUCH CHROME, and the little chrome strips can’t line up with the edges because they just “floop” into the grille, haha.

Hmm, really nice car, but I doubt that it would sell well in Europe under the Zenshi brand - it’s not a premium one, and the biggest sedans sold in Europe under such brands are in the middle class (D segment), and even that’s partially due to the fleet sales. That’s why Honda, Subaru, Nissan aren’t selling any D segment cars in Europe anymore, and Toyota just facelifts their Corolla-based, 8 year old Avensis and doesn’t plan any successor.

PS By “Europe” I mean the EU markets - Russia etc are another story.

The Avensis is Corolla based? Wouldn’t it be a Corolla then?


This indicates that it is. The same wheelbase and similar dimensions suggest that too. It seems like the current Avensis is just a fancier Corolla.
Awildgermanappears 2017-05-24 15:12:43 UTC #68

I am still surprised a giant ass V6 van like the Alphard is just a fancier Corolla.

Alphard is a different car with very different dimensions and different wheelbase. Avensis and Corolla use the same wheelbase, same basic body style, mostly the same engines, the same drive type and nearly the same external dimensions. I see no reason why it would be impossible or even unusual for Avensis to be Corolla-based.

That’s the magic of platform sharing.

You know if you want to be successful in europe all you really need is Diesel engines and wagons.

The Zenshi Raizan X1 revealed itself at the 2017 NYIAS auto show, catching people’s attention with it’s good looks and impressive performance. Being the third production supercar Zenshi has made, with the X being 2nd and the ZX being 1st, the car went through a 2-year development plan devised by Zenshi’s upper-level development team, consisting of the head designers in Zenshi’s headquarters, along with the engineering team from Zenshi Motorsports Division (ZMD) under the name of “Project X.”

Over the years, the Project went through various design plans, such as using a front engine platform (which was scrapped immediately), making use of a 7-Speed Manual (which was then switched out to sticking with a 6-Speed AvanTec for performance purposes), and implementing a twin turbo 5.6L V8 engine similar to the one used in the GTZ (which was eventually switched to making use of a twin turbo V12.). After years and years of arguments and conflicts, the unionized team had finally come to an agreement over what the machine would end up being: The one you are seeing as of right now.

Upon seeing the exterior of the car, one can clearly see the work of the design team’s “Shinka Design.” The final version of the car was given a few changes from it’s NYIAS version, notably seen at the rear, which, in comparision, is louder than the subtle look it once had. Technology is to be found quite a bit in around the outside of the car, notably the three stage active aero wing on the rear, which can widen upon reaching a specific speed.

The interior wasn’t given any neglect, though. The dash is carefully crafted to follow the flow the exterior possesses, with every sort of control focused on the driver. The interior is lined with leather from the doors to the dash, with alacantara inserts on the bucket seats and the headliner. The hard materials within the car are a mix of carbon fiber and aluminum, ranging from the A/C controls to the paddle shifters. Not much infotainment is used within the car (as the car was primarily made for pure driving pleasure), but there is standard satellite navigation, as well as an 80 GB hard drive for storing music plus a standard Nakamichi premium sound system.

Zenshi’s supercar is powered by the KSZ40-GDA2T, a 4.0L Twin Turbocharged magnesium alloy V12, which is related to the Gundan’s KSZ45-GDA2T. The engine, which was developed by ZMD, is a powerful lightweight one, with power rating over 840 HP and 667 lb-ft of torque. That, combined with Zenshi’s quick-shifting AvanTec transmission and high-tec SM-AWS system allows for the Raizan X1 to propel to 100 KM/H in 2.2 seconds, with a top speed of 360 KM/H.

The Raizan X1 may as well be Zenshi’s best production performance car made by them to date, and it shows with it’s graceful looks and aggressive performance. 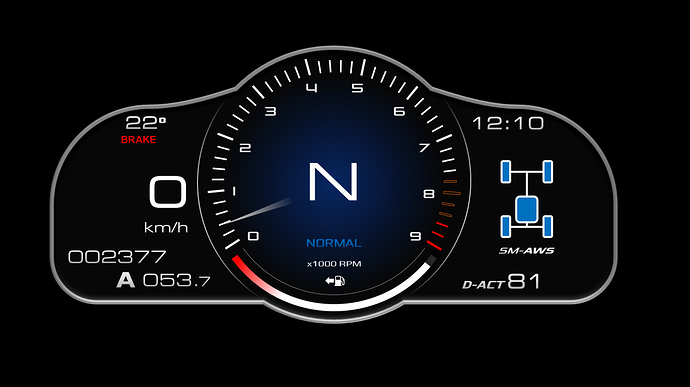 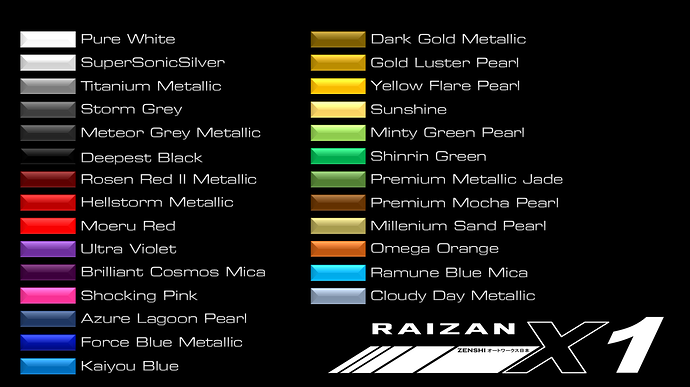 As befitting a hypercar, it looks and drives like absolutely nothing else - I would like to see it lock horns with other cars in its class!

I want to cry over how nice that rear end looks.

on the Automation Test Track.

This is pretty damn impressive.

This is really cool. We can see the JDM spirit in your cars while being elegant at the same time. Great job! 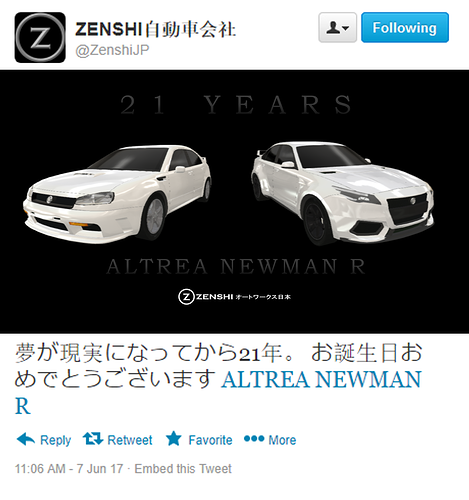 "Twenty one years since the dream was made a reality. Happy Birthday
ALTREA NEWMAN R"

The AZ20 Altrea made it’s debut in late April of 1996. Larger and more spacious than the AZ10 Altrea, the 2nd generation was developed with great care with these changes coming to mind. Despite this, it still kept it’s title as “Affordable Sports Sedan” well.

Zenshi utilized a slightly lengthened version of the Grandea’s platform to accommodate the 4 door setup, as well as balance overall vehicle rigidity. Compared to the AZ10, the AZ20 as a result felt more genuine and authentic in terms of styling and driving dynamics.

The engine offered in the AZ20 was the then-newly developed LZ3-ME 2.5L Inline 6 engine, making around 200 HP. The LZ2-MTE engine that was from the 1st generation’s GTS-25T model was carried over to this generation’s GTS25T trim. A slew of items were featured on the car, such as AWS 4-wheel steering, as well as an AWD model, which only was seen on this generation.

The car was released in the US as the Arum.

The most notable version in this generation, however, is the Newman R. Being the first on in the series, the Altrea Newman R was developed in late 1996 not only as a homologated version of the Altrea touring car, but also as tribute to one of ZMD’s well renowned test drivers, Thomas-Mathieu Newman, who passed away in 1995.

The Newman R, compared to the regular Altrea, was completely different looking from the outside, possessing an aerodynamic bodywork that gives the car a rather aggressive, rowdy look. In 1998, the regular Altrea recieved a facelift that made the front resemble the Newman R a bit.

The engine powering the AZ20 Newman R is the LZ3-MTE, a turbocharged version of the LZ3-ME making 276 HP and around 300 lb-ft of torque. With careful suspension and gearbox tuning from ZMD, it made for a rather quick family hauler.

Inside, the Newman R was given a load of items made from ZMD themselves, ranging from steering wheel, shift knob, and even the interior trim itself. The standard front seats were RECARO bucket seats, which, despite giving a spartan feel, made the driver feel more at control of the car when going in high speeds.

While Zenshi has already made groundbreaking cars before it, like the Grandea and the Axia CT400 Coupe, the Newman R revolutionized it further, showing the world that they can mean business when it comes to making a performance oriented vehicle. The Altrea continued on to be the midsize sedan that was different from the crowd, the one that you would be seeing today.