The third generation Mikli was released mid-2016 to replace the outgoing model. Shape wise, not much has changed from the first gen, it’s boxy shape being an “essential element” of the car.

The Mikli’s naming designation goes by ascending numbers, including facelifts. For example, the 1st generation Mikli went by the codename “MU1.” When it underwent it’s facelift in 2000, it became “MU2.”
The MU6 Mikli underwent some heavy design changes, with the front lights and grille now similar to the one seen with the Sport RS model. The main highlight with the 2017 facelift is the rear now bearing a similar design to that of the Magis and Altaris.

Since it first came out in 1997, the Mikli was rather different from the other mainstream Kei cars in that it utilized a sliding rear door instead of a traditional folding one. Zenshi believed that it aided in allowing drivers gain access to the second row with much hassle in situations like tight parking and so on.

G and GS trims utilized a naturally aspirated version of the LV06, the LV06GDA, which made about 57 HP. the GT and Sport RS trims use the newly-made LV06GDAT, which makes 63 HP and is much more efficient than it’s previous variant. All models have an option to use either a 6-Speed Manual or a 6-Speed AvanTec transmission. The Sport RS model utilizes an SM-AWS system, while the other models have it as an option.

Amazing work with that photoshop @ramthecowy, makes the Raizan look so slick!

I would like to point out that the image was originally in >4k res, and is available in that size

I would love a copy!

http://imgur.com/HqSujjo
Not sure if imgur will let you download the original 4417x2700px image

Yep, that works thanks!

###Review: Zenshi Altra Newman R
“Because whatever you do in life, you still want to be driving something that looks - and feels - like it just came out of NFSU2”

I like Newman tuned cars. I should know, my Nimessa tuned one has finally arrived. But before I pick that up, I’m test driving its bigger brother - the Altrea Newman R, and I’ve made an assurance that I won’t just divulge into talking about much a love the Nimessa…promise!

The Altrea Newman R is the vintage Addidas tracksuit of the midsize performance market. Everyone who looks at you while driving it knows you’re driving something fast, and that in turn, you want them to know you’re driving something fast. Some will call the massive rear wing and fat twin exhausts childish, but I feel they’re neccessary. This car’s aesthetic is one of the biggest selling points, and it has a youthful, shouty air about it incomparison to the loud-but-finnessed Bonham and the uptight, conservative Rennen. This one I have is in white too, which really hightlight the black plastic details. It looks awesome; far from pretty, but they’ve styled it just right in terms of what they’re trying to convey.

Step inside and - shock horror! - the interior is sporty. There’s a bit of leather hear and there, but this is clearly a lightweight interior that’s designed to hold you in rather than comfort you. It’s less well equipped than its rivals, and nor is at as comfortable. But something tells me these are all necessary sacrifices for its performance.

Hitting the road, we leave the West London dealership and blast down the M3 towards Hampshire in search of country roads. Quickly, you get the feeling that this is not a car that has been designed in the same mind as the other two; manual gearbox for one, all active suspension, 3.0l turbocharged i6 producing 422 hp. So, it’s less powerful, has fully active suspension and not DCT gearbox. It needs that active suspension though, as without it set in comfort mode, this thing is not comfortable at all. More sacrifices, it seems. At least that’s what I keep telling myself.

That engine is unusual though. It’s got VVT/L, so you’d expect the torque to stay fairly flat after the turbos kick in and to increase by the end of the rev range. But it doesn’t. In fact, I can’t actually hear any chance or feel any change the higher you climb, almost as if the VVT/L hasn’t actually been setup to adjust the valve timings, which, er, makes it a bit redundant. It’s not much of a problem, as the torque remains fairly consistent up until 6000 rpm, but why add in the extra complexity and weight of such a system if it isn’t going to do that much?

Off the motorway and onto the backroads around Basingstoke and Farborough. First thing I notice is how much I miss a manual gearbox. Second thing I notice is how tight this thing is. It’s razor sharp, superbly chuckable and so, so light. The weight balance is 52/48 F/R, so not quite as perfect as the Chaucer Brooklands estate, but the lack of those extra kilos makes such a difference. It feels taught. It feels precise. It’s wondrously rewarding in the bends. You know what I’m going to say next, because it’s what they say about all cars with manual gearboxes; it feels so involved to drive.

Thing is though, compared to the others, it is. It’s far more of an experience, and to be quite honest, far more exciting to drive on these roads. The acceleration is slightly off, at 4.1 seconds from 0-60, and you won’t get the hit with a sledge hammer feel of the Bonham, nor the power surge feel of the Rennen courtesy of its AWD, but it’s more engaged through the gears.

The only thing that lets this involved feel down is the all-active suspension. It does get a bit in the way sometimes, though after pulling over and pressing a lot of buttons on the dashboard, I did manage to get it as turned off as I could get it. But, that’s not something most owners are going to want to have to do, which is a bit of nuisance. But then again, it’s hardly comfortable in this mode, meaning having that active suspension is worth it to make it usable as an everyday car…just.

It also understeers a lot earlier than you’d expect. Not sure if that’s because the suspension is so tight that it ends being too stiff, or whether it’s the difference in wheel diameter between front and rear. That’s something that I reckon could be solved with aftermarket wheels, but I still feel it’s something that should have been dealt with a little better in the design phase.

Refinement then isn’t quite what you get with this car. It’s not that it feels rushed, just a little sloppy and uncaring. Then again though, such a sharp car is what we need to balance this market out, and there’s no denying how much it stands out against the other two. It’s a really different approach to such a car, and I like that. The real thing that gives this car the upper hand is its price; just $50k, much cheaper than its rivals. That’s not to say you should buy this car if you’re going to miss a high-end sound system, leather seats and lots of comfort, because it has very little of that. But, if you can sacrifice such luxuries in favor of that brilliant manual gearbox and stunning feel through the corners (once you’ve set it up properly), and you can forgive it the slightly odd engine setup, it’s wholeheartedly worthwhile.

This is the purest car I’ve tested so far in this class, and certainly the most exciting. It takes a bit of work to get the most of out of it, and good god, I wouldn’t recommend this if you need premium features. But as a performance machine, it stands out against the rest. Newman know how to tune a car (save for the slightly off bits of this car), and it feels like a much more natural performance machine compared to the other two, which, even though they are both brilliant, don’t feel quite as natural as this car does. The Newman R is the most logical progression of the Altrea, if you get what I mean, while the other two feel more like they’re being pushed to their limits (in a good way). If it’s a more fulfilling driving experience you’re after, the Altrea Newman R is the one to go for.

on the topic of the Newman R… 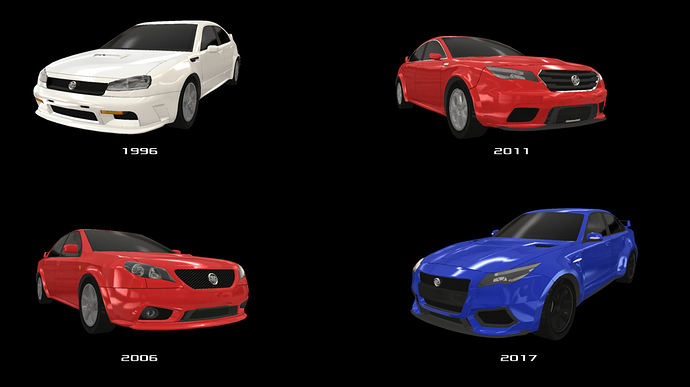 If only some of the brighter exterior colors available for the Mikli were offered on other Zenshi models… While an Altrea Newman R in Shocking Pink would look ridiculous, Brilliant Cosmos Mica, Zesty Orange Pearl, Top Banana and Matcha Green Mica all would suit its sportier, more aggressive demeanor very well indeed!

Brilliant Cosmos Mica is already offered in other Zenshi models! And some of the other bright colours can be found with other models as well!

Do you have any cars that could compete with a 205 mph stock car from 1970? I need a car that could historically compete with the 1971-1972 Calvinator Model C Lauriville before it got banned in 1972.

Zenshi found no point in making a high end in the 70s, as they prioritized driving emotion and pleasure over high speeds and 0-100 KM/H times.

So in other words,

This car was the Fastest till 1972 when it was banned. What was your fastest then?

give me your laptime around the ATT and I might answer.

And this is a stock car that was banned from being too fast?

While this is a slower lap time, I’d expect a stock car of sorts go way faster than a time difference of 17 seconds.

Bloody Japanese and their Motorcycle engines… 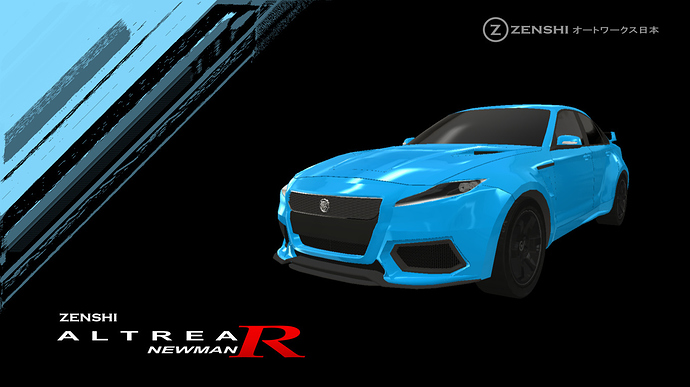 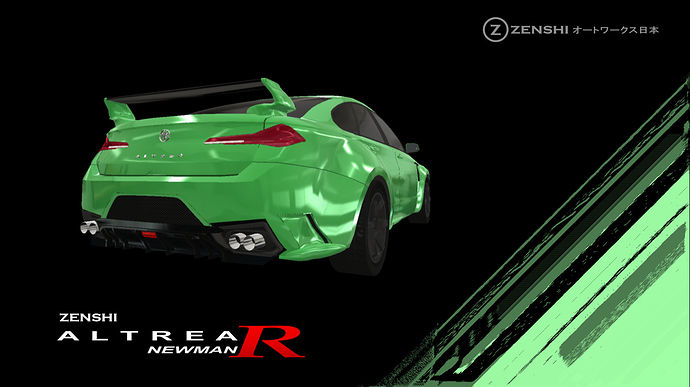 What is the better colour?